Methods: Ag NPs were prepared from AgNO3 using Tanacetum vulgare leaf extract polyphenols as reducing and capping agent. Further, the prepared AgNPs were studied by using characterization techniques such as XRD, FT-IR, UV-Vis and TEM. Additionally, the synthesized AgNPs were studied for their cytotoxicity against MCF-7 by an MTT assay.

Recently, nanoparticles are regarded as gifted materials in the fast mounting field of nanotechnology and science. Due to their outstanding size-dependent features, these materials are essential in several human and nature associated activities. Several chemical and physical strategies are reported for the effective production of nanoparticles. But, these synthetic strategies are less preferable because of their potentially toxic and explosive nature and cost effectiveness for industrial scale synthesis.

In contrast, the use of plant derived polyphenols, microbes and natural biomolecules for the NPs synthesis could be regarded as best substitute to chemical and physical methods for their environment-friendly nature [1-3]. A lot of scientific literature is available for the successful production of gold (Au) and silver nanoparticles (AgNPs) using natural sources such as plant extracts, yeast, bacteria and fungi [4]. For instance, AgNPs have already been synthesized by using Acanthe phylum bracteatum [5], Argemone mexicana [6], Aspergil lusterreus [7], Euphorbia hirta [8] and Euphorbia milii [9]. On the other hand, the AgNPs prepared by using Eclipta prostrata leaf extract showed a good larvicidal activity against filariasis and malaria vectors [10].

Conversely, the biosynthesis of antimicrobial Au and AgNPs against clinical pathogens was reported by Mubarak Ali et al. [11]. Although, various plant extracts have been already reported for the synthesis of AgNPs, no reports are present in literature on the use of Tanacetum vulgare extract. On the other hand, the biological, and anti-cancer activity of plant extract mediated AgNPs are not completely explored. Hence, it is necessary for the development of new green synthesized AgNPs with anti-cancer properties for the formulation of new drugs that can be used in the treatment of cancer.

Silver nitrate (AgNO3), Dimethyl sulfoxide (DMSO), Foetal bovine serum (FBS) 3-(4,5-dimethylthiazol-2yl)-2,5- diphenyltetrazolium bromide (MTT) and all other chemicals, solvents during the experiments were obtained from Sigma- Aldrich chemicals Ltd. Double distilled water was used for all the experiments as solvent.

The plant extract was prepared, by mixing 5 g of finely grounded root powder of Tanacetum vulgare in a with 50 mL of double-distilled water and then heated the resulting solution for about 60 min, on a water bath, cooled and filtered through a cellulose membrane filter paper to obtain a clear solution of extract.

About 10 mL of Tanacetum vulgare leaf extract was mixed with 5 mL of 2 × 10-3 M of AgNO3 in a beaker and allowed to stir for about 20 min at 27˚C. The initial formation of AgNPs was known by the turning of colorless reaction mixture to brown (also confirmed by UV-visible spectroscopy).

The breast cancer (MCF-7) cells were grown in a minimum essential medium (MEM), supplemented with 100 U/mL Penicillin-Streptomycin, 1% glutamine and 10% FBS which followed by incubation 5% CO2 atmosphere at 37˚C. A tissue culture flask was used to maintain the stocks.

An MTT assay was followed to measure the cytotoxicity of the prepared AgNPs and an aqueous leaf extract. In brief, the cultured MCF-7 cells at a concentration of 1 × 106 cells/mL were seeded on 96 well plate and the cells were exposed to AgNPs at various concentration from 0.5 to 35 μg/mL and left for incubation at 37˚C in 5% CO2 atmosphere for 24 h. A similar experiment is performed with aqueous leaf extract at different concentrations from 10-100 μg/mL. After the period of incubation, a 10 μl of MTT solution was added followed by incubation for 4 h in 5% CO2 atmosphere at 37˚C. Finally, DMSO solvent containing the dissolved formazan crystals was added and the absorbance of the reaction solutions was measured at 570 nm by considering a reference filter as 655 nm [12].

A Shimadzu 2400 UV-visible Vis spectrophotometer was used to record the optical absorbance of AgNPs at a resolution of 1 nm under. The shape, morphology, and size of the plant extract mediated AgNPs was studied by using JEOL JEM 2100 HRTEM instrument. Sample of AgNPs for HR-TEM analysis was prepared by diluting the nanocolloid with water and a drop of it is placed on the copper grid surface and left for vacuum drying. A successive selected area electron diffraction (SAED) measurement was conducted. The X-ray diffraction (XRD) pattern of the synthesized AgNPs was obtained by using an Advance diffractometer (Bruker D8) over 10 to 80 with a scan speed of 4°/min, step size of 0.02° and Cu Kα of λ=1.54 Å. Moreover, zeta potential and Dynamic Light Scattering (DLS) measurements for AgNPs were conducted using Horiba Nanoparticle Analyzer, SZ-100). The surface capping functionalities of the produced AgNPs were known by JASCOFT- IR spectroscopy instrument. A centrifuged and purified AgNPs powder was analysed under Fourier transform infrared (FTIR) instrument.

The initial confirmed of AgNPs formation is known by recording the UV-visible absorbance spectrum of the formed silver nano colloid. The optical UV-visible absorption spectrum of the Tanacetum vulgare mediated AgNPs is represented in Figure 1. It is found the presence of an intense surface plasmon resonance (SPR) absorption band at 410 nm indicated the AgNPs formation. 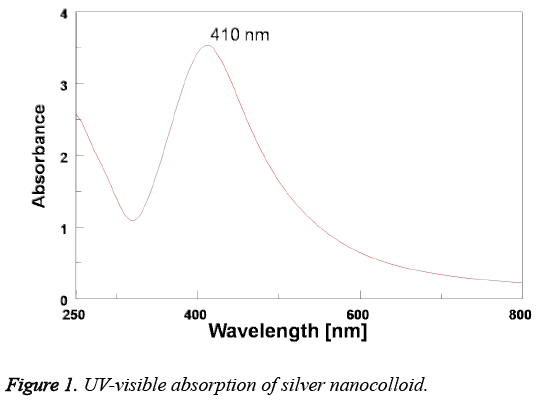 Figure 2 represented the XRD pattern of the Tanacetum vulgare extract induced AgNPs. From the Figure 2, it is found the presence of distinguishing diffraction peaks at 38.0, 44.3, 64.6 and 77.3 with characteristic indexing planes at (111), (200), (220) and (311) indicated the cubic AgNPs with crystalline structure. Moreover, the crystallite size of the plant extract mediated AgNPs is calculated as 11.8 nm using Debye- Scherrer formula. 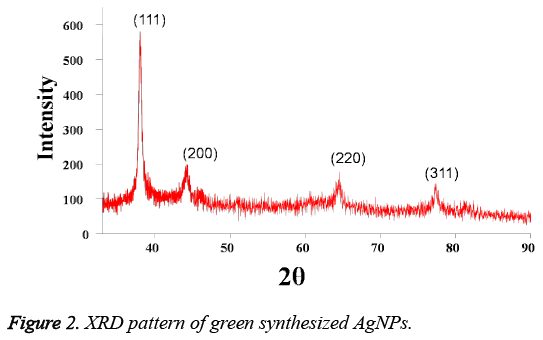 Figures 3A and 3B represented the HRTEM images of the prepared AgNPs. From Figure 3, it is found that Tanacetum vulgare extract mediated AgNPs are small, spherical and polydispersed in nature with an average particle size of about 10 nm. On the other hand, Figure 3C showed the SAED pattern, which signified the crystalline nature of AgNPs with diffraction spots that are well distinguished. Additionally, the AgNPs formation was confirmed by EDS analysis (Shown in Figure 4). The presence of strong signals corresponding to the elemental silver confirmed the AgNPs formation. 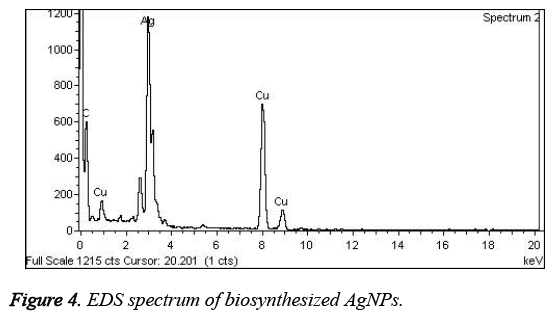 Figure 5, showed the FTIR analysis for the biofabricated AgNPs. It is found the presence of vibrational bands at 3390, 1390 cm-1 corresponding to the stretching of O-H and tertiary alcohol (C-OH) functional groups. Additionally, the presence of bands at 1712, 1615 and 1050 cm-1 are characteristic to the ketonic group, carboxylic -C=O and -C-O-C stretching vibrations correspondingly. Moreover, the size distribution and zeta potential of prepared AgNPs is shown in Figure 6. It is found that the average particle size of the plant extract induced AgNPs is found to be 11 nm with surface zeta potential of -59 mV. 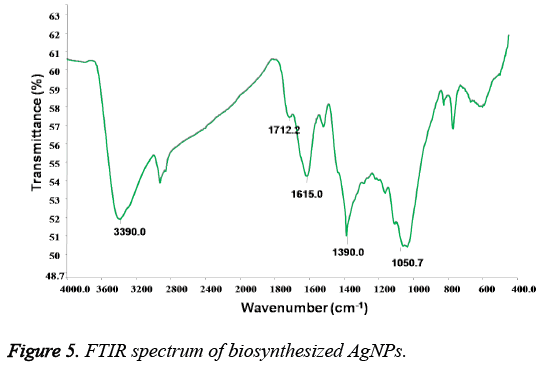 Figure 6: DLS analysis (A) and zeta potential (B) of AgNPs synthesized by using plant extract.

Further, the cytotoxicity studies showed that the synthesized AgNPs exhibited a dose-depended toxicity on human breast cancer (MCF-7) cell lines (Figure 7). On the other hand, the aqueous leaf extract of Tanacetum vulgare also exhibited a moderate cytotoxicity. It is found that the cell viability is decreasing with increase in the concentration of AgNPs and 90% cytotoxicity is observed when the AgNPs concentration is about 20 μg/mL and no further increase in the cytotoxicity is observed upto 40 μg/mL. The IC50 value for MCF-7 cells is found to be 5 μg/mL of AgNPs, where a 50% noticed cell death is observed. 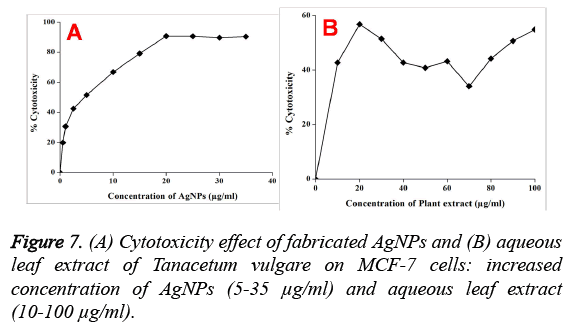 In this work, we have used Tanacetum vulgare leaf extract polyphenols as reducing and stabilizing agent for the biosynthesis of AgNPs. The polyphenols of Tanacetum vulgare extract plays an important role in the reduction and stabilization of the synthesized AgNPs. The formation of AgNPs is preliminarily confirmed by the change of colourless reaction mixture to reddish brown. This brown colour of the prepared AgNPs is due to the surface plasmon resonance (SPR) phenomenon of the silver nanocolloid, which arises due to the interaction of electromagnetic field with surface oscillated free electrons of AgNPs [13]. On the other hand, the SPR absorption band at 403 nm of AgNPs shown in the UVvisible spectrum further confirmed the conversion of Ag+1 to Ag0.

Additionally, the AgNPs formation is also confirmed by TEM, EDS and XRD analysis results. XRD pattern of AgNPs with distinctive peaks characteristic to the indexing planes showed the crystalline nature of the formed AgNPs. Further, the mean particle size of the AgNPs is found to be 10 nm, which is supported by DLS and TEM analysis results. Moreover, the size of the AgNPs obtained is in good agreement with the UV absorption peak obtained at 410 nm, indicating small, spherical NPs formation, as the shift in the SPR band of Ag, Au NPs is associated with their size [14]. This change in the properties of NPs with size is due to the quantum confinement effect [15]. On the other hand, the formation of small and spherical nanoparticles is highly advantageous as they are highly useful in biological applications such as Bio-imaging [16] and drug delivery [17] etc. For instance, spherical NPs of smaller size can easily cross the cellular membranes when compared to the larger particles. In addition, the stabilization of biomolecules onto the NPs surface may increase their biocompatibility [14].

Furthermore, the FTIR spectrum revealed the capping functionalities of the prepared AgNPs. The presence of FTIR bands characteristic to the carboxylic and hydroxyl groups vibrations further revealed the capping of oxidised polyphenols onto the surface of AgNPs. On the other hand, the stretching vibrational band corresponding to the ketonic group at 1710 cm-1, signified the important role of hydroxyl groups of extract polyphenols in the Ag+ reduction [18,19]. The successively formed quinone forms of polyphenols will decorate onto the formed Ag nuclei and stabilize them. However, it is well reported that the -OH functionalities of plant polyphenols gives electrons for the reduction of noble metal ions and will be subsequently converted into their ketonic forms [18]. The correspondingly formed oxidised polyphenols will stabilize the readily formed Ag nuclei. The surface capping of AgNPs with oxidised polyphenols is also supported by the negative surface charge obtained which arises due to the hydroxyl and ketonic functionalities of oxidised polyphenols creating the repulsive forces among the AgNPs, leading to the prevention NPs aggregation. Additionally, the higher negative zeta potential values of AgNPs also suggested the formation of highly stable nanocolloid with smaller nanoparticles. From these results, it can be concluded the stabilization of the AgNPs with oxidised polyphenols of Tanacetum vulgare leaf extract.

Further, the AgNPs showed dose dependant cytotoxicity against the breast cancer (MCF-7) cell lines. From the Figures 6A and 6B, it is found that both the AgNPs and control plant extract exhibited cytotoxicity, indicating the role of plant extract in cytotoxic activity of AgNPs against MCF-7 cells. Also, the prepared AgNPs showed dose dependant cytotoxicity against MCF-7 cells. However, it is found that the plant extract did not show dose dependant cytotoxicity, which may be due to the presence of several biomolecules such as polyphenols, flavonoids, carbohydrates etc. Among these bioconstituents, some of the biomolecules may increase or decrease the cell growth. On the other hand, the cytotoxicity depends on the morphology, size and surface capping groups of NPs [20]. It is well known that the mechanism of cytotoxicity of AgNPs involves the cellular uptake of nanoparticles via macropinocytosis and clathrin-dependent endocytosis. Various studies have revealed that AgNPs works by triggering the intracellular ROS by preventing the intracellular antioxidants. The immediately formed ROS then damage the DNA which results in the cell death. Similarly, Piao et al. [21] have showed that the highly reactive hydroxyl radicals produced by silver nanoparticles damage the cellular components such as DNA leading to cell death. From the earlier studies, it is concluded that the AgNPs coated with plant bioconstituents induce oxidative stress leading to the apoptosis via caspase-mediated and mitochondria-dependent pathways [22].

A facile, green method for the AgNPs preparation by using Tanacetum vulgare is shown in this work. The zeta potential and FTIR results revealed the capping of oxidised polyphenols of Tanacetum vulgare extract onto the surface of AgNPs. Further, polyphenols capped AgNPs have showed a dose dependant cytotoxicity against MCF-7 cell lines, opening the scope of therapeutic applications towards the breast cancer treatment.

Authors greatly acknowledge the help of Henan Province Hospital of TCM for giving platform to do this research.