Objective: To investigate the chemical composition of EtOAc extract from Artemisa gmelinii Web. ex Stechm. (A. gmelinii) and evaluate their in vitro antitumor activity.

Main Findings: Eight compounds, namely ameliaroside (1), annphenone (2), 6, 8-dimethoxycoumarin-7- O-β-D-glucuronide (3) 6-methoxycoumarin-7-O-β-D-glucuronide (4), sacroflavone A (5), sacroflavone B (6), sacric acid A (7) and sacric acid B (8) were isolated from the EtOAc extract from A. gmelinii. Compounds 3-6 have certain activity against these tested human cancer cell lines. Among of them, compound 5 (IC50: 5.03-6.78 μmol/L) was found more potent than those of the reference Etoposide (IC50: >50 μmol/L) against Hela and MKN-45.

Conclusion: Compounds 1-8 are isolated from this plant for the first time. Compound 5 (IC50: 5.03-6.78μmol/L) was found more potent than those of the reference Etoposide (IC50: >50 μmol/L) against Hela and MKN-45. Compound 5 have good antitumor effect which may be used as potential antitumor agent.

Tumor is the most common and frequently occurring diseases, of which malignant carcinoma is one of the most serious diseases that endanger human health [1-3]. It is estimated that annual tumor cases will rise from 14 million in 2012 to 22 million within the next two decades [4-6]. Today, although the synthetic antitumor drugs are dominating the market, their negative side-effects and the risk of resistance remain a pressing matter in their clinical use. These issues drive the research and development of herbal medicines, which have made a comeback to improve our basic health needs. Many medicinal plants such as Radix ophiopogonis, Panax quinquefolium, Ganoderma lucidum Karst and Angelica sinensis, have been shown to exhibit potent antitumor effects [7-10].

Artemisa gmelinii, family composite, is widely distributed in Inner Mongolia of China [11]. Artemisa gmelinii (aerial parts) are used as a characteristic medicine in Mongolian folk to treat cancer and its related diseases. It is widely used in Mongolian as a substitute of the material medica, Artemisa sacrorum Ledeb., which is used in treatment of infantile convulsion, hepatitis, appendicitis and trauma. The secondary metabolites including flavonoids [12] and sesquiterpenes [13] have been isolated from the aerial parts of Artemisa gmelinii. However, there is few reported scientific study to support these claimed therapeutic and medicinal effects. In our previous pharmacological studies [14] on this plant showed that the EtOAc extracts of Artemisa gmelinii had anti-tumour activity, which urges us to study the EtOAc extracts from Artemisa gmelinii. In our phytochemical investigation, eight compounds were isolated, such as ameliaroside (1), annphenone (2), 6, 8- dimethoxycoumarin-7-O-β-D-glucuronide (3) 6- methoxycoumarin-7-O-β-D-glucuronide (4), sacroflavone A (5), sacroflavone B (6), sacric acid A (7) and sacric acid B (8), whose structures are shown in Figure 1. 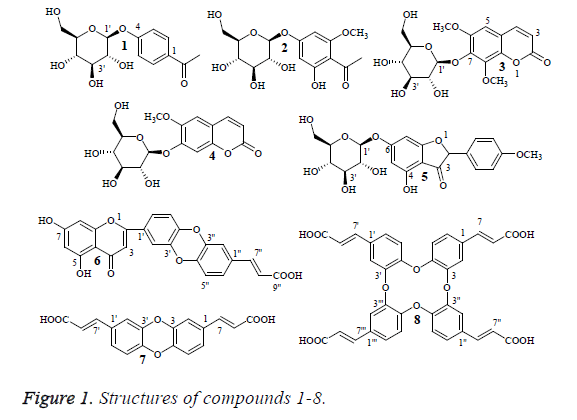 For searching more potent antitumor agents, we centered our attention on the isolated compounds from the EtOAc extracts of Artemisa gmelinii. All the isolated compounds were investigated for their in vitro activity against four human cancer cell lines, including HepG2 (liver carcinoma), Hela (cervical cancer), MCF-7 (breast cancer) and MKN-45 (gastric cancer) by SRB. This paper describes the antitumor activity and the chemical composition from the EtOAc extract of Artemisa gmelinii.

From the EtOAc extract of Artemisa gmelinii, eight compounds including ameliaroside (1), annphenone (2), 6, 8- dimethoxycoumarin-7-O-β-D-glucuronide (3) 6- methoxycoumarin-7-O-β-D-glucuronide (4), sacroflavone A (5), sacroflavone B (6), sacric acid A (7) and sacric acid B (8) were obtained from this plant for the first time. Their structures were elucidated on the basis of comparing their NMR data with those reported in the literature [16-22].

aIC50 values were presented as the concentration of drug inhibition 50% cell growth and determined by at least three separate tests and reported.

Table 1: In vitro activity of compounds 1-8 against four cell lines.

Compound 5 is a derivative of diphenylethene. Diphenylethene is a group of natural organic compounds with a C6-C2-C6 unit in the parent nucleus, which have a variety of biological activities, such as anti-tumor, antihypertensive, ester, antiplatelet aggregation, antibacterial and so on. For example, resveratrol is a widely known natural product, which exhibited significant pharmacological activities [23-26] and considered a plant antitoxin. The structure of compound 5 can be regarded as the oxidized and cyclization of the vinyl group (C2) in diphenylethene. The structural characteristics of compound 5 may be the reason why compound 5 have good antitumor effect. In addition, the type of sugar linkage with the aglycone should be an important factor for the antitumor activity of compound 5.

This work was supported by the National Natural Science Foundation of China (No. 81660698) and the Science and Technology Major Project of Inner Mongolia Mongolian medicine in China (No. GCY20150712).

The authors declare no financial or commercial conflicts of interest.