Purpose: This study was carried out to investigate incidence of autophagy and apoptosis in spiral ganglion cells (SGCs) and cochlear nucleus neurons, and their involvement in the pathogenesis of diabetes-induced hearing impairment in rats.

Methods: Rats were randomly divided into control group and diabetes groups, with variations in duration of diabetes: 4 weeks (DM4W), 8 weeks (DM8W) and 12 weeks (DM12W). Diabetes was induced by intraperitoneal injection of streptozotocin. The rats of each group were tested with auditory brainstem response (ABR). Ultra-structures of cochlear nuclei and SGCs were examined by transmission electron microscope. Western blot and immunehistochemical methods were used to for estimating the expression of autophagy-related factors (Beclin 1 and cleaved-LC3); apoptosis-related factors (Bax, Bcl-2 and cleaved Caspase-3 protein) in cochlear nuclei and SGCs.

Results: ABR response thresholds of rats in DM8W and DM12W group were increased significantly. Compared to control group, the latency and wave duration of DM12W group were higher. Mitochondria swelling and vacuoles were observed in SGCs of diabetes group. More lysosomes and myelin layer plate fractures were seen in cochlear nuclei of diabetes group. The expression of Beclin 1, cleaved-LC3, Bax and cleaved Caspase-3 protein in DM8W and DM12W groups increased, while expression of Bcl-2 was decreased, both significantly.

Conclusion: The results show that autophagy and apoptosis are implicated in the development of hearing impairment in diabetic ratss.

Diabetes can cause varying degrees of damage to auditory function, which manifests clinically as a slow-onset, bilateral, progressive and symmetry sound nerve deafness. The severity of hearing loss is related to the duration of diabetes [1,2]. Cell autophagy is a degradative lysosomal process which is highly conserved evolutionally in eukaryotic cells [3]. Autophagy and apoptosis can be mutually activated, and share multiple molecular switches and coordinate transformation [4-7]. In recent years, studies have shown that autophagy and apoptosis are correlated with occurrence and development of diabetic complications such as diabetic nephropathy [8,9] and diabetic cardiomyopathy [10-12]. However, reports relating autophagy to diabetes-induced hearing impairment. The influence of diabetes on chronic pathological changes of auditory system was investigated in this study. Apoptosis and autophagy were studied to see whether they are involved in the high blood sugar-induced toxicity to SGCs and cochlear nuclear neurons.

The diabetic model group was developed after 1 week of acclimatization of the rats. The rats were fasted for 12 h prior to induction of diabetes by intraperitoneal injection of 1% streptozotocin solution (STZ, 55 mg/kg, single dose). The control group was injected with equivalent volume of citric acid buffer solution [13]. Water and feed were provided ad libitum to the rats. Blood was taken via tail vein 72 h after injection of streptozotocin. Fasting blood sugar was measured with Roche glucose meter. Rats with blood sugar levels>16.7 mmol/L were used as diabetic model. The rats were randomly divided into control group, and 4-week diabetic, 8-week diabetic and 12-week diabetic groups. There were 20 rats in each diabetes group and 10 rats in control group. Fasting blood glucose and rat weights were measured once every 2 weeks.

The rats were anesthetized by intraperitoneal injection of 2% pentobarbital sodium solution at a dose of 0.3 ml/l00 g, kept warm with hot water bag. Smart EP auditory was used to test by evoking potentiometer. The record needle electrode was placed in the center of the rat parietal subcutaneous region, while the reference electrode was positioned in the ipsilateral mastoid. The grounding electrodes were placed under the right rear of the rat leg. Sound stimulation was a short click at a frequency of 11.1 times/s with duration of 0.1 ms by density and scatter alternating. Schedule of observation was 12 ms with 1024 superposition. The sound was 1 cm to outer ear through plug-in headsets. It began from 90 dB SPL. The minimum stimulus intensity of III wave in the ABR wave was determined starting with 10 dB and then reducing to 5 dB stimulation, to determine the threshold of ABR. The incubation period and the corresponding wave period of I, III, V wave were recorded at the stimulus intensity of 80 dB SPL [14]. Each test was repeated twice.

The worm shaft and cochlear nucleus frozen at -80°C were ground in liquid nitrogen, and then 0.2 ml RIPA and 2 μl PMSF. The tissues were homogenized at low temperature with ultrasonic cell disruptor. Protein was quantified by BCA method after centrifugation. The extracts were subjected to sodium dodecyl sulfate-polyacrylamide gel electrophoresis (SDS-PAGE), and incubated at 4°C with anti-Cleaved - LC3 (dilution of 1:1000, Abclonal company, USA), anti-Cleaved Caspase-3 (dilution of 1:1000, CST company, USA); anti Beclin 1 (dilution of 1:1000, Abcam Company, UK) and anti Bax, Bcl-2 (dilution of 1:1000, Wuhan Sanying Company). After washing with TBST, they were incubated with second anti β-actin (1: 2, 000) at room temperature for 1 h. Protein bands were quantified by using grey value of Image J software after TBST catharsis and DAB coloration.

Immuno-histochemical detection of cochlear nucleus and cochlea in rats

Evaluation of ABR threshold value and the duration of diabetes 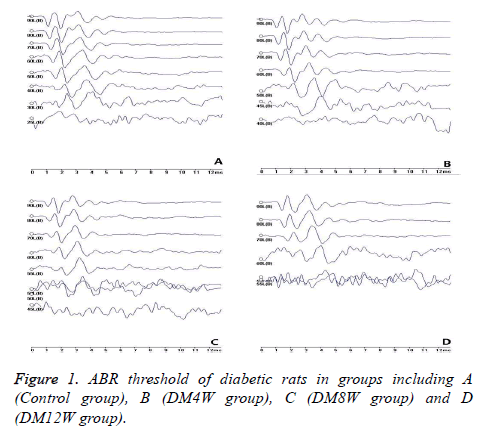 Ultra-structure under the transmission electron microscope 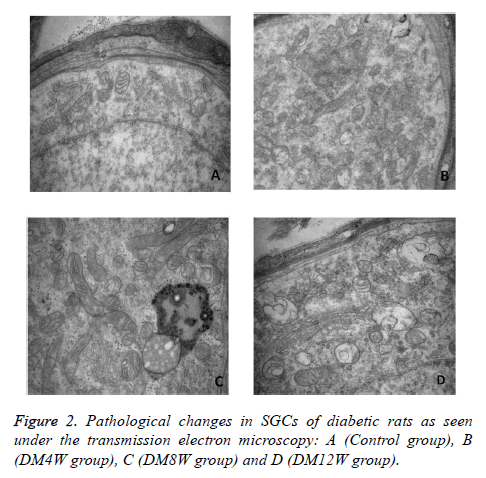 The cell morphology of cochlea in control group was normal. The shape of nerve cell body around myelin sheath was normal, with a circular and dense myelin board layer. The cochlear nucleus neurons in DM4W group had no obvious change, but more myelin distributed around the cell body had cavitation, plate layer separation and deformation. With the extension of diabetes duration, pathological changes in DM8W and DM12W groups included swelling of neurons in cochlear nuclear, mitochondrial cavitation, irregular shape of nucleus r and autophagy-lysosome. The pathological change in DM12W group was most obvious. With the progress of disease, myelin deformation, cavitation, plate layer separation and disintegration were seen.

Beclin 1 and LC3 proteins were expressed mainly in cytoplasm of the diabetes groups. The expression level of Beclin 1 protein was higher in the groups with longer duration of diabetes. Cleaved-LC3 in DM8W and DM12W group were higher than in control group, but the level of expression of Cleaved-LC3 in DM4W group was not significantly different from that in the Control group (Figure 3). 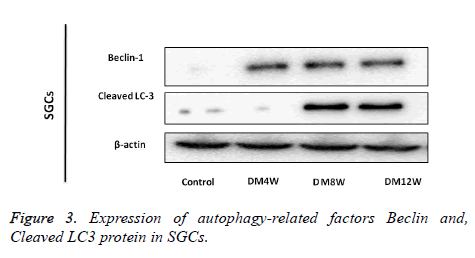 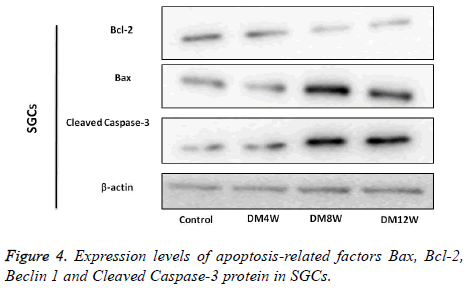 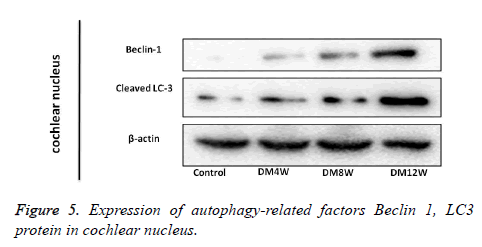 Expression of apoptosis-related factors Bax, Bcl-2 and Cleaved Caspase-3 in the cochlear nucleus 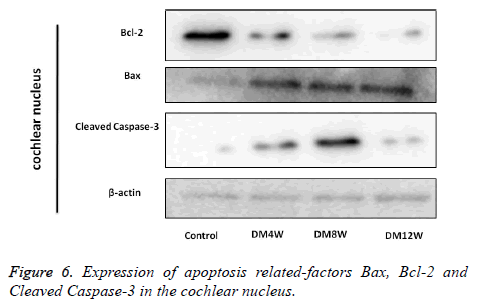 SGCs as the first level neurons of auditory pathway belong to end cell with high differentiation. It is difficult to repair after injury. Auditory center is in the lower brainstem of cochlear nucleus (CN). The main function includes primary processing of voice information, faithfully spreading it to the next level nerve nuclei. Signals pass from the cochlea into the nerve center through the auditory afferent nerve. Diabetes can lead to peripheral neuropathy (DN). The pathogenesis of DN is linked to oxidative stress, inflammation, mitochondrial dysfunction, energy crisis, interaction of axons and glial cells as well as demyelinating lesions [16-18]. One of the pathological changes in DN includes peripheral neuropathy, involving myelin, axon and neurons. In the early period, it could cause focal decay of nerve axons [19], reduction of neuron dendritic branches, activation of microglia [20-22] and nerve damage. These changes may also occur in the auditory nerve system at the same time. Hearing loss in patients with diabetes may be related to the damage to cochlea. The incidence of hearing impairment in patients with diabetes ranges from 0% to 93% [23-25]. In 2014, the American Diabetes Association recommended that hearing impairment in diabetes complications be included in the diabetes diagnosis guide, and it was set as one of the areas used for diagnosis [26]. Although hearing impairment in diabetes has attracted the attention of more and more researchers, the specific mechanism involved is still unclear.

Autophagy is self-degradation of conservative cells, which are subjected to lysosomal degradation [27]. Cells play protective roles by enhancing autophagy which removes damaged organelles and metabolic products. Excessive autophagy can lead to the death of cells [28-30]. LC3 is a specific marker for detection of degree of autophagy. In some cases, the autophagy inhibits apoptosis to ensure cell survival, but it can also induce cell death by autophagy itself, or jointly with apoptosis, through multiple interactions from signalling pathways and regulatory proteins [4-7]. Bcl-2 as a protein family protein plays a dual role in controlling autophagy and apoptosis. Beclin 1 (Atg6) is the only mammalian autophagy gene, which was in homology with yeast autophagy genes. It can be combined with the Bcl-2 of anti-apoptotic proteins for regulating autophagy and apoptosis. When Beclin 1 combines with Bcl-2/Bcl-xL, the complex of Beclin 1: Bcl-2/Bcl-xL activates autophagy by inhibiting Beclin 1. When the Bcl-2 which promotes apoptosis combines with the Bcl-2/Bcl-xL, the release of Beclin 1 induces autophagy [31]. Apoptosis could also affect autophagy through caspase enzyme. Caspasemediated cleavage of Beclin 1 inactivates autophagy. When the end of the C fragment was translocated to mitochondria, it made the cell more sensitive to apoptosis [32].

Studies have confirmed that autophagy is related to chronic diabetic complications such as diabetic nephropathy [8,9], diabetic retinopathy [33], diabetic peripheral neuropathy [34,35], diabetic cardiomyopathy [10-12] and diabetes vascular lesions [36,37]. However, hearing impairment in diabetes has not been reported. This study explored pathological changes in chronic auditory system in diabetes, to see whether apoptosis and autophagy were involved in diabetes-induced damage to SGCs and toxicity of cochlear nucleus neurons. Hearing loss was associated with diabetes duration from the results of ABR. I~V wave incubation period and wave duration of ABR in the DM12W group was extended. Compared with the control group, the expression of autophagy related proteins was higher in SGCs and cochlear nucleus of diabetes group, indicating that hyperglycemia may be the factor causing increased autophagy stimulus, which may be related to the duration of disease. It was found that high blood sugar damaged the SGCs and cochlear nucleus neurons. With longer duration of diabetes, the level of apoptosis increased gradually. The results showed that autophagy and apoptosis are associated with the process of hearing impairment in rats with diabetes. Autophagy may play a role in the toxicity to SGCs and cochlear nucleus neurons through the Bcl-Beclin 1 pathway.