Objectives: To evaluate the impact of the physical exercise on circulating FGF21 level and the effect of chronic exercise time in normal people.

Methods: A review was conducted according to the guidelines of the Preferred Reporting Items for Systematic Reviews and Meta-Analyses using the online databases PubMed, Science Direct, and EBSCO to identify relevant studies published through July 2016. Review Manager was used to estimate the effect of endurance exercise on the change of blood FGF21 concentration. Egger’s test was run to evaluate the funnel plot asymmetry. A smooth scatter diagram was used to determine the impact of exercise time on FGF21 level change.

Conclusion: Current evidence demonstrates that chronic exercise significantly decreases circulating FGF21 level, and the reduction degree is increased with the extension of the exercise time.

Fibroblast growth factor 21 (FGF21) belongs to the FGF family [1] and is abundantly expressed in the liver, skeletal muscle, pancreas and adipose tissue [2]. FGF21 has been recently characterized as a hormone that regulates peripheral glucose tolerance and hepatic lipid metabolism [3]. Hepatic FGF21 induction via PPARα [4] during long term fasting is required for the adaptive metabolic responses such as activation of Free Fatty Acid (FFA) oxidation, lipolysis and ketogenesis [5]. Pharmacologic administration of FGF21 in obese rodents [6] or monkeys [7] improves insulin sensitivity, lowers both plasma glucose and triglyceride levels, and induces a small but significant weight loss. Furthermore, transgenic mice over-expressing FGF21 in the liver showed improvement in glycemic control and were resistant to dietinduced obesity [8]. Therefore, FGF21 is thought to be as a potential molecular target or a therapeutic agent for the treatment of obesity and its associated metabolic disease.

Exercise training has a favorable effect on various metabolic disorders such as obesity, type 2 diabetes and atherosclerosis [9]. The effect of exercise training on circulating FGF21 has received remarkable attention recently, and a large body of published studies on related topics exists [10-19]. However, there is no consistent conclusion or consensus has been reached. The study by Ramos et al. pointed out daily physical activity was positively associated with an increased serum FGF21 level in healthy humans, and a two-week of supervised exercise caused a significant elevation of the serum FGF21 level [11]. However, increasing evidence has noted that that exercise training decreased serum FGF21 level in both humans [13-15,19] and animal models [20]. These contradictory findings raise great concerns about the relationship between chronic exercise training and changes in circulating FGF21. Furthermore, existing studies have varied considerably in the study characteristics, such as study design and exercise modes, and have utilized relatively small sample sizes, making their conclusions on the effects of chronic exercise training in altering FGF21 levels in peripheral blood less robust. The growing number of published studies on related topics allows researchers to conduct critical analysis using rigorous methods and to summarize the primary results.

As such, this study was aimed at conducting separate metaanalyses of available literatures to evaluate the association between chronic exercise training and changes in circulating FGF21 levels among normal people, and to identify potential sources of heterogeneity and bias that may lead to inconsistencies in reported results. This study was also in an attempt to provide guidance for future study investigating the effects of endurance exercise training on circulating FGF21.

This meta-analysis is reported in accordance with the Preferred Reporting Items for Systematic Reviews and Meta-Analyses (PRISMA) [21] statement. The systematic search was performed using PubMed, Web of Science, Springerlink, and EBSCO from January 2000 to July 2016. January 2000 was chosen as the starting date since FGF21 was not identified before 2000.

The text words ‘FGF21’ and ‘AND’, with the text words ‘exercise’ or ‘training’ or ‘physical activity’ for the search. And further, we manually examined references of all received articles.

Articles in the English language were eligible for inclusion provided that they fulfilled the following inclusion criteria: (1) were case-control studies conducted in the general or clinical population (trained or untrained) with more than five participants without any known disease; (2) was not an acute exercise training intervention (endurance exercise/ training); (3) compared with a control group in which participants were advised not to change their previous lifestyle (without regular exercise training), or between post- and pre-exercise when a control group was not applicable; (4) reported circulating (plasma/serum) FGF21 levels (the primary outcome); (5) were Randomized Controlled Trials (RCTs) or non-randomized controlled trials (NRSs). The types of NRSs design were determined according to the criteria in the Cochrane Handbook for Systematic Reviews of Interventions; and (6) samples in articles are normal (healthy and non-obese) people (Because disease or obesity affects circulating FGF21) [22-24].

Studies were excluded if they were reviews, cross-sectional studies, not involving humans, not in the English language, or the data of interest were insufficient and could not be provided by the corresponding authors. Posters were also excluded because of the limited information. A flow chart of the searching results was presented in Figure 1 and the information of each study is provided in Table 1. 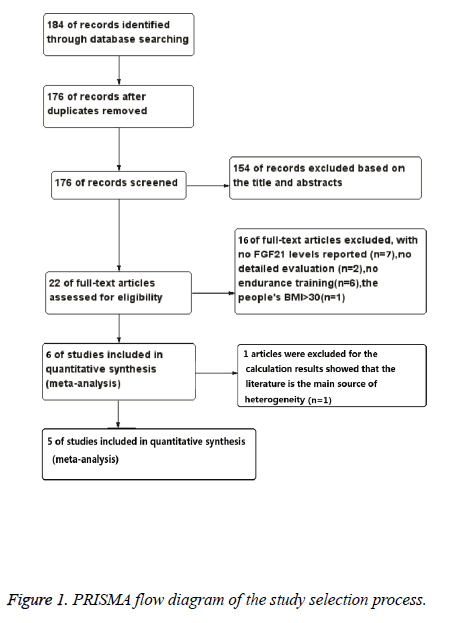 Table 1. Characteristics of the studies included in the meta-analysis.

A meta-analysis of continuous outcomes was conducted using Review Manager (RevMan software package version 5.3) and R software 3.3.0. Values were presented as means ± SD. For studies with reporting median and range, the equations of Hozo [26] were used to estimate mean and SD.

Data from all included studies were used to calculate the weighted mean difference and 95% Confidence Interval (CI) using a continuous random effects model. Weighted percentages were based on the sample sizes of respective studies. Statistical significance was assumed to be P<0.05 in a Z-test analysis, which examined whether the effect size differed significantly from zero [27]. Study heterogeneity was evaluated using the I2 statistic and Cochrane’s Q. Values of I2 greater than 50% and 75% were considered to indicate moderate and high heterogeneity, respectively [25].

Significant heterogeneity was indicated when Cochrane’s Q exceeded the degrees of freedom (df) of the estimate. When meta-analysis was considered to indicate moderate-to-high heterogeneity and the random-effects model was used, publication bias was tested visually using a funnel plot. And we use R software 3.3.0 to carry out the egger’s test for rank correlation test of funnel plot asymmetry. The dose–response relationship between the exercise time and changes of FGF21 level in plasma or serum were determined using a smooth scatter diagram with the regression analysis.

Figure 1 illustrated how the literatures were arranged. The initial search returned 184 abstracts, after duplicate studies (n=8), reviews, cross-sectional studies and posters (n=154) were excluded, 22 studies were assessed for their eligibility by applying the inclusion and exclusion criteria. As a result, another 16 studies were excluded, 7 studies with no FGF21 levels reported, 2 studies without detailed evaluation, and 6 studies with no endurance training reported, and in 1 study people’s BMI is more than 30 [16]. Then, 6 studies are included in quantitative synthesis. After quantitative calculation, 1 study was excluded for it is the main source of heterogeneity [11]. Ultimately, five studies met the specific criteria proposed for the present meta-analysis (Table 1) [10,13-15,18].

As shown in Table 1, among the 5 studies included, changes of circulating FGF21 concentrations in healthy untrained adults from baseline to post-exercise are determined in 3 studies [13,15,18]; circulating FGF21 levels are compared in subjects with and without training in 2 studies [10,14]. Both endurance and resistance training (20 min of muscle strength training per time and five times a week) are adopted in non-diabetic overweight women (BMI=27.6 ± 2.4) [10], only endurance training is carried out in healthy Japanese [13,18] or American [14,15]. The exercise intensities range from low to heavy. No major or minor adverse effects related to exercise training are reported. Circulating FGF21 concentrations in plasma or serum are determined by commercially available ELISA kits in all 5 studies. 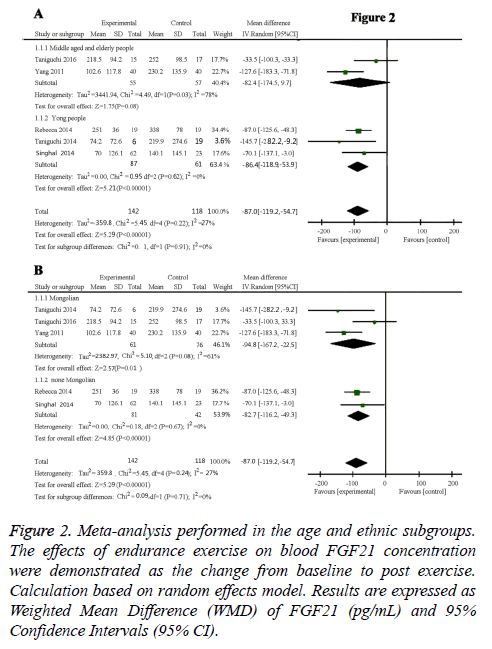 Figure 2: Meta-analysis performed in the age and ethnic subgroups. The effects of endurance exercise on blood FGF21 concentration were demonstrated as the change from baseline to post exercise. Calculation based on random effects model. Results are expressed as Weighted Mean Difference (WMD) of FGF21 (pg/mL) and 95% Confidence Intervals (95% CI). 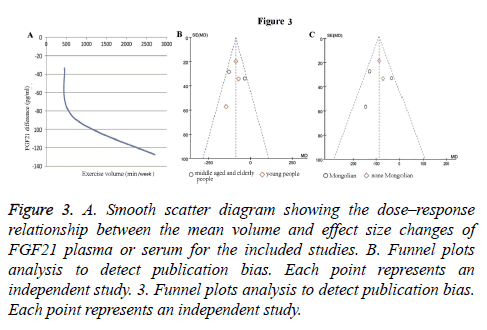 Subsequently, five studies involving 142 healthy participants were pooled to evaluate the effects of endurance exercise training on circulating FGF21 levels compared with the 118 matched control participants. As shown in Figure 2, the combined results showed a significant decreased circulating FGF21 concentration, as indicated by the mean effect size of -87.0 pg/ml (95% CI: -119.2 to -54.7, p<0.00001) with low heterogeneity (I2=27%; Cochrane’s Q=5.45, df=4, p=0.22).

To inspect the effect of endurance exercise time on FGF21 levels, we analysed the dose-response relationship between the mean volume and change of circulating FGF21 concentration by using regression analysis. Three studies providing specific exercise type and time were included [10,14,18]. As displayed in Figure 3A, the smooth scatter diagram showed a reduction trend of FGF21 levels with the extension of the exercise time.

It has been reported in large body of literatures that physical exercise can increase insulin sensitivity and promote lipid catabolism, resulting in decreased plasma levels of insulin and triglyceride [28-31]. And FGF21 also has the same physical function [32-35]. So logically, after chronic endurance exercise, insulin sensitivity increases, it does not require so much FGF21 to promote insulin sensitivity, and therefore the level of FGF21 will decline. Three studies included in the article also observed that the levels of serum insulin and blood glucose in the endurance exercise group were decreased compared to the control group [10,13,18], which are agreement with the explanation of the reasons for the decline of FGF21 level.

Besides, FGF21 in peripheral blood mainly comes from liver [36], and exercise can increase the expression of FGF21 receptor beta-Klotho in rat liver [37,38]. FGF21 and its receptor bind to form a stable FGF21/ beta Klotho/FGFR complex, which can enhance the expression of PGC-1alpha in liver tissue [39]. However, PGC-1alpha is a negative regulator of FGF21 [40]. Therefore, logically, FGF21 levels will decrease after chronic exercise.

So far, this is the first comprehensive analysis to systematically evaluate the impact of chronic endurance exercise on circulating FGF21 level. The methodology of this study was registered a priori, which minimises the reporting bias. We have to acknowledge that the study also has several inadequacies. First, the relatively small number of studies limited our ability to fully understand the effects of chronic exercise training on circulating FGF21 level, such as combined chronic endurance and resistance exercise training effects. The second, the relatively literature content is not rich enough and limited our ability to identify potential moderator variables associated with the changes in circulating FGF21, such as insulin sensitivity/resistance index and body fat percentage. If we have a more detailed data, maybe we can study further the effects of exercise on insulin and speculate how exercises affect circulating FGF21 through insulin. Besides, the document type is not various enough. There is only one article that can be incorporated into the RCTs model, which is more meaningful than the NRSs model, because NRSs has more potential of bias than the RCTs. Finally, the mechanism of a phenomenon is usually not single (including FGF21 changes after exercise), which are involved in many different factors, leading to contradictory results. Different mechanism can be working between cases with elevated FGF21 after exercise and cases with decreased FGF21. For example, exercises activate KLOTHO increasing FGF21 expression [37,38]. Other mechanism will cause the loss of FGF21, such as mechanisms mentioned above. More careful study on clinical characteristics or exercises (mode, intensity, time and so on) between FGF21- increasing cases (studies) and FGF21-decreasing cases (studies) may lead to identifying another factor determining increasing or decreasing of FGF21 after exercise.