#These authors contributed to the work equally

This study aimed to investigate the impact of strengthening clinical management and intervention on prognosis and treatment compliance among patients with Chronic Heart Failure (CHF). From June 2011 to July 2013, a total of 397 patients with CHF who had been admitted to the Center of Heart Diseases, First Agricultural Construction Division Hospital of Xinjiang Production and Construction Corps and met the diagnostic criteria were randomly divided into 2 groups according to the time of admission and personal preferences: the management-strengthening group (group R, 221 cases) and routine group (group S, 176 cases). All patients were subjected to a standard CHF treatment protocol; group S additionally received Heart Failure (HF) education, outpatient follow-up, and telephonic followup to strengthen the management and intervention. The results of the 2 groups were compared after 12 months. Compared with group R, the mortality and rehospitalization rates of group S were significantly lower, whereas the drug usage and optimal treatment rates were significantly higher; in addition, HFrelated indicators were significantly improved, and costs were significantly reduced (P<0.05). Strengthening clinical management and intervention could significantly decrease rehospitalization and mortality rates, improve prognosis and quality of life, and conserve medical resources.

Heart Failure (HF) is the final stage of a range of organic heart diseases and is defined as a complex clinical syndrome that emerges when cardiac output cannot meet the metabolic needs of the body [1]. Worldwide, the number of patients with HF has reached 22.5 million, and these patients have a 5 y survival rate similar to that of cancer patients, with a rehospitalization rate of approximately 20% within 30 d of discharge [2]; hence, HF has become the leading cause of death in developed countries [3], and is one of the major cardiovascular diseases and public health issues in China, in the 21st century. Many large-scale clinical trials have demonstrated that Angiotensin- Converting Enzyme Inhibitors (ACEIs) and β-receptor blockers could significantly decrease the mortality rate associated with Chronic HF (CHF); however, even with the use of these medications, 10-50% of the patients were rehospitalized within 3-6 months, 40% were rehospitalized or died within 1 y after diagnosis, and 50% died within 4 y [4,5]. Numerous foreign studies have shown that for patients with CHF, disease management and intervention could decrease the rehospitalization and mortality rates, improve prognosis and quality of life, and decrease healthcare costs [6-8].

All patients underwent a physical examination, electrocardiogram (ECG), cardiac color ultrasonography, and full chest radiography on the day of hospitalization, as well as urine, blood, thyroid function, and blood biochemistry examinations, dynamic ECG, and N-terminal pro b-type natriuretic peptide (NT-proBNP) testing on the second day. A patient’s HF status was diagnosed based on clinical symptoms and auxiliary examination findings, with reference to the Framingham diagnostic criteria. According to the order of admission and individual preferences, patients were randomly divided into group S (176 cases) and group R (221 cases). All patients were subjected to a standard treatment protocol, including the administration of digitalis preparations, diuretics, and vasodilators, as well as an ACEI/angiotensin II receptor blocker (ARB), β-blocker, and spironolactone. The concentrations of ACEI/ARB and β-blocker were gradually increased to reach the target dose or maximum tolerated dose.

Additionally, some interventions were performed only for Group S. These included outpatient follow-up by a specialist on the day of discharge; the first follow-up aimed to establish a relationship with the patient, and subsequent follow-ups were conducted according to the planned follow-up schedule. A telephonic follow-up was arranged within the first week of discharge by a specialist, and clinical symptoms, including dyspnea, edema, and palpitation, and details of the patient’s (e.g., water intake, food intake and sodium intake) were recorded. Patients whose conditions were stable were followed up telephonically once every 2 w; those with an unstable condition were followed up telephonically once a week to remind them about timely treatment according to the clinical symptoms recorded during follow-up. Outpatient follow-up was arranged at 1, 3, 6, 9, and 12 months after discharge and included a physical examination and necessary auxiliary laboratory examinations. The follow-up duration was 12 months. The follow-up generally included records of the patients' daily living conditions, intake and excretion of liquids, sodium intake, dosages and side effects of medications, and clinical manifestations, along with an exercise tolerance test. Patients and their families were educated about fluid restrictions, diet, and early detection and treatment of HF symptoms. Patients were taught self-management (e.g., monitoring of body weight and symptoms, opportunities and ways to seek help). Optimal treatment and gradually increased the dosage to the specified target dose or maximum tolerated dose.

The above interventions were not performed for group R. After discharge, patients were informed about standard treatment programs, which included the administration of a digitalis preparation, diuretic, and vasodilator, along with an ACEI/ ARB, β-blocker, and spironolactone. The doses of ACEI/ARB and β-blocker were gradually increased to reach the target dose or maximum tolerated dose. Patients were followed up regularly and were allowed to select hospitals and physicians voluntarily, without any restriction. Patients were required to report their follow-up results to the HF clinic; otherwise, the HF clinic would perform a telephonic follow-up and data collection once every 3 months.

Regarding the quality of life assessment, a direct Chinese translation of the "Minnesota Living with Heart Failure Questionnaire" (LiHFe) [9] was used to assess this parameter. The questionnaire comprised 21 simple questions that were related to emotions, physical strength, and economic and social aspects. Each question could be answered on a 6-point scale ranging from 0 (best) to 5 points (worst). All patients were educated about the guidelines before filling out the questionnaire, which was completed within 5-10 min; the score was calculated as the sum of the scores of all questions.

Table 1: Comparison of baseline characteristics between the two groups.

Comparison of death and rehospitalization rates 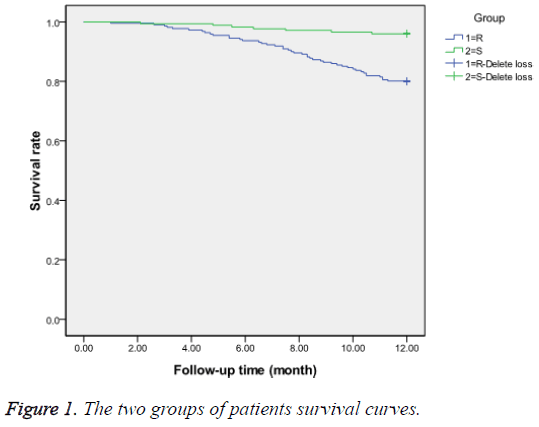 A skewed difference was observed in the plasma NT-proBNP levels of the 2 groups, which were then subjected to a logarithmic analysis. During follow-up, the mean Left Ventricular End Systolic Dimension (LVESD), Left Ventricular End Diastolic Dimension (LVEDD), LVEF (%), left ventricular Fractional Shortening (FS) (%), and logNT-proBNP values were significantly improved in group S relative to the baseline values and those of group R (P<0.05); however no significant difference was observed in the left atrial diameter (LAD; P>0.05). The mean LVEF (%), FS (%), and logNT-proBNP values in group R improved significantly relative to the baseline values (P<0.05), whereas no significant differences were observed in cardiac function-related parameters, such as LAD, LVEDD, and LVESD (P>0.05). The improvements in cardiac function-related parameters were significantly better in group S than in group R (P<0.05; Table 2).

Table 2: Comparison of cardiac function-related parameters between the two groups.

Comparison of quality of life

With respect to the scores obtained on the LiHFe questionnaire [9], the physical score, mood score, and total quality of life score were significantly better among patients in group S than those at baseline and among patients in group R (P<0.05); however, no significant differences in symptom and social restriction scores were observed in either group before the intervention and during follow-up (P>0.05) (Table 3).

Table 3: Comparison of quality of life between the two groups.

At baseline, there was no statistical difference between the 2 groups in terms of medication usage and the proportion of patients using a target-reaching dosage (P>0.05). During follow-up, the rates of ACEI, β-blocker, ARB, diuretic, and ACEI plus β-blocker usage were significantly higher in group S than in group R (P<0.05), and the percentage of patients using the target-reaching dosages of ACEI and β-blocker was also dramatically higher in group S than in group R; there was no significant difference in the proportion of digoxin use between the 2 groups (P>0.05; Table 4).

Table 4: Comparison of medication usage and proportion of target-reaching dosage between the two groups.

Table 6: Predictors of rehospitalizations and deaths based on Multiple factors analysis.

CHF, the last stage of a range of cardiovascular diseases, is a complex clinical syndrome. Despite great progress in the diagnosis and treatment of CHF in recent years, 40% of patients are rehospitalized or die within 1 y of diagnosis, and approximately 50% of patients die within 5 y [1]. To improve the treatment efficacy and survival rate and decrease the rehospitalization rate and healthcare costs, the European Society of Cardiology (ESC) and American College of Cardiology/American Heart Association (ACC/AHA) have recommended strengthening the monitoring of patients undergoing treatment for CHF [2].

Akosah et al. [6] reported that the rate of ACEI application among patients with CHF was 34-35% after discharge but only 38% after 1 y of outpatient treatment. After strengthening outpatient management, this rate increased to 84%, and the annual mortality and hospitalization rates decreased from 42% to 21%. The results of a study by Leung et al. [8] showed that the percentage of patients who reached the guidelinerecommended target ACEI/ARB and β-blocker doses was significantly higher in the management group than in the conventional treatment group (P<0.05). A few foreign studies [13-15] have demonstrated that among patients with HF, the percentage of patients achieving the target ACEI/ARB and β- blocker doses recommended by guidelines was higher among the group with management than among the group without management, although this factor did not significantly decrease the hospitalization and death rates, in contrast to the findings of this study. This discrepancy might be attributable to short-term patient follow-up, poor compliance of patients in the absence of regular outpatient follow-up, and the lack of multicenter and large-scale clinical research.

Ho et al. [16] reported significant correlations of medication compliance with the cardiovascular event-related rehospitalization rate, all-cause mortality, and cardiovascular death among patients with HF. A large number of foreign studies have shown that post-discharge CHF management could significantly improve drug utilization and decrease the rate of CHF-combined endpoint events [17-22]. Numerous studies have also shown that among patients with CHF, treatment compliance was significantly higher in the management and intervention group than in the control group (P<0.05), consistent with the results of our study.

Berg et al. [23] telephonically followed up 533 patients with CHF over a 1-year period; the results showed that the HFrelated rehospitalization rate and emergency admission rate of the follow-up group were 44% and 22% lower, respectively than those of the control group, and follow-up was associated with a total medical care cost reduction of $1792. A metaanalysis conducted in Europe indicated that management and intervention could decrease the rates of HF aggravation or other cardiovascular event-related rehospitalization by 30% and the rates of rehospitalization and death-combined endpoint events by 18% [24]. Akosah et al. [6] followed up patients with HF for 12 months after discharge and found that the rehospitalization rate and death-combined endpoint event rate decreased by 20% within 3 months, and by 22% at 1 year. In the present study, although group S had significantly higher outpatient expenditures, this group had reductions in both the rehospitalization rate and hospitalization expenditures, resulting in a lower overall medical cost compared to that of group R, in agreement with the results of foreign studies.

In summary, in addition to significantly reducing the rates of rehospitalization and mortality and improving patients’ prognoses and quality of life, the strengthening of clinical management and intervention might also conserve medical resources within the social healthcare system.

This work was funded by Science and Technology Research Projects of Xinjiang Production and Construction Corps (No. 2011BA048).