Impact of maternal nutrition on birth weight of babies.

This is a cross-sectional and descriptive study of pregnant mothers who delivered in four randomly selected health facilities in urban Abeokuta, Nigeria. The study examined the influence of maternal nutritional status on newborn birth weight and particularly low birth weight (LBW). Five hundred and twelve pregnant mothers booked for antenatal care and were attending antenatal clinics were recruited for the study as they became available. Complete physical examination, clinical profile along with weight, biochemical and haematological measurements were carried out. Data were analyzed using descriptive statistics and chi-square test. The mean weight gain of the pregnant mothers in this study was 7.78 ± 1.01 kg. Weight gain in pregnancy, maternal haemoglobin, mean corpuscular haemoglobin concentration, serum cholesterol and serum albumin were all found to be significant for LBW (p<0.001). Maternal nutritional status impacted significantly on newborn birth weight as poorly nourished mothers were observed to produce a higher percentage of LBW babies when compared to those who were better nourished.

Birth weight (BW) is the single most predictive factor of mortality in the first few months of life [1], and a baby's birth weight is an important indicator of his health. The World Health Organization (WHO) defined low birth weight (LBW) as that below 2,500gm [2]. It is a major public health problem in most African countries [3], and in most developing countries, being associated with a high incidence of neonatal mortality in these regions. In India 85% of neonatal mortality is associated with LBW, 87% in Guatemala and 56% in North Acrot [4]. It is estimated worldwide that 25 million LBW infants were born in 1990, making up to 18% of all live births, 90% of which occurs in developing countries [5]. LBW babies are at the greatest risk in early childhood. BW below 2.5kg reflects intrauterine malnutrition involving micro-nutrient deficiencies, infections such as malaria and syphilis, and maternal malnutrition. The incidence of LBW is therefore a powerful indicator of infant survival, and indirectly of the mother’s nutritional status [6]. In Nigeria, the average prevalence of LBW is estimated to be about 16%, with a range of 6-21% [7]. The immediate consequences are higher morbidity and mortality rates in the perinatal and neonatal periods [8]. The late consequences may include prolonged impairment of immunological defense mechanisms [9], and neurological sequelae [10] which interfere with the normal development of the child and on a national level, are serious obstacles to development. Among the causes of LBW, maternal malnutrition has been identified as one of the main determinants [11]. Maternal morbidity during pregnancy is highly prevalent in the low socio-economic groups [12] and protective mechanisms such as the bactericidal zinc peptide system in the amniotic fluid [13], may be impaired partly because of malnutrition during pregnancy [14].

This study was therefore designed to investigate the effect of maternal nutritional status on the BW of the newborn in urban Abeokuta, Nigeria.

This is a cross-sectional and descriptive study design for booked pregnant mothers who delivered in four randomly selected health facilities in urban Abeokuta, Nigeria. The study was carried out between January and September, 2012. The subjects were selected from each health facility as they became available. Five hundred and twelve randomly selected pregnant mothers attending antenatal clinics in the health facilities were booked and advised to report regularly for antenatal care. Complete abdominal examination, clinical profile along with height, weight, weight gain in pregnancy, blood pressure, haematological and biochemical examinations were carried out. All the newborns were weighed and their general physical conditions assessed immediately following delivery. All infants weighing below 2.5 kg were recorded as low birth weight (LBW) babies.

Data were collated according to the various maternal nutritional characteristics included in the study. Analysis was carried out using descriptive statistics and chi-square test of significance was employed in testing for association between two variables.

The mothers’ weights were measured before and immediately after delivery of the baby, placenta and membranes. Primiparous mothers were found to gain significantly less weight than multiparous mothers (p<0.05). 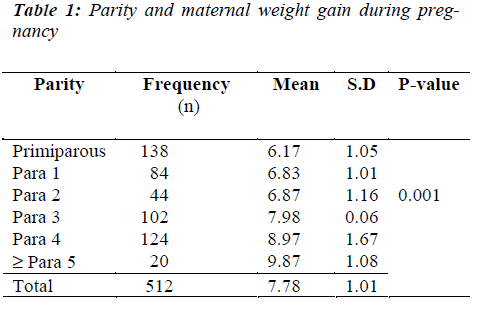 Triceps skin fold thickness of the mothers as measured using a Harpenden caliper was expressed as a percentage of normal values [15]. This variable indicates the amount of adipose tissue in the upper arm, with primiparous mothers recording lower percentage than the multiparae.

Table 4: Nutritional status and haematological data of the mothers

Low birth weight (LBW) is a major public health problem due to its association with high morbidity and mortality of infants. Newborn mortality and disease are directly related to birth weight (BW), and insufficient or excess weight at birth is always accompanied by an increase of these risk factors. The relationship between weight gain in pregnancy and newborn birth weight has been known for several decades [16], and even now its importance to pregnancy outcome is being increasingly recognized. This importance is reflected in the recommendation that pregnant women should be encouraged to gain at least 11kg during gestation [17].

Results from this study have shown that several maternal nutritional parameters: weight, weight gain in pregnancy, triceps skin fold thickness, serum albumin and anaemia (low Hb and MCHC levels) significantly influenced the BW of infants. Primiparous mothers were shown to be at particular risk of delivering LBW babies. This agrees with previous works on pregnancy weight gain in that mothers with higher weight gain in pregnancy delivered lesser number of LBW babies [16]. Mothers whose Hb was below 7g% were associated with the highest percentage of LBW, while with increasing maternal Hb level, LBW incidence decreased. This is also in conformity with results from studies by earlier researchers [18] and [19].

In conclusion, this study has established that maternal nutritional status impacted significantly on newborn birth weight, as poorly nourished mothers were observed to produce a higher percentage of LBW babies in comparison to those who were better nourished. The challenge of addressing the problem therefore remains an urgent imperative for development.