Impact of different concentrations of 1,25(OH)2D3 on expressions of AdipoR2, p38MAPK, LPL, and triglyceride in HepG2 cells

The aims of this study were to observe the effects of different concentrations of 1, 25 dihydroxyvitamin D3 (1,25(OH)2D3) on the content of Triglyceride (TG), as well as the gene and protein expressions of Adiponectin receptor 2 (AdipoR2), p38 Mitogen-Activated Protein Kinase (P38MAPK), and Lipoprotein Lipase (LPL) in TG’s metabolic pathway, in the HepG2 cells so as to provide theoretical basis for further studying the mechanism by which Vitamin D reduces TG. The HepG2 cells were treated with different concentrations of 1,25(OH)2D3 0 ng/ml (CON), 12.5 ng/ml (L-dose), 25 ng/ml (M-dose), and 50 ng/ml (H-dose)) for 24 h, respectively, and then detected the gene and protein expressions of AdipoR2, p38MAPK, and LPL by Real-Time Polymerase Chain Reaction (RT-PCR) and Western blotting, as well as the content of TG by the enzyme method. Compared with Group CON, the gene and protein expressions of AdipoR2, p38MAPK, and LPL in Group L, M, and H-dose were all increased while the contents of TG were decreased (P<0.05). The levels of 1,25(OH)2D3 decreases the TG content in the HepG2 cells may be achieved by upregulating the expressions of AdipoR2, p38MAPK, and LPL.

Vitamin D (VD) is a multi-functional vitamin, and in addition to participating in regulating the in vivo metabolism of Ca and P and osteogenesis, it can also inhibit cell growth and regulate immune function [1]. Recent studies have found that the level of VD exists certain relationships with the level of blood lipids [2,3]. Wang found a significant negative correlation between serum VD and Triglyceride (TG) in a study targeting Chinese populations [4]. It has also been confirmed that VD has certain protective effects against the livers in diabetic rats [5]. Active VD, namely 1, 25 dihydroxyvitamin D3 (1,25(OH)2D3), can reduce the liver fat content in mice [6]. However, the mechanism by which 1,25(OH)2D3 regulates the lipid metabolism has not been fully elucidated. Adiponectin receptor 2 (AdipoR2), p38 Mitogen-Activated Protein Kinase (p38MAPK), and Lipoprotein Lipase (LPL) are the key genes in the metabolic pathway of glycolipid, which play important roles in lipid metabolism, Insulin Resistance (IR), etc., and can lead to the occurrence of IR via direct or indirect channels. Therefore, in-depth studies in this field can be helpful to elucidate the molecular mechanism of IR. The impact of 1,25(OH)2D3 on the expressions of AdipoR2, p38MAPK, and LPL in in vitro hepatocytes has not been reported in China or abroad. Therefore, this study investigated the impact of 1,25(OH)2D3 on the expressions of AdipoR2, p38MAPK, and LPL, as well as the content of TG, in the HepG2 cells, aiming to preliminarily investigate the dose-dependent relationships of 1,25(OH)2D3 with AdipoR2, p38MAPK, LPL, and TG and to provide theoretical basis for further studying the mechanism by which vitamin D regulates the metabolism of TG in the HepG2 cells.

HepG2 cells were purchased from the Chinese Academy of Medical Sciences Concord Cell Center. 1,25(OH)2D3 was purchased from American R & D Company. Dulbecco Minimum Essential Medium (DMEM) and fetal bovine serum were purchased from American Life Technologies. The HepG2 cells were incubated in 10% FBS-containing DMEM medium at 37°C and 5% CO2, with the culture medium changed once every 2-3 d. When the cells fused to about 90% of the area, the cells were passaged and then incubated with different concentrations of VD (0 ng/ml, 12.5 ng/ml, 25 ng/ml, 50 ng/ml) for 24 h. The HepG2 cells (grew well, 80%) were then sampled for trypsin digestion, and kept subculture in 6-well culture plates with the cell density as 2 × 105 cells/ml until the cells adhered to the plate wall. The cell density was then microscopically adjusted to 5000 cells/well, followed by PBSrinsing twice, and cultivation in serum-free DMEM.

TG Assay Kit (purchased from Zhong Sheng Bei Kong Biotechnology Co., Ltd. China), dimethyl sulfoxide (DMSO) was purchased from Shanghai Boyao Biotechnology Co., Ltd., China. Taq enzyme was purchased from American Life Technologies. After absorbed the medium in each well, 2 ml of pre-cooled PBS buffer was added and shaken gently several times so as to remove the culture medium as much as possible (twice). After rinsing, the appropriate amount of PBS buffer was added so as to scrap the wall-adherent cells and transfer them into new pre-cooled centrifuge tubes for 10 min centrifugation (1000 r/min at 4°C); after discarded the supernatant, 200 μL of isopropanol was then added to extract the cell lipid. After several repetitive freeze-thaw at -70°C/ 37°C, the totally broken cells (microscopically confirmed) were centrifuged at 9000 r/min for 10 min. The supernatant was then transferred to another clean 1.5 ml centrifuge tube, added 20 μL of 1 mol/L NaOH to dissolve the protein precipitate in the tube for at least 12 h, and determined the protein content by the BCA method. The TG detection agent was then added and incubated at 37°C for 30 min. The TG concentration was then calculated by comparing the absorbance (A) value with those of the standards; the TG concentration was divided by the protein concentration so as to calculate the intracellular TG content (unit: mg/g).

20 μL reaction system to extract the total RNA (the primer sequences are shown in Table 1). Procedures: reaction conditions: pre-denaturalization at 95°C for 5 min, denaturalization at 95°C for 30 s, annealing at 58°C~75°C for 30 s, extension at 72°C for 1 min, for 28~33 cycles, extension at 72°C for 5 min. In order to correct the errors, this study used the housekeeping gene β-actin as the internal reference, and the relative content of the target gene was obtained by dividing the average copy number of the target gene of the sample by the average copy number of the internal reference gene of this sample. The copy number of the template in samples can be calculated according to its related SDS-generated Ct value from the standard curve.

AdipoR2, p38MAPK, LPL were purchased from Santacruz (Shanghai Golden Bank Biological Technology Co., Ltd, China). The second antibody and cell protein extraction kit were purchased from Takara (Economic and Technological Development Zone, Dalian City, Liaoning Province, China). Impact of different concentrations of 1,25(OH)2D3 on the expressions of AdipoR2, p38MAPK, and LPL in the HepG2 cells by Western blotting. The above-treated cells were collected, rinsed three times with cold PBS, and then extracted 30 μg of proteins by protein lysate for 12% Polyacrylamide Gel Electropheresis (PAGE). After the electrophoresis, the products were transferred onto one Polyvinylidene Fluoride (PVDF) membrane, followed by overnight incubation with the primary antibodies of β-actin (1:1000), AdipoR2 (1:1000), p38MAPK (1:1000), and LPL (1:300), film rinsing, 50 min incubation with the HRP-labeled secondary antibody (1:1000), alkaline phosphatase staining, and exposure. The relative expressions of AdipoR2, p38MAPK, and LPL were expressed by the ratios of their respective gray values to the gray value of β-actin.

SPSS19.0 was used for the statistical analysis. The mRNA and protein levels of AdipoR2, p38MAPK, and LPL and the TG content were expressed as (͞x ± s). The normally distributed data were then applied ANOVA and pairwise comparison for analyzing the differences among them.

Gene and protein expressions of AdipoR2, p38MAPK, and LPL 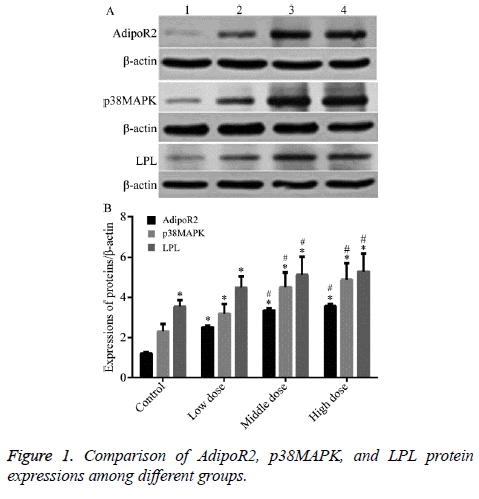 In addition to regulating the in vivo Ca and bone mineral balance, VD can also participate in the processes of body inflammation, autoimmune response, or synthesis and secretion of insulin [1]. Studies have shown that patients with type 2 diabetes exhibit significantly increased sensitivity of insulin and significantly improved blood lipid metabolism with the elevation of in vivo VD [7-9]. Furthermore, VD can effectively prevent the occurrence and development of type 2 diabetes [10]. The liver is the target organ of in vivo insulin, and plays important roles in maintaining stable blood glucose and IR formation. IR promotes a large number of free fatty acids to enter the liver, in which they are activated to acyl CoA and form TG through combining with glucosylated phosphonate glycerol; however, there has been no report about the specific mechanism of VD’s regulatory roles against TG currently. The results of this study show that 1,25(OH)2D3 has no significant effect on cholesterol in the HepG2 cells, but the TG content is significantly decreased. The mechanism may be explained as that active VD promotes the lipid transfer and reduces the accumulation of TG in liver tissues, consistent with related foreign research [11]. However, whether VD affects the level of TG in the liver through regulating the expressions of such lipid metabolism related genes as AdipoR2, p38MAPK, or LPL has not been reported in China or abroad yet, so this study observed the impact of different concentrations of 1,25(OH)2D3 on the levels of AdipoR2, p38MAPK, LPL, and TG in the HepG2 cells so as to explore the regulatory mechanism of 1,25(OH)2D3 toward TG in the HepG2 cells.

A large number of studies have shown that as an important member of the MAPK family, the p38MAPK signaling pathway not only plays important roles in inflammation and stress response but also is involved in cell survival, differentiation, and apoptosis, so it’s considered as the transduction x station of a large number of intracellular pathways. IR, high levels of free fatty acids, and inflammatory cytokines can all activate the p38MAPK signaling pathway [12]. The activation of the p38MAPK signaling pathway can increase the level of Adiponectin (APN), which then plays the role of reducing liver TG content by binding to AdipoR2 [13]. Studies have shown that high-fat high-energy diet can promote the expression of AdipoR2 in rat liver tissue [14], thus leading to dyslipidemia [15]. The changes of AdipoR2 may be involved in liver fat deposition and IR formation [16], and the AdipoR2 polymorphic receptors are significantly associated with the accumulation of liver TG [17,18]. On the other hand, the p38MAPK signaling pathway can activate the Peroxisome Proliferator-Activated Receptor-α (PPAR-α), and the latter plays an important role in the regulation of lipid metabolism. LPL, involved in the transportation and oxidation of fatty acids, is a target gene of PPAR-α. PPAR-α regulates the expression of LPL [19], and as one hydrolase of TG, LPL is one of the key enzymes toward lipid metabolism and mainly hydrolyzes TG in Chylomicrons (CM) and Very Low Density Lipoprotein (VLDL). The structure and activity abnormalities of LPL can lead to TG-based lipid metabolism disorders, followed by subsequent glucose metabolism disorders and IR [20,21]. At the same time, animal experiments using LPLknocked heterozygous mice have shown that: with age increase, glucose and lipid metabolism disorders in mice increase, and IR increases significantly [22]. Therefore, TG metabolism may be related to the expressions of AdipoR2, p38MAPK, and LPL in the liver.

This study were supported by the National Natural Science Foundation of China (81460168), Projects of Guizhou Science and Technology Foundation (Qiankehezi J LKZ (2013) No. 19) and PhD Starting Foundation of Zunyi Medical College ((2012) F-574). 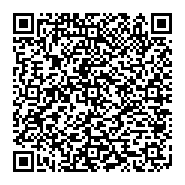