High rates of psychiatric disorder have been documented in patients with gastrointestinal (GI) symptoms. The aim of this study was to examine the prevalence of gastrointestinal (GI) symptoms among the general adult population and to determine if psychological dis-tress such as depression and anxiety disorder is associated with gastrointestinal disorders. This is a cross sectional study conducted during the period September 2009 to May 2010 at the Primary Health Care Centers of the Supreme Council of Health, State of Qatar. A total of 1208 patients aged 20 years and above were approached and 934 patients (77.3%) participated in this study. The study was based on a face to face interview with designed diagnostic screening questionnaires for GI symptoms, Patient Health Questionnaire (PHQ-9) for depression and General Anxiety Disorders (GAD-7) for anxiety. The ques-tionnaire consists of questions about symptoms and signs of anxiety and depression disor-ders. Also, socio-demographic characteristics, life style habits and family history of pa-tients were collected. Of the studied subjects, 62.1% were males and 37.9% were females. Out of 934 subjects interviewed, the prevalence of gastrointestinal symptoms was 41.1%. Most of the sufferers with GI symptoms were male patients (69.8%) and in the age group 45-54 years (39.6%). The prevalence of severe levels of depression was nearly twofold (8.6%) in GI patients compared to their counterparts (4.5%). The prevalence rate of anxi-ety was higher in sufferers of GI symptoms (21.4%). Mental health severity (mean ± SD) was significantly higher in male patients with GI symptom compared to females; depres-sion (7.9±4.2 vs. 6.9±4.5, p<0.001) and anxiety 7.0±3.6 vs. 6.1±3.6, p=0.001). More than de-pression, anxiety was more common in patients of GI symptoms of constipation (22.3%), upper dysmotility (21.4%) and diarrhoea (20.7%). The present study findings revealed that the prevalence rate of gastrointestinal disorders is high in the primary care settings. Also, GI symptoms are associated significantly with depression and anxiety. Anxiety was more common than depression in GI patients

Gastrointestinal symptoms are very common in the gen-eral population and a frequent reason for consulting a health care professional [1]. In Western countries, GI symptoms are very common and are reported within three months by almost every other adult [2,3]. Gastro-intestinal disturbances commonly include symptoms of stomach pain, heart burn, diarrhoea, constipation, nau-sea and vomiting. In the United States, abdominal pain accounts for more than 10 million clinical visits annu-ally [4]. In the Netherlands, digestive diseases occur in 2 million of the country’s citizens annually, and make up 13% of the total mortality, 12% of the hospital admis-sions and 17% of total hospital days [5]. Many patients with irritable bowel syndrome (IBS) or other functional gastrointestinal disorders present extraordinary man-agement problems for physicians. The impact of GI may be very psychological and stress provoking. It was re-ported that higher rates of psychiatric co-morbidity occur with the functional bowel disorders that are particu-larly high in community populations [6]. An estimated 57 million adults suffer from anxiety disorders [7]. De-pression and anxiety have been implicated in several chronic physical illness including gastrointestinal disor-ders, heart diseases and chronic respiratory disorders. Comorbid psychiatry disorders can adversely influence the management and outcome of GI disorders particu-larly health-related quality of life [8]. Mental disorders are common in all countries and cause immense suffer-ing [9].

Psychiatric disorders are prevalent in medical practice, especially in primary care, where as many as one-third of patients may suffer from one or more current diag-nosable psychiatric disorders, especially depressive and anxiety disorders [10]. Two recent studies done in Qatar by Bener [11,12] revealed that depression and anxiety were more prevalent in Qatari population and a good proportion of sufferers with anxiety and depres-sion were quite disturbed in their day to day life. Over the past two decades, the State of Qatar has experienced a rapid transition in its socio-economic status and wit-nessed rapid change in many aspects of life. Similarly, several changes in factors associated with the develop-ment and treatment of GI disorders have taken place. Although these changes might have altered the aetiology and prevalence of underlying disorders, GI symptoms are still very common in the general population. In line with the rapid life style changes among population, the prevalence of overweight and obesity is increasing. These developments strengthened the need for a re-search on the current prevalence of GI symptoms in the general population and its association with the psycho-social factors.

This is a cross-sectional study based in the primary health care centers (PHC). The survey was conducted among the population residing in the State of Qatar from September 2009 to May 2010. Primary health care centers are frequented by all levels of the general popula-tion as a gateway to specialist care. The study was ap-proved by the Hamad General Hospital, Hamad Medical Corporation. All human studies have been approved by the Research Ethics Committee and have been per-formed in accordance with the ethical standards laid down in the 1964 Declaration of Helsinki.

A multistage stratified random sampling design was developed using an administrative division of the Qatar into 21 primary health care centers in terms of number of inhabitants. Of these health centers, 10 health centers in urban areas and 3 health centers in semi-urban areas were visited mostly by Qatari people and remaining health centers were excluded from the survey. Also, we have selected 13 health centers representing geographi-cally and have taken equal proportion of subjects from these selected health centers according to the inhabitants in that district. The sample size was determined on a priori presumption that the prevalence rate of somatisa-tion in Qatar would be more or less similar to rates found for several other countries in the Arabian Gulf and Eastern Mediterranean [11-12], where the reported prevalence of GI symptoms among adults ranged from 20 to 25%. Assuming the prevalence of depression and anxiety disorders to be 22.5%, with the 99% confidence interval for an error of 3% at the level of significance, a sample size of 1208 subjects would be required to meet the objectives of the study. During the study period, 1208 subjects were approached, of whom 934 subjects responded to the questionnaire, with a response rate of 77.3%. The survey instrument [13-14] was tested on 100 patients who visited the health centers and thus validated the questionnaire. The study excluded pa-tients below 20 years and above 65 years, patients with any cognitive or physical impairment and who refused to give consent to take part in the study.

Student-t test was used to ascertain the significance of differences between mean values of two continuous variables. Chi-square analysis was performed to test for differences in proportions of categorical variables be-tween two or more groups. In 2x2 tables, the Fisher's exact test (two-tailed) replaced the chi-square test if the assumptions underlying violated, namely in case of small sample size and where the expected frequency is less than 5 in any of the cells. The level p<0.05 was considered as the cut-off value for significance. 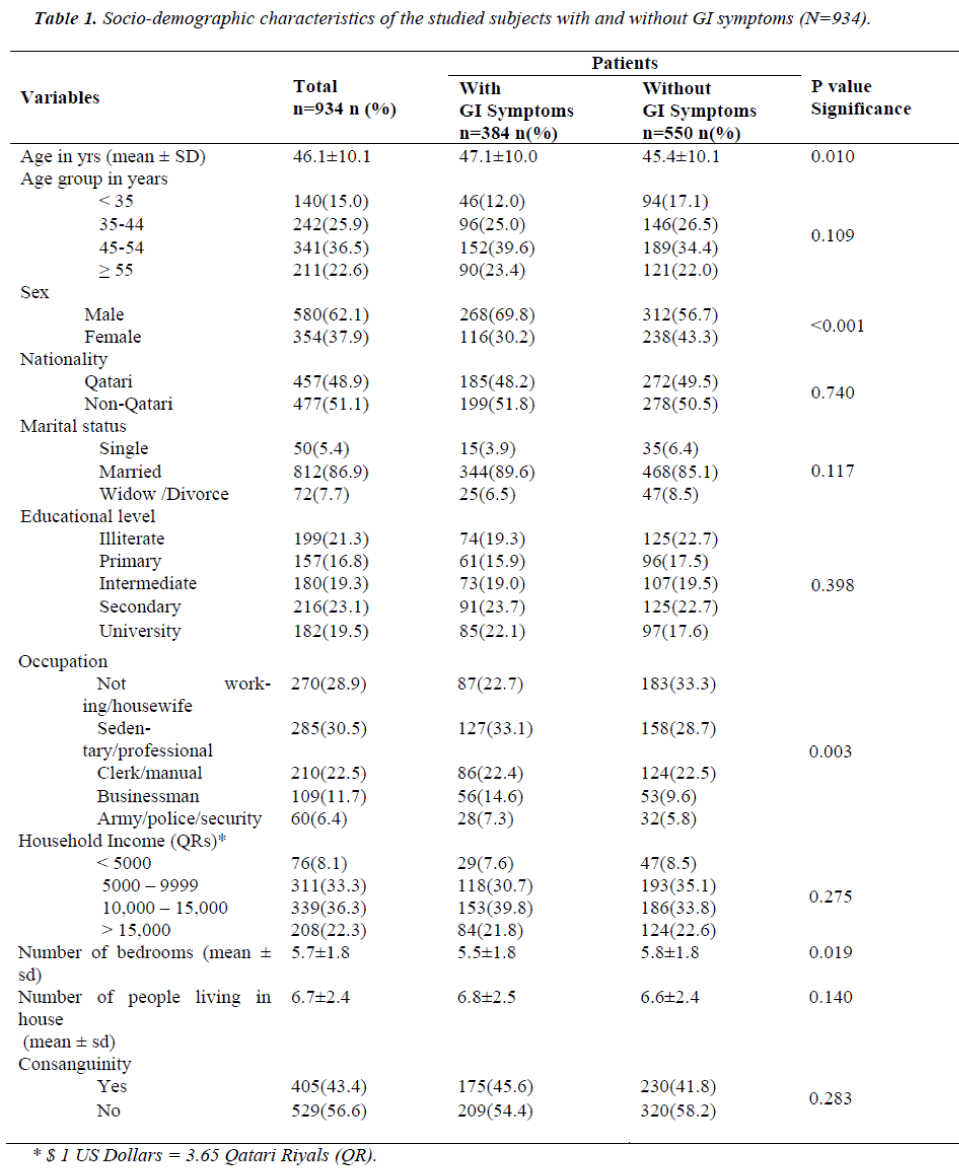 Table 1: Socio-demographic characteristics of the studied subjects with and without GI symptoms (N=934). 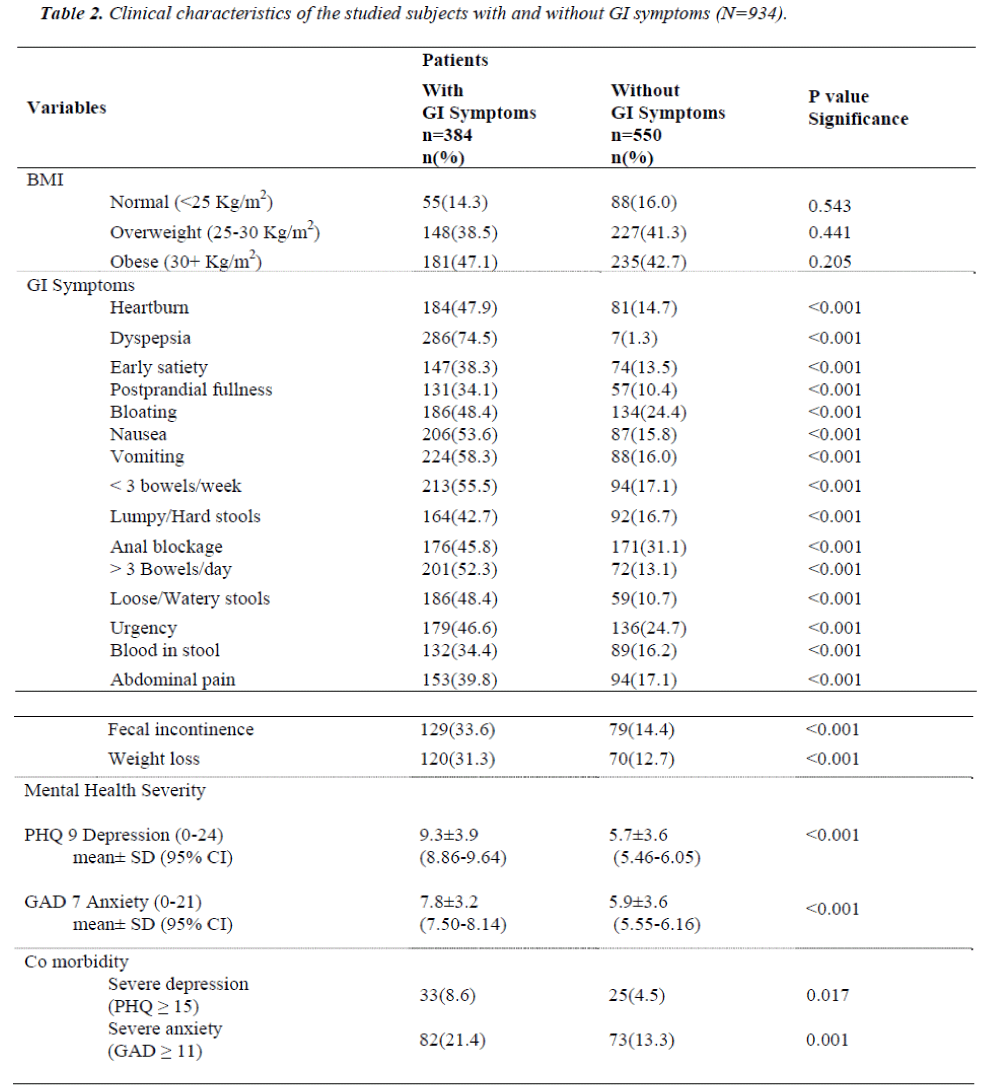 Table 2: Clinical characteristics of the studied subjects with and without GI symptoms (N=934). 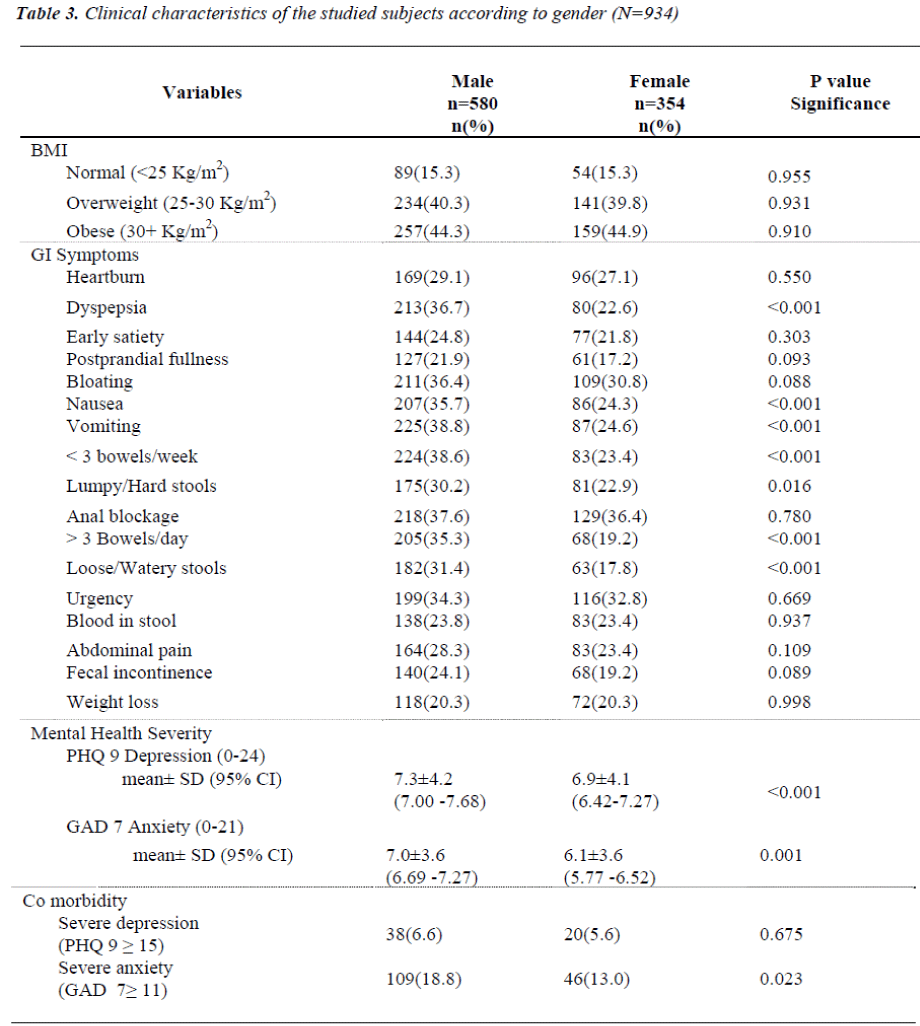 Table 3: Clinical characteristics of the studied subjects according to gender (N=934) 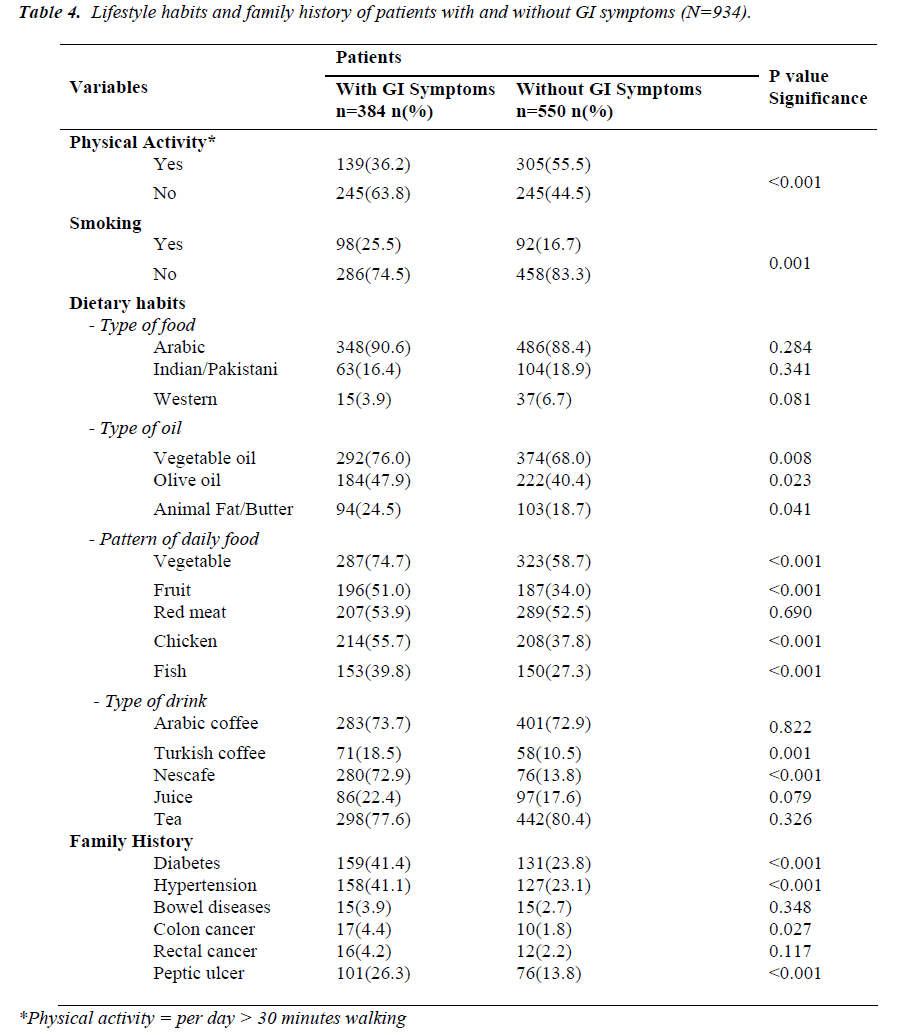 Table 4: Lifestyle habits and family history of patients with and without GI symptoms (N=934).

Figure 1 reveals the distribution of severe levels of de-pression and anxiety in patients with GI symptoms. Prevalence of anxiety was observed more in patients with GI symptom of constipation (22.3%), followed by upper dysmotility (21.4%) and diarrhoea (20.7%) (p<0.001). The prevalence of depression was similar in all the reported GI symptoms; constipation (8.6%), up-per dysmotility (8.1%), diarrhoea (8%) and oesophagal symptoms (7.9%). 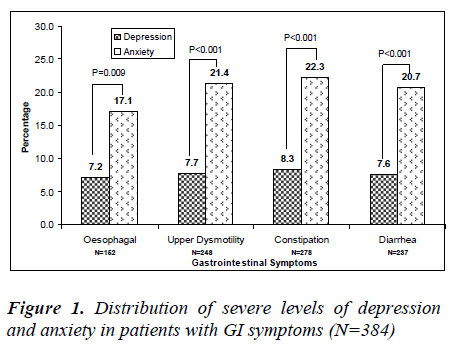 Figure 1: Distribution of severe levels of depression and anxiety in patients with GI symptoms (N=384)

In the present study, men were more likely than women to be adversely affected by GI symptoms (69.8%). On the contrary, in the U.S [20], women are twice as likely as men to be diagnosed with the irritable bowel syn-drome as well as in other western countries. In other country like India [20], an equal number of men and women are diagnosed with GI symptoms. A recent study by Longstreth et al [21] also supported this result that Irritable bowel syndrome, which is one of the most common and well studied of the functional gastrointes-tinal disorders, occurred in women twice as frequently as in men. Among the studied patients, most of the GI sufferers were in the age group 45-54 years (39.6%). Another study revealed similar results that mean age of the participating patients with GI symptoms was found 46.3 years [4]. These study findings support each other that GI symptoms are a major problem in the commu-nity.

In the present study, the most bothersome GI symptoms were dyspepsia (74.5%), vomiting (58.3%), <3 bow-els/week (55.5%) and >3 bowels/day (52.3%). In an-other study, the most frequently reported gastrointestinal symptoms were bloating (37%), abdominal rumbling (40%), alternating solid and loose faeces (31%) and strong urgency (24%) [22]. Similar GI symptoms were noted by Creed et al in his study that the most common GI disorder was Irritable bowel syndrome, which comes in three general forms, namely constipation, diarrohoea and alternating diarrhoea and constipation [23]. But in few studies, the reported GI symptoms were upper ab-dominal pain or discomfort ranged from approximately 8% to 54%, while the prevalence of heartburn ranged from 10% to 48% [24].

The present study findings have shown that primary care patients with GI symptoms have adverse health behaviour such as obesity, sedentary life style and smo-king. For example, physical activity (36.2% vs. 55.5%) was significantly less frequent in GI patients, while smoking (25.5% vs. 16.7%) was significantly higher in them compared to their counterparts. GI patients were more obese (47.1%) than patients without GI symptoms (42.7%). A high body mass index and the life style hab-its that precede that are associated with the development of both upper and lower gastrointestinal symptoms, such as regurgitation, gastro-oesophageal reflux and altered bowel movements [25].

These findings suggest that mental disorders in patients with GI symptoms are not merely a consequence of se-lection bias in patients, but connected to the symptoms themselves. These study findings suggest that anxiety disorders in GI patients should not be ignored and could be considered with depression when developing strate-gies for screening and intervention, particularly in pri-mary care. Future studies are needed in primary care populations where prevalence of psychiatric illness are probably high.

The study findings revealed that gastrointestinal symp-toms were considerably high in Qatar population which is consistent with previous studies done in the primary care setting. Most of the GI sufferers were in the age group 45-54 years. In this population study, there was a strong relationship between gastrointestinal symptoms, anxiety disorder and depression. Patients with GI symp-toms had significantly higher mean score of depression and anxiety. The prevalence of severe levels of anxiety and depression was considerably higher in patients with GI symptoms.

This research was supported by the by the Qatar Na-tional Research Fund- QNRF NPRP 30-6-7-38. The sponsor of the study had no role in study design; in the collection, analysis and interpretation of data; in the writing of this report; and in the decision to submit the paper for publication.

All authors declare that they have no conflicts of inter-est.

This study was generously supported and funded by the Qatar National Research Fund- QNRF NPRP 30-6-7-38. The authors would like to thank the Hamad Medical Corporation for their support and ethical approval (ref: RP#7100/07).