Impact of C/EBP homologous protein in the diagnosis of acute pancreatitis.

Over the last twenty years, the overall rate of hospitalization in cases of acute pancreatitis (AP) increased by 100% in the United States [1]. While approximately 20% of patients experience a severe attack of AP, in the majority of cases, the clinical course of AP is mild and resolves without sequelae. In the severe cases of AP, however, there may be significant morbidity and mortality. These serious outcomes are caused by diverse local and systemic complications, and an intensified inflammatory response that may lead to multiorgan failure and/or pancreatic necrosis [2].

Diagnostic studies may prove to be more useful if patients at the greatest risk can be identified earlier, allowing for more timely interventional or medical treatment, which in turn leads to decreased rates of mortality [3]. Several biological markers and clinical events have been used in previous studies to predict AP mortality [4].

The C/EBP homologous protein (CHOP), also known as G1 arrest DNA damage 153 (Gadd153), is the 19.2-kDa protein product of DNA damage-induced transcript 3 (Ddit3). It is a key regulator of stress responses and it is known to have a significant role in the induction of apoptosis. CHOP-deficient (Chop-/-) cells are resistant to endoplasmic reticulum (ER) stress-induced apoptosis while CHOP overexpression develops apoptosis in several cell lines [5]. We began this study with the hypothesis that CHOP plays an important role in acute pancreatitis.

Thirty-two cases of AP, who were admitted to the Department of Emergency Medicine of the Bezmialem Vakif University between November 2013 and July 2014, were analyzed. The diagnosis of AP was made based on characteristic signs and symptoms (upper abdominal pain with or without guarding and/or rebound tenderness), increased serum enzyme levels, and abnormal findings on diagnostic imaging (ultrasound and/or contrast-enhanced computed tomography [CT]). On admission to the hospital, the following laboratory measures were performed on each patient: serum amylase, C-reactive protein, RDW, white blood cell count (WBC), platelet count, hematocrit, calcium, blood glucose, creatinine, blood urea nitrogen (BUN), total bilirubin, alkaline phosphatase, lactate dehydrogenase, γ-glutamyl transferase, alanine aminotransferase, and aspartate aminotransferase.

Blood samples from each patient were collected from the antecubital vein by careful venipuncture using a sterile 21 G syringe. Except for the whole blood count, the samples were analyzed within 20 minutes. For platelet indices, the samples were collected in dipotassium EDTA tubes and analyzed with an automatic blood counter (Beckman Coulter) within 5 minutes. Samples for SCUBE1 and sCD40L were collected in ice-chilled disposable polypropylene tubes containing EDTA (1 mg/ml) in order to minimize degradation. For 10 minutes, the blood samples underwent centrifugation in gel-containing vacuumed biochemistry tubes at 3000 rpm for ten minutes. This allowed for separation and the serum which was stored in Eppendorf tubes at -80° C.

The microtiter plate in the kit was pre-coated with an antibody specific to CHOP. Next, using a biotin-conjugated polyclonal antibody preparation specific to CHOP, the samples were added to the appropriate microtiter plate wells and Avidin-conjugated to Horseradish Peroxidase (HRP) was added to the microplate wells and incubated. After this, a TMB substrate solution was added to each well. A change in colour occurred only in the wells containing all three of the following: CHOP, biotinconjugated antibody and enzyme-conjugated Avidin. The addition of a sulphuric acid solution was used to terminate the enzyme-substrate reaction and the colour change was measured using spectrophotometry at a wavelength of 450 nm 2 nm. Finally, CHOP concentration in the samples was determined by comparing the O.D. of the samples to the standard curve.

The enzyme-linked immunosorbent assay (ELISA) method was used to measure the CHOP levels. The specific ELISA kit was Uscnlife, cat no:E9115h; Wuhan, PRC and it was used according to the manufacturer’s protocols. Chemwell Awareness Technology Inc. was used to measure the absorbance of samples at 450nm. The results were expressed in ng/ml.

SPSS software for Windows (version 15.0) was used for the analysis of data. Mean ± standard deviation was used to report continuous variables from the study groups. The Mann-Whitney U-test was used to compare continuous variables. The Chi-square test was used to compare categorical variables. Associations between variables were evaluated using Pearson correlation coefficients. To determine the discriminative ability of CHOP in patients with acute pancreatitis, the area under the receiver operating characteristics (ROC) curve was used. Sensitivity, specificity, negative predictive value, and positive predictive value were calculated according to the ROC curves. A p-value less than 0.05 was considered statistically significant. 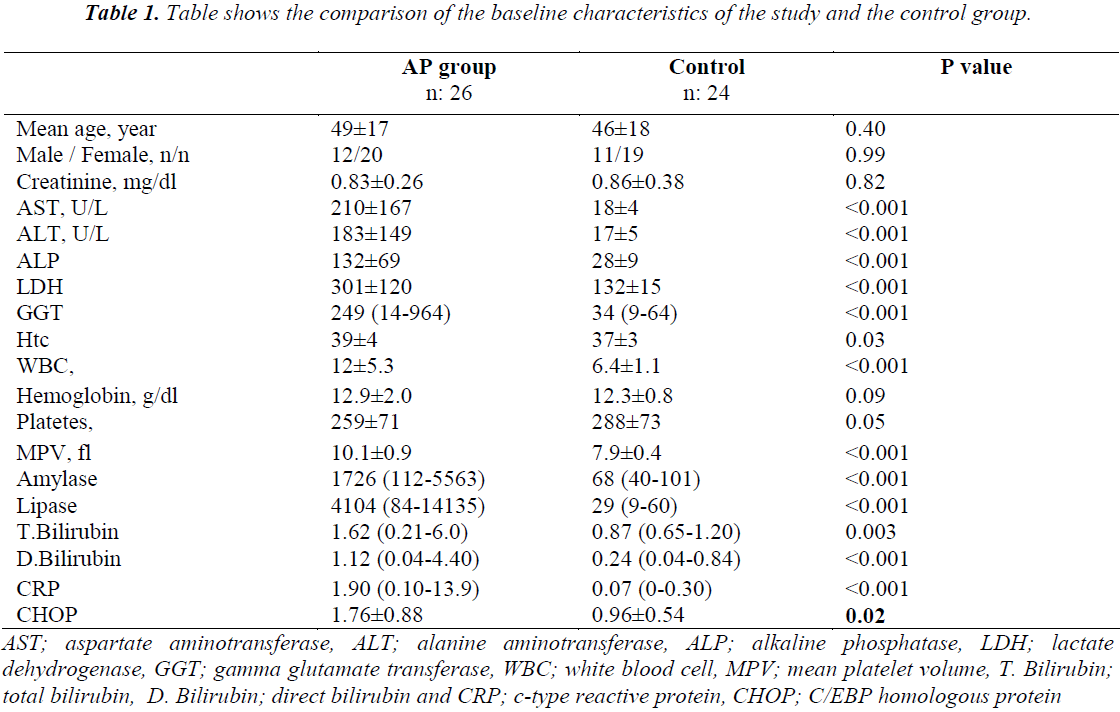 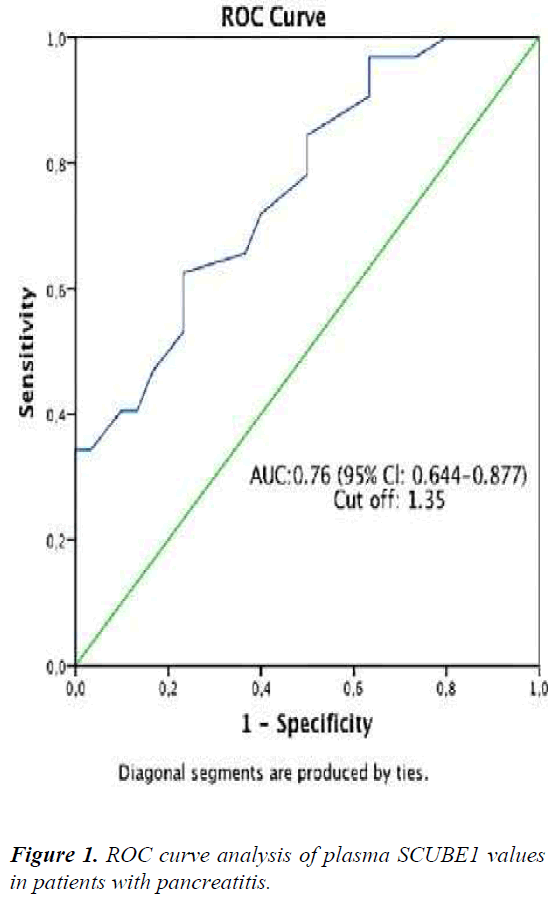 Acute pancreatitis (AP), which is an inflammatory disorder of the exocrine pancreas, has a range of severity in which the most critical cases causes considerable morbidity and mortality [6]. One of the major pathologic consequences of AP is parenchymal cell death. Mild AP is generally believed to be associated with extensive apoptosis, while severe AP is primarily associated with necrosis and relatively little apoptosis [7-9].However, the mechanisms, which regulate cell death, are still unclear. A number of studies have shown that some proteins, such as GRP78, cause stress in the endoplasmic reticulum (ER) [10-12]. ER stress signaling and increased GRP78 have been concurrently observed in AP. On both posttranscriptional and posttranslational levels, CHOP expression is firmly regulated. CHOP levels increase as a result of stress, such as hypoxia, nutrient deprivation, and protein misfolding or malfolding, in the ER and mitochondria [13-17].

In their study, Waldschmitt et al. showed the proposed function of CHOP down regulation with regards to acute and chronic intestinal inflammatory conditions. At the level of mRNA and protein expression, CHOP down regulation is suggested to contribute to protective mechanisms, which are involved in the maintenance of epithelial cell proliferation upon inflammatory conditions [18]. In our study, CHOP levels were found to increase significantly in the study group when compared with the control group. This result showd that whatever the cause for the inflammatory state in acute pancreatitis is, it is associated with an increase in CHOP.

Elevated WBC and hematocrit values, hyperglycemia, hypocalcemia, hyperbilirubinemia, ALP, AST, and LDH are reliable in showing the etiology and severity of the disease. Levels of amylase and lipase are the most commonly used biochemical indicators in making a diagnosis, as they are elevated during pancreatic inflammation. However, they are not the gold standard since the specificity and sensitivity of high amylase and lipase levels are less than ideal. In our study, the levels of AST, ALT, ALP, LDH, GGT, WBC, MPV, amylase, lipase, direct bilirubin and CRP increased significantly with CHOP in the study group when compared with the control group. The results of the correlation analysis showed that amylase (p=0.004, r:0.36), lipase (p=0.002, r:0.39), and LDH levels (p=0.004, r:0.36) were positively correlated with CHOP.

The two main limitations of our study are that it is a onecentered study and it has only a small number of cases. We are confident that higher values for sensitivity and specificity could be obtained with a larger number of cases too. We also propose that serial CHOP value measurements can follow the clinical course of acute pancreatitis. Finally, CHOP levels could be used for developing classifications corresponding to the severity of the case.

No conflict of interest.