Immunoreactive ELAV in the nervous system of Bombyx mori

It is believed that ELAV is an exclusive neuronal marker and necessary for differentiation of the nervous system in the developing stages of Drosophila melanogaster. We applied that the immunoreactive distribution of this ELAV protein in the nervous system of Bombyx mori. ELAV immunoreactivity in the brain and ventral ganglia and its amount is increasing as go on developing stage, larva to adult. This means that ELAV protein play a vital role as neurosecretory material.

The Embryonic Lethal Abnormal Visual system (ELAV) is required for correct differentiation and maintenance of the nervous system. ELAV is expressed exclusively in neurons appearing at the onset of neuronal differentiation from Drosophila melanogaster development [1], and is required for both viability and proper nervous system development [2]. The localization of ELAV protein was studied in all developmental stages using antibodies that were generated against a hybrid protein made in Escherichia coli [1]. They demonstrated that the ELAV protein is detected in the developing embryonic nervous system and first detected in the majority of neurons of the central and peripheral nervous systems from developing stages, embryonic to adults [1].

Drosophila melanogaster ELAV, the first identified member of the ELAV family, is specifically expressed in all neurons and has a predominantly nuclear localization [3,4]. The ELAV gene provides a vital function that is important to differentiation and maintenance of neurons [5].

Tissue preparation and whole mount immunocytochemistry were performed according to the methods described [6]. The brains and ganglia of Bombyx mori from developing stage were dissected in 0.1 M sodium phosphate buffer (pH 7.4) and fixed in 4% Paraformaldehyde (PFA) in 0.1 M phosphate buffer for 5-9 hours at 4°C depending on the size of brains. The fixed brains were dehydrated, cleared and rehydrated, using ethanol and xylene, respectively. After rehydration, blockage of peroxidase activity was performed in 10% methanol with 3% H2O2 for 25 min. Washing in 0.1 M Tris-HCl buffer (pH 7.6-8.6) containing Triton X-100 and 4% NaCl were followed by incubation with a primary antiserum anti-ELAV (Sigma) for 4-5 days. After complete washing, brains were incubated in peroxidase-conjugated swine anti-rabbit IgG (Sigma) for 2 days and followed by preincubation of 0.03% Diaminobanzidine (DAB, Sigma) and then peroxidase reactions was followed by treatment with 0.03% DAB in 0.05 M Tris-HCl buffer containing 0.01% H2O2 for 5-10 min. The procedure was stopped when the reaction was appeared and followed by embedding in glycerine.

Brains from each larval stage were isolated in 0.1 M PB and fixed in 4% PFA for 4 hours at 4°C, and washed with 80% ethanol (8x 10 min). Continuous washing with 0.01 M PBS with 1% Triton X-100 was followed and brains were then incubated with anti-ELAB overnight at room temperature. Brains were rinsed in 0.01 M PBS with 1% Triton X-100 and then incubated with swine anti-rabbit IgG conjugated with FITC for 4 hours in the dark room. Brains were finally washed in 0.01 M PBST, mounted with glycerine, examined and photographed with a fluorescence microscope [6]. 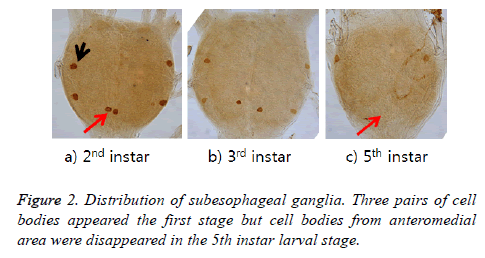 ELAV-immunoreactive cell bodies were shown two pairs in 2nd instar but one pair from 3rd instar was disappeared. One pair are left in the lateral portion and conserved until 5th instar larval stage (Figure 3). Labelled axons projected bilaterally from the anterior and then extended to N1 [7] (refer to Burrows (1996) for definition of the nerves N1 and N2). 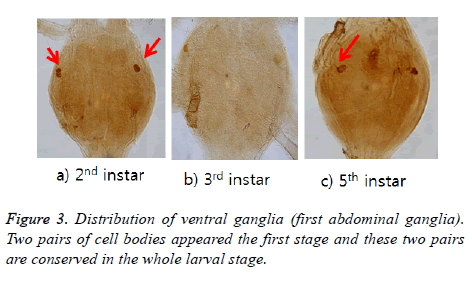 In Drosophila melanogaster, the vital ELAV (Embryonic Lethal Abnormal Visual System) gene is expressed panneurally in all stages of development. The ELAV protein is present exclusively in all immature and mature neurons [1]. The ELAV family genes, however, now identified in a variety of vertebrates and invertebrates, express either exclusively within the nervous system, or both in the nervous system and in other tissues as well [1,8-10]. We did not apply with ELAV gene in molecular level but investigate the ELAV protein distribution in invertebrate, the silk moth, Bombyx mori using an immunocytochemistry method. ELAV immunoreactivity was shown in the brains, which primarily scattered, playing a pivotal role as neurosecretory cells.

ELAV immunoreactivity could be seen in both axons. It suggests that ELAV immunoreactivity produced in the brain neurons are transported via the axons. These immunoreactive cells can be functioned as a neurotransmitter through thoracic and ventral ganglia, targeting to each organ. Particularly, corpora allata contained abundant ELAV immunoreactivity. This suggests that ELAV protein produced in the brain neurons are transported via the axons within the NCC I+II and NCA I to the corpora allata that appears to be release site for the ELAV in some brain cell bodies produced [6]. It has been shown that an insect subesophageal ganglion contains a variety of insect hormones including vasopressin [11] and neurophysin I and II [12] and leucokinin [13]. Vasopressin regulates the body's retention of water by acting to increase water reabsorption and Neurophysin II is a carrier protein, which binds vasopressin. With this detection of various insect peptides, ELAV can be presumptive as a role of neurophysical function.

As the stage goes on, ELAV protein was expressed, which means that the visual function of ELAV is conserving and plays a vital role as a neurosecretory hormone which means ELAV gene provides a neuronal-housekeeping function that is required for the successful posttranscriptional processing of transcripts from a set of genes the function of which is required for proper neuronal development and maintenance [1,8] because of much expression of ELAV protein through developing stages, larva to adult. In this study, there is no published data about the immunoreactive distribution of ELAV protein from the central nervous system of silk moth. For further study, ELAV immunoreactivity will be necessary to evaluate the ELAV’s function during all developing stages, larva to adult. Therefore, this study will be valuable and can be guideline to investigate and compare ELAV protein studies from other lepidoptera and insects.