In order to determine the fine structural differences and labeling by immunoferritin particles of CD4-positive (CD4+) and CD8 positive (CD8+) cells at the ultrastructural level, short term cultured lymphocytes from eight healthy donors seropositive for HTLV-I were examined and virus production was examined in vitro. Sera of eight donors were all positive on the particle agglutination (PA) test, but only of the four of the eight were positive on the immunofluorescence (IF) test. Sera with high titer on the PA test, e. g., above 26, were likely to be positive on the IF test, as well. Ultrastructurally, CD4 + cells were mostly smaller than CD8 + cells, with higher N/C ratio and a heterochromatin-rich nucleus. CD8+ cells were usually more abundant in cytoplasmic organelles than CD4 + cells. Interestingly, in CD4+ cells, two types of surface immunoferritin labeling were observed, light or slightly heavy segmental in pattern, though CD8 + cells were always labeled in dense, heavy segmental fashion, when antibodies were applied to short term cultured fresh lymphocytes. In three of eight cases, only a small number of virus particles were detected in the specimens. These findings demonstrated that labeling of CD4+ and CD8+ cells with each CD4 or CD8 antigen differed, as did the ultrastructural findings for these cells. Further investigation of these differences is needed using other types of markers, such as those for chemokine receptors, and other methods to clearly determine the differences between the two types of lymphocytes in fine structure and how these relate to their functions.

It has been clearly documented that adult T-cell leukemia (ATL) cells and lymphocytes from the peripheral blood of healthy donors seropositive for human T-lymphotropic virus type-I(HTLV-I) have the ability to produce virus particles in vitro with or without supplementation of interleukin-2 or phytohemagglutinin [1,2]. Virus production has also been demonstrated in lymphocytes of peripheral blood seropositive for HTLV-I in monkeys and rabbits [3-5]. In general, most ATL cells in cases of ATL harbor CD4 antigen, while some others harbor CD8 antigen or neither, as determined by flow cytometry or immunohistochemistry. However, finestructural differences between CD4+and CD8+cells at the ultrastructural level have only rarely been reported in detail [6,7], although infection or transformation of CD4+cells with HTLV-I has been demonstrated even at the molecular level [8-12]. It has been demonstrated that healthy carriers of HTLV-1 have more CD4+ or CD25-positive lymphocytes in the peripheral blood than do healthy individuals [13].

In the present study, the differences in pattern of labeling of lymphocytes with CD4 or CD8 antigen by immunoferritin particles and their fine structural characteristics were investigated in eight donors seropositive for HTLV-I at the ultrastructural level, together with virus particle production in vitro.

The cells used were short term cultured lymphocytes obtained from the peripheral blood of eight healthy donors, who were 30~54 year old men. Serum from each of these donors was first examined with the particle agglutination (PA) test, and all were found to be seropositive for HTLV-I, as shown in the Table. Then, the sera were also examined by immunofluorescence test using MT-2 cells [14] to determine antibody titers. 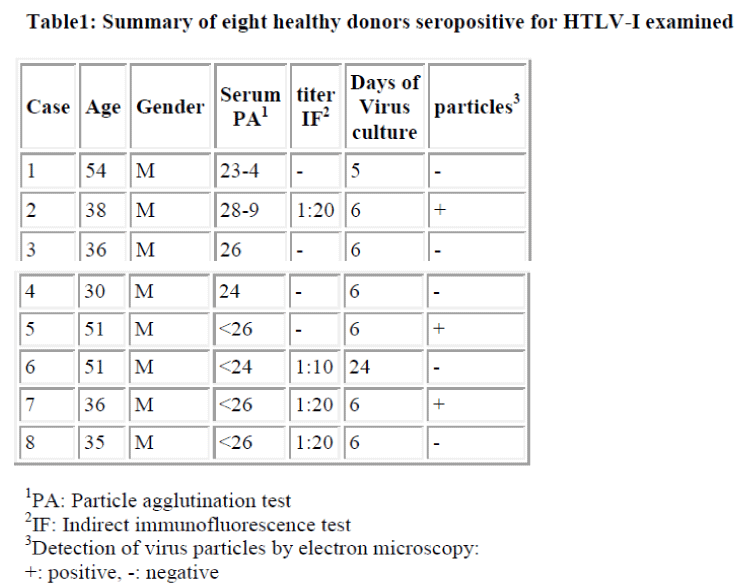 Isolated lymphocytes from the peripheral blood of each donor were cultivated in RPMI1640 supplemented with 10% each of IL-2 and fetal calf serum over 5-24 days in vitro. After cultivation, the cells were divided into two samples, for labeling with anti-CD4 or -CD8 antibody. For the indirect immunoferritin method, as reported previously [15], fresh cultured cells were incubated with antibody to CD4 or CD8 (Orthodiagnostic Inc., USA) diluted at 1:20 at 4 °C for 30 min with continuous agitation. Then, after washing with PBS, the cells were fixed in 2% paraformaldehyde solution containing 0.05% glutaralde-hyde at 4°C for 30 min. The fixed cells were further incubated with the IgG fraction of ferritin conjugated goat antimouse IgG serum (Cappel Lab., USA) at 1:5 dilution at room temperature for 90 min with agitation. After incubation, and washing with PBS, each cell pellet was postfixed in 3% glutaraldehyde solution, and processed for electron microscopy in the usual manner after fixation in 1% OsO4 solution. Ultrathin sections were cut with a Porter-Blum MT-2B ultramicrotome using a diamond knife, stained with uranyl acetate and lead citrate, and examined with a Hitachi H-300 type electron microscope.

Interestingly, using short term cultured lymphocytes from the eight healthy donors seropositive for HTLV-I, two types of labeling were observed in CD4+ cells, light or slightly heavy segmental in pattern (Figs. 1-4, black &white arrows), though CD8+ cells were always labeled in a much heavier segmental pattern (Figs. 6,7, black arrows) than CD4+cells by immunoferritin particles, when each antibody was applied to fresh cultured lymphocytes. At higher magnification, CD4+cells were found to have been labeled in a slightly heavy (Fig. 3, black arrows) segmental pattern or lightly (Fig. 4, white arrows) by ferritin particles. On the other hand, labeling was always very heavy and segmental in pattern in CD8+ cells, with ferritin particles aggregated densely and discontinuously on their surface (Fig. 6,7, black arrows). Labeled cells were sometimes associated with nonlabeled cells as shown in Figs. 1, 6 and 7(asterisks), 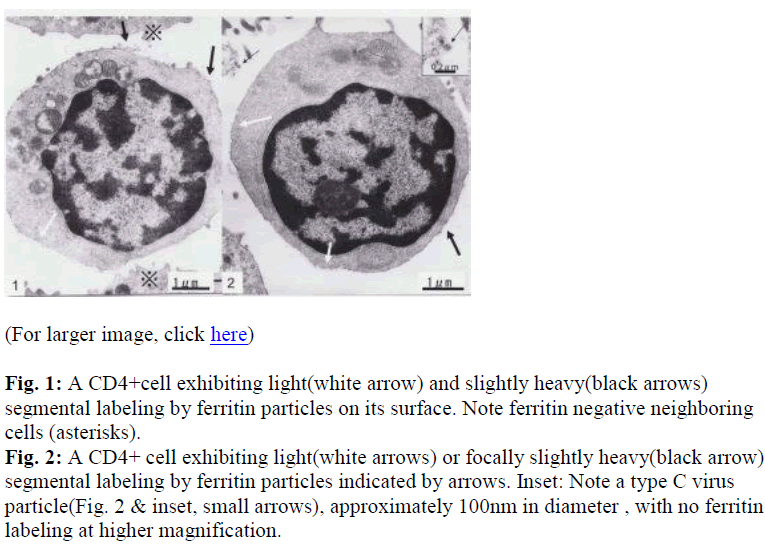 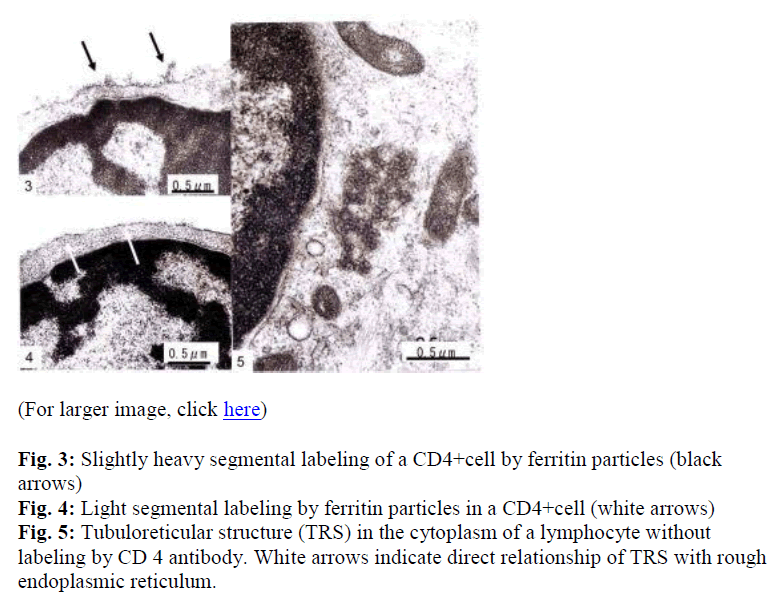 Fine structural differences were observed between CD4+ and CD8+ cells in vitro. CD4+ cells were approximately 6-7μm in diameter (Figs. 1,2), and smaller than CD8+cells, which were mostly around 9-10μm in size (Fig. 6), with higher N/C ratio and heterochromatinrich round smooth nuclei and clear nucleoli (Figs. 1,2). CD8+cells contained euchromatinrich ellipsoid nuclei with clear nucleoli (Fig. 6). In the cytoplasm, scattered mitochondria, fragmented rough surfaced endoplasmic re- ticulum, and many polysomes were generally found.

Large mitochondria more than 1μm in size were occasionally found in CD8+cells (Fig. 6,7, white arrow). On cell surfaces, microvilli were generally found in greater number on CD8+ cells than on CD4+cells. In a CD4-negative cell, tubuloreticular structure was found in the cytoplasm(Fig. 5) with direct relation to the endoplamic reticulum(Fig. 5, white arrows). 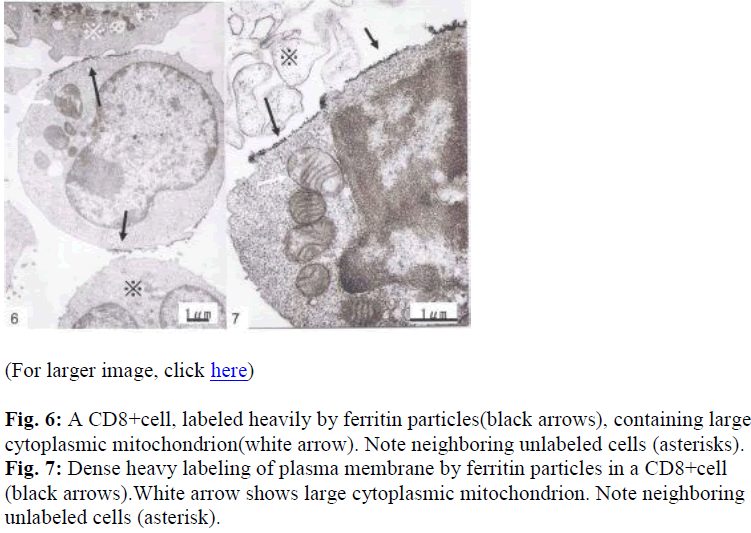 Although virus particles were detected (Fig. 2&inset, small arrows), their numbers were very small and insufficient for clear determination of their source. Both CD4+ and CD8 +cells were associated with virus particles, though no labeling with immunoferritin particles was found on the viral envelope (Fig. 2 inset) in the present study.

These findings demonstrated that the fine structure and labeling by immunoferritin of CD4+ and CD8+ cells differed at the ultrastructural level in sera of all eight donors seropositive for HTLV-I examined. Small numbers of virus particles were found in three of the eight cases.

In this study, donors seropositive for HTLV-1 with high titer on the PA test, e. g., greater than 26, were likely to be positive on the IF test, as well, though no clear relationship was found between titer and detection of virus particles at the ultrastructural level, as also reported previously [2]. In fact, although virus particles were detected in three of eight cases in the present immunoelectronmicroscopic study, when fresh short term cultured cells were examined in routine fashion, virus particles were found in all of six healthy donors seropositive for HTLV-1 in a previous study [1,2]. Although both CD4+ and CD8+ cells were associated with virus particles in the present study, they appeared not to be labeled by immunoferritin particles. The virus producing cells thus could not be clearly determined, though it has been demonstrated that lymphocytes are the source of virus particles in vitro [1,2,14]. In the present study, centrifugation was repeated many times to obtain cell pellets after incubation of cultured lymphocytes with each antibody, and during washing processes. This is the main reason we were unable to find many virus particles.

It is of great interest that CD4+ cells exhibited two types of labeling behavior, while CD8+ cells did not. These differences were distinct in each specimen, and ultrastructurally, each positive cell exhibited a unique and characteristic type of morphology, as described above. Compared to the fine structure of ATL cells reported previously [16], that of the CD4+ cells of healthy carriers seropositive for HTLV-1 in the present study differed. In the former study, it was observed that lymphocytes similar to ATL cells in normal individuals comprised 2-3% of peripheral lymphocytes, and were CD4+, but not CD8+[6]. In the present study, labeled lymphocytes corresponding to ATL cells in morphology were not detected in another study of allo activated CD4+ and CD8+ lymphocytes, it was reported that two types of cells were found, type I and type II7. Type I cells contained a few cytoplasmic organelles, while type II cells harbored well developed synthesis and storage organelles. No such distinct differences were found among CD4+ and CD8+ cells in the present study. The dense, heavy labeling of CD8+ cells observed in this study was also found in S-100-positive CD8+ cells in the peripheral blood of healthy individuals [17]. This common type of labeling of CD8+ cells, heavy segmental, is quite interesting and in sharp contrast to that of CD4+cells. Labeling of CD8+cells was indeed usually much heavier, and neither light nor slightly heavy segmental patterns of labeling were found in CD8+ cells. In accounting for this labeling behavior, bridging formation of receptors should be considered in relation to discontinuous segment formation.

Recently, HTLV-I-specific CD4+ or CD8+cells, which were specifically activated and stimulated by HTLV-I-specific virus components, were also reported [11,18]. CD4+ and CD8+ lymphocytes from normal individuals should also be examined, along with those from healthy donors seropositive for HTLV-I in the present study.

Among CD4+ cells, Th1 and Th2 cells harbor different chemokine receptors, such as CXCR3 in Th1 and CCR4 in Th2, which are related to their functions [19-22]. The balance of CXCR3-positive Th1 and CCR4- positive Th2 cells differed between collagen vascular disease associated interstitial pneumonia and non specific interstitial pneumonia, reflecting their pathogenesis [23,24]. The two types of ferritin labeling in CD4+ cells also need to be investigated in relation to the distribution of chemokine receptors

In the present study, cultured fresh cells were tested for labeling by CD4 or CD8 antibodies, but other methods will also be needed to clearly determine the differences between the two types of lymphocytes in fine structure and how these relate to their functions. 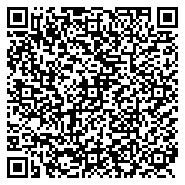