Conclusions: IL-37 could decrease I/R infarction area and improve cardiac function after myocardial ischemia reperfusion injury. The protective effect of IL-37 against I/R injury might be associated with down-regulating the secretion of proinflammatory factors, inhibiting MPO expression and up-regulating the secretion of anti-inflammatory cytokines.

IL-37 is a member of IL-1 family and widely distributed in various tissues. As a natural inhibitor of innate immune, IL-37 is not only involved in the regulation of inflammation factors, but also participates in autoimmune disease and immunoreaction of inflammatory diseases, including ischemiareperfusion disease of alimentary system [4]. A previous study demonstrated that IL-37 inhibited Toll-like Receptor (TLR)-4 expression and nuclear factor kappa B (NF-kB) activation after I/R, while increasing the anti-inflammatory IL-10 level [5]. In addition, it was proved that IL-37 is expressed in the foam cells of coronary atherosclerosis plaque, but there was still lacking of related clinical trials [6]. It was proved that mice could not produce and express IL-37, so we planned to use human recombined IL-37 to replenish IL-37 in mice.

The 8-10 w 80 cleaning laboratory Wistar male mice with a weight of 50-70 g were purchased from experimental animal center of Nanchang University, license number: SCXK (Zhe) 2015-0004. Those mice were kept in separate cages with the temperature ranging from 20-25°C and air relative humidity from 50-60%.

Mice were used for all experiments, and all procedures were approved by the Animal Ethics Committee of Jiangxi Cancer Hospital.

Animal model and grouping method: Animal models were performed based on a previous study [7]. Briefly, after anaesthetization through intraperitoneal injection of 75 mg/kg Ketamine and 7.5 mg/kg diazepam, the oral endotracheal intubation was provided for assisted respiration of mouse on the plat, then opened the chest along with the midline for uncovering the heart, the left anterior descending branch of experimental group was ligated by 6-0 mersilk within 30 min, those successfully modelled 20 mice were allocated randomly: IL-37 treatment (experimental group), saline control (control group), 10 mice in each group, the chest of other 10 sham mice were only opened and uncovered, but not ligation. 1 μg human recombinant IL-37 (dissolution in 200 μL 0.9%NaCl) was tail vein injected into the experimental group when reperfusion, instead, the control were tail vein injected with 200 μL 0.9% NaCl. Mice in each group were sacrificed after 24 h.

After euthanasia, the myocardium was cleared with 0.9% Nacl, and part of ischemic myocardium was made into 10% myocardial homogenate, in which the MPO neutrophil recruitment (MPO) activity was detected by MPO kit according to manufacturer’s instructions. 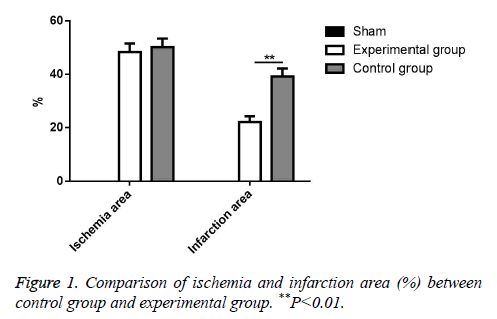 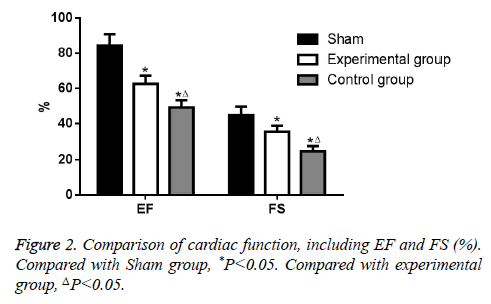 This work was supported by Jiangxi science and technology plan project (No. 20151BBG70138).