Globally, ovarian cancer is a major gynecological problem and one of the leading causes of cancer death in women. It is the seventh most common cancer diagnosed among women in the world. There were estimated 238719 new cases of ovarian cancer worldwide in 2012, accounting for 3.6 % of all cancers diagnosed in women [1].

Ovarian cancer cases were highest in the European region, followed by Southeast Asia [2]. According to latest Malaysian National Cancer Registry report, ovarian cancer is fourth commonest female cancer, accounting 6.1% of 56,713 new cases of women in 2007-2011 [3]. Sivanesaratnam [4] described as the survival rate is only 41.6% and the elusive nature of the disease results in 70% of the cases being in an advanced stage at presentation. There are also issues of chemoresistance, recurrence even with second line chemotherapy, shorter disease free survival and no adequate screening method for early detection. It affects the quality of life of the patients. In view of these reasons, we aimed to test ovarian cancer celllines in order to assess the pharmacological ability of selected medicinal plants to prevent or treat ovarian cancer.

Cordell [5] has highlighted the immense potential of natural products in drug discovery and why it is important to be involved in global sustainable initiatives to improve health care. Plants from the tropical rain forest are biologically and chemically diverse as they synthesize various chemicals as a defense against pests, diseases and predators. They are an excellent reservoir of medicines and chemical leads with which we can design and synthesize new drugs. Curcuma is one such popular medicinal plant. C. zedoaria is a rare species which is available in some parts of Asia and the world [6].

Curcuma zedoaria is one of the native plants of Myanmar [7]. The farms for Curcuma are located in a particular area of central Myanmar. Cultivation starts around October and the land yield good rhizomes. These rhizomes are usually collected in January to February every year. The rhizomes of C. zedoaria are yellowish white, smell of camphor, and are known as “Nanwin Myo”. The rhizomes of C. zedoariaare different in appearance, colour and smell from those of C. longa/ domestica.

Few reports were found on their chemical components and biological activities. Lobo et al. [8] compiled 27 biologically active compounds isolated by various researchers. There are some reports on their biological activities, such as antimicrobial, antifungal, anti-amoebic, larvicidal, analgesic, anti-allergic, cytotoxic and anticancer activities. Among these pharmacological activities, cytotoxic and anticancer activities are more interesting for cancer prevention and new anticancer drug discovery. Determination of cytotoxicity is required for pre-clinical screening of potential drugs, including plant extracts [9]. The cytototoxic and anti-tumour properties of extracts and some compounds of C. zedoaria have been demonstrated on various cancer cell lines and animal models [10-16]. Seo and co-workers [17] revealed that the water extract of C. zedoaria may play an important role in the inhibition of cancer metastasis.

To date, there is a very limited number of studies in the literature on the activity of C. zedoaria on ovarian cancer cells since the earliest work done by Syu et al. in 1998 [10]. Traditionally, the use of C. zedoariain pregnant women is prohibited because of the risk of abortion, as described in the Chinese Pharmacopoeia [18]. Since medicinal herbs and their phytochemicals are potential novel leads for developing antiangiogenic drugs [19], we postulated that C. zedoaria would have anti-angiogenic properties. HUVEC cell lines were used to describe the mechanism of action of a chemotherapeutic agent related to the anti-angiogenic properties as a classic model for anti-angiogenesis [20]. Therefore, we tested CaOv3 (epithelial ovarian cancer cells), SKOV3 cells (metastatic ovarian cancer cells) and HUVEC (human umbilical vein endothelial cells) in our study to investigate the cytotoxicity of various extracts of C. zedoaria against these three cell lines.

The extracts from rhizomes were prepared as described by Arya [21] at Shimadzu-UMMC Centre for Xenobiotics Study (SUCXes) laboratory, Pharmacology Department, Faculty of Medicine, University of Malaya. Briefly, 500 g of rhizomes were coarsely powdered and placed in a cellulose thimble to extract with 100% n-hexane using hot extraction technique with a Soxhlet extractor for 24 h. Further extraction of the obtained defatted residue was carried out using 100% chloroform, followed by 100% (absolute) methanol and lastly with 100% pure water. The solvents from each crude extract were dried by rotary evaporator under reduced pressure at a maximum temperature of 40ºC. Further to the extraction, all the crude extracts were properly stored in a freezer at -20º C until further use.

The tests were performed in the CENAR (Centre for Natural Product Research and Drug Discovery), Department of Pharmacology and Department of Pharmacy, Faculty of Medicine, University Malaya. CaOV3 cells (adenocarcinoma ovary, epithelial ovarian cancer cell line), SKOV3 cells (metastatic ovarian cancer cell-line, which were derived from ascities of chemo-resistant adenocarcinoma ovary), and HUVEC cells (human umbilical vein endothelial cell-line) were obtained from American Type Culture Collection (ATCC). The frozen cells in cryo vials were thawed and subcultured in a sterile manner as per protocol described by ATCC. Initially, McCoy medium was used for CaOv3 cells and SKOV3 cell culture. Later, these cells were gradually familiarized with RPMI 1640. Endothelial Growth Medium (EMG) was used to maintain HUVEC cells. The cells were kept at 37°C with 5% CO2 incubator. The cells in culture flasks were observed under the microscope for growth, and were used to seed when 70-80% confluency was achieved.

In order to measure the cell viability and cell growth in a continuous manner at multiple time points, we performed Cytotoxicity and Real-Time Cell Growth Assay using xCELLigence Real-Time Cell Analysis (RTCA) system, as described by Looi et al. [22]. In brief, SKOV3 cells in exponential growth phase were seeded in E-96 plates with electrodes after taking background measurement of 50 μl of culture medium. The optimal cell numbers in each well were determined before the actual experiment. After seeding the cells at a density of 3 × 103, the plate was placed back in the RTCA system and kept with 5% CO2 at 37°C for 24 h to grow to the log phase. Then, the cells were treated with different concentrations of various extracts of C. zedoaria (200, 100, 50, 25, 12.5, 6.25 μg/ml) dissolved in medium. Paclitaxel (taxol) 1 mmol/ml (0.85 μg/ml) was used as a positive control. The cells were monitored continuously for 72 h.

Similar procedures were performed to culture and treat the CaOV3 and HUVEC cells. 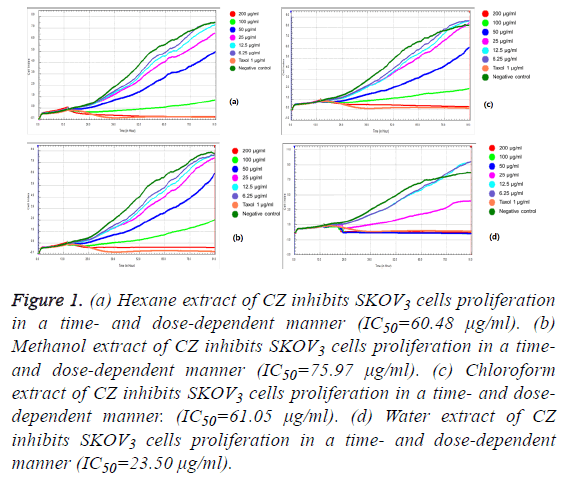 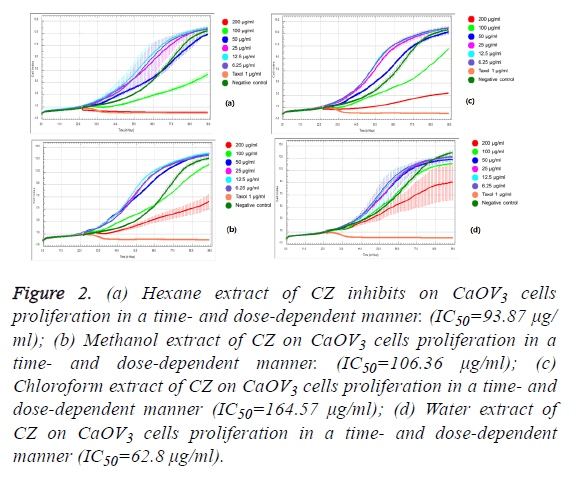 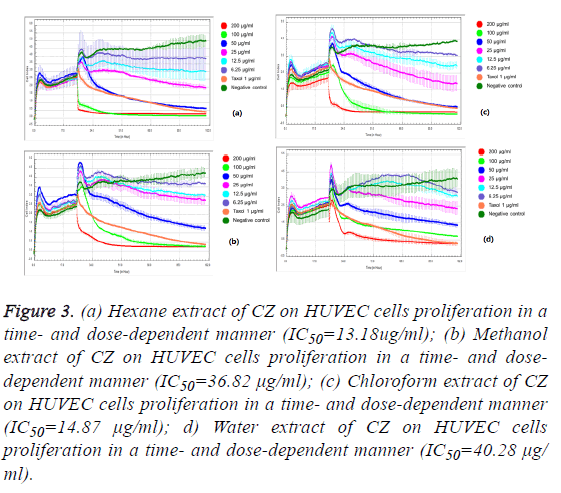 Identification of chemical components from C.zedoaria

Ovarian cancer is known to be a most lethal gynaecological cancer even with optimal therapy. Therefore, the discovery of newer and more effective chemotherapeutic agents is inevitably required to improve the clinical outcome, survival and quality of life. In this innovative research, we were able to evaluate the anti-proliferative effect of four different extracts from C. zedoaria from Myanmar. We found that these extracts contained potential active compounds according to polarity and there were more compounds detected in hexane extract of C.zedoaria rhizomes.

Previously, some compounds were isolated from CZ from various countries such as China, Japan, Korea, India, Bangladesh, Thailand, Indonesia and Brazil [10,23-31]. Because of the typical smell of CZ rhizomes, we postulated that CZ might contain more chemical constituents in hexane extract. Hexane extract contains essential oil with volatile nonpolar compounds which give rise to the aroma of a particular plant or its rhizomes. We found a majority of these compounds in hexane extract.

There are various spectrophotometric or fluorometric assays for determination of cytotoxic activities as described by Cordier and Steenkamp [9]. We chose RTCA as this technology enables us to measure cytotoxic effect of CZ extracts in real-time. In addition, the results can be monitored up to 72 h with a simultaneous comparison with a standard chemotherapeutic drug [34]. Our findings are similar with cytotoxic activity of CZ obtained from Indonesia [14]. However, cytotoxic activities were shown against cervical, breast, colorectal and lung cancer cell lines in their study.

We proved that our extracts, particularly hexane extract, had bioactivity on SKOV3 cells and HUVEC cells, rather than the CAOV3 cell line. Even though water extract from CZ was found to be highly toxic to SKOV3 cells and HUVEC cells, the compounds in water extract may contain some fatty material in micelle forms which may contribute to the toxicity. Therefore, we focused on hexane extract to identify compounds by using GCMS.

We extend our appreciation to University of Malaya for financial assistance through UMRG grant RG-360/11HTM and UMRG-Frontier Science Grant RP021D-14AFR. Our special thanks go to Didi Erwandi from SUCXes laboratory, Pharmacology Department, FOM, UM for his kind technical assistance.