Hypopituitarism association with blindness in a 5 year old boy: A case report and literature review

Many diseases are classified based on their clinical manifestations. This case report describes a patient with hypopituitarism and congenital blindness. Further assessment confirmed a diagnosis of septo-optic dysplasia. Optic nerve hypoplasia is a leading cause of congenital blindness. The triad of i) pituitary insufficiency, ii) optic nerve hypoplasia, and iii) brain midline defects defines septo-optic dysplasia. Three classifications of the disorder are recognized and are discussed here.

Hypopituitarism is defined as a decline in pituitary gland function [1]. The decreased action of the pituitary gland was formerly known as Simmonds’ disease [1]. It is a disorder of endocrine origin with multiple causes [2], which can be congenital or acquired [1]. Childhood blindness is a dominant concern and has reached 1.26 million children [3,4]. In children, blindness can be prevented in 30-72% of cases [4]. Intrauterine infection, teratogens, poor nutrition, neoplasm, and premature birth contribute to early-age blindness [5]. Optic nerve hypoplasia has been known to largely contribute to childhood blindness [6]. In 1965, the association between optic nerve hypoplasia and the absence of the septum pellucidum was identified, and came to be known as septo-optic dysplasia (SOD) [7]. Later, the association between the clinical pictures of pituitary dysfunction was added to SOD [6]. SOD is heterogeneous, with an incidence of 1 in 10,000 live births, with equal prevalence in male and female infants [7]. Gene mutation in HESX1, SOX2, and SOX3 is thought to play a role in familial cases of SOD [7]. Incomplete development of the optic nerve, loss of pituitary gland function, and brain midline abnormalities form the picture of typical SOD [7].

In this case report, we present a case of hypopituitarism associated with blindness since birth.

A 5 year old male with known congenital blindness, presented to the endocrine clinic with short stature. Perinatal history revealed a 38 week gestation, birthweight of 3 kg, elective cesarean section, no history suggestive of birth asphyxia, and born to a 32 year old mother with no complications during pregnancy. No history of infections, maternal nutritional deficiency or teratogenic drug administration was noted. There was no history of neonatal hypoglycemia or micropenis was found. Similar history of congenital blindness was noted in the elder sister (Figure 1). In regard to his short stature, there were no other associated symptoms observed. There was no history of trauma, headache, convulsions, delayed cognitive development, polyuria, cold intolerance, weight gain, facial puffiness or muscle aches. The patient had normal intellectual ability and good academic performance. History of short stature in the father was reported. The father’s height was 162 cm and the mother’s height was 160 cm, with mid-parental height potential of 167.5 cm. There was no relevant medication history. 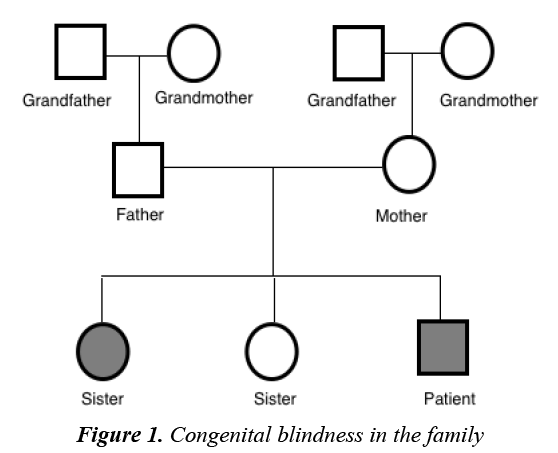 Figure 1: Congenital blindness in the family

On examination, the child was cooperative with normal vital signs and had no signs of developmental delay. His height was 95 cm, below 5th percentile, and his weight was 13 kg, below 5th percentile. Other than the ophthalmological findings, physical examination was normal. Ophthalmological examination revealed an absent red reflex in both eyes, with visual acuity of no light perception, indicating blindness. Slit lamp examination revealed corneal scarring with lens opacity and no retinal view in the right eye. The left eye showed conjunctivalization of the cornea. Bilateral microphthalmia with nystagmus and pallor of the optic discs was noted.

A clonidine and glucagon growth hormone stimulation test (Table 1) confirmed the diagnosis of growth hormone deficiency, with a maximum peak level with stimulation of 2.39 ng/ml; a normal growth hormone peak level should be greater than 10 ng/mL. Other tests (Table 2) revealed central hypothyroidism with no other pituitary dysfunction. Other laboratory investigations were normal, with no electrolyte disturbance. A hand radiograph is shown in Figure 2. Magnetic Resonance Imaging (MRI) (Figures 3-5) revealed that the patient had abnormal pituitary size, smaller right eye globe compared to the left and bilateral optic nerve hypoplasia. 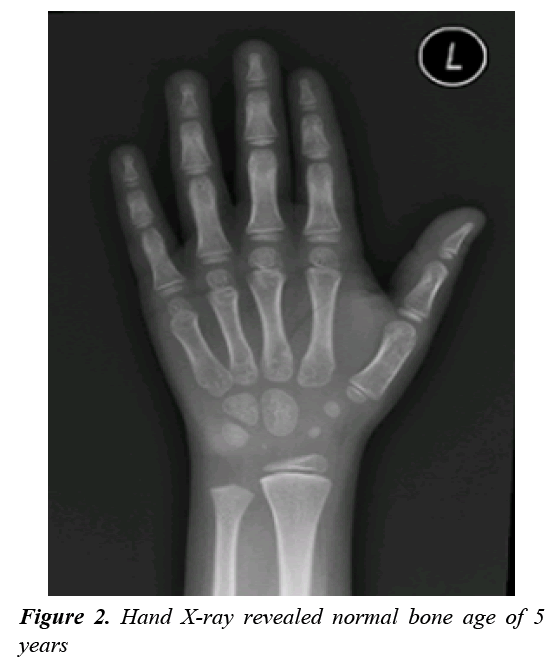 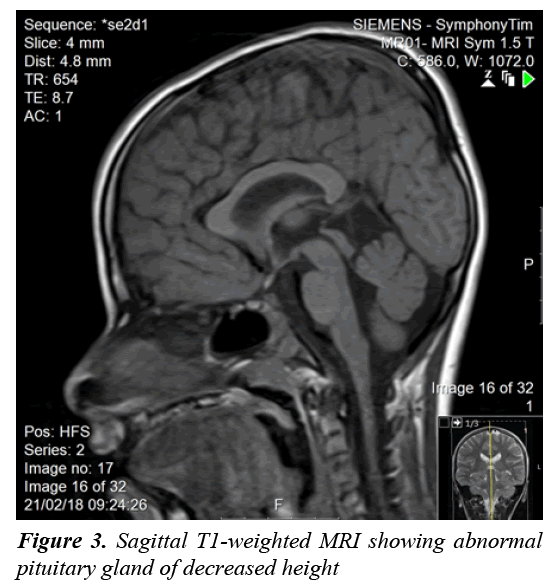 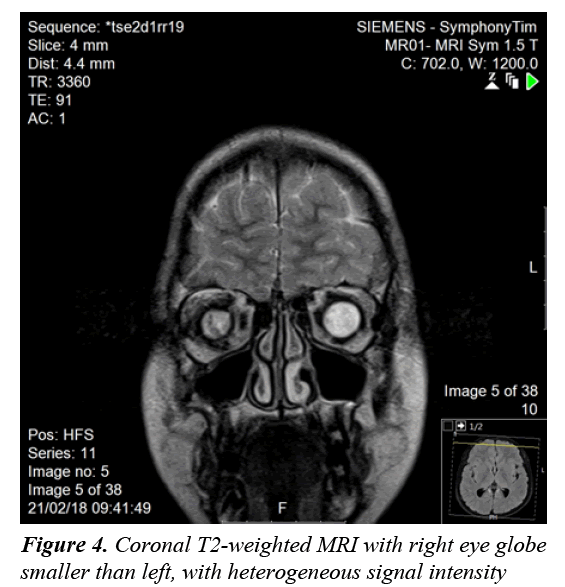 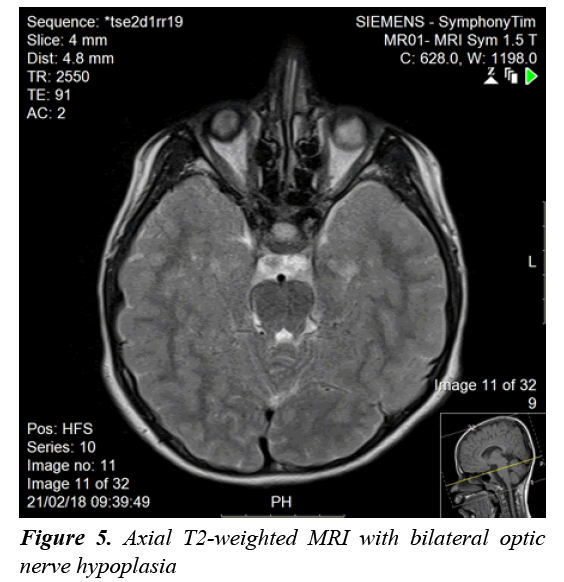 There have been many developments regarding the interpretation of hypopituitarism [1]. Hypopituitarism becomes evident when the network between the hypothalamus and the pituitary gland is blunted because of diminished vessels of the gland [1]. Diagnosis is confirmed by measuring anterior pituitary hormone levels in early morning blood samples after an overnight fast [2]. In our case, the patient’s results showed growth hormone deficiency and central hypothyroidism. Hypopituitarism was diagnosed based on the deficiencies of two anterior pituitary hormones, in addition to decreased height of the pituitary gland confirmed with MRI of the brain. The loss of pituitary gland function can result from congenital or acquired causes [1]. Idiopathic etiology, lesions affecting the sella and central nervous system malformations are considered congenital causes of hypopituitarism [1]. Acquired causes include pituitary tumors, craniopharyngioma, traumatic brain injury and meningitis [2]. Generally, an isolated pituitary deficiency indicates that only one pituitary hormone level is diminished [1]. Multiple pituitary hormone deficiencies indicate decline in the levels or two or more hormones [1]. The condition in which the pituitary gland fails to produce all its hormones is called panhypopituitarism, which accounts 92% of the overall incidence [1,3]. As hypopituitarism is linked to cardiovascular manifestations that increase the mortality rate in children, early initiation of treatment is vital [2,3]. Treatment is the administration of the deficient hormones [2,3]. In our case, thyroxine and growth hormone replacement were initiated on the basis of the findings. The other manifestation seen in our patient was congenital blindness. The development of optic vision and a binocular system is established by the age of one year [8]. Loss of vision in children is frequently due to a cortical visual defect, hypoplasia of the optic nerve, and retinopathy of prematurity [9]. Optic nerve hypoplasia was suspected to be the cause of blindness in our patient, as a manifestation of SOD. The disorder was initially thought to represent an association between optic nerve hypoplasia and absence of the septum pellucidum [10]. Further analysis resulted in pituitary dysfunction being considered a manifestation of SOD [10]. A clinical triad forms SOD and at least two features should be present for diagnosis [7,10]. The triad consists of a pituitary defect, optic nerve hypoplasia, and brain midline defects with the absence of the septum pellucidum [7,10]. There are three clinical classifications of SOD according to a study that explored the clinical spectrum of the disorder: classic SOD, SOD-like and SOD-plus [11-13]. The presence of the three manifestations defines the classic type [13]. SOD-like presentation includes endocrine insufficiency as well as optic nerve hypoplasia, but an intact septum pellucidum [13]. The clinical picture of SOD-plus includes all three manifestations of the typical disease, accompanied by abnormalities in cortical development [13]. Eye examination, pituitary hormone evaluation and MRI should be performed to establish the diagnosis [7]. The disorder has phenotypic variations and is usually diagnosed clinically [11]. Brain MRI usually reveals unilateral or bilateral optic nerve hypoplasia, optic chiasm hypoplasia, septum pellucidum absence, and an irregular pituitary gland [11]. MRI in our patient showed no midline brain anomalies, with intact septum pellucidum and corpus callosum. Bilateral optic nerve hypoplasia was confirmed with imaging. This result corresponded to two features (endocrine insufficiency and optic nerve hypoplasia) of the SOD triad; our case was consistent with the SOD-like classification. SODlike and classic SOD patients are more likely to have significant vision loss [13]. Our patient had blindness, confirmed on ophthalmological examination. Optic nerve hypoplasia in children can be bilateral, found in 80% of all cases or unilateral [12]. Hypoplasia of the optic nerve was formerly reported as defective vision [12]. Children with unilateral optic nerve hypoplasia have greater risk for developmental delay; on the other hand, patients with bilateral optic nerve hypoplasia have decreased risk of developmental delay [12]. This explains the apparent normal development in our patient. Parental consanguinity seems to play some role in developing SOD [11]; however, our patient had no history of parental consanguinity. Since SOD is sporadic, rate of recurrence is <1% if family history is negative [11]. Our patient had an older sister with congenital blindness suspected to result from SOD. Growth hormone is thought to be the most prominent concern with regard to the endocrine manifestations of the disease [11]. Our patient presented with short stature, confirming suppressed stimulation of growth hormone. Other manifestations of the disease are seizures, cerebral palsy, developmental delay, anosmia, cardiac and esophageal anomalies, and sleep disturbance [11], none of which were observed in our patient. The management of SOD patients requires a multidisciplinary approach to ensure normal growth and development [7]. It is essential to know the presentations of each classification and to confirm the diagnosis based on patient symptoms, to be able to provide appropriate care. Annual ophthalmological examination and correction of refractive errors should be performed [6]. Endocrinology referral and maintenance of normal hormone levels are important in children [6]. Other presentations of SOD, such as developmental delay, neurological abnormalities, and sleep disturbance should be addressed and managed adequately. Regarding our patient, the features of the disorder were illustrated and explained to his parents. Growth hormone and thyroxine were prescribed, and an ophthalmology referral was provided.

Although SOD is a rare disorder, physicians should be aware of the manifestations in children for early detection and management. The presenting features of the disorder play an important role in development. Endocrine abnormalities, optic nerve hypoplasia and brain midline defects are the cornerstone features of SOD. Although our patient showed two manifestations of the disorder, further investigation and research enabled us to classify the type of SOD and begin management. The disorder has different presentations; however, it is essential to investigate children suspected of having SOD. The goal is to ensure a normal life for these patients, after the diagnosis is confirmed.