We report hyperacute resorption of the femoral head within six weeks after triple corticosteroid injections. A 65-year-old male patient had bilateral idiopathic osteonecrosis proven by magnetic resonance imaging, and the unilateral pain was controlled with three separate corticosteroid injections. The clinical progression deteriorated, so the patient was transferred to our hospital six weeks later. The imaging studies and blood tests showed a destructive femoral head as well as bone marrow changes in the ipsilateral distal femur. The patient reported severe pain in the hip joint, and a cementless total hip arthroplasty was conducted. The postoperative histopathological findings revealed osteonecrosis of the femoral head and the distal femur. The authors found the rapid destruction of the femoral head by corticosteroid injections in osteonecrosis. We report these very rare findings along with literature reviews.

Rapid destructive coxarthrosis can be defined according to its clinical, anatomical, and pathological criteria [1]. The etiology is not well known. Several case reports have been published since the first report by Forestier in 1957 [2]. Degenerative changes generally begin in a mostly healthy joint and progress to rapid destruction within 6–12 months [1]. Lequesne et al. [3] defined rapid destructive coxarthrosis as a greater than 2-mm/ year rate of joint space narrowing or more than 50% of joint space loss within one year. Underlying diseases include rheumatoid arthritis [4]; ischemic necrosis is also a potential cause. Steroid injections have been identified as a triggering factor [3,5]. The authors observed hyperacute destruction of the femoral head after three separate corticosteroid injections within six weeks in a man with bilateral idiopathic osteonecrosis. We suggest a strong correlation between the steroid injections and the rapid destruction of the femoral head.

A 65-year-old male patient was checked using magnetic resonance imaging (MRI) at a private clinic for spontaneous pain in the left hip six weeks before being referred to our hospital. He had received treatment for early gastric cancer via a subtotal gastrectomy three years prior, and there was no history of corticosteroid intake or alcohol abuse. The change of bone marrow signal intensity was irregular in the first MRI (Figure 1), and the first intralesional injection was carried out in the left hip joint (Figure 2).

Figure 1: (A) T2-weighted coronal view obtained via magnetic resonance imaging at a local clinic shows irregular bone marrow signal intensity changes in both femoral heads and joint effusion on the left side. (B) A high signal intensity also is present in the left acetabulum in the axial view. 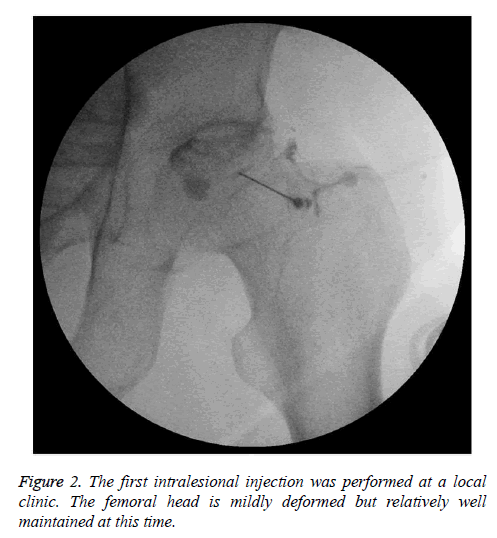 Figure 2: The first intralesional injection was performed at a local clinic. The femoral head is mildly deformed but relatively well maintained at this time.

A limping gait and the left hip pain gradually worsened, and a steroid injection was administered once again 11 days later. However, the pain was still agonizing, so the third injection was done 7 days after the second one (Figure 3). The corticosteroid was a long-acting synthetic corticosteroid (Triamcinolone 20 cc) mixed with an anesthetic (Mepivacaine 2 cc). The pain was not controlled, and the patient was transferred to our hospital because the severe change in the femoral head was suspicious for acute infection or a metastatic lesion according to the local doctor, who was unfamiliar with rapid destructive coxarthropathy. 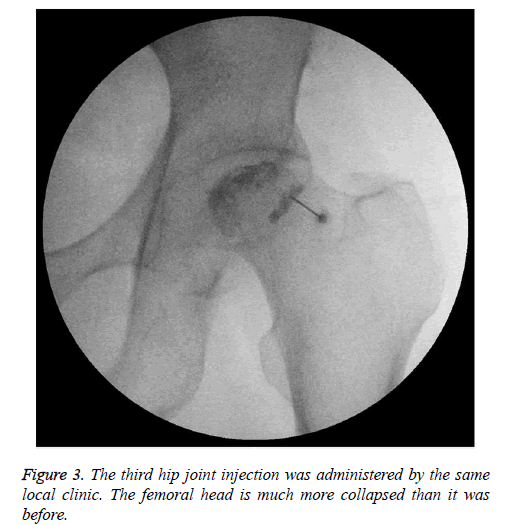 Figure 3: The third hip joint injection was administered by the same local clinic. The femoral head is much more collapsed than it was before.

At our hospital, the patient’s body temperature was within the normal range. The passive range of motion of the left hip joint was also normal, and a Patrick test was positive. The Harris hip score was 43 points. A hematologic examination was conducted for the differential diagnosis of infection, rheumatologic disease, or metastasis in the hip joint. All the results were normal (ASO titer: 55.6 IU/ml, C-reactive protein: 7.7 mg/l, rheumatoid arthritis factor: <15 IU/ml) except for a slightly increased level of white blood cells (WBC: 10,010/μl). The tumor marker test did not show any abnormal findings.

The patient was hospitalized, and a hip joint x-ray revealed destruction of the left femoral head, suggesting rapid destructive coxarthrosis (Figure 4). On hip joint MRI at our hospital, the change in the bone marrow signal intensity was irregular in the left femoral head, and a loss of articular cartilage and osteonecrosis were also observed (Figure 5). A whole-body bone scan of the patient showed dense hot uptakes only in the left hip joint and the distal femur (Figure 6). A knee joint x-ray was obtained to evaluate the hot uptake of the asymptomatic knee joint but revealed normal findings (Figure 7). Knee MRI showed an irregular and massive bone marrow signal intensity change that was consistent with massive bone infarct with bone marrow edema (Figure 8). 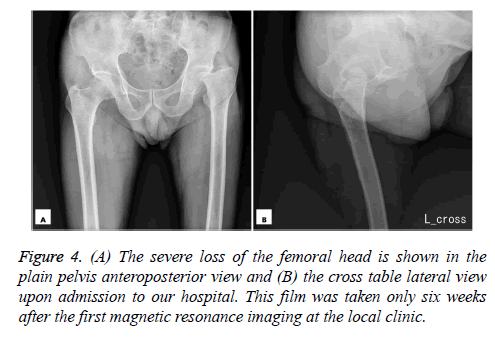 Figure 4: (A) The severe loss of the femoral head is shown in the plain pelvis anteroposterior view and (B) the cross table lateral view upon admission to our hospital. This film was taken only six weeks after the first magnetic resonance imaging at the local clinic. 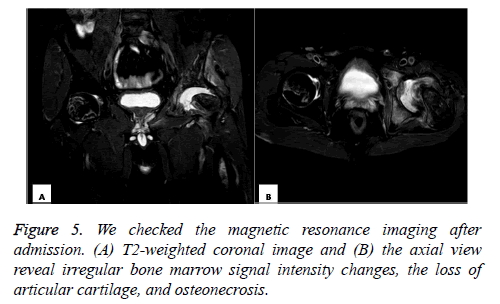 Figure 5: We checked the magnetic resonance imaging after admission. (A) T2-weighted coronal image and (B) the axial view reveal irregular bone marrow signal intensity changes, the loss of articular cartilage, and osteonecrosis. 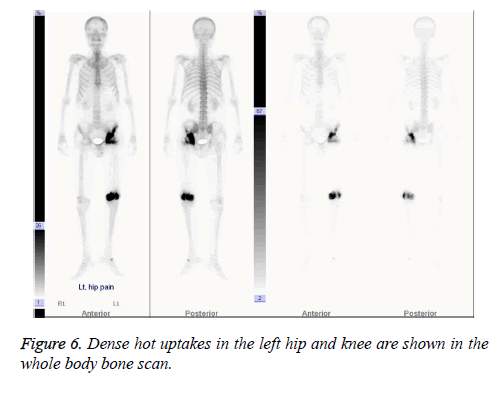 Figure 6: Dense hot uptakes in the left hip and knee are shown in the whole body bone scan. 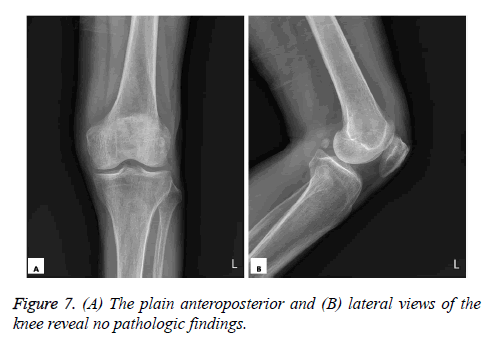 Figure 7: (A) The plain anteroposterior and (B) lateral views of the knee reveal no pathologic findings. 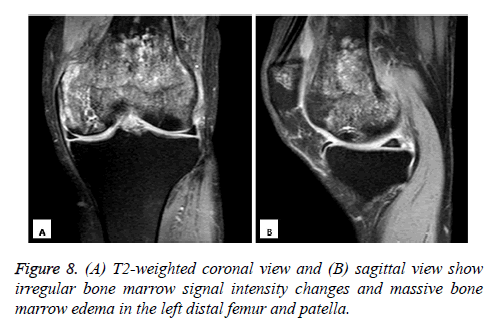 For a precise diagnosis, hip joint aspiration and bone biopsy of the proximal and distal femur was carried out under general anesthesia. The cytologic examination showed blood and necrotic materials (no cellular components), and the culture was negative. No evidence of malignancy or inflammation was found in the bone biopsy. The results of immunohistochemical staining for cytokeratin were negative. A cementless total hip arthroplasty was conducted on the left hip joint due to the patient’s severe symptom (Figure 9). The femoral head was significantly resorpted during the intraoperative evaluation (Figure 10). The postoperative histopathological findings revealed necrotic amorphous debris, fibrosis, blood clots in the marrow space, and fragmented bony trabeculae of both the hip and knee joint. These observations corresponded with osteonecrosis. After surgery, the patient was given a programmed rehabilitation schedule. We followed him up for 45 months in the outpatient department base, and the final Harris hip score was 92. 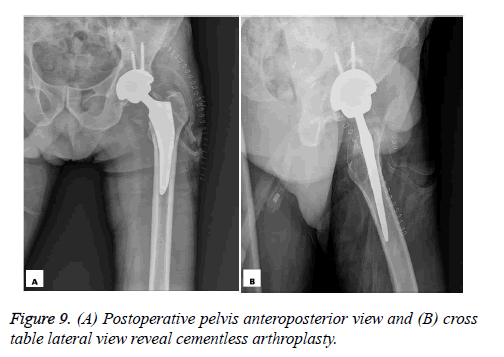 Figure 10: (A, B) Intraoperative findings show severe destruction of the femoral head.

Forestier described the first rapidly destructive arthrosis of the hip in 1957, and it was subsequently labeled atrophic osteoarthritis, rapidly progressive osteoarthritis, destructive osteoarthritis, and Postel’s osteoarthritis [2]. The causes of rapid joint destruction are still poorly defined, but etiologic factors include articular chondrocalcinosis, apatite crystal deposition, neuropathy, infection, drug-induced arthropathy, rheumatoid arthritis, and subchondral insufficiency fracture [5]. Rosenburg et al. argued that osteonecrosis associated with hematologic disorders, steroids, infections, and rheumatologic diseases should be excluded [6]. One of the clinical features that differentiate rapidly destructive arthropathy from other diseases is the progression rate of the arthropathy. Regarding the duration, Bock et al. reported acute destruction of the articular surface within an average of 14 months in 23 cases [7]. Most other studies have observed an occurrence of the destruction within an average of 12 months; severe cases showed destruction within 6 months. Our case was a very rare and hyperacute resorption where joint destruction was accelerated in just six weeks due to the underlying disease of osteonecrosis and following three sessions of prior steroid injections.

The etiology of acute bone destruction is related with osteonecrosis of the entire femoral head. Ischemic hip disease is a potential causative factor of rapidly destructive hip osteoarthritis [3,8,9]. Moreover, it occurs more often in patients with rheumatoid arthritis. High-risk groups amongst those with rheumatoid arthritis include postmenopausal women, drug resistant patients with highly active disease, and those taking steroids [4]. Yun et al. [10] reported rapidly destructive arthropathy of the hip joint in three elderly rheumatoid arthritis patients. Their patients also similarly met the aforementioned criteria: they had disorders in more than four major joints; steroid and disease-modifying antirheumatic drugs were administered for a prolonged period; and the patients’ body mass index was below 20 kg/m Yun et al. [10]. Yamamoto et al. [5] identified acute destruction of the femoral head after steroid injection in a healthy femoral head and suggested a cause-and-effect relationship between the steroid injection and acute destruction of the femoral head [5]. Caroline et al. reported no effect of intraarticular glucocorticoid injection for the treatment of rapid destructive hip osteoarthritis [5]. Caroline et al. [3] also found that the prior injection of a glucocorticoid did not decrease the need for total joint arthroplasty. Kawai et al. [1] reported satisfactory treatment results with the use of a Kerboull-type acetabular reinforcement device. Rapid destruction of the femoral head is usually common in patients with existing rheumatologic disease, female patients who take steroids, and those with secondary osteonecrosis, especially in steroid-induced cases.

No benefits in any form have been or will be received from a commercial party related directly or indirectly to the subject of this article.