How many mcr-1-harbouring bacteria were spreading geographically?

Colistin is widely used as an antibiotic of last resort for treating infections caused by multidrug-resistant gram-negative bacteria such as carbapenemase-producing Enterobacteriaceae. Recently, the emergence of plasmid-mediated (horizontally-transferable) colistin resistance (mcr-1) has become a great challenge to global public health. The mcr-1 gene was detected in ESBL (Extended Spectrum β-Lactamase)- producing and/or carbapenemase-producing Enterobacteriaceae. Therefore, there is a huge risk of the emergence of pan-drug-resistant gram-negative bacteria. In this paper we discuss the epidemiological analyses of mcr-1 positive Enterobacteriaceae and structural analyses of PmrC that was recently identified as a protein associated with colistin resistance.

If antibiotic resistant pathogens remain unchecked, it is estimated that by 2050 the global mortality attributed to antibiotic-resistant bacterial infections will soar to 10 million, at a cost of over $100 trillion (http://amr-review.org/). The spread of carbapenemase-producing Enterobacteriaceae is a significant threat to public health. For serious infections caused by carbapenemase-producing Enterobacteriaceae, the treatment options are restricted and invariably rely on tigecycline and colistin [1]. Therefore, the global increase in carbapenemase-producing Enterobacteriaceae has resulted in increased use of colistin with the inevitable risk of emerging resistance. Colistin resistance has involved chromosomal mutations but has never been reported via horizontal gene transfer. However, a plasmid-mediated (horizontally-transferable) colistin resistance (mcr-1) gene was recently reported in China [1] and subsequently detected in Asia (Vietnam, Laos, Thailand, Cambodia, Malaysia, Singapore, Taiwan and Japan), Europe (The Netherlands, Germany, Belgium, Switzerland, France, Denmark, United Kingdom, Spain, Italy, Sweden and Portugal), Africa (Algeria, Egypt, South Africa and Tunisia), and America (Canada, Argentina and Brazil) (Figure 1) [2-47]. We also found two Escherichia coli isolates harbouring mcr-1 gene (GenBank accession no. KU886144 from a human being in Ecuador and GenBank accession no. KU743383 from a pig slurry in Estonia) in the public NCBI database. To investigate how many mcr-1 positive Enterobacteriaceae have been spreading globally, we analysed all these findings that were searched from the following databases PubMed, Medline, Embase, NCBI, and Google Scholar as of 4th May 2016. The analysis results showed the following important aspects: (i) the mcr-1-harboring bacteria had spread to most continents; (ii) four further studies are needed to fight against plasmid-mediated (horizontally-transferable) colistin resistance, particularly in pan-drug-resistant gram-negative bacteria.

As of 4th May 2016, 863 mcr-1 positive Enterobacteriaceae (Escherichia coli, Klebsiella pneumoniae, Salmonella enterica, Enterobacter aerogenes, Enterobacter cloacae, human gut microorganisms and so on) were detected globally and mcr-1- harbouring bacteria have mainly spread in Asia (n=550) and Europe (n=224) (Figure 1) [1-42]. Because in most studies mcr-1 carriers have been identified from random sample collections, the reliable prevalence of mcr-1 positive isolates is not known. In America, only 29 isolates (or 60 in Africa) were detected in animal and/or human being [11,19,21,43-47]. 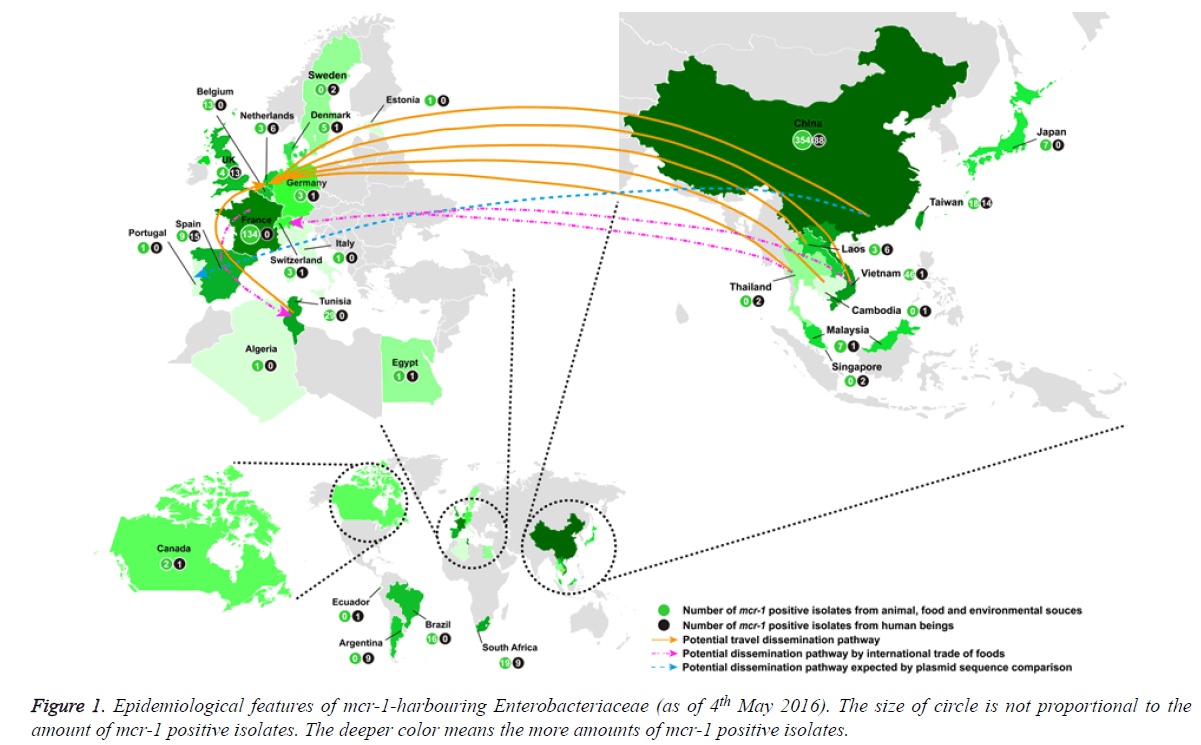 First, mcr-1 positive isolates from human beings were detected after the dissemination of New Delhi Metallo-β-lactamase-1 (NDM-1) positive Enterobacteriaceae that were susceptible to tigecycline and colistin. The limitation of colistin use in treatment of infection via ESBL-producing/mcr-1-harbouring gram-negative bacteria [4,7,10-12,14,19,29,30,35,38] or carbapenemase-producing/mcr-1-harbouring Gram-negative bacteria [9,24,35] may increase tigecycline use and then the possibility of emergence of tigecycline resistance mechanisms other than an efflux pump. To prevent the emergence of a pandrug resistance in gram-negative bacteria, the continued monitoring of colistin and/or tigecycline resistance and their underlining mechanisms in human, animal, food and environmental sources have to be required.

Second, 162 (18.8%) of 863 mcr-1 positive Enterobacteriaceae were investigated about plasmids associated with mcr-1 gene and harboured a low variety of plasmids (IncI2, IncHI1, IncHI2, IncP, IncFI and IncX4) [4,9-13,18,19,23,24,30,32,33,35,38,41]. To clarify the diversity of the plasmid backbones spreading mcr-1 gene within the remaining 701 isolates or isolates detected in the future, additional studies about the plasmids (or the mobile elements) are needed. Like chromosomal localization of the commonly plasmid-borne qnrB (plasmid-mediated quinolone resistance) genes, the chromosomal location of mcr-1 gene associated with a mobile element such as ISApl1 may be observed in the near future. In addition to the plasmid itself, the mobile element alone can represent the transfer mechanism of mcr-1 into Enterobacteriaceae.

Finally, mcr-1 gene was not detected in 803 (48.2%) of 1,666 colistin resistant Enterobacteriaceae [1-44,46,47], suggesting that they might potentially harbour other colistin-resistant mechanism (probably, new groups of MCR) or even novel mcr-1 alleles. The pmrC gene was recently identified as a gene associated with colistin resistance by our group [48]. Homology modelling of MCR-1 and PmrC were performed by an automated homology modelling approach using LptA (PDB ID 4KAY) and EptC (PDB ID 4TN0) as templates in Swiss- Model (http://swissmodel.expasy.org/) program. Although PmrC showed 29% amino acid sequence identity to the MCR-1 sequence, the Root Mean Square Deviation (RMSD) of the Cα trace between PmrC and MCR-1 models was 1.0 Å, supporting that PmrC structure was quite similar to MCR-1 structure as described in the supplementary appendix (Figure S1, available as supplementary material). Structure-based alignment of PmrC, MCR-1, LptA and EptC revealed that key residues identified as to be important to the catalytic activity of LptA and EptC are conserved in PmrC and MCR-1 (Figure S2, available as Supplementary Material). Taken together, the PmrC predicted structure is consistent with a lipid A phosphoethanolamine transferase, which was functionally confirmed by lipid A analysis as previously described [48]. Therefore, the PmrC may probably be another group of MCR. However, further studies are needed to confirm the hypothesis that PmrC may be a new group of MCR in addition to MCR-1 group and continuously monitor another group of MCR.

Figures S1 and S2 are available as Supplementary Materials.

This work was supported by research grants from the National Research Foundation of Korea (NRF) funded by the Ministry of Science, ICT and Future Planning (No. 2011-0027928 and No. 2016R1C1B2010308) and Marine Biotechnology Program (20150581, Development of Technology for Biohydrogen Production using Hyperthermophilic Archaea) Funded by Ministry of Oceans and Fisheries in Republic of Korea.