Hospitalization cost in infants with hypoglycemia.

Neonatal Hypoglycemia (NH) is a common metabolic abnormality in newborns due to inability to maintain glucose homeostasis [1,2]. Throughout gestation, mothers provide all the glucose for their fetuses via facilitated diffusion across the placenta according to a maternal-to-fetal glucose concentration gradient [3]. The disruption of this process can lead to several acute and chronic illnesses. The most common symptoms of NH are shakiness, tachycardia, lethargy, and temperature irregularities [4]. In the presence of these symptoms, NH is defined as capillary plasma glucose of less than 46 mg/dl (2.6 mmol/l) [4,5]. Several clinical conditions could be associated with NH that could affect glucose homeostasis including asphyxia, congenital heart disease, decreased substrate availability as a result of birth defects, prematurity and fetal growth restriction, islet cell hyperplasia, and Beckwith-Wiedemann Syndrome [6-10]. Prolonged NH may also cause neuroglycopenic signs such as seizures, coma, cyanotic episodes, apnea, respiratory distress, and hypothermia [2].

Previous NH studies mainly focused on the clinical risk factors and analyses aimed at improving the management and care of this condition. However, the economic burden and overall hospital cost estimates of NH has not been studied at the national level in the United States (US). The economic burden of hypoglycemia has been adequately addressed in the adult population [11-16]. This study sought to determine the overall hospital cost estimates in neonates with hypoglycemia and compare hospital cost in premature and non-premature newborns. The study also sought to identify predictors of increased hospital cost.

This is a retrospective study based on the 2012 Kids’ Inpatient Database (KID) developed by the Healthcare Cost and Utilization Project (HCUP) of the Agency for Healthcare Research and Quality (AHRQ) [17]. The KID is the largest publicly available all-payer pediatric (≤ 20 years of age) inpatient care database in the United States. The database is a sample of pediatric discharges from all community, non-rehabilitation hospitals in 44 participating States. Systematic random sampling is used to select 10% of uncomplicated in-hospital births and 80% of other pediatric cases from each participating state. The 2012 KID database includes 4179 hospitals with 3,195,782 pediatric discharges. HCUP categorize hospital regions as northeast, midwest, south, and west. Hospital ownership, teaching status, location, bed size, and other important hospital characteristics were also included in the database. In total, 70 children’s hospitals (400,835 pediatric discharges) and 4,109 hospitals that admit all patients (2,794,947 pediatric discharges) were included in the 2012 database. As we are interested only in neonates, this analysis is limited to uncomplicated and complicated in-hospital births.

Neonatal comorbidities associated with hypoglycemia were defined as a dichotomous variable using ICD-9-CM codes (Appendix A). In this respect, the presence of any comorbidities associated with neonatal hypoglycemia such as jitteriness, hypotonia, lethargy, apnea, tachypnea, poor feeding, hypothermia, sepsis, seizures, neurodevelopmental deficits were used to create a dichotomous variable that indicates the morbidity status of newborns. In addition, demographic information (age, sex, and race), region of hospitals (Northeast, Midwest, South, West), hospitals teaching status, bed-size category (small, medium, large), admission date (weekend versus weekdays), length of hospital stay (LOS), number procedures performed during hospitalization (NPR), number of chronic conditions during hospitalization, expected primary payer, and in-hospital mortality was extracted for the purpose of the current analysis. Hospitalization for hypoglycemic neonates was categorized into premature and nonpremature using the Diagnosis Related Groups version 24 (DRG24) codes (386-388). DRG24 is assigned by the Centers for Medicare & Medicaid Services (CMS) DRG Grouper algorithm during HCUP processing and it been available since 2006 [17].

We used the Kolmogorov-Smirnov test (KS-Test) to assess normality for continuous variables. Groups were compared using the Wilcoxon-Mann-Whitney test for continuous variables and the χ2 test for categorical variables. For continuous variables data were presented in median and interquartile range (IQR). Whereas categorical variables were presented as numbers (n) and percentages (%). Odds ratios (OR) for increased hospital cost estimates were determined by using bivariate and multivariate logistic regression. All variables that were significantly associated with increased cost (p<0.05) were included in the multivariable logistic regression analysis. We used this stringent criterion for inclusion in the model was used because of the large sample size.

A p<0.05 was considered statistically significant for all tests. SAS® version 9.3 was used for the analysis (Institute Inc., Cary, NC, USA). In assessing the calibration of our model, we used the Receiver Operating Characteristics (ROC) curve to calculate c statistic and the Deviance– Pearson (D-P) goodness of fit statistics [18,19]. The two model evaluation measures carried out in this study should provide enough assurance regarding the accuracy of our model. 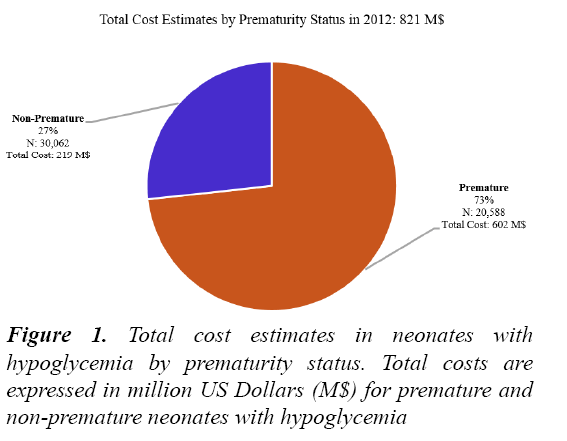 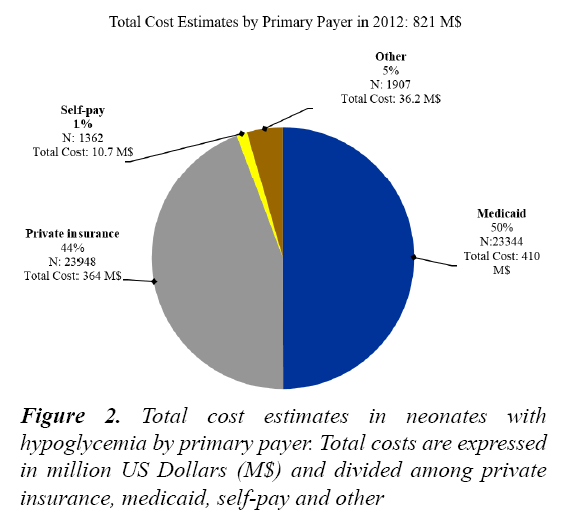 Figure 2: Total cost estimates in neonates with hypoglycemia by primary payer. Total costs are expressed in million US Dollars (M$) and divided among private insurance, medicaid, self-pay and other 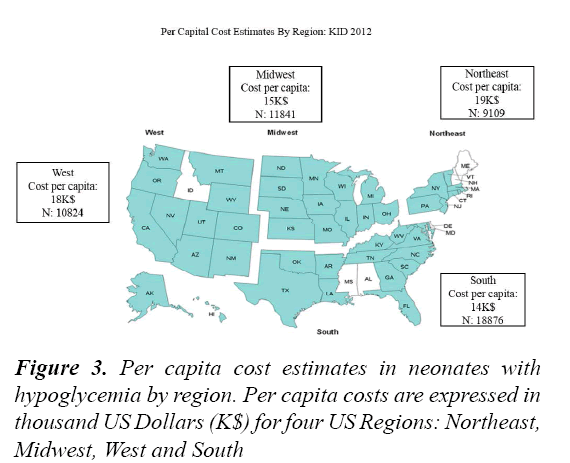 Figure 3: Per capita cost estimates in neonates with hypoglycemia by region. Per capita costs are expressed in thousand US Dollars (K$) for four US Regions: Northeast, Midwest, West and South

Table 1 represents characteristics of neonates with hypoglycemia that were categorized into two subgroups.

Table 1: Characteristics of neonates with hypoglycemia by prematurity status

The area under the ROC curve (0.95, 95% CI 0.948- 0.953) indicated the predictive accuracy of the multivariate model. In addition, the results from the D-P goodness of fit (d=3820, df=3722) also expressed that the values for deviance (d) are not much larger than their degrees of freedom, suggesting that the fitted model cannot be rejected and leads to the conclusion that the model fits well [18].

Our analysis of the 2012 HCUP KID database shows that hospital cost estimates in neonates with hypoglycemia consumed 11% of the resources associated with hospital births. We determined a 5% prevalence of NH among in-hospital births in the U.S during the year 2012. We also determined that medium and large hospital bed sizes, LOS, NPR, teaching hospitals, composite neonatal comorbidities, prematurity, occurrence of chronic conditions, and mortality were independently associated with increased hospital cost estimates in neonates with hypoglycemia.

Previous studies have focused on estimations of the economic cost of hypoglycemia in the adult population [11- 16]. To our best knowledge, this is the first study providing an empirical estimate of the hospital cost of neonatal hypoglycemia at the national level. It is worth noting that 100% of mortality and higher morbidity (51%) occurred in the non-premature group. As premature neonates are usually treated in neonatal intensive care units that provide around-the-clock care, non-premature babies appear to be prone to mortality and various hypoglycemia related comorbidities. This result is consistent with previous studies [20-22] in that neonates with asymptomatic hypoglycemia may easily be neglected of proper care which may lead to acute comorbidities and even death. As the majority of hypoglycemic cases are asymptomatic [25], enough emphasis should be given this subgroup.

At this juncture, an explanation of the cost-to-charge ratios (CCRs) is warranted. The HCUP KID contains data on total charges for each hospital in the databases. This charge information represents the amount that hospitals billed for services but does not reflect how much hospital services actually cost [23]. Cost information was obtained from the hospital accounting reports collected by the CMS. Statistical imputation for missing values and internal validation studies were carried out to enhance the accuracy of the CCRs [24]. Most hospital-based studies use total charge as a proxy measurement for actual cost [25]. This may lead to drawing unwarranted conclusions about economic efficiency and hospital resource utilizations [25]. To maximize the accuracy of the cost estimation, our study used a more accurate cost by converting the total hospital charge to hospital cost estimates using CCRs.

We recognize that there are some limitations associated with this study. The ICD-9-CM classification system is imperfect for case identification, as it was created for reimbursement rather than research purposes. As a result, important clinical conditions pertinent for outcome research may have been missed. Because KID 2012 lacks individual identifiers for states, we were not able to conduct comparative analysis among various states. However, despite the potential limitations, the HCUP KID database is the largest validated and publicly available all-payer pediatric inpatient care database [17] that can be used to evaluate national cost estimates, resource utilization, and economic burden of hospitalization in the pediatric population.

In conclusion, this study demonstrated that neonates with hypoglycemia consumed 11% of resources associated with hospital births while accounting for only 1.5% of hospitalization. We also demonstrated that hospital length of stay, hospital bed size, teaching hospitals, number of procedures performed, chronic conditions, comorbidity, prematurity, and in-hospital mortality were independently associated with increased hospital cost. Our results also suggested that non-premature hypoglycemic babies should be provided with more care to reduce acute comorbidities and death during hospitalization.