A 59-year-old woman presented with left blepharoptosis after clipping for treatment of subarachnoid hemorrhage from a ruptured internal carotid-posterior cerebral artery aneurysm. Neuro-ophthalmological examination revealed postganglionic Horner?s syndrome on the left side associated with left optic tract syndrome. The left optic tract near the aneurysm was damaged directly or indirectly as a result of ischemic insult during the clipping procedure. Aneurysmal rupture during clipping procedures could lead to extracranial internal carotid artery collapse and occlusion, causing ischemic damage to the sympathetic plexus.

A 59-year-old woman suffered subarachnoid hemorrhage caused by the rupture of a left internal carotid-posterior cerebral artery (IC-PC) aneurysm in September 2007. She was treated by clipping which was complicated by of rupture of the aneurysm. After the intervention, she experienced left blepharoptosis and was referred to our hospital for the treatment in April 2014. Her visual acuity was 20/20 in both eyes. Pupils measured 5 mm OD and 3.5 mm OS in the dark (Figure 1A), 3 mm OD and 2.5 mm OS in light, constricting briskly to light OU. There was no afferent pupillary defect. Her ocular motility was 100% in all directions without nystagmus. She was orthotropic in all directions. Humphrey visual field testing revealed right in congruous hemianopia (Figure 2A). Her palpebral fissure width was 9mm OD and 7mm OS. Corneal sensation was normal. Ocular Coherence Tomography revealed a bowtie nerve fiber layer defect pattern around the optic disc (Figure 2B). Systemic neurological examination revealed motor aphasia, right hemiplegia, and sensory deficit on the entire right side of the body including face. After instilling 10% cocaine, her pupils measured 7 mm OD and 4mm OS (Figure. 1B); after instilling 1% hydroxyamphetamine, her pupils measured 7 mm OD and 5 mm OS (Figure 1C); after instilling 0.1% epinephrine, her pupils measured 5 mm OD and 7 mm OS (Figure 1D). Following these results, we diagnosed postganglionic Horner’s syndrome on the left associated with left optic tract syndrome. Brain MRI revealed a left middle cerebral artery infarction included the optic tract (Figure 3A). Computed tomographic angiography revealed a left internal carotid artery obstruction (Figure 3B). 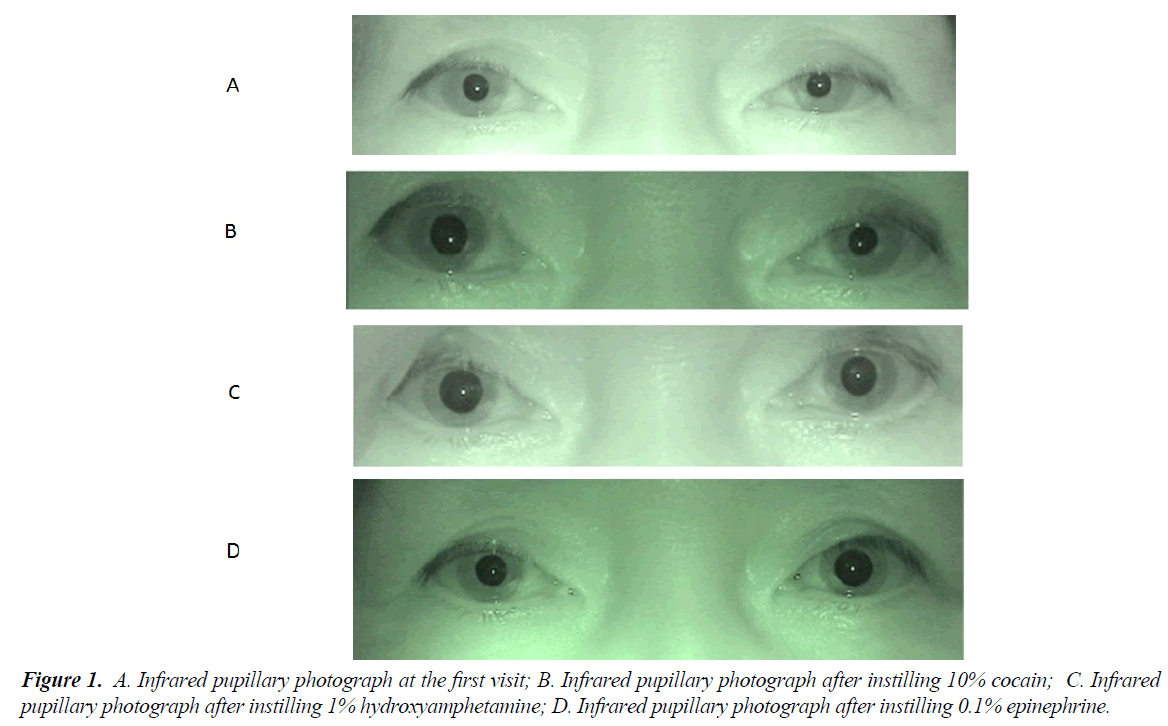 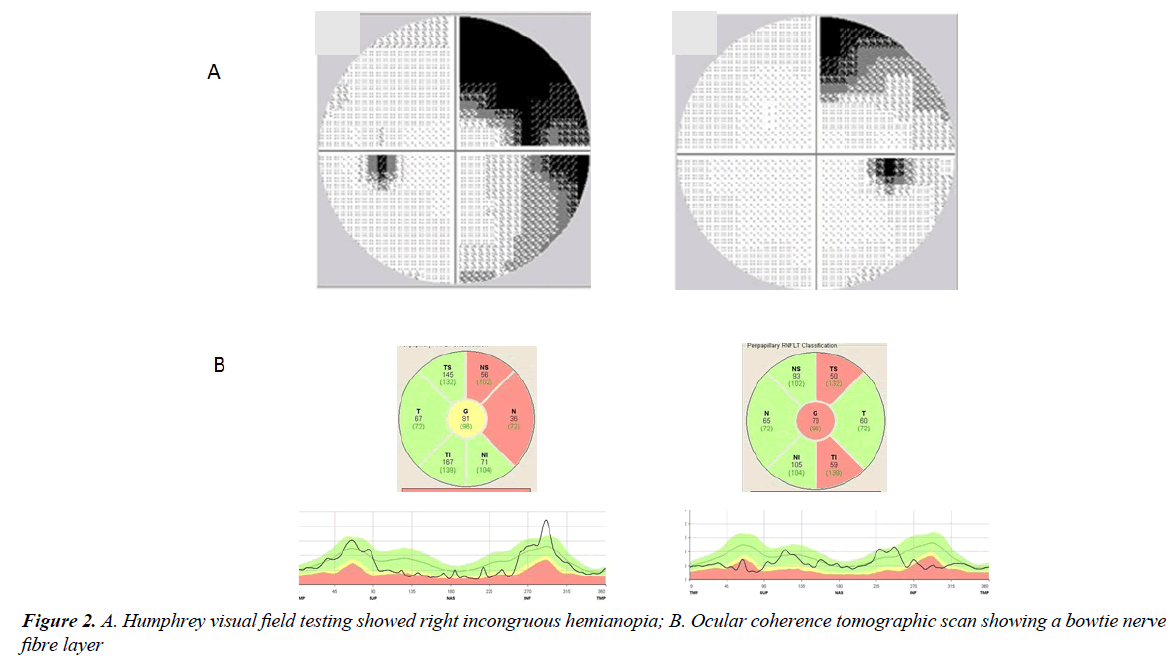 The optic tract is located near a bifurcation of IC-PC [1]. Therefore, the left optic tract near the aneurysm was damaged directly or indirectly because of ischemic insult during the clipping procedure for the IC-PC aneurysm. The sympathetic plexus around left internal carotid artery is located in an extra cranial portion of ICA and it is difficult to directly damage to the extra cranial ICA by interventions for IC-PC aneurysm because of the presence of the dura mater [2]. Therefore, we believe that rupture of the aneurysm during clipping collapsed the extra cranial ICA and the occlusion led to ischemic damage to the sympathetic plexus.

In conclusions, sympathetic nerve paresis of the pupil can occur after clipping of an IC-PC aneurysm associated with subarachnoid hemorrhage.