After years of query, we found that hoof of mule, a compound with contraceptive effect, had been used more than a century ago by the nomadic populations of Iran. We tested the effects of Hoof on female rats. Hoof was administered orally (0.12 g/kg) for 3 days and the rats were mated on day 10 after the last administration. The mean number of pups 5 hours after delivery on day 21 was 14.67 ± 0.21 for the control group (Group-A), 4.16 ± 0.40 for rats experiencing their first pregnancy (Group-B), and no pups for rats experiencing their second pregnancy (Group C). Analysis of the uterus demonstrated failure of embryo implantation in one of the fallopian tubes of Group B, and no implantation in Group C. Assessment of serum levels of estradiol and progesterone showed completely opposite trends to the normal situation of hormonal changes after delivery. In summary, hoof of mule would appear to act through a complicated mechanism that may involve hormonal pathways. This new claim requires further extensive studies to determine the exact mechanism. The effective compound in hoof that affects hormonal balance and causes contraception is currently being analysed and identified.

The Oral Contraceptive (OC) pill is the most common form of hormonal contraception used in the United States [1-3]. However, more than 1 million unwanted pregnancies in the United States are believed to result from OC failure, misuse, or discontinuation [4]. For this reason, many women around the world opt for surgical methods for permanent contraception [5,6]. A study by Patil et al. [7] concluded that more research and development is needed into new nonsurgical methods so that women can be guaranteed access to contraceptive methods that best meet their desires and needs, while reducing financial and logistical burdens. One possibly safer and effective alternative could be the use of natural contraceptive drugs. Our years of query among the nomadic people in the provinces of Fars and Kohgiluyeh and Boyer-Ahmad, Iran, revealed the use of a natural compound from hoof as a contraceptive. A number of elderly women claimed that their mothers and grandmothers had used hoof to prevent pregnancy about a century ago, with the desired result. This pilot experimental therefore investigated this claim, with the ultimate aim of developing a natural contraceptive drug.

We used adult male (4 months old), virgin female (3 months old), and non-virgin female (4 months old) Wistar rats. All experimental protocols were approved by the Institutional Animal Care and Use Committee and Ethics Committee of Yasuj University of Medical Science, in accordance with the provisions of the Declaration of Helsinki (as revised in Brazil in 2013). All efforts were made to minimize the number of animals and decrease their suffering.

Small pieces of hoof were removed and ground into a powder. We chose this way of administration as that is how the nomadic woman used this compound as a contraceptive drug. Twentyfour adult female rats were divided into four groups, as follows: (A) Control 15, PBS-treated rat; (B) Control 21, PBStreated rat; (C) First pregnancy experience, hoof -treated rat; (D) Second pregnancy experience, hoof-treated rat. Rats in the control 15 group were sacrificed on day 15 of pregnancy. All treatments (0.12 g/kg) were administered orally for 3 days, followed by 10 days without any other interventions.

Ten days after the last administration of hoof, 24 female rats and 12 male rats were used for mating at a male: female ratio of 1:2. Each cage of female rats, containing 2 females, was housed overnight with one sexually mature male rat, and vaginal smears were used to evaluate the right time for mating and pregnancy. At the beginning of the light phase the following morning, vaginal smears were obtained from all females and observed with a light microscope to check for the presence of sperm. Gestation Day (GD) 0 was deemed the day that sperm were present. After successful mating, all female rats were housed singly in plastic bottom cages with additional nesting materials. All animals were maintained and fed under standard laboratory conditions under artificial 12-h light/dark cycle (lights on from 08:00 h) and temperature was maintained at 20-24˚C with relative humidity at 35-60%.

The expected day of delivery (birth) in rats is GD 21-22. Pregnant females were checked hourly by at least two investigators from day 19 to monitor for possible delivery and pup mortalities. The rats started to deliver at day 21. Rats were anesthetized and sacrificed with 4% chloral hydrate, 5 hours after the first sign of delivery (all deliveries were done during this time). Note: some rats did not show any delivery. We sacrificed all rats at the same time to ensure the same point post mating. The pups were counted and serum, ovary, and uterus samples were prepared from the adult rats. The implantation sites were counted in the uterus of all rats.

Estradiol and progesterone levels in the serum were determined by using ELISA kits according to the kit protocol (Sigma Aldrich, USA).

The effect of hoof administration on the mean number of pups is shown in Figure 1 and Table 1. The rats in the control group had 14.67 ± 0.21 pups with no mortalities. This value decreased to 5.00 ± 0.51 pups in Hoof-treated rats that were experiencing a first pregnancy (p<0.0001), with a mortality of 0.84 ± 0.40 pups in this group. Hoof administration completely prevented pregnancy in the rats experiencing a second pregnancy, and there were no pups on day 21.

Table 1: The effect of hoof on the number of pups. 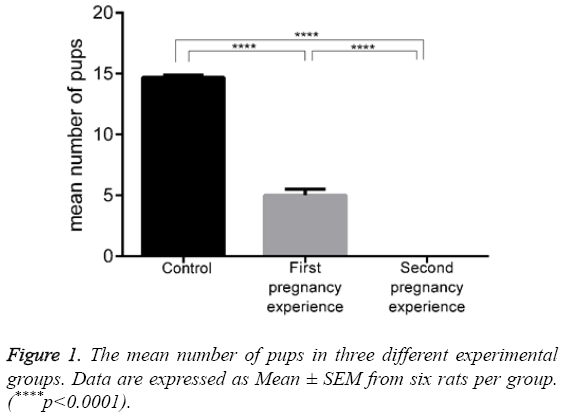 Figure 1: The mean number of pups in three different experimental groups. Data are expressed as Mean ± SEM from six rats per group. (****p<0.0001). 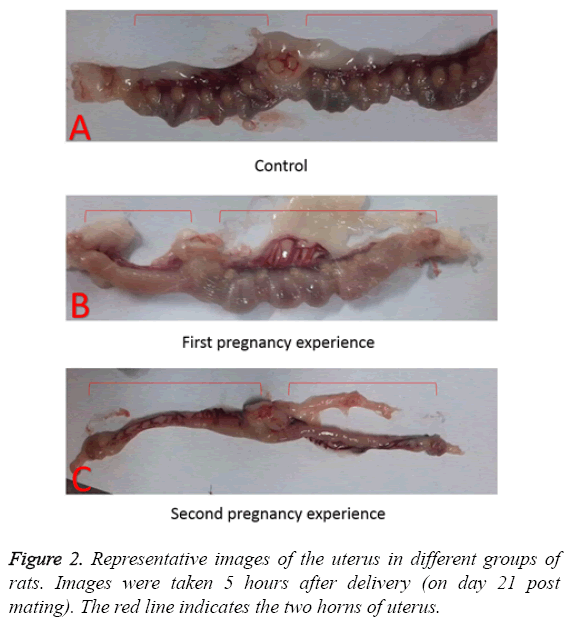 Figure 2: Representative images of the uterus in different groups of rats. Images were taken 5 hours after delivery (on day 21 post mating). The red line indicates the two horns of uterus. 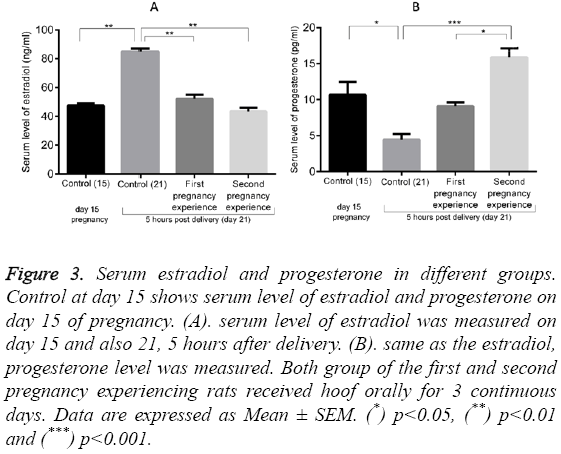 This study presents a novel view of the use of natural compounds to improve human lives by confirming the contraceptive effect of hoof of mule claimed by nomadic women. The pup counts recorded in this study verified that hoof clearly acts like contraceptive drug. However, the hoof effects differed between cases that experienced pregnancy for the first versus the second time, suggesting that the underlying mechanism of action of this compound is unlike that of commonly used contraceptive drugs. The freshly isolated uteruses showed no signs of implantation sites in the rats experiencing a second pregnancy, but this effect was not as complete during the first pregnancy, where some implantation sites were found.

Measurements of estradiol and progesterone concentrations revealed completely opposite results in the hoof-treated rats compared to the normal conditions reported in other studies. For example, Puri and colleagues showed a clear pattern of progesterone and estradiol changes during pregnancy in rats [8], where the levels of progesterone in both uterine vein plasma and uterine tissue started to decline on day 19 of pregnancy, but showed no further significant declines to day 22. Conversely, the levels of estradiol began to rise after day 20 of pregnancy, reaching a peak level on day 21. During delivery, the estradiol level was about 3 to 4 fold higher than on day 15 to 19 of pregnancy. Our measurements of hormone levels on day 15 and day 21, the same time range used by Puri et al., indicated that hoof administration induced a pathological state. Most probably, a change in the secretion patterns of sex hormones, including progesterone and estradiol, is one of the possible mechanisms underlying the effects of hoof on pregnancy. In contrast to our results, a study on normal humans showed a downward trend for progesterone concentration after delivery for several days [9].

Our queries of the nomadic women who have used hoof revealed that they did not experience any side effects, including cerebral vascular, gastrointestinal, and cardiac effects. Numerous studies have used oestrogen plus progestin to validate the beneficial role of these hormones in different patients and healthy cases [10-12], Chemically, hoof consists of protein, and variations in the amino acid content of proteins have been shown in hoof from different sources [13,14]. These amino acids and their ratios could therefore be possible effective ingredients that need further analysis.

In summary, we have confirmed the potential of hoof for the prevention of pregnancy in these initial experiments, but further studies are needed. The active compounds are under analysis, but overall, hoof of mule appears to be a promising natural drug for contraception.

This work was supported by a Cell and Molecular research center of Yasuj University of medical science, Yasuj, Iran.

The authors declared no conflict of interests.