Homocysteine: A risk factor for the development of cardiovascular events in chronic respiratory diseases

Viruses spread following quite different ways to host and find settlement in specific organs and tissues. Bacterial, viral and fungal agents take place in the etiology of respiratory tract infections, but it is known that the virus is in the foreground [1]. The main respiratory viruses associated with respiratory diseases are rhinovirus, corona virus, influenza, parainfluenza, adenovirus and respiratory syncytial virus (RSV). These viruses lead to the exacerbation of chronic respiratory diseases [2,3]. Chronic respiratory diseases affect mainly the lungs and airways due to variety factors such as tobacco use, air pollutants, allergens, bad-diet and obesity and environmental stress [4]. Asthma and COPD are the most common chronic respiratory diseases and both have similar properties such as risk factors, pathogenic processes, diagnosis, treatment and protection [5]. Asthma is a chronic inflammatory disease of the airways characterized by variety of recurring symptoms. Individual (genetics, gender and obesity) and environmental (infections, smoking, dust, pollutants and allergens) risk factors play an important role in the development of asthma [5,6]. COPD is an inflammatory disease which includes lung diseases such as chronic bronchitis, airways disease and emphysema, and recently there has been an increase in the prevalence of the disease worldwide [7,8]. COPD has a certain risk factors, but smoking has been conventionally known to be the most important one of these risk factors. Other factors are indoor air pollution caused by biomass fuel, all kinds of organic and inorganic pollutants and outdoor air pollution [9,10]. COPD associated with an abnormal inflammatory response occur via these risks factor.

Serum samples of one hundred sixty patients were used in the exacerbated period of asthma and COPD in our study. The criteria for the control group were having no known disease or acute/chronic symptoms and respiratory viral agents. This group was created with 25 healthy individuals. The study was conducted in accordance with the guidelines of the Declaration of Helsinki and approved by the Kırıkkale University Hospital Ethics Committee.

The ELISA kits (DRG Instruments GmbH, Germany) and serological methods were utilized for the determination of adenovirus and RSV positivity in serum samples of 25 healthy individuals, 86 asthma and 74 COPD patients, (Measuring wavelength: 450 nm; reference wavelength: 620 nm). The tests were performed exactly according to manufacturer's instructions. The control group individuals were checked in terms of whether they had these viral agents.

Measurement of homocysteine levels was performed with HPLC (Agilent Technologies 1200 series, USA; kits: Immuchrom GmbH, Germany). This study was done according to the manufacturer's instructions: Firstly, the samples were reduced and derivatised for the determination of homocysteine. Then, albumin bound and the oxidized homocysteine were reduced and converted into a fluorescent probe. During a precipitation step high molecular substances were removed. The samples were respectively cooled, centrifuged and injected into the HPLC system. The isocratic separation was done through HPLC at 30°C using a “reversed phase” column. One run lasted 5 minutes. The quantifications were performed by the delivered plasma calibrator; the concentrations were calculated by the “internal standard method”. Calculation;

Statistical analysis was performed using SPSS 20.0 software (SPSS Inc., USA). All measurements were taken in triplicate. Besides, all data were reported as means ± standard distribution (SD). The critical significance level for the statistical tests performed was set at 0.05. After assessing the normality distribution (Shapiro-Wilk test) and homogeneity of variances, non-parametric Mann Whitney-U and Kruskal Wallis H-tests were used for the comparison of differences between means.

Our study examined serum samples of 160 patients diagnosed with asthma (n=86) and COPD (n=74) as well as 25 healthy individuals. Demographic data of all groups are presented in Table 1 and were evaluated statistically. While the mean age of asthma and COPD patients was 58.4 ± 4.0 and 61.4 ± 6.0 years, mean age of control group was 56.6 ± 8.2 years. Nostatistically significant relationship was determined in terms of two groups’ age (p˃0.05).

Table 2: The ratio of respiratory Syncytial Virus (RSV), Adenovirus and RSV/Adenovirus in both Asthma and COPD.

Table 3: Values of homocysteine (μmol/l) of patients with COPD, asthma and control group and their 95% confidence intervals. 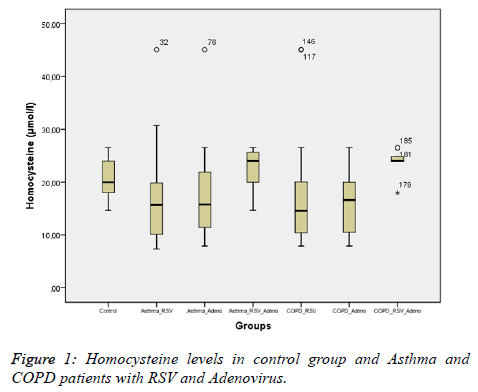 Figure 1: Homocysteine levels in control group and Asthma and COPD patients with RSV and Adenovirus.

Respiratory disease caused by viral infections is common in humans. In patients with respiratory diseases such as asthma and COPD, the morbidity caused by respiratory virus infection is very important [18]. Asthma and COPD are significant causes of growing morbidity and mortality in all countries of the world. COPD is the fourth leading cause of death in the world [19]. However, it is expected to rise to third rank in 2030 and to rank fifth in 2020, due to the increase of smokers’ addiction levels. Therefore, respiratory diseases are a major socio-economic problem for both developed and developing countries today [20]. The exacerbations of asthma and COPD are major causes of morbidity for all ages. In these periods, it is very likely that an increase in the rate of morbidity could occur via with viral agents. Sigurs et al. explored whether a relationship existed between a viral infection and development of asthma. The data by Sigurs et al. suggest that severe viral infections with asthma increase the likelihood of development of asthma [21]. On the other hand, cardiovascular disease is frequently a cause of morbidity encountered in asthma and COPD patients. The most important evidence of this situation is the endothelial dysfunction in the pathogenesis of respiratory disease [13]. Moreover, endothelial dysfunction is stimulated by increased homocysteine [22]. Hence, we aimed to determine homocysteine levels in individuals with asthma and COPD to predict the risk factors that could lead to the development of cardiovascular diseases. In our study, the homocysteine levels in asthma and COPD patients were found statistically significantly higher than the control group data (p<0.05).

Andersson et al. examined the plasma from nineteen patients with COPD and twenty nine healthy individuals [23]. Similarly, they found that homocysteine levels were higher in COPD group than the control. At the same time, in our study, the relationship between sex and homocysteine levels in individuals with asthma and COPD was evaluated and the importance of sex was revealed in these patients. When the relationship between homocysteine levels with male gender was evaluated in our study, a statistically significant relationship was determined between these two parameters (p<0.05). Besides, the highest homocysteine level in male gender is stated in many studies as in our study [13,24]. The comparison of our results with the literature is limited because parameters of our study were less than the parameters of other studies. But our data is sufficient in terms of conducting statistical calculates and obtaining results.

In conclusion, the respiratory viruses such as RSV and adenovirus lead to the exacerbations of chronic respiratory diseases. These chronic respiratory diseases have led to increased morbidity and mortality by affecting cardiovascular events. It is known that there is a strong link between cardiac disease and homocysteine levels. The determination of the homocysteine levels reduces the risk of mortality and morbidity in individuals with asthma or COPD with viral respiratory agents and helps to predict the risk factors that could lead to development of cardiovascular diseases.

We would like to thank Dr. Mesut ARSLAN, MD, Corum Chest Diseases Hospital, Clinic of Chest Diseases, CORUM, Turkey, for clinical evaluation of the patients.