Infectious Mononucleosis characterized by systemic complaints consisting primarily of fatigue, malaise, fever, sore throat and generalized lymphadenopathy. The case study highlights the importance of this transient and earliest clinical sign which can help in arriving at a correct diagnosis and proper management.

Infectious Mononucleosis (IM) is the clinical syndrome caused by Epstein-Barr Virus (EBV). Originally described as glandular fever, it derives its name from the mononuclear lymphocytosis with atypical-appearing lymphocytes that accompany the illness [1]. It is characterized by systemic complaints consisting primarily of fatigue, malaise, fever, sore throat, and generalized lymphadenopathy. The presence of “Hoagland Sign”, i.e., early and transient edema of upper eyelids in IM is a less common clinical feature [2]. Its presence can be an important clue in diagnosis of IM caused by EBV. A case of an eight-anda- half year old girl with Hoagland Sign in IM is reported.

The child presented with high grade fever, nasal congestion, throat pain and fatigue for three days. The parents noticed swelling over both the upper eyelids one day before she was seen in the department. There was no redness, watering and itching in the eyes. She did not have any skin rash, joint pain and urinary complaint. She was febrile (axillary temperature -102.4ºF) with pulse rate of 100/min, respiratory rate of 26/min and normal blood pressure (102/68 mm Hg). ENT examination revealed posterior pharyngeal wall congestion few non-significant cervical lymph nodes.

She had bilateral edema of upper eyelids (Figure 1) without conjunctivitis. Systemic examination was normal except for mild splenomegaly. Over next two to three days, she developed painful exudative tonsillitis with increase in the size of cervical lymph nodes and developed generalized lymphadenopathy.

Considering the clinical course of fever, exudative tonsillitis and bilateral upper eyelid edema generalized lymphadenopathy, with blood picture demonstrating lymphocytosis with atypical lymphocytes and raised AST, IM was suspected. The diagnosis was confirmed by demonstrating positive serological markers VCAIgM (Serum EIA-1.99; Positive more than 1.1). She was managed symptomatically. Her lid edema disappeared in two days and she recovered without any complication over next few days. 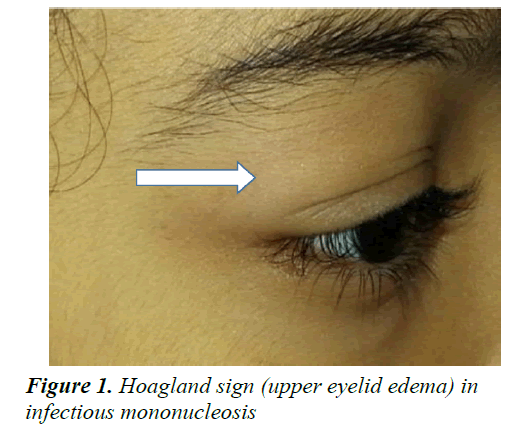 Infectious mononucleosis (IM) is an infectious, viral disease caused by the EBV. This infection is most common in early childhood, with a second peak during late adolescence. Most EBV infections in infants and young children are either asymptomatic or present as mild pharyngitis with or without tonsillitis. However up to 75% of infections in adolescents present as IM [3].

The diseases produce the classic clinical triad of fever, pharyngitis and lymphadenopathy. A prodrome of fatigue, malaise and myalgia may last for 1-2 weeks before the onset of fever, sore throat, and lymphadenopathy. Fever in IM is generally considered to be rather high (38-39°C) and lasts 1-2 weeks; however, it may persist for more than 1 month [3].

Periorbital edema is a less common feature in IM. Its association with IM was first described by Hoagland and is referred to as “Hoagland sign’’ [4]. He reported this finding in one third of IM cases in 1952. Similar findings were also reported by Bass as a helpful clue to diagnose EBV mononucleosis [5]. Few cases with this clinical feature are reported in the literature. In a retrospective study on profile of EBV associated Infectious Mononucleosis from India, periorbital edema as a clinical feature does not find a mention [6].

Hoagland sign is an early and transient bilateral upper lid edema occurring in patients with IM and can be the presenting manifestation of the disease before the exudative pharyngitis or cervical lymphadenopathy [7,8]. The sign is usually present only for few days of the clinical presentation of the illness [9]. The eyelid edema is usually not accompanied by conjunctivitis, inflammation or tenderness of the eyelids. The aetiology of this less common finding is unknown, but nasopharyngeal replication of virus, lymphoproliferation or lymphatic obstruction is assumed to be the contributing factors [3].

This sign being an early manifestation, presence of more than 20 atypical lymphocytes may not be obtained in the differential counts. Similar observations were noted in the reported case. Hoagland’s criteria for diagnosis of infectious mononucleosis in such a scenario are 50 percent lymphocytes and at least 10 percent atypical lymphocytes in the presence of fever, pharyngitis and adenopathy and confirmed by positive serologic test [10].

Antibodies to viral capsid antigen (i.e., VCA-IgM and VCA-IgG) are more specific for diagnosis of EBV infection [1]. Confirmation of diagnosis is generally not needed in routine clinical practice unless the patient has some atypical manifestations. In the reported case the VCA-IgM was positive thus confirming the diagnosis of IM.

Absence of erythema, inflammation, itching, use of topical medications, cosmetic agent /drug intake, pain in the eyes or tenderness of eyelids ruled out conditions like allergic/ contact dermatitis, angioedema and periorbital cellulitis. Kawasaki Disease was not considered as she had fever; mild to moderate grade with no conjunctival injection, absent erythematous rash on trunk, strawberry tongue and erythema of hands and feet thus not satisfying the diagnostic criteria. Possibility of Dengue fever was ruled out as there was no retro-orbital pain, rash and conjunctival injection and absence of systemic features. There was no history of eating undercooked meat thereby excluding Trichinosis.

The classic triad of fever, pharyngitis, and lymphadenopathy in IM is well known. The occasional presence of unusual features can be misleading and its awareness is important to prevent delayed or wrong diagnosis. Presence of Hoagland sign can be an important clue in diagnosis in the early stage of illness. The above case highlights the importance of this transient and earliest clinical sign which can help in arriving at a correct diagnosis and proper management.