Histomorphometric evaluation of cortical bone surrounding mini-screw: Why is the insertion torque critical for primary stability?

Objective: Mini-screws have widely been used as a temporary anchorage device. We previously reported the importance of insertion torque for primary implant stability. However, it remains unclear whether or not the destruction of cortical bone surrounding the mini-screw depends on the magnitude of the insertion torque, and whether or not the destroyed bone can be repaired around titanium alloy miniscrews.

Materials and Methods: Self-drilling type titanium alloy mini-screws were placed into the rat maxillary bone. Insertion torque and screw diameter were varied and their effect on primary stability of miniscrew was evaluated. Bone remodeling around the mini-screw and the ratio of osteoid and calcified bones was examined using Villanueva bone staining on each section. Moreover, during the experimental period, the tensile strength of the implanted screw was measured.

Conclusions: Our findings emphasized that we should use an optimal insertion torque at 5-10 N.cm for mini-screw implantation to establish primary stability.

We have already reported that cortical bone is broken by excessive insertion torque, resulting in significant loss of primary stability [7]. However, it is still unclear whether or not the damaged bone can be repaired around mini-screws.

Certain consensus has been obtained by previous studies of dental implant [8-10], that the healing time after implantation is important for stable bone remodeling leading to high success rate. Experimental studies have also demonstrated that pure titanium mini-screws used for orthodontic anchorage can be immediately loaded by occlusal force without any reduction in stability [11-13]. Roberts et al. [14] suggested that a 6 w healing period is adequate for implants to resist orthodontic forces in rabbits. In addition, Deguchi et al. [15] showed that bone remodeling and osseointegration were not impaired by orthodontic loading once the screw was implanted into the bone. However, in the case of self-drilling type titanium alloy mini-screws, it still remains unclear whether or not bone remodeling enough to enhance stability of mini-screws occurs around the implant surface.

The aim of this study was to evaluate the condition of the cortical bone surrounding mini-screws and to examine optimal insertion torque in the aspect of the bone remodeling. Therefore, in this study, we examined the influence of screw diameter and insertion torque on the stability of titanium alloy mini-screws, and the tensile strength of bone around the miniscrews during healing period.

Mini-screws were placed 2 mm distal to the upper incisors, and the insertion angle was adjusted to 90º to the cortical bone surface (Figure 1A). All mini-screws were inserted using the self-drilling method and divided into the following two groups by adjusting the pressure force: high driving torque group (HDT group: 15-20 N.cm) and low driving torque group (LDT group: 5-10 N.cm). At the end of implantation, we measured the insertion torque using an industrial hand driver (FTD20CNS, TOHNICHI, Ltd., Tokyo, Japan). Immediately and 7, 28, and 56 d after implantation, the rats were scarified, and the maxillary bone surrounding the micro-implant was resected and examined. 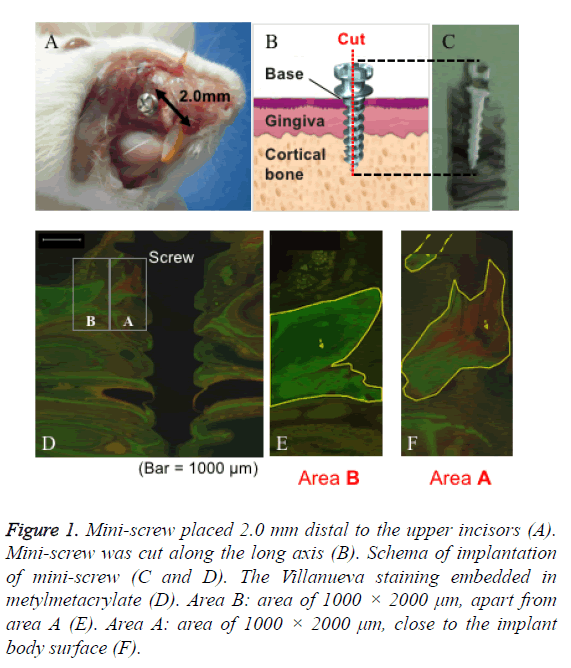 An analysis area of 1000 × 2000 μm was defined on each section as illustrated by areas A and B in Figure 1D. Area A was on the micro-implant surface and area B was 1000 μm away from area A (Figures 1E and 1F). Villanueva staining solution detected calcified and osteoid bones surrounding the mini-screw. Under the fluorescence microscope, calcified and osteoid bones can be distinguished by green or jade green and red colors, respectively. Fluorescence intensity was quantified using analysis software (BZ-II analysis application, KEYENCE Co.), and the luminance values of calcified and osteoid bone were used to calculate the osteoid bone/ calcification bone ratio (O/C ratio). We used the O/C ratio to evaluate bone remodeling in the cortical bone surrounding mini-screws. High O/C ratio values indicated increased osteoid bone formation and active remodeling.

Rat maxillary bone specimens were fixed with 70% ethanol for more than one day and were firmly fixed with high strength dental stone (NEW FUJIROCK, GC, Tokyo, Japan). Then, the mini-screw was pulled to the vertical direction against the implanting direction to measure the tensile strength by tensile test machine (EZ-TEST, Shimadzu Co., Kyoto, Japan) (Figure 2). 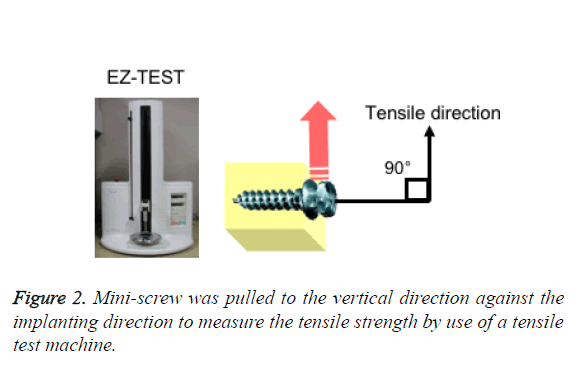 Figure 2: Mini-screw was pulled to the vertical direction against the implanting direction to measure the tensile strength by use of a tensile test machine.

Statistical analysis was performed using analysis of variance and a multiple-comparison test (Fisher’s). Confidence levels of p<0.05 and p<0.01 were defined as statistically significant. 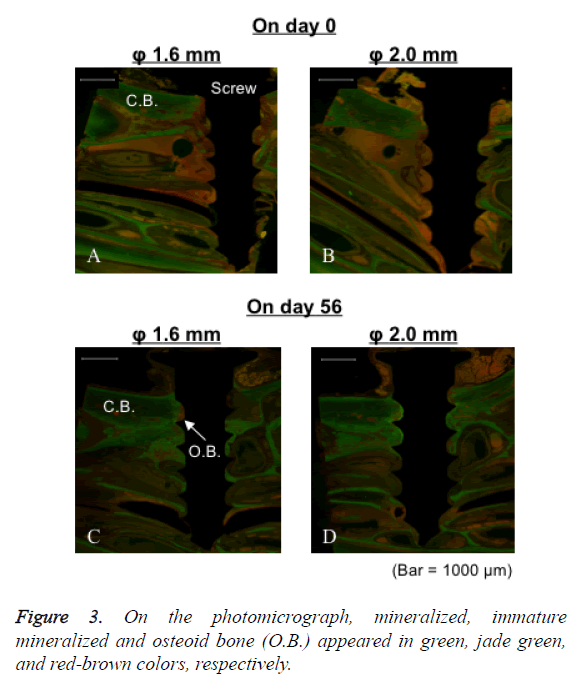 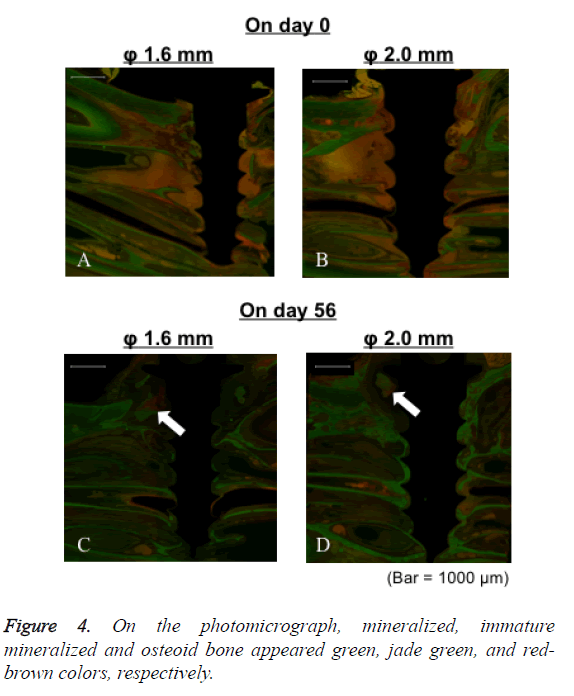 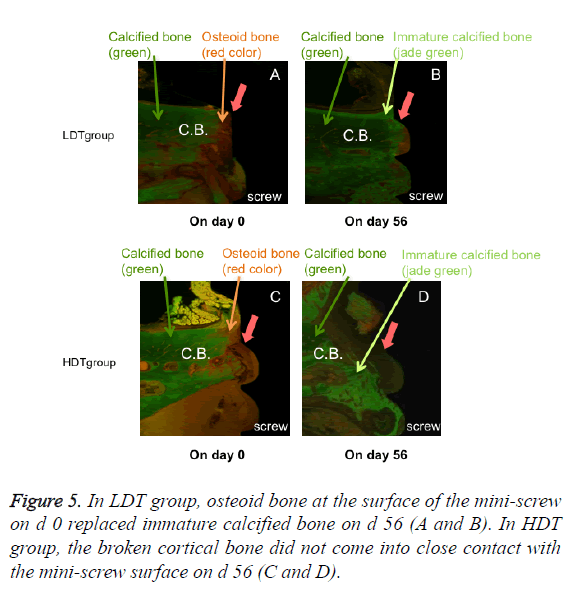 Figure 5: In LDT group, osteoid bone at the surface of the mini-screw on d 0 replaced immature calcified bone on d 56 (A and B). In HDT group, the broken cortical bone did not come into close contact with the mini-screw surface on d 56 (C and D). 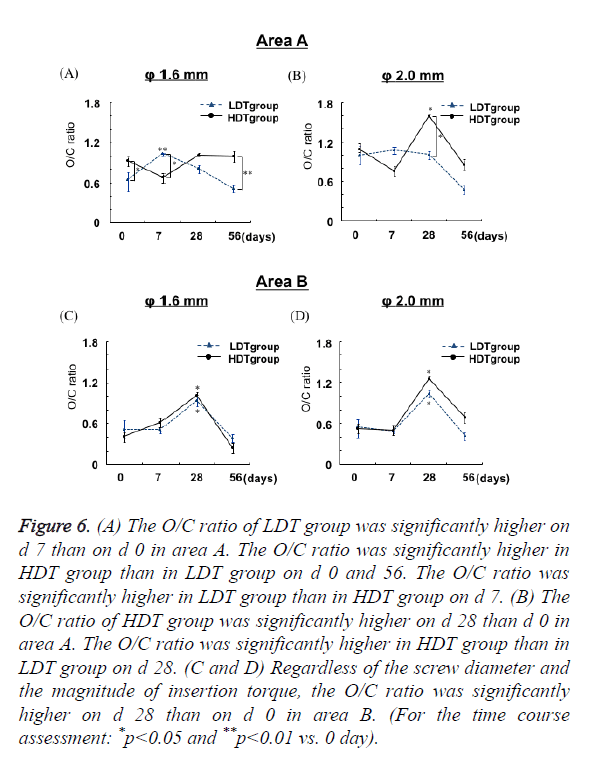 The O/C ratio was significantly (p<0.05) higher on d 28 than d 0 in area B, regardless of the screw diameter and driving torque (Figures 6C and 6D). Bone remodeling was almost completed on d 56 because the O/C ratio was similar in all groups immediately after implantation. Both in LDT group and HDT group, differences in diameter had no substantial influence on the O/C ratio. 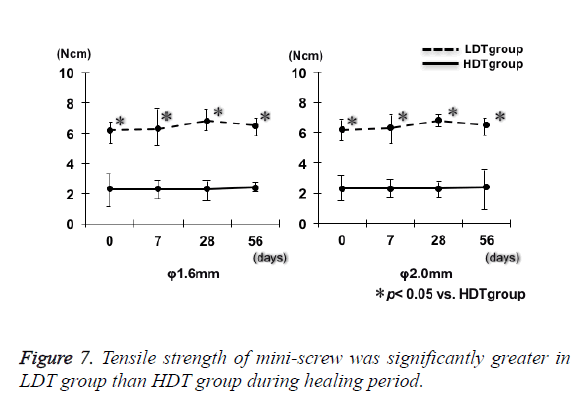 Peri-implant inflammation usually occurs after implantation and is followed by bone remodeling [16]. Bone healing occurs in the following three stages: an inflammatory stage, a fibroblastic stage, and a remodeling stage [17]. Bone remodeling is a continuous process of bone resorption and formation [18,19]. After implantation, inflammatory cells infiltrate the surrounding tissue and osteoclasts initiate bone resorption. This is followed by bone formation by osteoblasts to achieve osseointegration [20]. Bone healing should occur before soft tissue healing for successful osseointegration. If soft tissue healing starts before bone remodeling, fibrous soft tissue will invade the interface between the implant and surrounding bone. Healing in soft tissues (9-day turn-over) is faster as compared with bony tissues (2-4 month turn-over) [21].

It was reported that the O/C ratio reflects bone remodeling around the mini-screw after implantation and the osteoid bone was remodeled around the mini-screw by osteoclasts and osteoblasts [24]. Increased osteoid bone formation accelerates bone remodeling, and the process of bone remodeling is completed by the formation of lamellar bone [24]. Based on our previous report [7], it became clear that the condition of the contact between cortical bone and mini-screw affects initial stability, and trabecular bones surrounding screw are not tough enough to contribute to the mini-screw stability. Therefore, in this study, the O/C ratio was measured the cortical bone.

I would like to thank to Dr. Kazuhiro Ueki for his kindest guidance and support. This investigation was supported in part by Grant-in Aid for Scientific Research of Japan Society for the Promotion of Science (19890139).