Histomorphological spectrum of meningioma with variants and grading

Introduction: Meningiomas are a histologically diverse group of tumors derived from meningothelial cells. In this present study the clinical features, anatomical location, and histopathological spectrum of Meningioma were studied. Materials and Methods: The study included 103 CNS tumors operated during a one year period in various hospitals and clinics of dhaka, Bangladesh. All the cases of meningioma were studied by histopathological examination using H&E staining. Results: In this study, the most common age group was 40-49 years (35%). Female predominance (73.8%) was noted. Intracranial meningiomas (90.90%) were common than spinal meningiomas. The most common histopathological type was meningotheliomatous meningioma (50%). 94.3% of the meningioma was WHO grade I tumor. Conclusion: Meningiomas display a wide diversity of histopathological appearances. The majority are benign and hence curable by surgical resection. A few histological features and variants are associated with aggressive behavior and high risk of recurrence. Thus accurate histopathological diagnosis and grading of these tumors are essential.

In 1922 Cushing termed tumour originating from the meninges as meningioma [1]. They originate from the arachnidan cap cell, a meningothelial cell in the arachnidan membrane [2]. Meningioma’s account for 15% of all intracranial tumours and usually occur in fourth to sixth decades of life. They occur more often in females than in males [3]. Meningioma’s display a wide diversity of histopathological appearances. They are classified into benign, atypical or malignant types. Although most are benign, some of histological features and variants are associated with aggressive behaviour and high risk of recurrence even after complete resection. The WHO classification aims to better predict the clinical behaviour with the histological grading system [4]. The proper type, grading and histological features are very important for the management, treatment, prognosis, and follow up of the patients. The aim of the study was to analyse meningeal neoplasms, consecutively operated during a one year period, to note the frequency of various subtypes and grades of meningioma according to the WHO classification (2007).

This was a descriptive type of observational study conducted over a one year period at various hospital and clinics of Dhaka, Bangladesh. The study included 103 CNS tumors that underwent surgical resection from January 2014 to December 2014. The meningioma’s were studied in detail by histopathological examination using H&E staining. Parameters studied were age and sex distribution, anatomical location of tumor, clinical features, histological subtype, histopathological features, and WHO grade of the tumor. Mitotic figures were assessed in the areas of high mitotic activity by taking average of ten consecutive non overlapping high power fields.

A total of 103 cases diagnosed as meningioma by histopathological examination were studied. In this study the age group ranged from 15 years to 80 years (average 45 years). Female predominance (73.8%) was noted. Female to male ratio was 2.8:1 (Table 1). 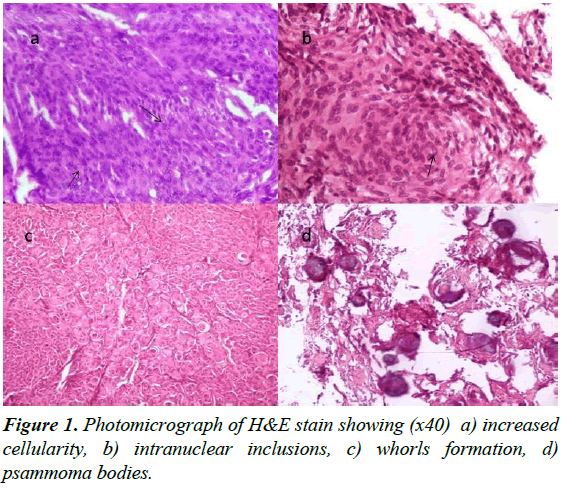 Meningioma was the second most common CNS tumor in studies by Chen et al (36%) and Nibhoria et al (34.8%) [5,6]. In our study, meningioma’s were common in the fourth decade. The results were similar to studies done by Shah et al. and Shrilakshmi [7,8]. A female preponderance (73.8%) was noted in the present study which was comparable to studies done by Thomas (75%) [9]. In this study the most common location of tumor was intracranial (90.9%) and were frequently at the convexity of the brain. The above results were similar to studies done by Shrilakshmi [8]. The most common clinical feature was headache (53.3%), followed by vomiting (14.6%) and seizures (10.7%). This was in concordance with Shah. Meningothelial meningioma was most common variant in the study by Nath et al accounting for 32% of cases [10]. In our study, meningothelial meningioma was 61.1% which was not comparable with the above study. Transitional variant was the commonest variant in a study done by Thomas (40%) [9] while in the present study it was only the second commonest (15.5%).

WHO grade I meningiomas have a relatively low risk of recurrence or aggressive growth. Various histologic patterns are observed including meningothelial, fibroblastic, transitional, psammomatous. Xanthomatous degeneration, metaplasia, and moderate nuclear pleomorphism are common in WHO grade I meningiomas. WHO grade II meningiomas are lesions with a higher rate of recurrence and more aggressive local growth. They are distinguished from lower grade meningiomas by having four or more mitoses per [10] high power fields or at least three atypical features (increased cellularity, small cells with a high nucleo-cytoplasmic ratio, prominent nucleoli, patternless growth, or necrosis). WHO grade III (Anaplastic/ Malignant) meningioma is a highly aggressive tumor. Mitotic rates are often high (>20 mitoses per 10 high power fields) [11]. In the present study, 94.1% of the cases were WHO Grade I tumor, 1.9% were WHO Grade II tumor, 3.9% were WHO Grade III. WHO grade I was the commonest grade in the study done in a hospital in Kenya by Wanjeri (94.7%) [12]. In our study we observed that high mitotic count is a significant criterion for determining the meningioma grade. Brain invasion was also a significant criterion associated with higher WHO grades. Nuclear pseudoinclusions and homogenisation characteristic of meningothelial cells were noted frequently in benign meningiomas (Table 5). Presence of psammoma bodies were protective prognostic factors for tumor recurrence [13]. We observed that psammoma bodies occur more frequently in benign tumors. The presence of lymphocytes, plasma cells and macrophages in the tumor tissue reflects various immune responses against the tumor [14]. Little is known about tumour infiltrating lymphocytes in meningioma which often co-localize with T cells, enhancing T cell responses by producing antibodies, stimulatory cytokines, and chemokines and serving as local antigen presenting cells (APCs) [15]. Interestingly, the presence of B cells in tumors is thought to have a paradoxical effect. In tumor immunity, activated B cells may play a beneficial role in the chronic immune process by expressing the co-stimulatory activities needed to activate naïve CD4+ T cells and by acting as APCs capable of promoting immune responses [16]. Whorls, fibrosis and prominent calcified vasculature were studied in our study (Table 5). It is proposed that VEGF (vascular endothelial growth factor) played an important role in the neovascularization of meningiomas, and increased fibrosis or whorl formation was commonly seen in meningiomas regardless of tumor grade possibly due to the meningothelial cell functions [17]. Necrosis is associated with higher grades and increase risk of recurrence [18]. No recurrent cases found in this study although grade I meningioma has a good percentage of recurrences, probably due to short period of the present study.

Meningiomas are slow growing neoplasms that exhibit a remarkably wide range of clinical spectrum and histologic appearances with female preponderance. They usually present with headache and vomiting and are frequently located intracranially. The majority are grade I meningioma with meningothelial meningioma as the commonest variant and are curable by surgical resection. A few histological features and variants are associated with aggressive behavior and high risk of recurrence. Thus, accurate histopathological diagnosis and grading of these tumors are essential.