Proteus mirabilis has previously been shown to be capable of persisting in the rat kidney for up to 8 weeks and induces many physiological changes following a single inoculation of the urinary bladder. The present study examined kidney tissue from infected animals for evi-dence of renal damage. The earliest histologic changes seen on the 2nd and 4th days, consisted of mild cellular sloughing and edema associated with mononuclear infiltration in the me-dulla and to a lesser extent in the cortex. On the 1st and following weeks, tubular atrophy, interstitial fibrosis, and a mononuclear infiltrate had advanced in the renal parenchyma re-sulting in chronic pyelonephritis. The observed renal degenerations with a corresponding ascending bacterial infection in the intra-renal reflux suggest that Proteus mirabilis is capa-ble of producing chronic pyelonephritis in the rats after a single reflux challenge.

Urinary tract infection (UTI) is an inflammatory response of the urothelium to bacterial invasion that is usually associated with the bacteruria and pyuria [1]. Proteus mirabilis (P. mirabilis) is one of the most common Gramnegative pathogens that infect the upper urinary tract. Proteus mirabilis causes UTIs with urinary tract abnormalities and is frequently isolated from the urine of elderly patients [2], children and infants [3] and pregnant women [4]. This bacterium has a propensity for localization in the kidney and in the bladder wash out. It is found in the kidney more often than E. coli and other bacteria owing to the production of urease and other virulence factors [5]. It can cause serious renal damage, such as acute pyelonephritis, bladder or renal stone, fever and bacterriemia [6].

It is possible that bacterial infection may induce many morphological changes. Tubular atrophy and interstitial fibrosis were observed in rats infected with Ureaplasma urealyticum [7]. Increased inflammation was detected in both kidneys and urinary bladders in mice transurethrally treated with E coli [8]. Tissue damage, bacterial colonization and inflammation were induced in the prostates of rats by P. mirabilis [9].

Bacteriological investigation for renal infection has shown that proteus is the second major genus, however P. mirabilis is found to be the most common species in causing UTI in Iraqi population [10]. Experimental model has been developed for ascending non-obstructive urinary tract infection in rats to study the renal functions caused by a strain of P. mirabilis isolated from Iraqi patients with UTI [11]. Aim of the present study is to observe the histopathological features that may be caused by the P. mirabilis strains from Iraq.

One hundred experimental and fifty control young adult female virgin Wister rats (150-180 g) were housed in plastic cages, had free access to laboratory chow and water. P. mirabilis recovered from the urine of an Iraqi patient with chronic UTI (attending Baghdad Medical City Hospital) was cultured in Brainheart infusion broth for 18 hours at 37°C prior to bladder inoculation.

Each experimental rat was inoculated through the urethra into the bladder with 0.5 ml of broth containing approximately 3×108 (log 8.5) viable organisms using an I.V. cannula. Control rats were inoculated with same volume of sterile broth. Ten experimental and five control animals were sacrificed at 2 and 4 days and at 1, 2, 3, 4, 5, 6, 7, 8 weeks after inoculation. The kidneys were removed and each kidney was bisected longitudinally into two halves; one half used for bacteriological study and the other half processed for morphological study. The halves used for bacteriological study were homogenized in 5 ml of sterile distilled water and serial dilutions (tenfolds) were prepared in phosphate buffered saline (PH 7.4), 0.01ml of each dilution was inoculated onto MacConkey agar “Oxoid 115” and incubated for 24-48 hours at 37°C. The viable counts of bacteria were expressed as the logarithm of colony forming units “Log CFU” per gram of kidney weight. The morphological halves were fixed in 10% formal saline for 48 hours, and processed for light and electron microscopy. All data were analyzed by using Student ttest. A p value of < 0.05 was considered to be statistically significant.

The number of bacteria recovered from rats kidneys infected with P. mirabilis is given in figure 1. Ascending infection was confirmed in 100% of the rats as determined by recovery of the bacteria from the kidneys 2-4 days and 1-8 weeks after bladder infection. The bacterial infection varied throughout the experiment; there was a significant reduction (P < 0.01) in bacterial number recovered from the kidneys on the 2nd day, the count was log 5.4 ± 0.78 compared to bladder inoculation (log 8.5). On the 4th day, the recovered bacterial count increased sharply (Log 10. 3 ± 0.15) [P < 0.05] and remained about this level for about 7 days (P < 0.05). Over the 2nd week there was a rapid decline in bacterial number (Log 5.93 ± 2.21) [P < 0.05] which remained approximately at the same level until the end of the experiment. Mortality was not observed in the experimental rats during the period of this study and no bacterial infection was demonstrated in the controls.

Figure 1: Number of bacteria recovered from rat kidneys from day 1 to 8 weeks after bladder inoculation with P. mirabilis.

On the day 2 and day 4 of the experiment, there was a mild change in the kidneys of the treated rats including hyperemia and edema of the medullary areas associated with infiltration of the inflammatory cells. In the mean time, the renal tubules showed signs of cloudy swelling with hydropic degeneration. There was dilatation of the proximal convoluted tubules and some of them lost their epithelial lining and filled with a heterogeneous eosinophilic material and cell debris. These changes were associated with high infiltration of mononuclear cells (Fig. 2 A). 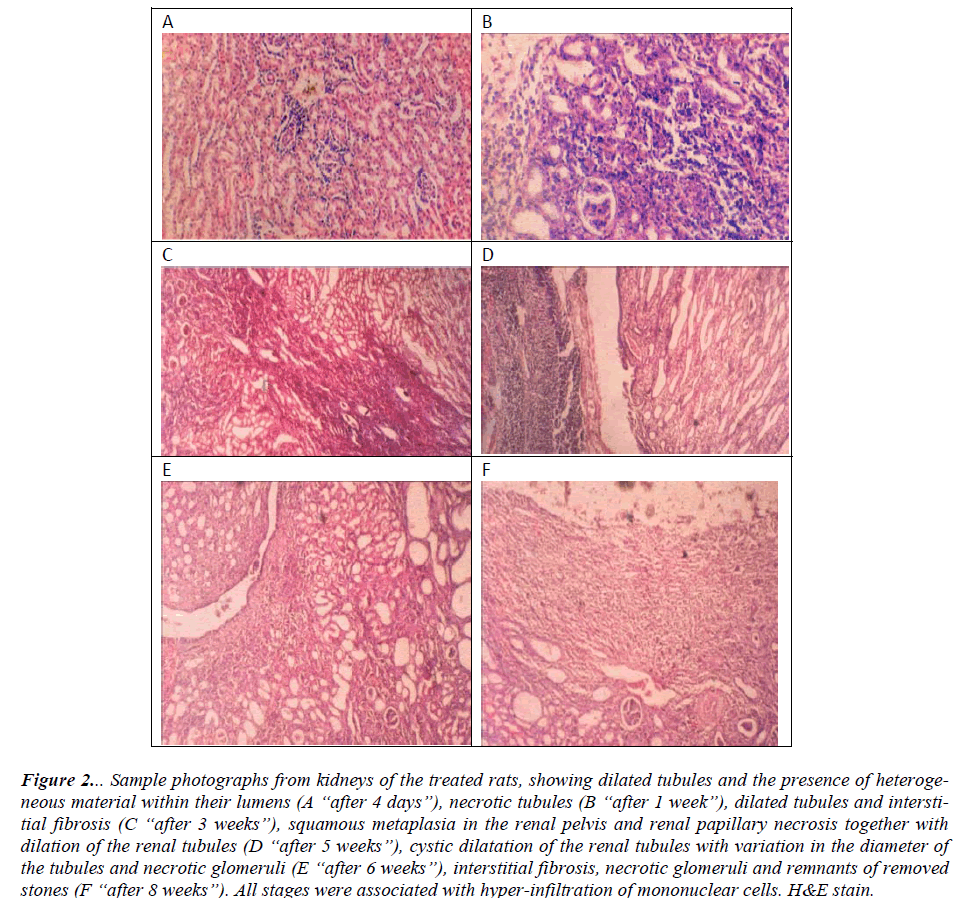 Figure 2: Sample photographs from kidneys of the treated rats, showing dilated tubules and the presence of heterogeneous material within their lumens (A “after 4 days”), necrotic tubules (B “after 1 week”), dilated tubules and interstitial fibrosis (C “after 3 weeks”), squamous metaplasia in the renal pelvis and renal papillary necrosis together with dilation of the renal tubules (D “after 5 weeks”), cystic dilatation of the renal tubules with variation in the diameter of the tubules and necrotic glomeruli (E “after 6 weeks”), interstitial fibrosis, necrotic glomeruli and remnants of removed stones (F “after 8 weeks”). All stages were associated with hyperinfiltration of mononuclear cells. H&E stain.

The histologic changes in the kidneys progressed over the 7day and increased throughout the period of the experiment. During the 1st week, cellular degeneration, with inflammatory cell infiltration of the cortex and medulla were obvious. Unorganized dilation of glomeruli and renal tubular necrosis due to accumulation of fibrotic material were observed (Fig. 2 B). At the 2nd and 3rd weeks, cell necrosis and coalescent suppurative were observed all over the kidneys. Chronic interstitial nephritis, which leads to some infarction foci, was developed (Fig. 2 C).

During the 4th to 6th weeks of the experiment, chronic pyelitis (Fig. 2 D) was encountered, with paplitis and squamous metaplasia which led to the atrophy of the convoluted and collecting tubules or cystic dilatation with distraction of glomeruli which consequently led to irregular dilatation in Bowman capsule (Fig. 2 E). The sever changes observed in the 4th, 5th and 6th weeks were maintained in the 7th and 8th weeks. In addition, more distraction appears in the kidney samples, due to high amount of lymphatic tissue precipitation. Thick lymphatic aggregation on the boundaries of the renal pelvis was also clear. The glomerular capsule was fibrotic and thickened. Kidney stones and infiltration of inflammatory cells were obvious (Fig. 2 F).

No significant histological changes were seen in the control rats.

Several procedures have been developed to study the pathophysiology of kidney damage and other aspects on the hostparasite relationship in the UTI using E. coli [16, 17], Ureaplasma urealyticum [7], P. mirabilis [9], and Pseudomonas aeruginosa [18]. To ensure a high frequency of pyelonephritic infection, most experimental models applied mechanical manipulations, such as bladder or kidney massage [19, 20], abdominal operation with temporary ureteral ligation or puncture of the kidney or bladder wall [21]. The present ascending UTI infection with P. mirabilis is employed without mechanical manipulation and with little trauma or injury to the urinary tract.

Mortality was reported in 16% of BALB/c mice intravesicularly administered with 2 × 108 CFU of P. mirabilis [22] and in 35% of CBA/J mice using transurethral administration of 109 CFU of P. mirabilis [5]. All of mice showed extensive and severe necrotizing pyelonephritis. However, renal calculi were not observed in the BALB/c mice but they were identified in the CBA/J mice. Mortality was also observed in 43.3% of dogs infected with E. coli; most of them showed chronic interstitial nephritis [23]. In the present study, no death was evident although proliferation of viable bacterial count was found to be associated with histologic changes in the kidney. The presence or absence of mortality has been attributed to the bacterial strain isolate from the human [5] or might be due to species difference in the susceptibility to infection.

We have reported [11] that P. mirabilis is capable of inducing chronic renal infection in the rat after a single reflux challenge. The Infection was accompanied by varying degrees of renal failure, increased blood urea nitrogen and serum creatinine and reduced level of creatinine clearance. Present study has been undertaken to describe the pathological changes that might occur in the kidneys of rats inoculated with P. mirabilis isolated from the urine of an Iraqi patient suffering from chronic UTI.

Two days after the inoculation of 0.5 ml of broth containing approximately 3×108 viable organisms, there was an incidence of pyelonephritis characterized by hyperemia and edema of the medullary areas associated with infiltration of the inflammatory cells. The pathological changes continued throughout the rest period of the experiment and developed into chronic pyelonephritis. The changes included interstitial inflammation, involving both cortex and medulla. The inflammatory changes were associated by infiltration mononuclear cell in the interstitium. The highest bacterial count in the present study was observed on the 4th day, this is consistent with the observation that a highest number of E. coli was recovered on the 3rd day of I.V. inoculation [20] and P. mirabilis on the 5th day of ascending inoculation [24]. This elevation in bacterial number might be the result of spread and extension of bacterial invasion towards the renal medulla and cortex.

The observed inflammation was more severe in the medulla than in the cortex, as infection continued, however, an increasing proportion of kidneys displayed cortical damage. The cortical region showed severe interstitial fibrosis and was found to be infiltrated with large number of mononuclear cells with marked tubular and glomerular destruction. The cortical inflammation suggesting that infection had spread from the medulla. Identical findings were evident in rats infected with Ureaplasma urealyticum [7]. The present study has also demonstrated the persistence of P. mirabilis in the rat kidneys during the entire period of experiment with a corresponding histologic evidence of chronic pyelonephritis. Bacterial invasion to the renal pelvis epithelium, the initial step in the renal infection is related to the poor blood circulation, higher concentration of urea, higher osmolality and lower PH all of which tend to impair phagocytosis and inhibit complement effect [25]. The bacterial count fell down significantly on the 2nd week. Niekel et al [26] and Brook et al [27] also found that the reduction in bacterial number (p. mirabilis and E.coli) was associated with domination of inflammatory cells in kidney tissues. The ability of P. mirabilis to colonize at the surface of the urinary tract is believed to be aided by characteristic known as swarming differentiation and migration [28]. Several potential virulence factors may be responsible for the pathogenicity of P. mirabilis such as flagella, urease, and hemolysin [14]. Fimbriae type I and Pfimbria have been reported to play a significant role in the infection induced by the E. coli [29-30]. E. coli bearing Dr fimbriae, was constructed and used to characterize persistence of infection and interstitial tropism in an experimental model of ascending pyelonephritis [16]. The swarming ability and other virulence factors of the P. mirabilis strains isolated from Iraqi patents with UTI to colonize the surface of urinary tract and induce chronic pyelonephritis need further investigation.

We are thankful to Professor Dr. Amar Chatterjee, Faculty of Medicine, University Teknolog MARA, Selangor, Malaysia for his valuable advice and helpful editorial effort in the preparation of this manuscript.