In this study, we developed and validated a High-Performance Liquid Chromatography-Tandem Mass Spectrometry (HPLC-MS/MS) method to determine bile acid in mouse serum. The serum samples were analysed after solid-phase extraction. The analytes were separated on a Diamonsil C18 column with a mobile phase of methanol and water containing 10 mmol/L ammonium acetate and 0.005% formic acid (70:30) at a flow rate of 0.5 mL/min. Analytes were detected by tandem mass spectrometry in negative ion mode. The results demonstrated that the calibration curve was linear for all bile acids over a range of 10-10000 ng/L. The specificity, matrix effect, recovery, linearity, accuracy, and precision were validated for bile acid in mouse serum. The HPLC/MS/MS method was selective, sensitive, and simple, and was applied successfully to determine the bile acid in more than 200 mouse serum samples. In conclusion, this method is suitable for the quantitative detection of bile acid.

Bile acid is the main lipid component of bile, which is derived from cholesterol in liver microsomes and transported actively into biliary by a secretory pathway [1].

Approximately, 95-98% of the bile acid is reabsorbed at the terminal ileum after entry into the small intestine and is transported back to the liver by portal vein, which forms the bile acid enterohepatic circulation [2]. Bile acid is associated with hepatobiliary diseases, gastrointestinal diseases, and other diseases that cause changes to bile acid metabolism [3-10]. Therefore, it is necessary to establish a simple, rapid, and effective analysis method to detect bile acids in an organism. However, this is difficult because of their complex nature and low concentration in biological fluids.

Currently, the classification and detection methods for bile acid mainly focus on High-Performance Liquid Chromatography (HPLC), Gas Chromatography/Mass Spectrometry (GC/MS), and High-Performance Liquid Chromatography-Tandem Mass Spectrometry (HPLC-MS/MS) [11]. For GC/MS, the bile acids to be treated via hydrolysis and derivation according to their category [12,13], and HPLC requires fluorescence derivation [14]. Meanwhile, while taurine-conjugated bile acid needs to derivatized after hydrolysis. However, HPLC-MS/MS does not need hydrolysis and derivation, and represents a relatively simple operating method to detect various types of bile acid in serum simultaneously, with advantages of speed, reproducibility, high separation efficiency, and sensitivity. In the present study, we aimed to develop an HPLC-MS/MS method to determine bile acids. The developed method has the advantage of a quick and easy-to-use sample preparation and clean-up without further complex derivatization techniques, and was applied successfully to determine the bile acids in more than 200 mouse serum samples.

The CA-d4 standard was weighed accurately and dissolved in anhydrous methanol at 1 μg/ml as an internal standard solution.

Normal mouse serum was extracted and mixed with 100 mg/ml of activated carbon by gentle rocking. The mixture was shocked mildly and kept at room temperature overnight (around 17 h), before being centrifuged at 19,500 rpm for 1 h. The supernatant was filtered to a clean tube through a 0.22 μm membrane (MCM, Agela technologies Co.). The blank serum sample was then tested immediately, or stored at -70°C [12].

Mouse serum samples (200 μL) were mixed with 50 μL of 1 μg/ml internal standard solution and 1 ml of 0.05% formic acid. After mixing thoroughly by vortexing for 2 min, the mixture was loaded onto an HLB Cartridge extraction column (Waters Co.), which had been pre-conditioned with 1 ml of methanol and 1 ml of 0.05% formic acid. The cartridge was subsequently washed with 1 mL of water and 1 ml of 5% methanol. The bile acids were eluted with 1 ml of methanol and 2 ml of acetonitrile. The eluent was dried at 60°C under a nitrogen stream, and the residue was dissolved in 100 μL of 90% methanol. After vortexing for 1 min to mix well, followed by 1 min of ultrasonication, 10 μL of the sample was injected into the HPLC-MS/MS system.

The blank serum (a) and bile acid standard solution (b) were injected separately into the HPLC-MS/MS system for analysis.

Preparation of the standard curve

To prepare different concentrations of 10, 25, 50, 100, 200, 500, 1000, 10000 ng/ml bile acid serum samples, the appropriate amount of standard solution was dried with nitrogen and dissolved in 200 μL of mouse blank serum. Following the “sample processing” operation, five samples were analysed for each concentration. The bile acid concentration (x) was set as the abscissa, and the bile acid and internal standard peak area ratio (y) was set as the ordinate, and were used in a computing weighted (W=1/x2) least squares method to establish the standard curve.

The results showed that each of the analytes had no other interfering peak impurities, and the reservation times were TCA, 4.18 min; β-MCA, 4.82 min; CA, 6.09 min; UDCA, 5.36 min; DCA, 8.76 min; and LCA, 12.96 min (Figure 1). The blank serum processed by activated carbon had no significant endogenous impurities that interfered at the peak position of six bile acid standards; therefore, the method had good specificity. 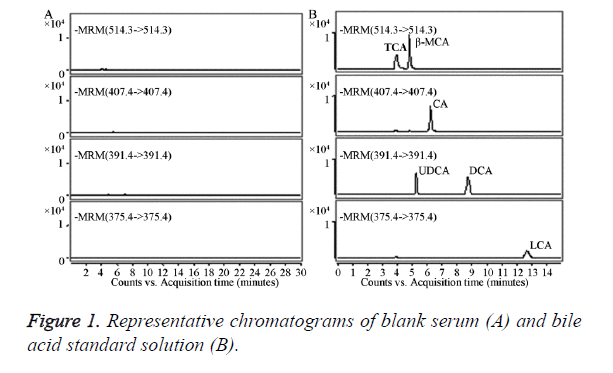 Figure 1. Representative chromatograms of blank serum (A) and bile acid standard solution (B).

The bile acid standard curves and correlation coefficients are shown in in Table 1. The results showed the detection of all the bile acids was linear within the range of 10-10000 ng/ml.

Table 1. The calibration curve of all the bile acids.

The results in Table 2 showed that the blank serum processed by activated carbon could be used as a standard for the blank matrix, and produced no significant matrix effect.

Table 3. The precision and recovery of all the bile acids.

Forty mouse serum samples were analysed using the established method. The bile acids that needed to be determined were completely separated within 20 min; the performance of the method was adequate and stable. Representative results from a normal mouse are shown in Figure 2: TCA 96.25 ng/ml, β-MCA 115.95 ng/ml, UDCA 88.12 ng/ml, DCA 9.02 ng/ml, CA 3.31 ng/ml, and LCA 3.21 ng/ml. 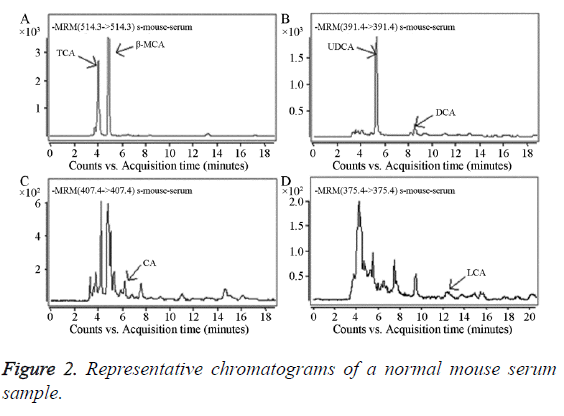 According to reference [15], most HPLC/MS/MS determination methods for bile acid use the gradient elution method. In this experiment, the mobile phase was methanol-water containing 10 mmol/L ammonium acetate and 0.005% formic acid (70:30), which achieved good separation. The MS analysis used an AP-ESI ion source, negative ions, and Multiple Reaction Monitoring (MRM) modes. However, there was no obviously enhanced response using different collision energies to detect the ion pairs; therefore, 0 eV was chosen as the collision energy. Agilent and Waters column extractors were used in this experiment. The Agilent column showed lower recovery than the Waters HLB Cartridge column did; therefore, the latter was chosen. After the extract was dried by a nitrogen stream, it was dissolved in the mobile phase; however, the peak from β-MCA was not good. This was resolved using a 90% methanol solution, which produced a good peak for β-MCA.

The developed method had good specificity, and the bile acids were detected in a linear manner within a range of 10-10000 ng/L. The inter-day and intra-day RSDs were all below 12%, the average extraction recovery of each ingredient was 50-90%, and the average relative recovery was 90-115%. Therefore, this method is sensitive, specific, and simple, and showed good reproducibility, with a short analysis time and wide linear range. Therefore, we believe that this HPLC-MS/ MS is suitable for the quantitative detection of mouse serum bile acids in scientific research.