In this study, the effects of high Trans Fatty Acid (TFA) intake on fatty acid contents in erythrocyte membranes were examined. Thirty-two rabbits were randomly divided into 4 groups: a control group fed a common diet, a high TFA group fed a normal diet supplemented with 5.0 g/kg/d TFA, a High-Fat (HF) group fed a high cholesterol diet, and a TFA+HF group. Saturated FAs, unsaturated FAs and TFA contents of erythrocyte membranes were determined at 0, 4, 8 and 12 weeks. We found that the TFA and saturated FA contents in erythrocyte membranes were significantly higher in the TFA group than in the control group, but ω-3 FAs were lower after 12 weeks. The ω-3/ΣTFA and ω-3/C18:0 ratios were also significantly lower in the TFA group than the control group. The ratios were similar in the HF group and the TFA group. In the TFA+HF group, the abnormalities in the FA ratios in the erythrocyte membrane were more obvious. High TFA intake could decrease polyunsaturated fatty acids in the erythrocyte membrane, especially ω-3 fatty acids, and decrease the ratios of ω-3 to TFA and saturated fatty acids. The effects of high cholesterol intake were equivalent to the effects of high TFA intake. Synergistic effects were clearly observed after combined TFA and high cholesterol intake.

For a long time, research on the relationship between lipids and atherosclerosis focused on saturated FAs. Recently, the deleterious effects of Trans Fatty Acids (TFA) and the benefits of ω-FA on the cardiovascular system have attracted much attention [4]. Epidemiological studies have demonstrated that TFA intake is positively correlated with ischemic heart disease and sudden cardiac death [5]. It is currently accepted that TFA is a strong atherogenic factor [6-8].

Water was provided ad libitum. The guidelines for the ethical care and treatment of animals from the Ministry of Science and Technology of China PR were strictly followed. This study was conducted in accordance with the declaration of Helsinki.

This study was conducted with approval from the Ethics Committee of the Second Affiliated Hospital of Nanchang University (No. 201402142036).

Fasting blood samples were collected before (0) and at 4, 8, and 12 weeks after dietary intervention. The separated red blood cells were treated by hypotonic haemolysis, and the extracted erythrocyte membranes were stored in liquid nitrogen freezers at -130°C for the fatty acid analysis.

A statistical analysis was performed using the SPSS13.0 software package. All data are expressed as means ± standard deviation (SD). ANOVA was used to compare FA and TFA levels in erythrocyte membranes among groups. A value of P<0.05 was considered statistically significant.

At baseline, similar relative contents of the six FAs and ω-3 were found among the four groups. At week 12, the relative ω-3 FA content was significantly lower in the TFA group than in the control group.

Furthermore, the percentage of FAs that were ω-3 was the lowest in the TFA+HF group (Figure 1). The relative C18:0 content increased and C20:4 and C20:5 decreased in the three interventional groups. 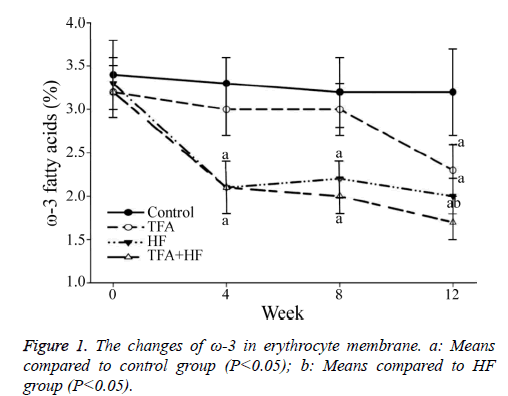 However, the C16:0, C18:1 and C18:2 contents in the three interventional groups did not change significantly during the 12-week period (Table 1).

Table 1: The percentages of CFA in erythrocyte membrane (%).

The percentages of TFA

At week 4, the percentages of TFAs that were T-C16:1 and T-C18: 1 and the total TFA content were significantly higher in the three intervention groups than in the control group.

Table 2: The percentages of TFA in erythrocyte membrane (%).

Compared to the control group, the TFA group not only had a significantly lower ω-3/Σ-TFA ratio, but also a lower ω-3/ C18:0 ratio at the 3 time points. The ω-3/Σ-TFA curves of the TFA and HF groups were similar. In the TFA+HF group, the abnormalities in the 2 ratios were the most obvious between the three intervention groups and the control group (Figure 3). 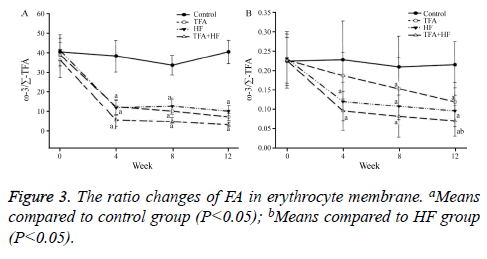 Normal lipid content is important for maintaining the normal functions of cells. We know that mature erythrocytes have no nuclei. So erythrocyte membrane was used in some researches to evaluate FA contents in the cell membrane. They have confirmed that abnormal FA contents in erythrocyte membranes, especially abnormalities in TFA and ω-FA, are related to many health problems [3,4,12]. Additionally, ω-3 FA has cardiovascular protective effects; low ω-3 FA intake increases the incidence of arrhythmia and coronary heart disease [3,9]. Some studies have demonstrated that the amount of ω-6/ω-3 in the erythrocyte membrane is negatively correlated with coronary heart disease [13,14].

At present, TFA is a focus of health care. It is widely accepted that high TFA intake increases the risk of coronary death, fatal arrhythmia, and other cardiovascular diseases. Some studies have demonstrated that patients with a higher t-C18:1 content in the erythrocyte membrane have a higher risk of sudden cardiac death [12,15]. Additionally, TFA-induced damage to the cardiovascular system is stronger than damage induced by saturated Fats [15].

Our results showed that high TFA intake not only increases the TFA content in the erythrocyte membrane, but also increases percentage of FAs that are saturated FAs (C18:0). Additionally, a high TFA intake significantly decreased the percentage of FAs that are ω-3 FAs and other unsaturated FAs, especially C20:5. The magnitude of the decrease in unsaturated FAs was similar to that observed after high cholesterol intake. These changes induced significant abnormalities in the relative contents of several FAs in the erythrocyte membrane, such as decreases in the ω-3/C18:0 and C18:1/C18:0 ratios. Abnormal FA ratios may reflect content and functional abnormalities of the cell membrane.

These results also indicated that the abnormal FA contents in the erythrocyte membrane induced by high TFA intake were similar to those induced by high cholesterol intake, particularly the decreases in ω-3 FA and poly-unsaturated FAs.

It is still unclear why a high TFA intake decreases polyunsaturated FAs, especially ω-3 FA, in the erythrocyte membrane. The spatial structure of TFA may be a factor. TFA has a linear spatial structure similar to that of saturated FAs, while the ω-3 FA molecule is bent. A larger repulsive force may exist between TFA and ω-3 FA molecules with different spatial structures and this repulsive force may remove ω-3 FA from the cell membrane, and decrease the ω-3 FA content, but not saturated FA. Another potential mechanism is that TFA may lead to dyslipidaemia by affecting the liver X receptor, cholesterol ester transfer protein, and sterol regulatory element binding protein-1. However, the specific mechanisms are still unknown and worth investigating in future studies.

This study was supported by a grant from the Education Research Plan of Jiangxi Provincial Department (GJJ13043).

I would like to express my gratitude to all those who have helped me in this work. Especially, I would like to thank Huang Bo and Li Zheng, who kindly gave me a hand during the writing of this paper.