Aims: To describe the characteristics of febrile UTI in hospitalized infants and to characterize the uropathogens distribution and antimicrobial resistance rates.

Methods: Retrospective study performed during 2010-2013, including all infants <3 months of age admitted with the diagnosis of UTI proven by urine culture obtained by bladder catheterization.

Conclusion: The high resistance rates to major antibiotic classes of uropathogens isolated in hospitalized infants with UTI require close periodically monitoring and may require modification of empirical antibiotic therapies in use for these patients.

Urinary tract infection (UTI) represents one of the most common bacterial infections in children and one of the main reasons for fever and antibiotic prescriptions. The incidence of the disease reaches 3% in neonates and is around 0.7% in infants up to 1 year of age [1-4]. The prevalence of UTI in febrile infants is around 5% [5-7]. Gram-negative bacteria represent the most common etiologic cause of this condition and, among them, the most frequently isolated is Escherichia coli, causing up to 70-90% of all UTIs [1-4]. Other causative bacteria are Proteus spp. (mostly commonly encountered in boys <1 year of life), Enterobacter spp. and Klebsiella spp. Of the Gram-positive bacteria, Enterococcus fecalis is the most commonly isolated pathogen. UTI must be taken into consideration when young infants are examined for fever because it could be a serious condition with almost one-third of cases having associated bacteremia [1-4].

Diagnosis of UTI is of major importance, particularly in children, because this infection may represent, potentially, the first and only sign of a congenital defect of the urinary tract. Early diagnosis and treatment will prevent complications such as renal scarring, deteriorating renal function and hypertension, especially in young infants and children <5 years of age [4-7]. Approximately 30% to 50% of young infants with UTI may have urinary tract abnormalities, of which vesicoureteral reflux (VUR) is the most common. The clinical diagnostic and treatment approach in UTI were summarized in clinical guidelines published by the American Academy of Pediatrics and several other national forums with minor changes [8-11]. The last guidelines published in 2011 consider that performance of voiding cystourethrography (VCUG) is not recommended anymore in the investigation of a first UTI episode and that early antimicrobial treatment may decrease the risk of renal damage for UTI [9-11].

Diagnosis is made on the basis of the presence of both pyuria and at least 50 000 colonies/ml of a single uropathogenic organism in an appropriately collected specimen of urine [9-11]. After 7-14 days of antimicrobial treatment, close clinical follow-up monitoring should be maintained to permit prompt diagnosis and treatment of recurrent infections. Ultrasonography of the kidneys and bladder should be performed to detect anatomic abnormalities. Today, the need for all or part of blood and imaging investigations is controversial, especially in infants who already had their urinary tract investigated by US during pregnancy [9-11].

To ensure appropriate treatment, knowledge of the pathogens causing UTI and their antibiotic susceptibility is mandatory. In recent years, an increasing proportion of uropathogens are resistant to antibiotics, with increasing numbers of failures in treatment after empiric therapy recommended by national and international guidelines for children [12,13].

We performed a retrospective study whose specific purposes were to describe the characteristics of first UTI episodes diagnosed in 0-3-month-old infants as part of a systematic screening for UTI in children seen in the emergency department and subsequently hospitalized, to characterize the distribution of uropathogens and antimicrobial resistance rates as function of patient age and gender and to evaluate the antibiotic treatment policy at our medical center.

This retrospective study was performed during 2010-2013 and included all the infants <3 months of age admitted to the pediatric department 1A of the Children’s Hospital (which admits all non-surgical infants <3 months of age hospitalized in the hospital) with the diagnosis of UTI proven by urine culture. Our hospital is the only primary and tertiary medical center in the city of Brasov (located in Central Romania) and takes care of a population of approximately 300,000 patients (of them around 100,000 children).

Diagnosis of UTI was made on the basis of the presence of at least 50.000 colonies/ml of a single uropathogenic organism in a specimen of urine obtained by bladder catheterization. The medical records of the admitted infants, laboratory findings from the bacteriological laboratory and imaging data from the radiology department were searched. Age, sex and ethnicity of the infants with UTI were documented. The departmental protocol for the initial empiric treatment of infants with suspicion of UTI included 1) ampicillin (100 mg/kg/day three times/day plus gentamicin (5 mg/kg/day once/day) or 2) cefuroxime (100 mg/kg/day three times/day) or 3) ceftriaxone 50 mg/kg/day once/day). The intravenous antibiotic treatment was continued for a minimum of 7 days and changed to an oral antibiotic (cephalexin 50 mg/kg three times/day in most cases) for 3-7 additional days, summarizing a total of 10-14 days of antibiotic therapy. Anatomical abnormalities diagnosed during the first episode of UTI were documented as well as all imaging finding completed during the hospitalization. The departmental policy required the performance of a follow-up urine culture at discharge. The antibiotic prophylaxis policy was not well defined at the pediatric department during the study period, leaving at the physicians' decision the specific antibiotic to be administered. However, the local guidelines recommended antibiotic prophylaxis for all infants <3 months of age with first UTI episodes until the completion of imaging studies. The recommended imaging studies during the study period included the completion of an ultrasound (US) examination during hospitalization or after hospitalization in all cases of infants <3 months of age with UTI. Additional investigations, like VCUG and Technetium- Dimercaptosuccinic (DMSA) scan were performed according to nephrologist’s recommendations.

The study was approved by the ethics committee of the hospital.

One hundred and seven (91.5%) young infants with UTI did not suffer from any previous pathologic conditions. The remaining 10 (8.5%) were diagnosed with various anomalies, of them 7 (6.0%) with renal anomalies (5 hydronephrosis, 1 polycystic kidney and 1 congenital megaurether), 1 atrial septal defect, 1 ventricular septal defect and 1 with milk allergy. Concomitant pathologies (conditions) were diagnosed at the time of UTI diagnosis in 69 (59.0%) patients with UTI, of them acute gastroenteritis, bronchiolitis, dehydration and pneumonia in 22 (18.8%), 14 (12.0%), 11 (9.4%) and 6 (5.1%) cases.

Fever>38°C at admission was recorded in 33 (28.2%) (Table 1). None of the infants was hypothermic at admission. Leukocytosis, leukopenia and neutropenia were recorded in 20 (17.1%), 2 (1.7%) and 5 (4.3%) patients, respectively. CRP was determined in 73 (62.4 %) patients and was abnormal in 42.5% of them. Renal ultrasound was performed during hospitalization in all patients and confirmed the previously diagnosed renal pathologies in all 7 cases; an additional patient was found with hydronephrosis. 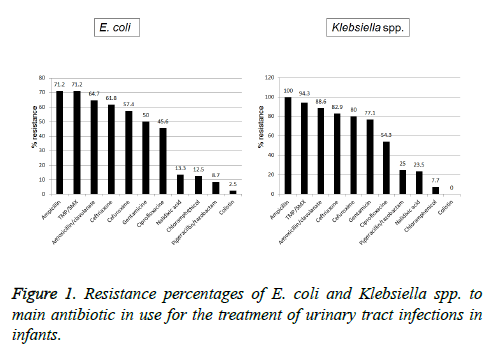 Figure 1: Resistance percentages of E. coli and Klebsiella spp. to main antibiotic in use for the treatment of urinary tract infections in infants.

All 5 Proteus spp. tested were nonsusceptible to ampicillin, TMP/SMX, gentamicin and chloramphenicol and susceptible to cefuroxime, ceftriaxone and nalidixic acid.

The purpose of the present study was: 1) To describe in detail the first UTI episode in infants <3 months of age, in order to determine its demographic, epidemiologic, microbiological and therapeutic characteristics; 2) To describe the antibiotic susceptibility patterns of the major uropathogens isolated during the study period; and 3) To discuss the local antibiotic treatment policies for the treatment of UTI in young infants in the perspective of local microbiological data and medical literature recommendations.

The pediatric division of the Brasov Children’s Clinic Hospital admitted during each year of the study period around 30 young infants <3 months of age with the diagnosis of UTI. We found that: 1. UTI prevalence was high (12%) and E. coli and Klebsiella spp. were the main uropathogens isolated, without significant differences between patient gender and age subgroups; 2. UTI in the study population was characterized by low percentages of febrile infants at admission, absence of urosepsis, low percentage of leukocytosis or neutropenia in the peripheral blood counts and normal renal ultrasound examinations; 3. Very high resistance rates to 2nd and 3d generation cephalosporins, ciprofloxacin and gentamicin were recorded among the E. coli and Klebsiella spp. isolates, while piperacillin/tazobactam, meropenem, nalidixic acid, chlomphenicol and colistin retained good susceptibility rates.

Antibiotic treatment is the cornerstone of treatment for acute urinary tract infections and is important for preventing parenchymal localization of the infection [1,3,4,8-10]. When intravenous treatment is required, no particular antibiotic has been shown to be superior; cephalosporins and aminoglycosides are frequently recommended [1,3,4,9]. Bracy et al. summarized in 2016, in a systematic review and metaanalysis, 58 observational studies investigating the prevalence of antibiotic resistance among 77783 E. coli isolates in UTIs in children in primary care stratified by the OECD (Organization for Economic Co-operation and Development) [14] . In studies from industrialized countries, the pooled prevalence of resistance was 53.4% (95% confidence interval 46.0% to 60.8%) for ampicillin, 23.6% (13.9% to 32.3%) for trimethoprim, 8.2% (7.9% to 9.6%) for co-amoxiclav, and 2.1% (0.8 to 4.4%) for ciprofloxacin, while nitrofurantoin was the lowest at 1.3% (0.8% to 1.7%). Resistance in studies in among children in developing nations was significantly higher: 79.8% (73.0% to 87.7%) for ampicillin, 60.3% (40.9% to 79.0%) for co-amoxiclav, 26.8% (11.1% to 43.0%) for ciprofloxacin and 17.0% (9.8% to 24.2%) for nitrofurantoin. Bacterial isolates from the urinary tract from individual children who had received previous prescriptions for antibiotics in primary care were more likely to be resistant to antibiotics, and this increased risk could persist for up to six months [14]. Several studies performed around the world in pediatric patients emphasize an increasing rate of resistance of the main UTI pathogens (E. coli and Klebsiella spp.) to oral antibiotics prescribed as first-line of therapy in communityacquired disease (like amoxicillin, TMP/SMX and amoxicillin/ clavulanate) and, in lower percentages, oral cephalosporins, gentamicin and ciprofloxacin [12-19]. Furthermore, the prevalence of urinary tract infections caused by extensivespectrum β lactamase (ESBL)-producing organisms (particularly E. coli and Klebsiella spp.) is in continuous increase [15,20-22].

Information on antibiotic resistance patterns of Gram-negative organisms in Romania is limited. According to the European Union reports, 22% of E. coli strains analyzed from Romania are resistant to 3rd generation cephalosporins (10.9% being multiple-drug resistant), while 44% of K. pneumoniae strains were resistant were resistant to 3rd generation cephalosporins (30% exhibiting multiple-drug resistance) [23]. Recently, a microarray experimental model was used to detect the expression of 31 antimicrobial resistance genes of 75 ESBL producing-E coli and 66 ESBL producing-K. pneumoniae isolates obtained from clinical samples (both community and hospital-acquired) in Western Romania [24]. The authors reported that all hospital-acquired and 54% of community acquired E. coli strains had at least one resistance gene to 3rd generation cephalosporins, while the respective figures for K. pneumoniae were 81% and 6%, respectively [24]. We showed, in the present study, that the prevalence of resistance of E. coli and Klebsiella spp. to commonly prescribed intravenous antibiotics and the emergence of ESBL in hospitalized young infants diagnosed with UTI in Brasov, Central Romania, were extremely high and of extreme concern. The possible explanations reside, most probably, in the excessive therapeutic overuse and abuse of antibiotic drugs, at the community and at the hospital level as well, rending many antibiotics ineffective, at least as first line treatments for urinary tract infection.

The limitations of the present study are related, obviously, to its retrospective nature, which may have caused to some missing or inexact information in the data collection from the medical and laboratory charts. The fact that the number of febrile infants with UTI was relatively low (28.2% of all enrolled patients) may be explained by the presentation of body temperature values recorded at admission only, possibly after administration of antipyretics at home or during transportation to the PER. Another limitation is related to the relatively small number of tests performed for intravenous broad-spectrum antibiotics (like piperacillin/tazobactam or meropenem) and amikacin, not allowing a definitive picture for the susceptibility patterns of these antibiotics which may be needed as possible replacers for the empiric first-liners like ampicillin, gentamicin, amoxicillin/clavulanate or cefuroxime.

In conclusion, the resistance to antibiotics of E. coli and Klebsiella spp., the main uropathogens recovered in young infants with UTI in our hospital, was extremely high and reflects an important public health in the whole country. Facing this concerning situation, implementing close monitoring and rotating antibiotic drugs protocols together with a policy of modifying or changing the existing empiric antibiotic treatment protocols according to available epidemiologic local information, may represent logical and efficacious solutions.