Histone modifications, especially histone acetylation and methylation, are important for gene expression regulation in diabetic nephropathy. However, the general epigenetic changes in mesangial cells have not been characterized. We examined Histone Deacetylases (HDACs) and Histone Methyltransferases (HMTs), representative histone-modifying enzymes, during transient and persistent stimulation with High Glucose (HG) in Rat Mesangial Cells (RMCs). RMCs were incubated with 5.5 or 30 mmol/L Dglucose and were divided into 4 groups according to glucose stimulation over 24 h periods: group 1, no HG; group 2, initial HG followed by Low Glucose (LG); group 3, alternative HG and LG; group 4, persistent HG. The mRNA levels of interleukin (IL)-6 and IL1β were significantly higher in group 4 than group 1, indicating that transient and persistent exposure to HG could induce an inflammatory response. Both classes I (HDAC2, 3, 8) and II (HDAC4, 5) HDACs decreased as exposure to HG increased, and this decrease was particularly strong for HDAC2. However, class III HDAC levels did not differ among groups. Sirt1, 2, and 3 differed only slightly among groups. Mixed Lineage Leukaemia (MLL) 1, MLL2, and MLL3 were not affected by HG exposure, but other HMTs, e.g. G9a, Setdb1, and Suv39h1, showed a decrease. In conclusion, transient or persistent HG stimulation induced changes in inflammatory and histone-modifying deacetylase and methyltransferase in RMCs. These results suggested that HG decreased classes I and II HDACs and repressive HMTs, which could upregulates gene expression in RMCs.

RMCs were obtained by isolating glomeruli from the kidneys of male Sprague-Dawley rats by conventional sieving methods as previously described [14]. Briefly, RMCs were cultured in Dulbecco’s modified Eagle’s medium (Gibco, Waltham, MA, USA) containing 20% foetal bovine serum, 100 U/ml penicillin, 100 μg/ml streptomycin, 44 mmol/L NaHCO3, and 14 mmol/L N-2-hydroxy-ethylpiperazine-N’-2-ethane sulfonic acid, at 37°C in a humidified atmosphere of 95% air and 5% CO2. Subconfluent cells were cultured in 0.1% foetal bovine serum for 24 h before the experiments. The cells were then incubated with 5.5 or 30 mmol/L D-glucose. The cells were divided into 4 groups according to the pattern of stimulation with HG every 24 h for 4 d as follows: group 1, no HG; group 2, initial HG followed by Low Glucose (LG); group 3, alternative HG and LG; group 4, persistent HG. Cells were cultured in triplicate and harvested at 96 h for the extraction of total RNA. All experiments were performed using cells between the 6th and 8th passages.

Representative molecules were selected to examine histone changes. Eight HDACs, including HDAC2, 3 and 8 for class I, HDAC4 and 5 for class IIA, and Sirt 1-3 for class III HDACs, were examined. Six HMTs were examined. H3K4me is typically associated with gene activation and can be mediated by several HMTs, such as SET1, MLL1-4 (mixed lineage leukaemia 1-4), and SET7/9. H3K9me, on the other hand, is generally associated with gene repression and can be mediated by SUV39H1 (Suppressor of variegation 3-9 homolog 1), G9a, and SETDB1/ESET (SET domain, bifurcated 1/ERGassociated protein with SET domain) [15,16]. MLL 1-3 were examined for H3K4me and G9a, Setdb1, and Suv39h1 were examined for H3K9me.

Inflammatory changes were evaluated based on the gene expression levels of Interleukin (IL)-6 and IL1β.

The qRT-PCR was applied in the Applied Biosystems (StepOnePlus Real-Time PCR) from Thermo Fisher Scientific using the Power SYBRTM Green PCR Mater Mix kit. PCRgrade water was used as a negative control. GAPDH was used as the internal control to calculate the relative expression quantity of the objective genes in each sample, respectively.

We used non-parametric analysis because most of the variables were not normally distributed even after logarithmic transformation. The Mann-Whitney U test was used to compare differences between two groups. Statistical significance was defined as p value<0.05. All statistical analyses were performed using SPSS version 10.0 (SPSS Inc., Chicago, IL, USA). Data have been expressed as mean ± standard deviation. 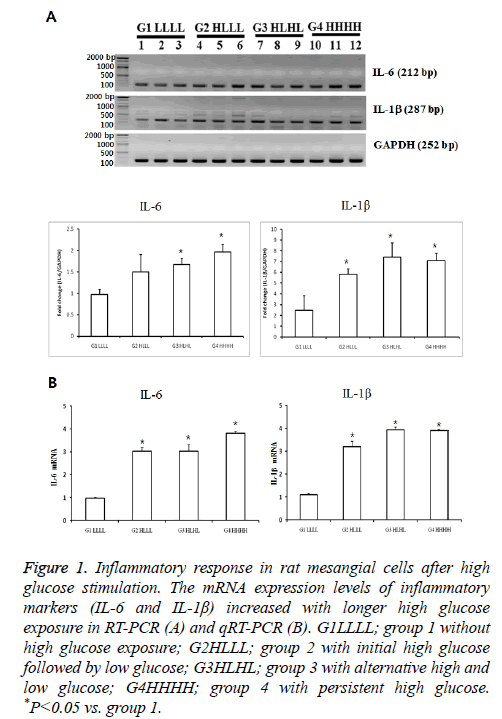 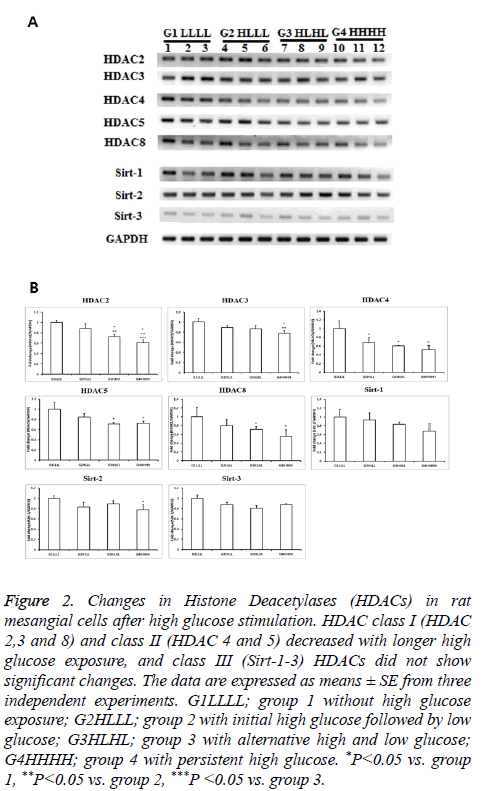 Although mRNA expression levels of MLL1-3 were not influenced by HG, the expression of other HMTs, such as G9a, Setdb1, and Suv39h1 decreased. 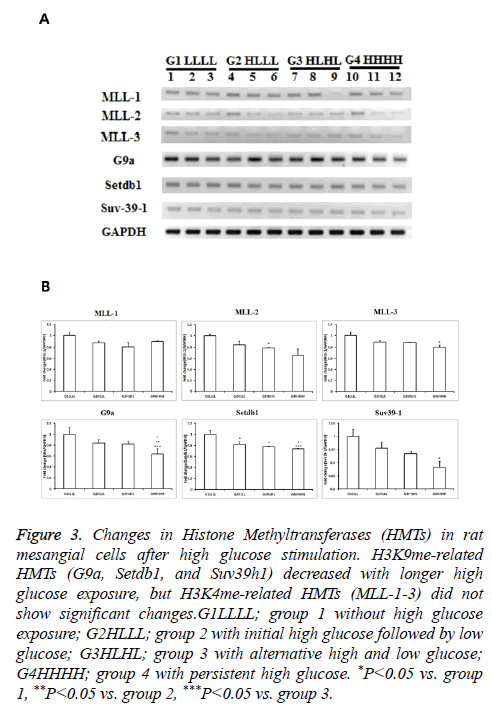 Transient or persistent HG stimulation induced changes in inflammatory genes and HDACs and HMTs in RMCs. Both classes I and II HDACs showed similar responses to HG, i.e. as HG exposure increased, the expression of classes I and II HDACs decreased. Their expression levels decreased further in response to sustained HG stimulation. Class III HDACs were not significantly influenced by HG.

Histone acetylation activates gene transcription in diabetic kidney models. HG induces genome-wide histone hyperacetylation in mesangial cells [18], including H3K9/14 hyperacetylation in approximately 5000 promoters of profibrotic genes, such as Tgfb1 and Ctgf, in glomerular mesangial cells [18]. These pro-fibrotic factors were further enhanced by an HDAC inhibitor, but were suppressed by an HAT inhibitor, confirming the importance of histone acetylation [18]. Increased PAI-1 and p21 expression levels are also associated with elevated promoter H3K9/14Ac levels in glomeruli of diabetic mice [19]. Conversely, the overexpression of HDAC1 and HDAC5 attenuates their expression [19].

However, contradictory results have been obtained. HDAC2, 4 and 5 were upregulated in streptozotocin-induced diabetic nephropathy, db/db mouse models, and diabetic patient kidney biopsies [20,21]. HDAC-2 mediated extracellular matrix accumulation and epithelial-to-mesenchymal transition in the diabetic kidney and in TGF-β1-treated epithelial cells [22,23]. HDAC inhibitors, including Trichostatin A (TSA), have been reported to attenuate diabetic nephropathy [24-26]. Yoshikawa et al. also reported that an HDAC inhibitor suppressed TGF-1β-induced epithelial-to-mesenchymal transition in human renal proximal tubular epithelial cells [27]. An HDAC inhibitor did not directly affect TGF-1β, but TSA inhibited TGF-β-induced epithelial-to-mesenchymal transition. This effect of the HDAC inhibitor was explained by the upregulation of histone acetylation by inhibitors of DNA binding/differentiation 2 and bone morphologic protein 7 [27]. In our study, HG reduced the expression of classes I and II HDACs, but not class III HDACs, in RMCs. Therefore, genespecific histone modification is important, even though histone lysine acetylation is generally associated with gene activation and HDACs have opposing functions.

Recently, HDAC inhibitors have been identified as promising drugs for the treatment of several diseases, including diabetic nephropathy. However, several reports have indicated that epigenetic regulation, including the effects of HDAC inhibitors, could be cell- and gene-specific. Initially, Cai et al. reported that glucose stimulates osteopontin expression and this expression is inhibited by an HMT inhibitor, but not by an HDAC inhibitor. The HDAC inhibitor even increased the expression of Spp1, an osteopontin gene [28]. Second, TSA, in general, can induce histone hyperacetylation to increase gene expression. However, TGF-β1 target genes vary. TSA inhibited TGF-1-induced fibronectin and Col1a2 by inhibition of Sp1 recruitment at the Col1a2 promoter. However, it increased Ecadherin by increasing histone acetylation [26]. These differences suggested that the effects of HDACs are genespecific, and both histone and non-histone-dependent mechanisms are involved. Third, the effects of renoprotective drugs are histone-modifying enzyme-specific. Reddy et al. reported that losartan inhibits H3K9/14Ac and H3K36me3 at receptor for advanced glycation end products (RAGE) and plasminogen activator inhibitor-1 (PAI-1), respectively. However, losartan does not change the decreased H3K9me2, H3K9me3, and H3K27me3 marks at RAGE and PAI-1 genes. Additionally, losartan dose not influence histone changes at MCP-1, which is associated with the pathogenesis of diabetic nephropathy [29].

Histone changes relating to histone methylation are very complicated. Gene expression depends on the type and location of lysine methylation. Up-regulation of H3K4me1/2/3 marks contributes to increased gene expression in diabetic nephropathy [30-32]. Inflammatory gene activation is also related to a loss of repressive marks, such as H3K9me, in inflammatory genes, such as IL-6 and MCP-1, in diabetic vascular smooth muscle cells. This loss of repressive H3K9me3 in db/db vascular smooth muscle cells is associated with decreased protein levels of Suv39h1, a known HMT that mediates H3K9me3, and is associated with repressed states of chromatin [33]. In our study, H3K4me-related HMTs, such as MLL1-3, were not influenced by HG. However, H3k9merelated HMTs, such as G9a, Setdb1, and Suv39h1, were significantly downregulated in HG-induced RMCs, even after early transient HG exposure, which could decrease repressive marks, e.g. H3K9me.

Various efforts to block inflammatory reactions have not been effective in diabetic nephropathy. The control of epigenetic changes is a promising option to manage diabetic nephropathy. In diabetes, oxidized low-density lipoprotein and endoplasmic reticulum increase the protein levels of SET7, a H3K4me HMT, and promote its nuclear translocation and enrichment at profibrotic gene promoters [32,34]. The overexpression of Suv39h1 in vascular smooth muscle cells partially reversed inflammatory gene expression in diabetic db/db mice [33]. Our results showed that changes in inflammatory cytokines corresponded to the downregulation of class I and II HDACs and repressive HMTs.

El-Osta et al. showed that transient exposure to hyperglycaemia causes persistent epigenetic changes in the promoter of nuclear factor κB in endothelial cells [10]. The DCCT showed that early exposure to hyperglycaemia prolongs negative effects, including diabetic complications, during subsequent periods of improved glycaemia [9]. Transient ischemia also decreased histone acetylation. An initial decrease in HAT activity occurred in the ischemic period, followed by the downregulation of HDAC5, partially contributing to histone reacetylation and BMP7 induction in the recovery period [35]. Histone methylation is a dynamic process. Lysine demethylase 1 specifically removes H3K4me marks [36] and is subsequently able to remove H3K9me [36]. These results showed that transient changes in conditions can result in epigenetic changes.

This work was supported by the National Research Foundation of Korea Grant funded by the Korean Government (NRF-2010-013-E00009) and the Inje Research and Scholarship Foundation in 2010.

All authors declare no conflict of interest.