Hemophagocytic lymphohistiocytosis is a syndrome which could be life threatening, especially when it occurs in a patient with a hematological malignancy found during chemotherapy. This is the first published case of an acute promyelocytic leukemia patient with an atypical manifestation of a hemophagocytic lymphohistiocytosis (with elements that could mimic a differentiation syndrome), who later has developed Clostridium difficile colitis. We discussed the diagnosis difficulties related to overlapping of clinical and laboratory manifestations of the first two entities and the pathogenic connections between those and the appearance of Clostridium difficile colitis. These three diseases responded well to the treatment. Early recognition and treatment of both acute promyelocytic leukemia and hemophagocytic lymphohistiocytosis are essential for patient survival. Clostridium difficile colitis should be suspected whenever there are risk factors for it, including etoposide treatment.

Hemophagocytic lymphohistiocytosis (HLH) is a rare syndrome due to an uncontrolled immune activation [1] with various etiology: infections, malignancies [1,2], autoimmune or autoinflammatory diseases [2], metabolic conditions, or inherited [1]. Severe cytokine activation is responsible for systemic inflammation and visceral lesions [2] (followed by multiorgan failure) [3] induced by immune pathway [2]. Due to its atypical symptoms [1] the diagnostic is not always easy to be established. Its recognition is more difficult to be made in patients with haematological malignancies during aplasia or when the patient has associated infections. If its diagnosis and start of treatment is not made soon, the evolution is often towards death.

Patients with hematological malignancies are immunosuppressed due to their malignancy, some associated diseases (e.g. diabetes, various innate or acquired immunodeficiency, including human immunodeficiency virus infection), and cortico-, chemo- and radiotherapy. It is known that the number of bacteria that inhabit the intestine is much higher than all cells in the body. Bacteria in the intestine can be extremely dangerous to these patients, especially during bone marrow aplasia. Sometimes, they can produce inaugural septic shock and, if empirical treatment consisting in broad-spectrum antibiotics is not done quickly (and we never can be sure that their spectrum cover all bacteria – there can also be multiresistant bacteria), patients can die rapidly. Unfortunately, in recent years, Clostridium difficile (CD) colitis appear more and more frequently everywhere in the world, including in Romanian hospitals. Oncohematological patients are at high risk to develop such an infection.

According to our knowledge, we present the first published case of an acute promyelocytic leukemia patient with an atypical manifestation of a HLH (with elements that could mimic a differentiation syndrome) who later has developed CD colitis.

The patient aged 58, was admitted in Emergency County Clinical Hospital of Sibiu for abdominal pain, fever 39.9 degrees Celsius, chills, sweating, diarrhoea, which started 5 days before. He had chronic marginal periodontitis and lower spleen pole to 3 cm below the costal arch. From biological point of view he had: 600 white blood cells/mm3, 10.3 g hemoglobin/dL, 73,000 platelets/mm3; myelogram and bonemarrow biopsy diagnosed acute promyelocytic leukemia (APL) (75% atypical promyelocytic cells) (Figure 1), diagnosis confirmed by flow-cytometry. The erythrocyte sedimentation rate (ESR) was 102 mm/1 h and it increased to 130 mm/1 h later. C-reactive protein was 192. All bacteriological and mycological examinations which were made then were negative, including the stool culture and the test for the detection of toxins A and B of Clostridium difficile. 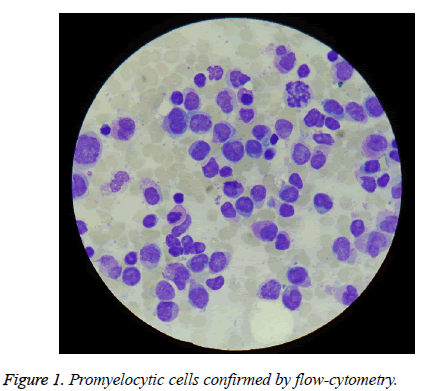 He received a first cycle of chemotherapy with idarubicin and all-trans-retinoic acid (ATRA) and an empiric broad-spectrum antibiotic therapy (meropenem, vancomycin, and colimicyn), fluconazole, and intestinal decontamination. Even during bone marrow aplasia (in the 19th day after the start of chemotherapy, during the treatment with ATRA) he began to present hepatic cytolysis (ALT 85UI/L and AST 43 IU/L), for whose etiology the viral causes were ruled out after repeating the measurements performed at diagnosis, but the contribution of ATRA and fluconazole therapy could not be entirely excluded. Fluconazole was stopped and he continued with ATRA up to APL complete remission.

But due to the fact that he was feverish and sometimes dyspneic (although he was constantly leukopenic, without weight gain, without radiological signs of pulmonary involvement, pericardial or pleural collections, hypotension or kidney failure), we could not exclude a possible beginning of differentiation syndrome (DS) induced by ATRA, which for he received prophylactic therapy with dexamethasone, according to preventive strategy adopted by some groups of hematologists [4], followed by the disappearance of fever. He was in complete remission when hematopoietic recovery appeared, after bone marrow aplasia. But after stopping the therapy with ATRA and dexamethasone, he become again feverish, hepatocytolysis increased (ALT up to 335 IU/L), pancytopenia reappeared, and serum gammaglutamyltransferase and ferritin increased, too (the latest up to 1500 ng/mL). HLH suspicion was supported by the aspect of new myelogram made then, which reconfirmed the presence of complete remission, but discovered macrophage which was phagocyting platelets and red blood cells (Figure 2). HLH treatment with high-dose methylprednisolone and etoposide was followed by success, with normalization of hematological and biochemical tests and ESR decreased to 23 mm/1 h. 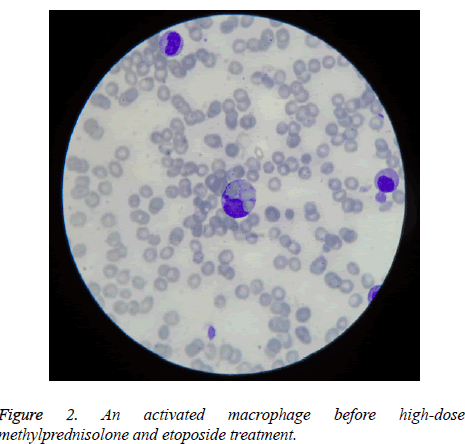 Figure 2: An activated macrophage before high-dose methylprednisolone and etoposide treatment.

The patient had a low-risk APL. He did not have clinical or laboratory signs of disseminated intravascular coagulation either to admission or subsequently, even when HLH was diagnosed. But the presented case shows that a patient with low-risk APL may have an unfavourable evolution if HLH is associated and if it is not discovered and treated in time.

The diagnosis of HLH is supported to our patient by the presence of 5 of the 8 described criteria [5] (which were sufficient for diagnosis): fever, splenomegaly, bicytopenia (leukopenia, obviously with neutropenia, and thrombocytopenia under the limits established for diagnosis), hyperferritinemia, and hemophagocytosis in bone marrow. We could not determine the presence of sCD25 and sCD163, which are useful markers for sustain the diagnosis and to watch the evolution of HLH [6].

In our opinion, the presence of fever at onset (in the absence of any microbiological causes that could been highlighted), of pancytopenia and liver cytolysis occurred after chemotherapy can advocate for the simultaneous start of HLH and APL, but the criteria which are necessary for diagnosis were not present in sufficient number than after discontinuation of dexamethasone therapy.

The diagnosis difficulties were related to overlapping of clinical and laboratory manifestations of APL and HLH. The latter was poor expressed at the beginning (only fever and pancytopenia, which may have other causes, too). Fever is also present in macrophage activation syndrome (MAS) which usually appears in rheumatologic or infectious diseases [7]. Our patient had persistent inflammatory syndrome, unexplained by a possible bacteria or fungal infection which could be investigated and detected by us. We could not exclude a possible infection with parvovirus B19, able to produce cytopenia affecting all bone marrow lineages, and which could also be involved both in HLH and APL appearance [8], or herpes family viruses [7]. All common immunoassays performed were negative, that we had no arguments for a possible autoimmune disease. The proposed score for risk assessment of reactive hemophagocytic syndrome (RHS)- Hscore [9]-was not high: 149. According to it, the probability of having RHS was estimated at only 24.012%.

There are also few published cases of AML who developed HLH: FAB AML-M2, AML-M7 [10], and a case of APL associated since the diagnosis with HS, which had not a good evolution under idarubicin and ATRA, and required etoposide +dexamethasone [11]. It is interesting that 12 published cases with HLH, treated with etoposide developed a secondary leukemia (including 3 cases of APL), about 2 years later. The high dose of etoposide, the used schedule of treatment and the association of other anticancer drugs seems to be involved in this evolution [12].

What is the link between HLH and the appearance of Clostridium difficile colitis? The treatment with etoposide is the main factor involved in this connection. It is known that oncohematological patients treated with etoposide had an increased risk to develop infection with CD [13]. Other risk factors were: the prolonged antibiotic and antimycotic treatment (including the use of carbapenems), corticotherapy, proton pump inhibitors, the risk of contamination related to hospitalization. Even metronidazole given prophylactically (for intestinal decontamination) may promote this infection (and even with metronidazole-resistant strains). In contrast, treatment with piperacillin/tazobactam or, especially, that with tigecycline decreases the CD's sporulation and may explain why the use of these drugs is associated with lower risk of infection with CD [14,15]. Tigecycline is effective in patients with relapsed CD infection [15]. Our patient had not diabetes, renal insufficiency, abdominal surgery, and was not hospitalized in an internal intensive care unit, which are other situations with high-risk of CD infection. We also note that high C-reactive protein levels (as in our patient) and previous use of fluoroquinolones (we have not used them) were associated with a severe infection with CD [16].

The fever present in a patient with acute leukemia may be an expression of hemophagocytic lymphohistiocytosis. When a recently appeared hepatocytolisis has not virological, toxic or drug induced causes, and it is not the result of an ischemic hepatitis or sepsis, and whether the patient has risk factors for hemophagocytic lymphohistiocytosis, he must be investigated in this regard, and promptly diagnosed and treated.