This work focusses on a new, efficient energy detection based spectrum sensing and in addition mitigating the threats of the physical layer of cognitive radio. The Fast Fourier Transform (FFT) of the energy detection method is concatenated with Gould transform. Concatenated approach along with proper choice of windows and its size resulted in improved probability of detection and improvement in signal to noise ratio. Many new classes of security, threats and challenges may be introduced in Cognitive Radio (CR) where attackers could destroy the fundamental function of cognitive radio network and may cause interference to primary users which is not desirable or may deny the licensed spectrum of Primary users (PU) to other secondary users by surpassing PUs in cognitive radio. This is called the Primary User Emulation (PUE) attack. This paper concentrates on dipping the primary user emulation attack by means of an authentication technique. This is achieved by embedding an authentication tag in the error control code, specifically turbo code. This tag is based on chaotic Pseudo Noise (PN) sequence algorithm and Katayapadi algorithm and the same has been implanted in Field Programmable Gate Array (FPGA)

Our radio resource is very limited and most of them are not utilized in an efficient manner. This underutilization problem could be overruled with the aid of cognitive radio. Cognitive radio [1,2] become an encouraging technology to determine the unused spectrum in the frequency band and allows the secondary users to access the free spectrum without interfering with the licensed user (primary user). The unused part of free spectrum or spectrum holes can be found out by a technique called spectrum sensing [3]. Some of the spectrum sensing techniques are energy detection [4], cyclostationary [5,6] and matched filter method [7]. Energy detection gains popularity because of simple nature.

Any intruder [8] might transmit a signal with features to imitate the PU’s signal or a signal having higher power such that it is above the fixed threshold to confuse the receiver. As a result of this, secondary users will count the attacker’s signal to a primary user’s and thus not use the corresponding band. In PUE (Primary User Emulation) attack [9,10], it is possible that the attacker can imitate a PU and thus make a secondary user misinterpret that the spectrum is engaged by a PU.

Having the above mentioned problem in mind, it is essential to maintain a secure method that distinguishes the PU’s signal from that of the attacker. According to FCC, “The incumbent system or the primary user should not be modified to lodge the occasional usage of the channel by the secondary users” Hence, using a helper node this secure communication is achieved. This helper node plays a vital role since the primary user cannot be changed owing to the FCC rules but a helper node can be modified [11,12].

The main purpose of adding tags of authentication in an ECC module is exploit the feature of error correction capacity of the code. In order to implant a tag, we deliberately corrupt the symbols at chosen spots in a code word from the transmitter. On the condition that the number of errors in that sequence (Errors that were embedded and the errors that occurred naturally) is than a certain ‘t’, the error correction code module [16] at the receiver side will correct all code words. Thus, non- CR receivers will interpret this as usual as the tags are transparent to such kind of receivers. The simulation results are plotted out using Modelsim tool and the hardware counterpart of that is carried out using Cyclone II FPGA. This tag is derived from Chaotic PN sequence code and Katayapadi Unicode.

Unlike other transforms (eg. FFT) which converts the signal from one domain to other domain, Gould transform is a standard one which does the process in the same domain. Another unique property of Gould transform is that the elements of forward and inverse transform matrices are zero below the constant main diagonal and sub-diagonals.

The forward Gould transform is given by,

Step 1: The forward Gould transform A for y data is computed by the formula A=Cy where is the N*N Gould transform matrix. If the specified value for N is 2 the output of Gould matrix would be 2*2.

Step 2: Get the values of g and N for calculating forward Gould transform since matrix C is of form NgC

Step 4: gn-k can be computed with the following formula

To generate the authentication tag two types of rules are used

Where j is the number of iterations

B is the system parameter

• Whenever two or more consonants come together as a sequence, the last of it alone will be considered. A consonant without any vowel is ignored.

• Vowels that stand alone are considered to have zero value. Eg: a and ṛ

• The digits are arranged from left to right.

Example: Considering the word “setuvandya”. Now, sa=7, ta=6, va=4, ya=1. The katapaya translated code is 1467 which is the decimal equivalent of it. In order to transmit a data using digital communication technique, it is necessary that it should be in the binary form. The binary code of the above mentioned decimal code is 0001|0100|0110|0111

The ALTERA DE1 (Development and Education) board is mainly used for college laboratory use in understanding digital logic, computer organization and FPGA. Attributing to the Cyclone II 2C20 FPGA it is used for various tasks in digital logic and computer organization that are at different levels of design. Also, the DE1 board supports standard I/O interfaces along with a control panel which helps in accessing the components. The software demonstrates the advanced features of DE1 board. The control panel allows the user to control the components on the board using a USB connection from any host computer. Like the first generation 130 nm Cyclone FPGA, 90 mm Cyclone II are built with low cost and customer defined feature set for those applications which are cost specific. These are known for their high performance and low power consumption. Since it is supported by easy to use and free web edition for Quartus II, the development kits are easily available for low costs [21,22].

Figure 1 shows the block diagram of the concatenated method. The incoming signal along with noise is filtered and passed to the FFT block. The output obtained from this block is allowed to pass through Gould transform block. The concatenated output is fed to windowing function block followed by magnitude squaring device. The average energy obtained is now compared with the predefined threshold. The decision is based on the hypotheses namely 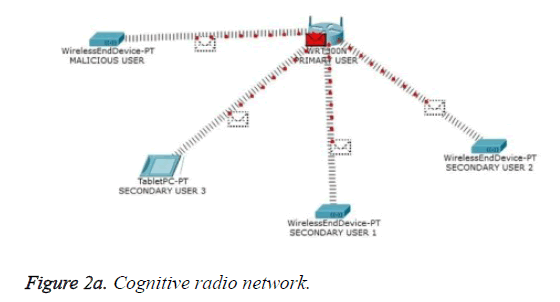 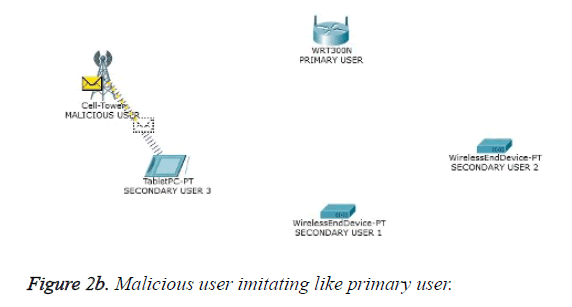 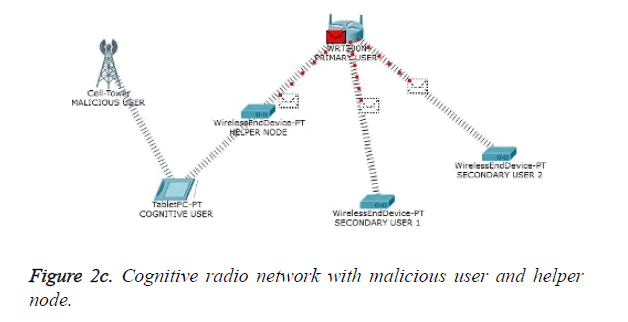 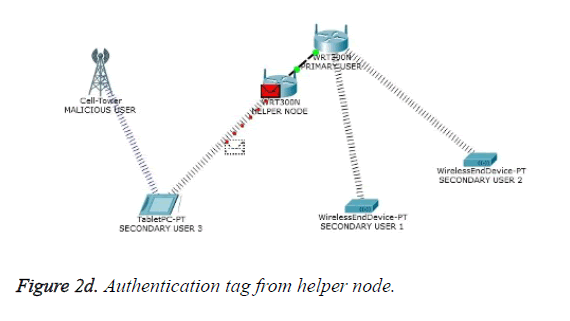 Figure 3 shows a comparison between FFT and FFT concatenated with Gould transform. For the probability of detection of 0.9 the SNR is -20 dB in case of concatenated case whereas it -13 dB in case of FFT approach. This is helpful in detecting the primary user even in weak SNR conditions. 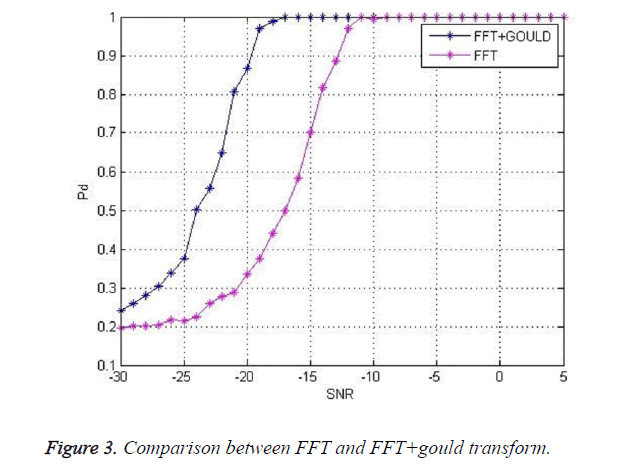 Figure 4 shows the comparison between different window functions. For the probability of detection of 0.9 the SNR in case of Kaiser Window is -13 dB whereas the SNR value is -10 dB in case of hamming window. Kaiser window offers better results in weak SNR conditions because of the reduced sidelobes when compared to other function. 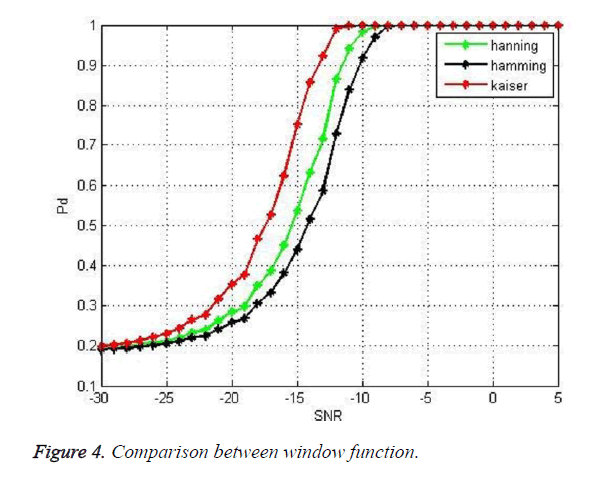 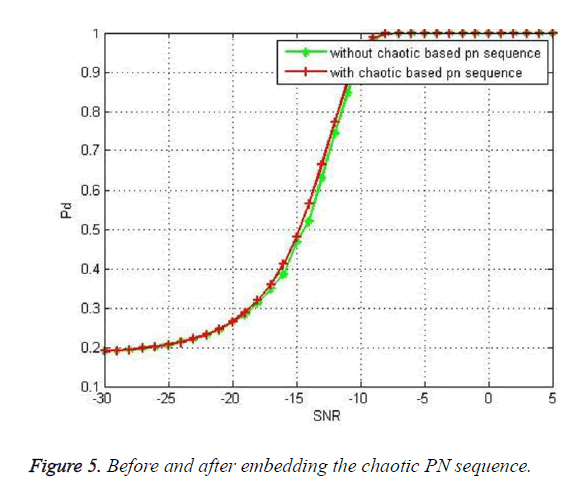 Figure 5. Before and after embedding the chaotic PN sequence.

Figure 7 shows the output of turbo encoder. Turbo encoder was designed by combining two convolutional encoders separated by an interleaver. Interleaver was used in conjunction with the error correcting codes to scramble the symbols. This in turn reduces the burst errors. Interleaver can be used in series or in parallel combination with the convolutional encoder. In this work series combination has been adopted. The constraint length and rate of the convolutional encoder were fixed as K=3 and k=1/2 respectively. The generator polynomials employed were (1,1,1,) and (1,0,1). The output of first convolutional encoder is (10011111001). It is fed as input to the interleaver. Here interleaving operation has been performed through XOR operation of a known sequence. The output of interleaver is 110001001111. It is fed as input to the second convolutional coder. The concatenated output without embedding is 1111010111001110010111101101. It is XORed with the Katayapadi code and the embedded output is 0111110111001110010111101101. 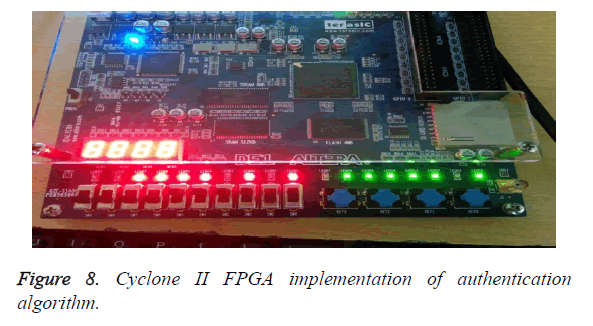 This work deals with two aspects in cognitive radio. First one is efficient energy based spectrum sensing by concatenating FFT with Gould transform. Concatenated approach offered better SNR and probability of detection. Second the work also focused on mitigating the primary user emulation attack by the inclusion of an authentication tag in the parity bits of the turbo code. The authentication tag is generated with the aid of Katayapadi algorithm and chaotic PN sequence algorithm. To gain the advantage of reprogrammability it is implemented in FPGA.