Meditation refers to the practices that focus on training internalized attention under greater voluntary control, and thereby foster specific mental capacities such as relaxation and even complete quiescence. It involves in various practicing techniques and different meditative phases. Since meditation has been found related to relaxation, the changes in autonomic neural system (ANS) of subjects practicing meditation have been of interests in previous studies. Heart rate variability (HRV) has been the technique widely used to measure the activities of ANS. HRV analyzes the characteristics of normal-normal (NN) intervals. Linear parameters in HRV can be divided into two categories: time and frequency domains. HRV parameters of time domain included the root-mean-square of the successive differences of NNs (RMSSD) and the portion of the number of pairs of successive NNs that differ by more than 50 ms divided by total number of NNs (pNN50); while those of frequency domain namely included spectral power of NNs in high frequency (HF, 0.15-0.4Hz) reflecting parasympathetic activity, low frequency (LF, 0.04-0.15Hz) indexing sympathetic function, and low frequency-to-high frequency ratio (LF/HF) as an index of autonomic balance [1]. As far as the HRV parameters in time domain were concerned, meditation was found to increase pNN50 and RMSSD [2]. Increased normalized unit of HF (nuHF) [2-6], decreased normalized unit of LF (nuLF) [2,4,5] and decreased LF/HF [2-5,7] in HRV have been found during various forms of meditation. Nonetheless, HRV characteristics in advanced stage of meditation have drawn little attention to date. The advanced stage of meditation allegedly leads one to experience of complete quiescence, the absence of selfboundaries, blissful feeling, and inner light. The completely quiescent mental state may also be objectively revealed as breath suspension for certain period during meditation [8].

Our goal was to investigate whether there were differences in terms of HRV characteristics during rest, ordinary meditation, and advanced meditative state with breath suspension in a single meditator.

A 46-year-old, right-handed male meditator, who had been practicing breath meditation for 2 years, and reported relatively steady subjective experience of disappearance of self boundaries, blissful feeling, and complete quiescence during meditation. There was neither history of psychosis, cardiovascular disease, nor current use of any medications. The study procedure adhered to the principles of the Declaration of Helsinki. The meditator gave his informed consent after the procedure was fully explained. The meditator underwent 10 sessions of meditation. At the beginning of each session, the meditator was seated comfortably in a well ventilated quiet room, with eyes closed for the baseline measures of HRV parameters at rest. Since an experienced meditator tends to fall into meditative state naturally, the meditator was instructed not to focused his attention on breath during this baseline phase, but randomly alternatively on his four limbs or mind wandering in stead. After 5-minute of measures of HRV at rest as baseline, the meditator was asked to begin practicing breath meditation, that is, focusing on inhalation and exhalation around the nostril, with eye closed. The meditator did not control, but just observe, his breath. The HRV parameters were measured for 5-minute during the second period, the breath meditation. The meditator then signaled when an advanced meditative state characterized by subjective breath suspension and complete quiescence was experienced, and the HRV measures were collected for 5 minutes during the third period, breath suspension.

HRV measures including pNN50, RMSSD, nuHF, nuLF, LF/HF as well as mean heart rate (HR) and mean systolic/ diastolic blood pressures (SBP/DBP) were recorded utilizing portable device ANSWatch TS0411 (Taiwan Scientific co., Taipei, Taiwan), worn on the left wrist of the meditator while recording. ANSWatch TS0411 utilized the piezo-electrical sensors to pick up blood pressure waveforms produced by the radial artery. During a 6- minute calibration test, ANSWatch first obtained heart rate, systolic pressure and diastolic pressure. It then conducted a 5-minute HRV measure with a sampling rate of 500 points per sec, and the original data were fed through a low pass filter at 0 to 14 Hz. Fundamental frequency was determined based upon the first 5-second data. The primary peak in each cycle was determined. Thus peakto- peak intervals were determined. The irregular heartbeats, defined as those with peak intervals greater than 4 standard deviations in the 5-minute measure duration, resulting from cardiac arrhythmia or body movement were auto detected and removed before HRV analysis. Time-domain HRV parameters were calculated by resampling each peak-to-peak intervals to 1024 points with interpolation and Hamming Window adjustment. Fast Fourier Transform was performed with Hamming Window adjustment. Integrations of power spectral density between 0.04 and 0.15 Hz for the LF component and between 0.15 and 0.4 Hz for the HF component were conducted, respectively. Frequency-domain HRV parameters nuLF and nuHF were calculated.

HRV measures of 5-minute were made in 3 phases: rest, breath meditation, and advanced meditative state, that is, when a subjective complete quiescence and breath suspension were experienced. In order to monitor whether objective breath suspension state was reached, we used the thorax module of Embletta X10 system (Colorado, U.S.A.) as a measure for the chest circumstances. According to Farrow and Hebert [8], respiration was considered suspended if, compared with the amplitudes during normal respiration, the tracing did not fluctuate significantly over 10 sec.

Figure 1: Episode of breath suspension lasting over 10 seconds during the advanced meditation 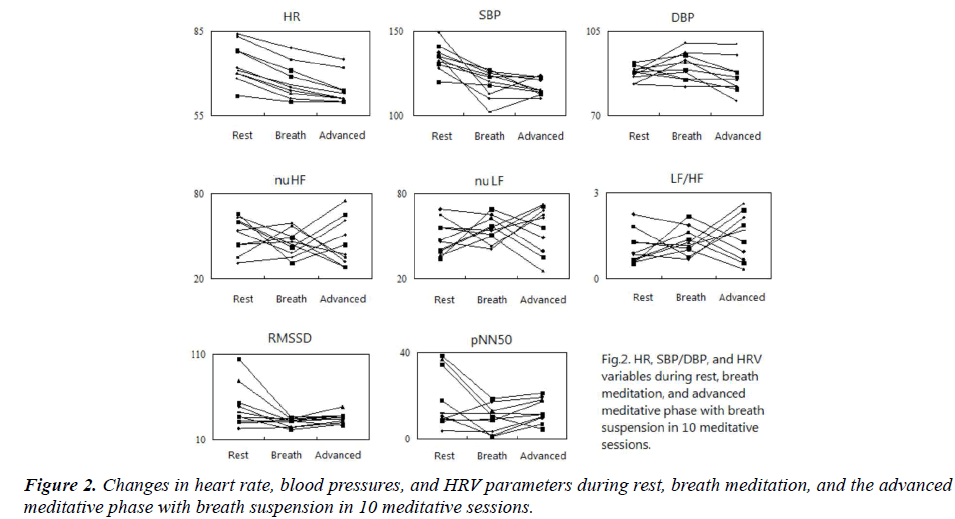 We have repeated measures of HRV parameters in a single meditator for 10 meditative sessions and compared the data during different meditation phases. The results show that when meditation proceeds, no significant difference found between different meditative phases in terms of HRV parameters. On the contrary, HR decreases continuously while meditation advances. Similar trend also exists in SBP. To our best knowledge, this is the first study to reveal the difference of HRV parameters in different meditative phases. Initially our results seem to be conflicting with those of majority of the previous studies, since most studies reported an increased nuHF, RMSSD, pNN50 with corresponding decrease in nuLF and LF/HF. However, after critically analyzing our data, we found that our findings are not aberrant.

As far as the time domain is concerned, Melville et al. [9] reported no significant difference between 15-minute practice of guided meditation and control in standard deviation of normal-normal intervals (SDNN), another HRV parameter of time domain. Wu & Lo [5] also found that while practitioners exercising concentrated meditation, there were no significant session effects between baseline and meditation in terms of RMSSD and SDNN. Telles et al. [10] compared changes in HRV during the first four meditative states, cancalata (random thinking), ekagrata (nonmeditative focusing), dharana (meditative focusing), and dhyana (effortless meditation), described in traditional yoga texts. They revealed that different meditative states showed different results in HRV parameters. They found that during dharana, in which meditative focusing involving internalized focus like the present breath meditation, there were no significant changes in RMSSD and pNN50; while during dhyana, in which effortless meditation was exercised, there was significant increased pNN50. Our results revealed that none of HRV parameters of time domain reached a significant difference while meditation proceeded. Since the meditation technique employed in our study is similar to meditative focusing, our results are concordant with the part dharana [10].

Melville et al. [9] compared guided meditation and control, and their data showed no significant difference during 15 minutes practice in terms of nuHF, nuLF, and LF/HF. Telles et al. [10] revealed that during meditative focusing, there were no significant changes in nuHF, nuLF, LF/HF; while during effortless meditation, there were significant increase in nuHF with corresponding decrease in nuLF as majority of the previous studies reported. Our results found none of HRV parameter of frequency domain reached a significant difference while meditation proceeded. Since the meditation technique employed in our study is close to meditative focusing, our results regarding the HRV parameter of frequency domain is concordant with the part dharana [10]. Therefore, the seeming discrepancy between the present results and the previous findings may be partially attributed to the different meditative techniques.

Since there has been argument that HRV is not an index of autonomic control of the circulation [11], whether HRV can be an ideal index of sympathetic/ parasympathetic activities remains questionable. According to the present results, the variances of HRV parameters, manifested as the ratio of standard deviation to mean, are much greater than those of HR and BP. This fact is also true in the data of some previous studies [5,9,10]. Nunan et al. [12] further reported that, in a systematic review involving 21, 438 healthy participants in 44 studies on HRV measures, a number of studies demonstrate large interindividual variations (up to 260,000%), particularly for spectral measures. That is, HRV parameters, especially those of the frequency domain, possess both large interindividual variations as revealed by the abovementioned systematic review, and large intra-individual variations as manifested in the present study. Therefore, HRV parameters cannot be accurate indexes. Besides, HRV parameters do not concord with the subjective experience of complete quiescence in the present study.

As far as heart rate is concerned, present results are consistent with the findings by Solberg et al. [13]. They found that during the first hour of meditation, HR declined more in the meditators than control. When meditation advanced to the second hour, HR declined further. Melville et al. [9] also reported significant decrease in HR during guided meditation. Although Nesvold et al. [14] reported increased heart rate during non-directive meditation, the meditative technique they employed is different from that in the present study. In fact, non-directive meditation is more like effortless meditation dhyana as mentioned before.

In terms of BP, the present results are concordant with those of Paul-Labrador et al. [15]. They reported that transcendental meditation reduced SBP significantly, but not DBP. The present results suggest that HR itself is a better HRV measures for meditation. It is concordant with the findings of Mukherjee et al. [16]. They examined the sensitivity to mental effort and reliability of various HRV measures. Their data further revealed that heart rate was the most sensitive and reliable parameter, followed by parameters of time domain such as RMSSD and pNN50; while HRV parameters of frequency domain were much less sensitive and reliable. The authors suggested that HR can be considered a strong and reliable outcome measure in mental effort tasks, and HR also found to be the most sensitive measure of HRV in cognitive function tasks. It is also manifested in our data.

There are limitations in the present study. First, only single meditator was studied. The authors tried to find some more meditators with the experience of breath suspension, but failed, since breath suspension is an uncommon experience in meditation. Secondly, since the goal of the study was to investigate HRV parameters during advanced meditation with breath suspension, breathing control was inappropriate for the study; even though different breathing patterns may cause peripheral vascular changes, thus confound HRV measures. Third, what the present study actually measured is pulse rate variability (PRV). According to Schafer and Vagedes [17] PRV is compatible with HRV of sufficient accuracy when subjects are at rest, while some mental stressors seem to impair the agreement of PRV and HRV. It might confound the comparison between the present findings and the previous results.