Objective: Atrial Fibrillation (AF) is one of the important public health problems with elevated comorbidity, advanced mortality risk, and increasing healthcare costs. In this study, the objective is to explore and resolve the imbalanced class problem for the prediction of AF in obese individuals and to compare the predictive results of balanced and imbalanced datasets by several data mining approaches.

Materials and Methods: The retrospective study contained 362 successive obese individuals undergoing Coronary Artery Bypass Grafting (CABG) operation at the cardiovascular surgery clinic. AF developed postoperatively (AF Group) in 42 of the patients, whereas AF did not develop (non-AF Group) in 320 individuals. The Synthetic Minority Over-sampling Technique (SMOTE) was performed to balance the distribution of the target variable (AF/non-AF groups). The LogitBoost and GLMBoost ensemble approaches were constructed with 10-fold cross validation.

Conclusions: The predicted results indicated that LogitBoost on the balanced dataset by SMOTE had the highest and most accurate values of performance metrics. Hence, SMOTE and other oversampling approaches may be beneficial to overcome class imbalance issues emerging in biomedical studies.

Atrial Fibrillation (AF) is one of the important public health problems with elevated comorbidity, advanced mortality risk, and increasing healthcare costs. AF is one of the most commonly experienced and important cardiac arrhythmias. The explanations behind the increasing prevalence of AF have not been efficiently determined; however, may be associated with improved detection, increasing incidence, and enhanced survival in cardiovascular patients. AF is related significantly with advancing age, with about 1 in 25 people above 60 years and 1 in 10 above 80 years influenced by AF. AF causes increasing morbidity/mortality, advancing risks for death, Congestive Heart Failure (CHF), stroke, and other related diseases. Significant risk factors related to the development of AF contain advanced age, hypertension, smoking, alcohol consumption, obesity, prevalent myocardial infarction, CHF, diabetes mellitus and so forth, described in detail by the studies [1-3].

Obesity is one of the important public health problems influencing both children and adults in the world, and also causes important health risks. Obesity is associated with the development and progression of AF. Hence, obesity can be reduced and prevented by conducting effective public health programs [4].

Knowledge Discovery Process (KDP) is related to reproducing and extracting higher-level comprehensions and knowledge from the database. The methods implemented in KDP are based on knowledge-intense stages and can often take advantage of utilizing supplementary knowledge from different data sources [5]. In biomedical research, the KDP has been applied in the different areas of medicine and has attracted interest [6,7].

The primary aim of this study is to explore and resolve the imbalanced class problem for the prediction of AF in obese individuals. The secondary goal of the study is to compare the predictive results of balanced and imbalanced datasets by implementing several data mining approaches.

The current retrospective study contained 362 successive obese individuals who underwent Coronary Artery Bypass Grafting (CABG) operation at the cardiovascular surgery clinic of Turgut Ozal Medical Center, Inonu University, Malatya, Turkey between January 2012 and December 2015. AF developed postoperatively (AF Group) in 42 of the patients, whereas AF did not develop (non-AF Group) in 320 individuals. The exclusion criteria for this study were past atrial arrhythmia, requirement for extra procedures, left ventricle and renal dysfunctions, and chronic obstructive pulmonary disease. Table 1 tabulates the details of the target and predictor variables.

Table 1. The definition of the variables employed in the current study.

Local Density Cluster-Based Outlier Factor (LDCOF) was used to explore outlier observations. This approach utilizes X-means clustering algorithm which determines heuristically the number of clusters [10,11]. In this study, no outlier observations were detected according to the results of LDCOF analysis.

The Synthetic Minority Over-sampling Technique (SMOTE) [12] is one of the oversampling methods and constitutes minority class instances. For this reason, it is commonly employed for the class imbalance problems and produces better results than simple oversampling techniques. The SMOTE is a useful and powerful technique used successively in many medical applications. In relation to implementation of this algorithm, artificial data were created according to the attribute space [13,14].

The SMOTE is employed to achieve an artificial class-balanced or almost class-balanced dataset. The percentage of over and under-sampling (%) and the number of nearest neighbours were adjusted respectively to 700:109 and k=5 to constitute the novel synthetic samples. The DMwR package [15] of R was employed to implement SMOTE.

Boosting technique was essentially suggested to combine many weak learners to increase the prediction performance. LogitBoost, presented initially by [16], is a boosting algorithm employed commonly in many areas [17]. LogitBoost is characterized by presenting a loss function of the log-likelihood to diminish the sensitivity to extreme and outlier observations. Also, it can implement classification and regression through joining a number of weak learners to achieve very powerful and robust learners [18]. Details of this technique can be found [19].

One of the boosting approaches is GLMBoost based on penalized log-likelihood. This approach can be employed widely for the problems of regression/classification since it is one of the important ensemble learning algorithms. GLMBoost has many implementation advantages. In addition to the ease of calculation, GLMBoost indicates different advantages. It has high calculation capacity, and complex tuning procedures are not necessary [20]. More detailed information on this ensemble learning algorithm can be obtained from [21].

In this study, 10-fold cross validation technique was employed for evaluating the models and obtaining unbiased results from the models. LogitBoost and GLMBoost were utilized to compare classification performances of the balanced and unbalanced datasets. All modelling and validation processes were carried out by the caret package of R [22].

In this study, the assessment of the models was performed using accuracy, kappa (κ), Area Under Curve (AUC) of Receiver Operating Characteristic (ROC), recall and precision. These metrics are explained below [23]:

Table 2. Summary of the target distribution before and after SMOTE.

Table 3. The performance metric results of the imbalanced and balanced datasets according to the classification models. 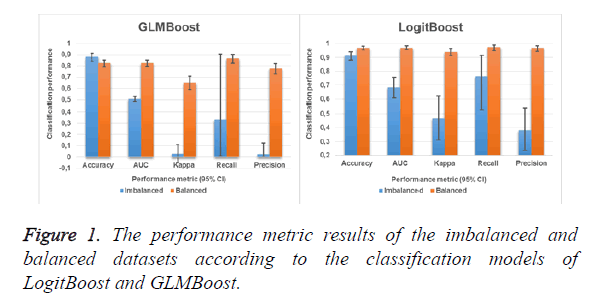 Figure 1. The performance metric results of the imbalanced and balanced datasets according to the classification models of LogitBoost and GLMBoost. 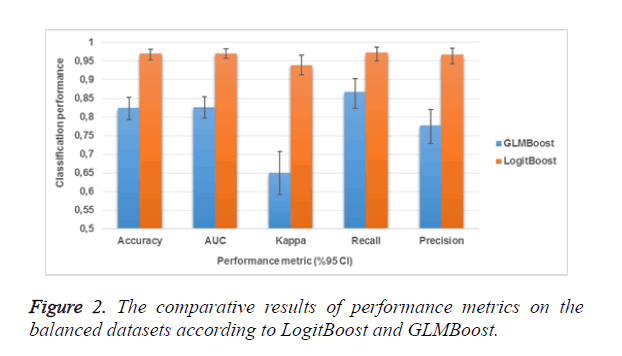 Figure 2. The comparative results of performance metrics on the balanced datasets according to LogitBoost and GLMBoost.

ROC curves of LogitBoost and GLMBoost models and imbalanced/balanced datasets are depicted in the Figure 3. According to this figure, each model has more classification power on the balanced dataset as compared to that on the unbalanced dataset. 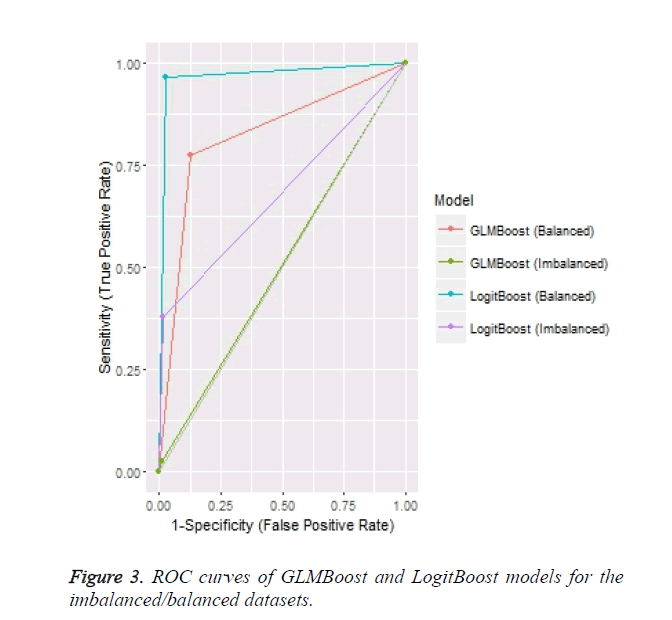 Table 4 represents the LogitBoost model based-predictor importance on the balanced dataset by SMOTE given in descending order. Based on the information of Table 4, the highest predictor importance belongs to hospitalization time in the intensive care unit.

Table 4. Predictor importance of the most accurate model.

This research investigates and resolves the imbalanced class problem by a well-known approach of SMOTE for the prediction of AF in obese individuals. Since postoperative AF after cardiac surgery is rarely observed, the imbalanced class problem can arise in biomedical researches. As expected, the dataset used in the analysis was highly imbalanced and the minority class was the AF group (11.6% for AF group versus 88.4% for non-AF group). To cope with this problem, we performed an oversampling method of SMOTE, and afterwards, GLMBoost and LogitBoost models were built to compare the predictive results before and after SMOTE. In the first stage, when we applied the classification models to the imbalanced dataset, the accuracies of each model were observed so high. However, the values of the other performance metrics were considerably lower than expected. For instance, when the AUC value (0.5088) of GLMBoost model was considered, GLMBoost model was not capable of classifying between the AF and non-AF groups due to the imbalanced class problem encountered in this study. Similarly, although the AUC value (0.6827) of LogitBoost was little more than the value of GLMBoost, the AUC was quite low when considering the accuracy of LogitBoost. When only the accuracies of the models are evaluated on the unbalanced data, the obtained results can be very misleading. For this reason, performance evaluation of the constructed models should be performed based on the results of different performance metrics (i.e. AUC, recall, precision and so on.) as suggested and implemented in the present study [24].

Eventually, the predicted results from this research indicated that LogitBoost on the balanced dataset by SMOTE had the highest and most accurate values of performance metrics. Our results suggest that SMOTE and other oversampling approaches would be so beneficial to overcome class imbalance issues emerging in biomedical studies. As future researches, other sampling techniques incorporating with different ensemble and meta-learning algorithms are planned to handle imbalanced class problems in multi-category classification.

We would like to thank to Inonu University Scientific Research Coordination Unit to support by a grant this study. (Project number: 2016/61).