Hand dermatitis among nurses at a University Hospital in Saudi Arabia

Background: Hand dermatitis is a frequently reported problem among health nurses and other health care professionals worldwide. There is paucity of data regarding this problem in our area.

Objectives: This study aimed to determine the prevalence of hand dermatitis among nursing staff in a University hospital, the factors associated with it and its impact.

Methods: Self-administered questionnaire was distributed to nurses in different departments of a University Hospital in Jeddah.

Hand dermatitis comprises a heterogeneous group of disorders with different morphologies and etiologies. Often, the etiological diagnosis of the clinical type of hand dermatitis needs experience and as no simple relationship can be found between them. Patch testing and exposure analysis are mandatory for the diagnosis [1]. Severity of the disease ranges from very mild to severe and the course can be acute or chronic. Hand dermatitis treatment can be challenging and sometimes unsatisfactory [2,3]. A significant proportion of patients may not receive adequate treatment according to the guidelines on management of hand dermatitis [4].

The questionnaire contained demographic data of gender, age, place of work, years of experience, any chronic diseases, height and weight (to calculate the BMI), caring for children under 4 y of age, smoking (only yes, no or was a smoker and quitted). It also included questions about history suggestive of eczema (Have you ever had an itchy rash that has been coming and going, and has affected skin creases? (by skin creases we mean folds of elbows, behind the knees, fronts of ankles, under buttocks, around the neck, ears, or eyes?)), history of eczema, asthma, allergic rhinitis and allergies from dust, animals or plants. Additionally, it contained questions about the diagnosed of allergy and where and how the diagnosis was made. Then it was followed by a question about the frequency of hand washing in usual working day and the frequency of using disinfecting alcohol for hands in a usual working day, followed by a question about history suggestive of hand dermatitis (Did you have eczema or inflammation of your skin on your hands, wrists or forearms?) and if the answer is yes, subjects were asked to complete the questionnaire.

The second page contained questions about the frequency of hand eczema in the past 6 months, what is the cause of this in the subject’s opinion, if the subject has ever visited a doctor for this complaint, times of flares and whether hand dermatitis improves with long vacations from work. This was followed by a question about the factors that increase hand or wrist/forearm eczema outside work place, and whether eczema on hands, wrists or forearms affected daily activities by any way in the occupation. Following that, there was a multiple selection question about the influence of eczema on the financial situation and on the psychological well-being?

This study protocol was approved by the unit of biomedical ethics research committee at King Abdulaziz university Hospital (Reference No 400-16).

Data was reported as frequency and percentages (%) of hand dermatitis groups and analysed using SPSS (version 21). Statistical significance for the difference in the frequency between subjects with and without hand dermatitis was determined by Pearson chi-square χ2 test. The continuity correction in R was computed for 2 × 2 tables. The effect size for the chi-square test of independence was determined using the phi coefficient. A P<0.05 values (two-sided test) was accepted as statistically significant.

Table 1: Characteristics of study groups according to hand dermatitis.

Table 2: Characteristics of nurses with and without hand dermatitis.

The nurses who reported having hand dermatitis symptoms were all female. Places of work were: 1 in emergency room, 3 in the operation room, 4 in the labor and delivery, 1 in the nursery, 1 in blood bank, 1 in outpatient department, 1 in the patient education department, 1 in nursing research and 1 in the nursing education department. In the past 6 months, 4 of them had it once and lasted for a week or less, one had it once and lasted for more than a week, one had it nearly once every month, one had it once every week, and one had it nearly all the time. The rest of them did not specify the incidence and duration of had dermatitis. Having hand dermatitis is thought to be caused by gloves or hand hygiene by 4 nurses, the others thought it was caused by water, climate or did not know the cause. Only 3 nurses saw a doctor for their hand condition, while 7 confirmed not seeing a doctor. In terms of time and season of having hand dermatitis, 5 nurses reported having it on work days, 3 had it in the very cold weather, and 2 with exposure to dust. On questioning whether hand eczema improves with long vacations from work, 5 replied yes, 4 replied no and one was not sure. The factors that increased hand conditions outside working place are presented in Figure 1. Gloves were mostly implicated, followed by soap, liquid soap, shampoo, and other personal hygiene products. 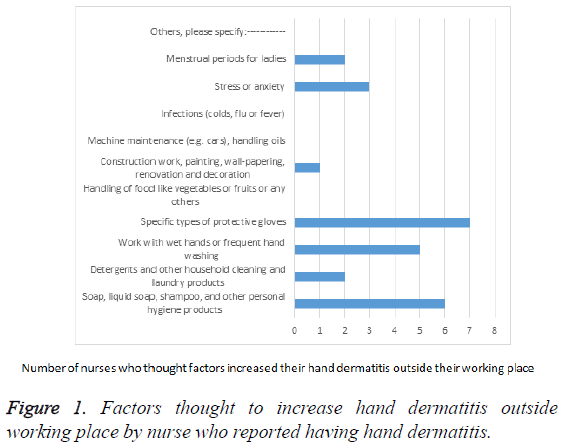 In terms of how did hand dermatitis affect daily activity, 3 nurses reported that they had to avoid doing some tasks in their job, 2 reported having difficulties in doing some tasks and none had to change or lost jobs or had to take sick leaves. Regarding the financial influence of hand dermatitis; 10 nurses reported that they were affected financially, 1 had some financial loss because of the problem and none had any substantial financial effect. Regarding the psychological effect of this condition, 6 reported no effect, 4 reported some anxiety or stress, and none reported any considerable effect on anxiety or stress, family problems, or depression. One nurse only reported that hand conditions caused a decrease in her self-confidence.

In this study the association of hand washing frequency with hand dermatitis could not be determined due to the variation in the responses as it was an open question. The responses included uncountable, many times and after each patient. In future studies, options of variable numbers can be used in order to get a more specified data. The other limitation of this study could be related to the type of data collection depending on recall of symptoms with no clinical confirmation of hand dermatitis.