In oral implantology, the aim of a bone augmentation procedure is the repair of bone tissue and defects [1]. Autogenous bone grafts remain the gold standard treatment for bone defects. However, the need for a second surgery, the limited size of the graft, and graft resorption has mandated a search for alternative graft materials and treatment methods for guided bone regeneration (GBR). For these reasons, synthetic bone grafts have been developed. A hydroxyapatite (HA) synthetic bone graft is a type of calcium phosphate ceramic graft [2,3]. As compared with autogenous bone grafts, HA synthetic bone grafts have been shown to stimulate bone regeneration in experimental animal studies, with excellent stability and bone-regenerative characteristics. Due to their composition and structure, HA bone grafts slowly degrade and are gradually replaced by bone. Additionally, in animal studies, HA grafts have been shown to encourage GBR, having a high osteogenic capacity as compared with autologous bone grafts [4-7]. Bisphosphonates (BPs) are used to prevent and treat bone tissue resorption. Throughout BPs’ interaction with bone tissue, they reduce osteoclastogenesis, and thus, have a relatively osteoblastic effect. Zoledronic acid (ZA) is a strong BP. A single-dose ZA application has been shown to have favourable effects in various models of bone tissue repair and intraoperative healing [8-12].

Polyethylene glycol (PEG) has also been demonstrated to be a biocompatible and resorbable membrane when used in GBR procedures. Various preclinical and clinical trials have evaluated the long-term barrier function of PEG membranes. PEG membranes were demonstrated to be effective in clinical GBR procedures involving dental implants, acting much like native collagen membranes and lasting up to five years [13]. We believed that HA grafts mixed with ZA would have favorable effects on the GBR method with a PEG barrier membrane for the treatment of periimplant bone defects. In this study, we evaluate the effects of locally administered ZA with HA synthetic bone grafts surrounded by PEG resorbable barrier membranes on the GBR method in an experimental peri-implant bone defect model.

The experimental design and study protocol were approved by the Local Experimental Animal Ethics Committee at the University of Firat, Elazig, Turkey. In total, four male one-year- old New Zealand rabbits were used. Their body weights ranged from 3000 to 3200 g on the first day of the experimental protocol. The animals were kept in temperature-controlled cages, were exposed to a 12 hr/12 hr light/dark cycle, and had ad libitum free access to food and water during the experimental period. The recommendations of the Helsinki Declaration, related to the protection of experimental laboratory test animals were complied with exactly.

First, the rabbits were divided randomly into two groups, as described below:

HA Graft group (n=2): This group had a peri-implant bone defect filled with only an HA bone graft, and a resorbable PEG barrier membrane (0.2 mm) was placed over each surgical defect to cover the implant and the bone defect.

HA Graft + ZA group (n=2): This group had a peri-implant bone defect filled with an HA bone graft that had previously been mixed with zoledronic acid (0.2 mg/ml). Each graft was soaked in a ZA solution for 5 min, and the unbound ZA was not rinsed away, as described by Toker et al. [4]. A resorbable PEG barrier membrane was placed over each surgical defect to cover the implant and the bone defect.

General anaesthesia was administered using 35 mg/kg ketamine hydrochloride and 5 mg/kg intramuscular xylazine. Surgical operations were performed under sterile conditions. After general anaesthesia, prior to the surgical application, the tibial skin was washed with povidone iodine and shaved. The skin incision used to reach the tibia was made over the tibial crest. We used a periosteal elevator to lift the flap and periosteum to reach the tibial bone. In both groups, a total of 16 large sandblasted acid-etched surface implants (Esdent Dental Implants, Gulmaksan , Izmir, Turkey) 6 mm in length and 3 mm in diameter were integrated into the metaphyseal section of the tibia. Two implants per tibia and four implants per animal were integrated [14]. The standardised circumferential defects (3 mm depth and 3 mm width) around the dental implants were treated with one of the two treatment methods described above [15]. All surgical procedures were performed atraumatically by the same researcher. The tibial skin was sutured with 4/0 polyglactin resorbable sutures. A penicillin antibiotic and an analgesic were intramuscularly injected into all animals after the operation. This was done once a day for three days.

Sixty days after the surgical implant placement and bone grafting procedures, the rabbits were sacrificed. The rabbit tibias were dissected from the muscles and soft tissues and fixed in a 10% formaldehyde solution. The specimens were embedded into 2-hydroxyetylmetacrylate resin, allowing the cutting of the undecalcified bone and titanium with an Exakt® Microtome (Exakt Apparatebau, Norderstedt, Germany). For histologic and histomorphometric evaluation, each section was ground with an Exaktgrinder® (Exakt Apparatebau, Norderstedt, Germany), and a section 50 μm in thickness was obtained for light microscopy. For the histological analysis, Toluidine blue stains were used. After this procedure, a histologic and histomorphometrical analysis was performed to quantify the bone tissue response to the peri-implant bone defect. These procedures were performed at the Department of Oral and Maxillofacial Surgery in the Dentistry Faculty at the University of Cukurova, Adana, Turkey, and in the Firat University Faculty of Medicine Department of Medical Pathology, Elazig, Turkey. The histologic and histomorphometrical analysis used to quantify the newly formed bone around the implants was performed using an image analyser. The newly regenerated bone and defect fill were represented by the proportion of newly formed bone area within the surgically induced defect [13,15,16].

For statistical analysis, SPSS software was used. For all the analysed data, the mean values ± standard errors of the mean for each group were calculated. The differences between the two groups were tested with a Student t-test. P-values<0.05 were considered to indicate statistical significance.

The histomorphometric results are presented in Table 1. Sixty days after grafting, all peri-implant bone tissue defects grafted with either HA only or with HA+ZA exhibited significantly increased defect fill due to newly formed bone, and a larger amount of newly regenerated bone was detected in the HA+ZA group as compared with the HA group (P<0.05) (Figure 1). 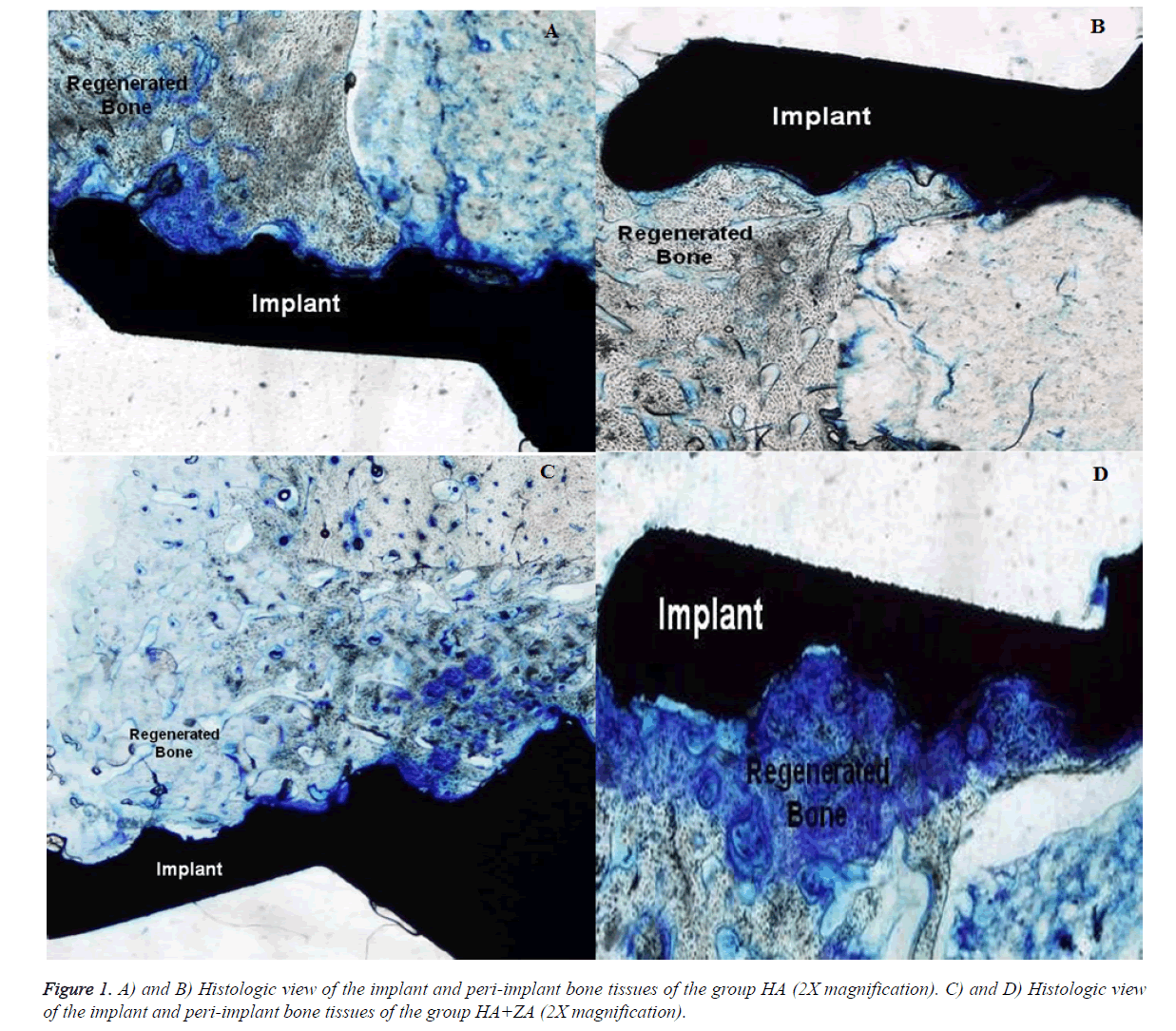 BP pre-treatment can be useful in preventing bone graft resorption in skeletal bone diseases. Bone cell culture studies have also indicated that BPs can increase bone formation indicators at very low concentrations [4,5,12]. Due to their direct action on osteoclastic cells, it is evident that BPs can affect the bone-formation process. Osteoclast cell function may be changed by the production of an osteoclastic inhibitory factor secreted by osteoblasts following BP administration. During the bone-remodelling process, osteoblastic cells control the activity of osteoclastic cells. BPs increase the proliferation and maturation of osteoblastic cells and reduce apoptosis [4,5,12]. This supports the hypothesis that BPs may have an anabolic effect on bone tissue cells and thus increase bone tissue formation. As such, the target cells of BPs may include members of the osteoblastic cell family [17,18]. It has been shown that BPs can increase the proliferation of osteoblasts and the synthesis of collagen and osteocalcin by bone cells at the cellular level [4,5,10,11,17,18]. In the present study, a histological analysis indicated that the newly formed bone area was larger in the HA+ZA group at the end of the study as compared with that seen in the HA group. The topical application of ZA resulted in significantly more bone formation than was observed in the HA group. This confirms the results of earlier studies regarding bone augmentation with local ZA application and the association between bone tissue cells and BPs [4,5].

BPs reach the revascularised sections of bone tissue, but not the unvascularised graft, when used systematically [4]. However, long-term BP use has been associated with osteonecrosis of the jaw [19,20]. Local BP treatment of bone tissues provides protection against bone resorption without any broader skeletal effects [4]. Additionally, in local BP pretreatment, the majority of the BP adsorbs to the bone surface of cancellous bone, while a small volume stays free in the solution between the trabeculae [4,10]. In this study, it was hypothesised that local ZA use would activate osteoblastogenesis. Mixing the grafts with a BP solution before application to the peri-implant bone tissue defects seemed to be an acceptable method [4,5,10,11]. Treating bone with local BP may facilitate bone tissue healing without systemic effects. In earlier studies, it was reported that the local application of BP solution on an allograft increased osteogenesis [4-6]. The present study confirmed this; local ZA treatment of the bone graft increased the osteogenesis of the graft material and enabled more bone formation as compared with that seen in the graft-only groups [4,5].

Investigations of synthetic polymers for use as barrier membranes in GBR applications have shown that these polymers have some advantages when compared with collagen membranes [13,16]. A PEG-derived membrane is a synthetic polymer material that has shown encouraging results when used as a barrier membrane in GBR. PEG is a polymer that has been developed for use in wound covering with highly compatible tissue [13,15,16]. In a four-week animal study, the authors reported that PEG membranes were as effective as non-resorbable membranes in calvarial bone tissue defects in rabbits with respect to the amount of new bone tissue formation within the test sites at four weeks [21]. In mandibular defects created in mini-pigs, PEG membranes were also proven sound with regard to space maintenance in that they prevented soft tissue breakdown and outperformed polylactic acid membranes and non-membranes in terms of the percentage of newly regenerated bone tissue and the inhibition of tissue ingrowth [13]. Additionally, an experimental dog study examining the use of PEG, as compared with collagen membranes, for GBR procedures and simultaneous implant integration showed similar results regarding the newly regenerated bone tissue [22]. A randomised controlled clinical study in humans that investigated delayed or late implant integration with simultaneous GBR showed that PEG had similar results regarding the percentage of defect fill as compared with collagen membranes [23]. In our study, in both groups, we detected bone tissue regeneration in the periimplant bone tissue defects. Thus, as concluded in previous studies, the PEG membrane is a useful material in GBR procedures.

Within the limitations of this study, locally administered ZA used with an HA synthetic graft and a PEG membrane is a more effective method as compared with the use of only a graft with a PEG membrane in peri-implant GBR procedures. Additionally, a PEG membrane should be useful as a barrier membrane in GBR. Further studies are needed to confirm these results.

The authors wish to thanks Gulmaksan, Esdent Implant, Izmir, Turkey for proving the implants.

The animal handling procedures and experimental protocols were approved by the Animal Etchic Commity of Firat University.