There is a need to establish up-to-date growth standards for use in assessing the adequacy of children’s growth in every population, especially those with peculiar environmental chal-lenges. The purpose of this study is to update growth reference values for the normal population of urban infants (0-24 months) from the high altitude area of Southwestern Saudi Arabia, and to compare these values with the current international standards established by the US Na-tional Center for Health Statistics (NCHS). Anthropometric measurements of weight, length and head circumference were obtained from 5,426 healthy, well-fed infants of both sexes, ages 0 – 24 months, drawn from all socio-economic strata in Abha, Saudi Arabia in a cross-sectional study conducted between March 1998 and December, 2004. Values were corrected for age in the form of centile bands, and compared with the NCHS standards. Then, 5th, 10th, 25th, 50th, 75th, 90th and 95th local percentiles were calculated from such values using the frequencies procedure. centile curves of wt/age, length/age and HC/age. Abha infants of both sexes are significantly lighter (p<0.0001), shorter (p<0.0001) and have smaller head circumferences (p<0.0001) than NCHS reference values. About 77.5%, 54.4% and 73.1% of infants fell below the 10th centile for weight, length and head circumference respectively. This study establishes current and generally applicable growth reference values for the high altitude urban infants of Aseer region to be used in infant growth monitoring and promo-tion.

The physical growth of children provides an excellent measure of their health and nutrition while the average values of their heights and weights reflect the state of a nation’s public health and the average nutritional status of its citizens [1]. Furthermore, growth assessment plays an invaluable role in pediatric practice, not only for epidemi-ological purposes but also for the follow-up of childhood diseases. A worldwide variation in human growth has been well documented and several studies have shown significant differences in the growth rates of children from different populations due to differences in their health and nutritional status, environmental conditions and genetic makeup [2,3]. It is therefore essential that growth reference values be established for every country. In all populations studied, but especially in developing societies, secular trends in children’s growth and development have also been observed i.e. the tendency towards improved growth and earlier maturity in later generations of the same population as health systems nutrition improve [4,5]. Thus, growth standards need to be updated every one or two decades so as to reflect secular trends. Environmental conditions also contribute to differences in human growth characteristics. The growth-retarding effects of high altitude hypoxia are well known with several studies reporting healthy, well-nourished high-altitude children shorter and lighter than their age-matched low altitude counterparts [6,7].

The city of Abha is located in the Aseer mountains of Southwest Saudi Arabia at an altitude of 3133 m above sea level. Previous studies [8,9] have shown that Abha term newborns and healthy, well-nourished infants are lighter and shorter when compared to their age-matched counterparts from Europe and the US and to their Saudi counterparts from the surrounding low-altitude areas. The present study was undertaken to establish current growth reference standards for infants in the high altitude Aseer region of Southwestern Saudi Arabia to determine if a secular trend exists and to compare the local standards to the US NCHS international standards [10].

The Aseer Region of Saudi Arabia is situated in the south-western corner of the country. The topography of the region varies from altitudes as high as 3200 m in the Aseer mountains to lowland areas of 400 m down to the Red Sea. Abha, the capital city of Aseer region (population 1,200,000 ) in south-western Saudi Arabia, lies about 350 km away from the northern border of the Republic of Yemen at 3133 m above sea level. Abha General Hospital is located in the middle belt region of the city and it is the only maternity Hospital in Abha City. It has active obstet-ric and neonatal services. The Neonatal Special care Unit has over 3500 live births annually.

A two- stage stratified random sample of 5,426 infants ages 0-24 months was selected. At the first sampling stage, the 9 primary health care centers (responsible for delivering primary care services for the different catchment areas in the city) were classified into four groups according to geographical location and socioeconomic level based on an expert opinion. Using the equal allocation method of sampling, one centre was randomly se-lected from each of the four groups and all infants ages 1-24 months who attended the well-baby clinics for vaccination constituted the target group of the present study from March 1998 to December 2004. All term babies (≥ 37-42 weeks gestation) born at Abha General Hospital during the same period by women residing the catchment areas of the 4 randomly recruited PHCCs within the city were also allocated for the present study.

Thus, a total of 5,426 babies of both sexes, made up of 920 newborns and 4,506 infants from 1 to 24 months of age, were studied. Severely malnourished babies and cases of Down’s syndrome, rickets, sickle cell disease and other congenital abnormalities which affect children’s growth were excluded from the study. An ethical clear-ance was obtained from each institute before commencing the study. 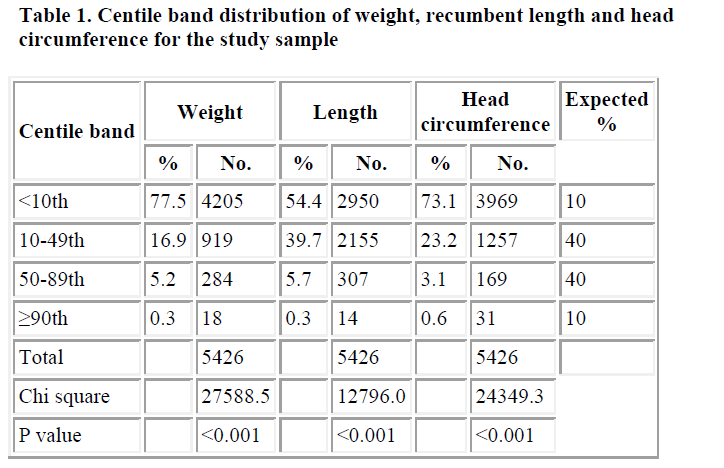 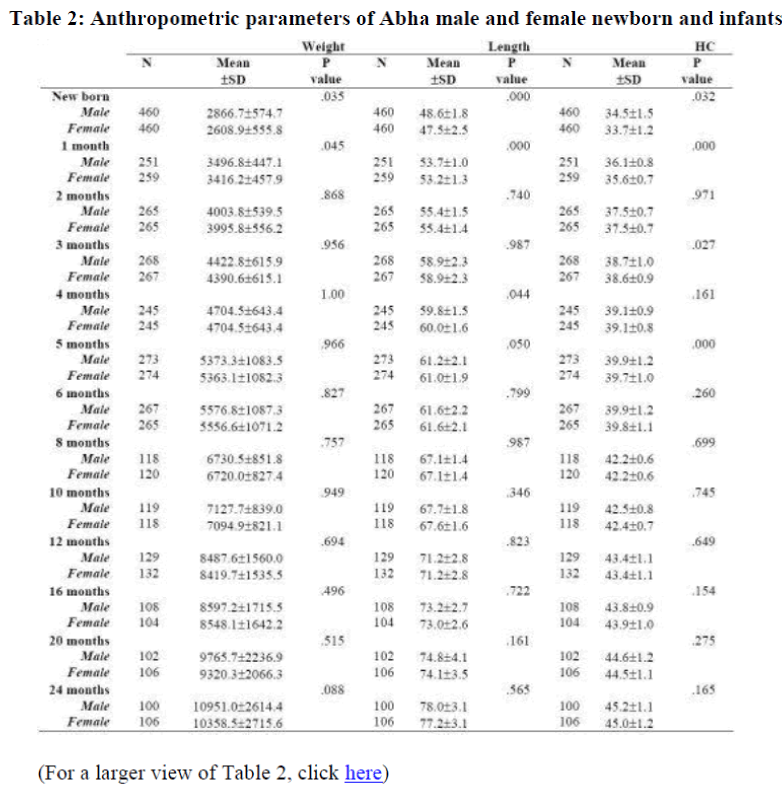 Figures 1-6 show the corresponding constructed growth curves for both sexes.

Tables and Figures could be obtained from publisher: info ( at ) biomedres.org

Space for Tables 3 and 4

Space for Figures 1 and 2

Space for Figures 3 and 4

Abha infants in the present study were significantly smaller in all growth parameters than the NCHS reference population [10]. In addition, infants of the present study were shorter, lighter and had smaller head circumferences than those in a previous study in the same high altitude area of Aseer region [8]. The small size of newborns in this study relative to newborns from lowland areas of Aseer region [9] is easily explained by the well-known growth-retarding effects of high altitude hypoxia [7,12] typified by a sparing of head growth. Newborns in the present study had significantly larger mean head circum-ference/body weight ratio (12.5 cm/kg) than newborns from low altitude areas of the same region (11.6 cm/kg) [9] suggesting that the small size of the former is a case of secondary or assymetrical intra-uterine growth retardation due to hypoxia of high altitude [7].

Somewhat surprisingly, Abha newborns and infants in this study are significantly lighter, shorter and have smaller head circumferences than those of a similar study [8] conducted 17 years ago in Khamis Mushyat, a sister city to Abha and located at approximately the same altitude as Abha. The phenomenon of secular trends would lead one to expect the opposite i.e. growth parameters in the present study should be greater than those of the ear-lier study. A possible explanation for this discrepancy is that the earlier study used babies of a high income group while the present study used a mixed sample of all in-come groups. The earlier study was carried out in a mili-tary hospital catering exclusively to elite military person-nel. It is well established that birth weight and children’s growth are affected by both high altitude and the eco-nomic status of their parents [8]. In a comparative study of growth parameters from low- and high-income groups, previous studies found that high-income population had different growth parameters than low-income population [13,20]. In another comparative study of growth parameters of babies from low- and high-income groups in La Paz (>3500 m above sea level) it was found that high-income’s group babies had significantly larger head circumferences than low-income’s group babies [7]. Thus, our data are preferable than previously published data for use as reference standards for the high altitude newborns and infants of the region.

We concluded that the use of the NCHS growth standards is not appropriate for the assessment of growth of infants aged 0-24 months in the high altitude area of Abha, Asser region. This study establishes current and generally applicable growth reference values for the high altitude infants of Aseer region to be used in infant growth monitoring and promotion. There is still a need for further studies to determine the exact impact of high altitude on the growth patterns of infants living in the high altitude area of Abha, Asser region, Saudi Arabia and whether altitude, climate, or socioeconomic status - or combinations of them - are responsible or not for such pattern of growth parameters values of infants

The authors acknowledge, with gratitude the assistance of Directors, Doctors and Nursing staff of primary care centers who participated in this study and the medical and nursing staff of the neonatal intensive care unit of Abha General Hospital for their cooperation and invaluable efforts.