Nasopharyngeal Carcinoma (NPC) is the most common cancer originating in the nasopharynx. Aberrant proliferative signals and apoptotic dysregulation are required for NPC development. However, the mechanisms behind them are still unclear. In this study, we explored role of GON4L, a new-found transcriptional repressor, in NPC cells. Knockdown of GON4L expression impaired NPC cells colony formation and proliferation. Cisplatin-induced apoptosis was enhanced by downregulation of GON4L. Forced expression of GON4L resulted in promoted proliferation and inhibited apoptosis of NPC cells induced by Cisplatin. Furthermore, GON4L knockdown inhibited β-catenin accumulation, wnt, P53 and Bcl-2 expression. Inhibition of GON4L transcriptional suppressive activity reversed GON4L-induced NPC cells proliferation and survival. In conclusion, these data suggest that oncogenic role of GON4L and provide a new potential therapeutic target for NPC treatment.

Nasopharyngeal Carcinoma (NPC) is one kind of malignant tumors characterized by higher invasiveness, metastatic potential in the world [1,2]. It is a high incidence of malignant tumor in China and presents higher mortality in clinical [3-5]. Clinical observation and experimental study indicate pathogenic factors of nasopharyngeal carcinoma are extensive, such as hereditary factors, virus infections, and environmental factors [6,7]. Evidences have revealed that NPC initiates from the epithelial cell of nasopharynx and is famous for its regional lymph node metastasis and distant metastasis in NPC patients [8,9]. Strategies of inhibition of migration and invasion have been proposed in clinical regiment for NPC therapy [10]. Understanding mechanism(s) of these local metastasis and distant metastasis are essential for the progression of NPC patients.

GON4L is a new identified transcriptional repressor. Genetic study has indicated that GON4L plays essential role in haematopoiesis by regulation of YY1, co-repressor Sin3a, and histone deacetylase 1 in zebrafish and mice experiments [11]. In recent year, GON4L is identified as a transcriptional repressor in human cancer cells, which can stimulate cancer growth through an YY1-androgen receptor-CD24 axis [12]. Lu et al. have indicated that Gon4l protein is required for B lymphopoiesis and may function to regulate gene expression during these molecular processes [13]. Therefore, we assumed that GON4L may be a potential target for NPC therapy.

Previous studies have revealed that β-catenin/wnt signal pathway involves in the progression of growth and aggressiveness of human cancer [14,15]. Weinberger et al. have showed that association of nuclear, cytoplasmic expression of galectin-3 with beta-catenin/Wnt-pathway activates thyroid carcinoma activity and stimulates cells cycle of thyroid carcinoma cells [16]. Interestingly, β-catenin/wnt signalling pathway is known to have a critical role in carcinogenesis and in epithelial-to-mesenchymal transition in fibromatosis, metaplastic carcinomas and phyllodes tumours of the breast [17]. In this study, we presumed GON4L regulates nasopharyngeal carcinoma growth and proliferation through regulation of β-catenin/wnt singling pathway. Here, we present evidences that GON4L knockdown significantly inhibits growth and aggressiveness of NPC cells through down-regulation of β-catenin/wnt signaling pathway. Importantly, apoptosis of nasopharyngeal carcinoma cells was markedly promoted by GON4L knockdown.

All siRNAs were synthesized by Invitrogen (Shanghai, China) including Si-RNA-GON4L (Si-FasL) or Si-RNA-vector (Si- Vector). HNE1 and CNE2 cells (1 × 106) were transfected with 100 pmol of Si-GON4L (Applied Biosystems) with Si-vector as control (Applied Biosystems) by using a Cell Line Nucleofector kit L (Lonza).

HNE1 and CNE2 were transfected by Si-vector or Si-GON4L and culture in 96-well plates for 48 h. After incubation, 20 μl of MTT (5 mg/ml) in PBS solution was added to each well, the plate was further incubated for 4 h. Most of the medium was removed and 100 μl of DMSO was added into the wells to solubilize the crystals. The OD was measured by a BIO-RAD (ELISA) reader at wavelength of 450 nm.

Total RNA from HNE1 and CNE2 cells was extracted using RNAeasy Mini Kit (QIAGEN, Gaithersburg, MD). All the forward and reverse primers were synthesized by Invitrogen. All mRNA levels were quantified by using Power SYBR Green Master Mix (Applied Biosystem). Relative mRNA expression levels were calculated by 2−ΔΔCt. The results analysed in triplicate according to the Delta-Delta threshold (ΔΔCt) method as the n-fold way compared to control.

HNE1 and CNE2 cells after knockdown or overexpression of GON4L (1 × 104) were plated in six-well plates. Cells proliferation were stained with crystal violet (0.005%) for 30 minutes and photographed. Clonal numbers of HNE1 and CNE2 cells were analysed by Alpha Innotech (San Leandro, CA) imaging software.

Apoptosis of HNE1 and CNE2 cells was assessed by incubation these cells with Cisplatin (3.0 mg/ml) for 48 h. After incubation, HNE1 and CNE2 cells were trypsinized, collected, washed in cold PBS, and adjusted to 1 × 106 cells/ml with PBS, labeled with annexin V-FITC and PI (Annexin VFITC Kit, BD), and analysed with a FACScan flow cytometer (BD).

HNE1 and CNE2 cells were fixed were fixed with paraformaldehyde (4%) in HEPES buffer (50 mM, pH 7.3) for 1 hour and permeabilized with 0.2% Triton X-100 in PBS (pH 7.4) for 30 minutes at room temperature. The cells were then incubated with the rabbit anti-human primary antibodies (Survivin (ab469) and LIMD2α (ab205375) diluted 1:50 in T-PBS. Samples were settled at 4°C overnight and incubated further with secondary antibodies Alexa Fluor 488-conjugated goat anti-rabbit IgG and Alexa Fluor 594 phalloidin (catalog NO A12381, Life Technologies), respectively. All samples were cover slipped with Dako fluorescence mounting medium (catalog NO S3023, Dako, Carpentaria, CA). Impaired neurogenesis was analysed by fluorescence microscope (Olympus BX61, Japanese).

Results are calculated as mean ± SEM. Significance was established with the SPSS statistical (SPSS, USA) and GraphPad Prism 5 software (GraphPad Software, USA), Pearson's correlation coefficient or a two-tailed Student's t-test. The data are presented as the mean and SEM of three independent experiments. Differences were considered significant at *P<0.05, **P<0.01. 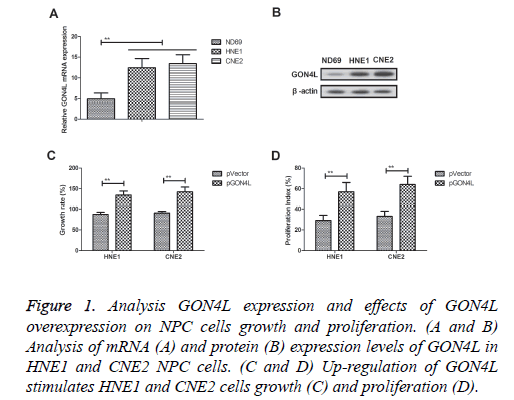 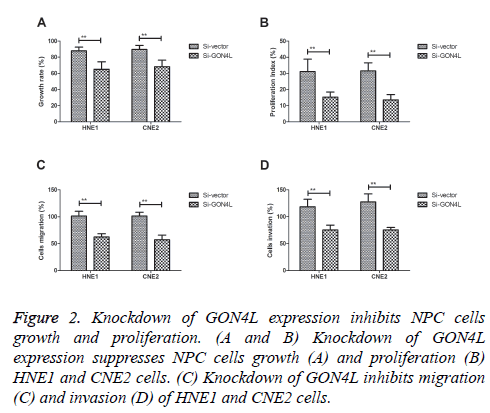 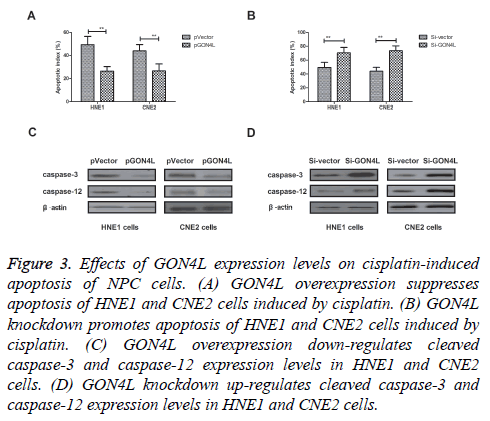 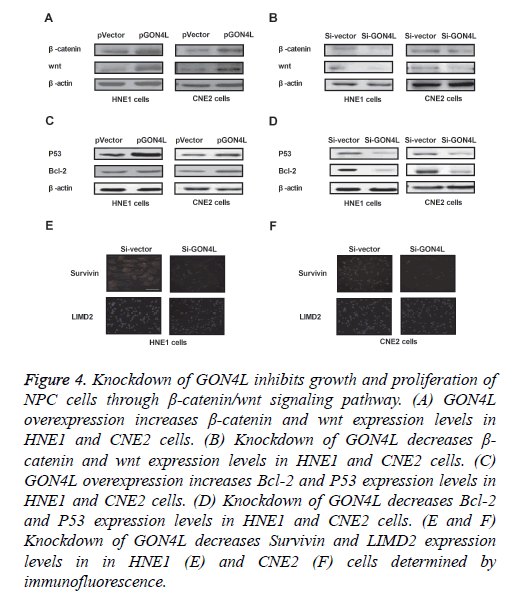 NPC is a rare cancer with regional allocations, but presents relative higher metastasis among human tumors [19,20]. GON4L has been identified as transcriptional repressor that can be as a molecular target for bladder cancer therapy [12]. In addition, inhibition of β-catenin/wnt singling pathway contributes to suppress growth and proliferation of nasopharyngeal carcinoma [21,22]. In this study, we assumed that GON4L regulates growth and proliferation through β- catenin/wnt singling pathway in nasopharyngeal carcinoma cells. Findings have suggested that GON4L is overexpressed in NPC cells and overexpression of GON4L promotes growth and proliferation as well as inhibits apoptosis of NPC cells induced by Cisplatin. Notably, knockdown of GON4L significantly inhibits growth and proliferation, which further enhances apoptosis of NPC cells through up-regulation of cleaved caspase-3 and caspase-12 and down-regulation of P53 and Bcl-2 expression levels.

Growth and proliferation of NPC cells is associated with metastatic characteristic and apoptosis resistance via alteration of cell cycle progression [23]. Previous reports have indicated that Survivin is overexpressed in nasopharyngeal carcinoma, resulting in enhancement of apoptosis resistance and rapid proliferation of NPC cells [24,25]. Cai et al. have showed that Survivin gene functions is related with prognosis in patients with nasopharyngeal carcinoma, which may be helpful for prognostic and anti-cancer treatment appraisal [26]. Peng et al. have indicated that LIMD2 is a novel small LIM-only protein related tumor migration and invasion, which is overexpressed in metastatic lesions and can promote tumor cells aggressiveness by directly binding to and activating the integrin-linked kinase [27]. In this study, results revealed that knockdown of GON4L significantly inhibits expression levels of Survivin and LIMD2 in HNE1 and CNE2 cells, which may contribute to inhibition of growth and proliferation. These investigations suggest that GON4L is associated with NPC cells growth and proliferation by inhibition of Survivin and LIMD2 expression levels in vitro.

Currently, β-catenin/wnt signal pathway is associated with growth and proliferation of NPC cells that up-regulation of β- catenin and wnt expression enhances the resistance of tumor cells apoptosis [28,29]. Report has indicated that β-catenin is important for cancer stem cell generation and tumorigenic activity in nasopharyngeal carcinoma [30]. Yu et al. also indicated that genetic polymorphisms of Wnt/beta-catenin pathway genes are associated with the efficacy and toxicities of radiotherapy in patients with nasopharyngeal carcinoma, which may be novel prognostic factors for NPC patients treated with radiotherapy [31]. In this study, we have found that GON4L regulates growth and proliferation by down-regulation of β- catenin/wnt signal pathway in NPC cells. GON4L knockdown significantly inhibits β-catenin and wnt expression levels, which further enhances Cisplatin-induced apoptosis of NPC cells.

In conclusion, this study we found that GON4L can regulate the colony formation and proliferation of NPC, which can be regarded as an anti-tumor target gene. Findings have indicated that GON4L expression level is up-regulated in NPC cells. However, knockdown of GON4L can significantly inhibit the proliferation and migration of HNE1 and CNE2 cells. These results indicate that GON4L is associated with NPC proliferation and aggressiveness, so it may provide a strategy for exploring molecular mechanism and tumor targeting therapy for NPC patients.