Pigmentation in the gingiva may cause aesthetic problems. In addition to medical therapy and conventional surgery, laser techniques have been used to treat this condition for many years. However, until now, there have been no reports of the application of an erbium:yttrium-aluminum-garnet (Er:YAG) laser combined with a neodymium:yttrium-aluminum-garnet (Nd:YAG) laser in gingival depigmentation. The aim of this study was to propose a minimally invasive surgical approach employing low-level laser therapy (LLLT) with Er:YAG and Nd:YAG lasers for gingival discoloration. Two clinical cases of “black anterior gingiva” were surgically treated with a sequential combination of Er:YAG and Nd:YAG lasers. In the treatment process, an Er:YAG laser was first used for depigmentation, and an Nd:YAG laser was then used for pain and inflammation control and potential infection prevention. The patients experienced no bleeding, reported a low level of discomfort during and immediately after intervention, and showed complete disappearance of pigmentation at the 1 y follow-up. The present cases showed that laser therapy combining Er:YAG with Nd:YAG is effective in depigmentation procedures and can reduce the duration of treatment and postoperative discomfort.

Discoloration of the oral mucosa or gingiva is associated with several exogenous and endogenous factors [1-3]. Clinical pigmentation in the gingiva may cause aesthetic problems [4,5]. Consequently, multiple depigmentation techniques have been employed, including bur abrasion, surgical scraping, and electro surgery [6-8]. Recently, various lasers have been introduced for use in depigmentation [9,10] and laser ablation for gingival depigmentation is recognized as one of the most effective, reliable techniques [11-14]. In particular, the Er:YAG laser was demonstrated to be effective in periodontal tissue management [15] and Nd:YAG LLLT has been applied in a wide range of cutaneous, mucosal, and bone disorders with biomodulative and analgesic purposes [16-20]. However, to date, there have been no reports on the use of Er:YAG combined with Nd:YAG lasers in gingival depigmentation.

This study reports a procedure for managing gingival melanin pigmentation with combined Er:YAG and Nd:YAG LLLT therapy, patient’s discomfort during and immediately after the operation, and the satisfactory prognosis noted at the 1 y follow up.

This study was conducted in accordance with the Declaration of Helsinki. The study protocol received approval from the Ethics Committee of the General Air Force Hospital of the PLA of China. Written informed consent was obtained from each participant.

A 43 y old Chinese female who complained of her “black gum” visited the Department of Periodontology, the General Air Force Hospital of the PLA of China. This study was conducted in accordance with the declaration of Helsinki. This study was conducted with approval from the Ethics Committee of the General Air Force Hospital of PLA of China. Written informed consent was obtained from participant. Diffused and mottled hyperpigmentation was found on the labial surface of both the maxillary and mandibular arches from the gingival papilla to the attached gingiva (Figure 1). No petechia or bleeding was observed during pre or post-operative assessments. Follow-up was conducted at 1, 2, 3 and 7 d and at 1, 6 and 12 months. The patient complained of mild local pain in the first 2 d following surgery. One week later, the gingival hyperpigmentation spot had disappeared completely and re-epithelisation was almost complete. However, the epithelium had not yet recovered its thickness, and the connective tissue was still exposed, with whitish slough visible (Figure 2). Subsequently, gingival hyperpigmentation remnants were removed by a combination of Er:YAG and Nd:YAG laser treatment, quadrant by quadrant, using the same method as that in the initial procedure. The procedure did not cause any injury to the tooth surfaces or adjacent tissues, and maintained healthy papillary edges and sufficient free gingival margins to decrease the risk of gingival recession (Figures 3 and 4). The patient was asked to rate the pain severity by herself using the VAS at 1 2, 3 and 7 d following surgery (Table 1). She complained of more pain in the mandibular area than in the maxillary region, and there were no differences between the left and right sides (Table 1). One month after laser therapy, reepithelization was complete and the epithelium had recovered its thickness (Figure 5B). At the 6th month follow-up exam, the gingiva exhibited a normal appearance, with pink colour and keratinization (Figure 5C). At the 12th month revisit, the gingiva had a normal appearance without re-pigmentation (Figure 5D), tissue deformities, gingival recession, or loss of papilla. The patient was satisfied with the significant improvement in gingival colour during the followup period (Figure 5). 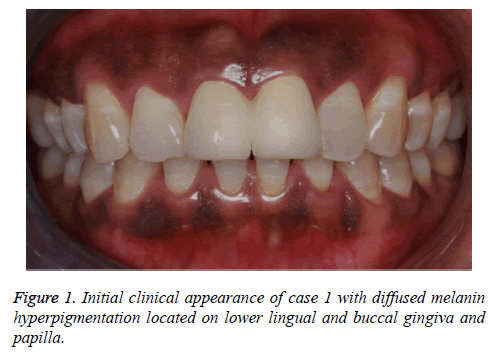 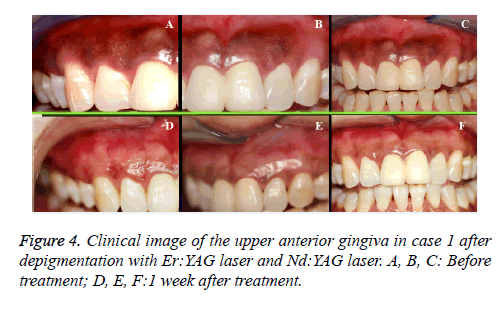 Figure 4: Clinical image of the upper anterior gingiva in case 1 after depigmentation with Er:YAG laser and Nd:YAG laser. A, B, C: Before treatment; D, E, F:1 week after treatment.

Figure 5: Clinical images of case 1 at the first visit and the follow-up. A: Pre-operative view with diffused gingival melanin hyperpigmentation; B: 1 month post-operation, re-epithelisation was complete and the epithelium recovered its thickness; C: 6 months later, the gingiva showed a normal appearance with a pink colour and keratinization; D: 12 months post-operation, the gingiva showed a normal appearance without repigmentation.

A 24 y old Chinese male was admitted with the chief complaint being his “colourful gums” (Figure 6A). After complete removal of pigmentation by the Er:YAG laser with preoperative anaesthesia, Nd:YAG LLLT was used to irradiate the uncovered area of melanin pigmentation in the mucosal layer. Revisits were conducted at 1, 3 and 7 d and utilized VAS, as well as at 1 and 12 months postoperatively (Table 1). The gingival hyperpigmentation was removed completely (Figure 6B). At the 12th month revisit, the gingiva exhibited a normal appearance without any re-pigmentation (Figure 6C). This study was conducted in accordance with the declaration of Helsinki. This study was also conducted with approval from the Ethics Committee of the General Air Force Hospital of PLA of China. Written informed consent was obtained from participant. 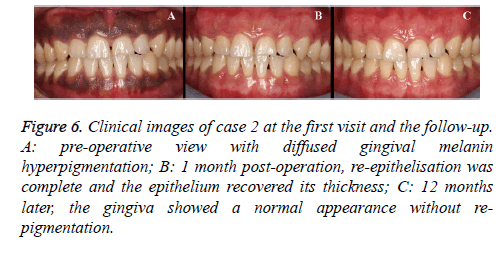 Figure 6: Clinical images of case 2 at the first visit and the follow-up. A: pre-operative view with diffused gingival melanin hyperpigmentation; B: 1 month post-operation, re-epithelisation was complete and the epithelium recovered its thickness; C: 12 months later, the gingiva showed a normal appearance without repigmentation.

Common pigment components such as melanin, carotene, and haemoglobin form the natural colour of the gingiva [3,21]. Gingival melanin pigmentation causes aesthetic concerns, and cosmetic therapy is important for patients suffering from this problem [22,23]. Laser systems are attractive for both practitioners and patients for many reasons. In particular, the Er:YAG laser, which has been applied in dental treatment to both hard and soft tissues, can minimize the damage to deep tissues and prevent scar formation. Moreover, the Er:YAG laser is effective in accomplishing depigmentation through ablation of the hyper pigmented gingiva, but it is associated with long and significant postoperative discomfort [13,24]. It has been reported in previous studies that LLLT has bio stimulatory effects on trophism of the mucosa both in vivo and in vitro [25]. Beneficial effects include alleviated pain, increased blood flow, endothelial cell proliferation, collagen synthesis, and faster wound healing [26,27]. Therefore, the use of Nd:YAG LLLT may ease the postoperative reaction caused by the Er:YAG laser’s damage to tissues adjacent to the gingival melanin pigmentation.

Patients were satisfied with the aesthetic results in the present cases, since no pigmentation remained on the marginal gingiva or papilla. Previous research claimed that the gingival tissue should be entirely cleared of melanin to prevent re-pigmentation, especially in the interdental papilla, since recurrence may result from melanocytes migrating from these areas [28]. Another factor that may influence the recurrence rate of gingival pigmentation is the number of laser procedures used. The total number of required sessions varies, depending on the type of laser treatment performed [29]. In the present cases, Er:YAG laser therapy associated with low-level Nd:YAG laser therapy may be ideal for depigmentation, since no re-pigmentation is observed even with one session. Furthermore, the effective spot size for Er:YAG laser therapy is only 0.7 mm, which is sufficient for the treatment of the gingival margin and papilla.

The first case presented an interesting situation during the treatment of gingival pigmentation by combined treatment with Er:YAG and Nd:YAG lasers. During the first and second days following surgery, there was more sensitivity and pain in the mandibular vestibule area than in the maxillary vestibule. We theorize there are two possible reasons. First, there was a higher distribution of gingival melanin in the mandibular vestibule than in the maxillary region, and the patient may have perceived a greater degree of pain in that area due to the surgical trauma caused by the laser. Both of these two lasers can have acceptable therapeutic effects on gingival pigmentation [30]. Second, individual differences may account for the differences in pain perception. The second patient reported no differences in pain perception between the mandibular vestibule and the maxillary vestibule. This aspect requires further study of additional patients, which will allow us to conduct statistical analyses and determine whether there are statistical differences.

Continued, long-term observation can confirm the possibility of re-pigmentation following laser treatment; thus, periodic checks and assessments should be conducted to evaluate the recurrence of melanin pigmentation. In the present cases, improved aesthetics were sustained over a follow-up period ranging from 1 week to 12 months, despite the fact that patients smoked occasionally. This is consistent with the findings from studies of multiple sessions of Er:YAG laser treatment with no recurrence of gingival hyperpigmentation during the follow-up periods [10,24,29].

We performed only 1 y of clinical follow-up after laser treatment of two patients with gingival hyperpigmentation. More clinical cases and longer follow-up periods are needed to better evaluate the effects of combined Er:YAG and Nd:YAG laser therapy in gingival pigmentation.

However, the anaesthetic effect of lasers may lure patients away from injection therapy and its possible side effects. Moreover, the ablation techniques achieved aesthetic satisfaction and good wound healing without obvious signs of infection or pain. Certainly, prudent assessment of the gingival condition-including such factors as gingival thickness and degree of pigmentation-is required, and a longer follow-up period is needed to adequately evaluate the effects of Er:YAG ablation combined with Nd:YAG LLLT. The present study showed almost complete depigmentation in two severe hyperpigmentation cases following melanin elimination by two lasers with consistent parameters. Further studies are needed to reveal whether different parameters and time intervals have an effect on achieving depigmentation using a combination of Er:YAG and Nd:YAG lasers.

The results of the present cases show that the employment of an Er:YAG laser in conjunction with low-level Nd:YAG laser therapy is effective in removing gingival pigmentation. This procedure could reduce both the duration of treatment and postoperative discomfort.

The authors declare that there is no conflict of interests.

This research was supported by the Project of Clinical Application Research and Achievements of Capital Beijing Characteristics (Z151100004015210), the project of the General Air Force Hospital of PLA (KZ2015013), the project the National Natural Science Foundation of China (81170929).