Background: Giardia lamblia is a protozoan parasite, and it is most frequently detected as an intestinal pathogenic parasite in humans worldwide. Objective: To determine the genotype of Giardia lamblia and the sub-assemblages for each genotype using semi-nested PCR and restriction fragment length polymorphism. Methodology: DNA samples were isolated from the stools of 100 patients infected with G. lamblia (after examination by copromicroscopy) and amplified by PCR. The 93 positive samples after using PCR, were digested with NlaIV and RsaI fragment restriction fragment enzymes. The samples were taken randomly and the residence and age for every case were taken. According to the location of residence, the cases were divided into urban areas (the cities) and rural areas (the villages). Result: Genotype A represented (32.3%) {AI (5.3%), AII (26.9%)}, genotype B represented (39.8%) {BIII (22.5%), BIV (17.3%)} and mixed A, B represented (28%). Giardia genotype B was the most common genotype among cases included in this study while sub-genotype AII accounted for the majority of cases. Males were more affected 62 (66.66%) than females 31 (33.33%), (79.6%) cases were from rural areas while only (20.4%) cases were from urban; the highest incidence was between (2-6) years represented 72.1%. The variation in sex, residence and age distribution was found to be statistically significant (PV=0.05, 0.03, 0.03 respectively). Molecular analysis for glutamate dehydrogenase (gdh) gene had been shown to assemble genotypes A and B isolates into four groups: AI, AII, BIII, and BIV by using semi-nested PCR technique. Conclusion: Giardiasis is a still common parasitic infection, particularly in young children in rural areas more than urban areas, and in males more than in females in Sohag Governorate, Upper Egypt. Molecularly it was found that both genotype A (sub-genotypes AI, AII), genotype B (sub-genotypes BIIIm B IV), as well as mixed genotypes A and B, were found in examined patients.

Giardia lamblia is one of the most common diarrhea-related parasites in almost all vertebrates, including humans [1]. It affects all age groups; with prevalence rate varying from (2%-5%) in the industrialized world and (20%-30%) in the developing world. It is more prevalent among children [2,3].

Giardia is transmitted through the orofecal route following direct or indirect exposure to the cyst, by ingestion of contaminated food, drinking contaminated water or direct contact with the infected individuals [4].

Due to its impact on health, especially among children in developing countries, giardiasis has been included in the Neglected Diseases of the World Health Organization (WHO) since 2004 [5].

A variety of molecular techniques, including Multiplex PCR, Restriction Fragment Length Polymorphism (RFLP), real-time PCR, and sequence analysis of housekeeping genes have proved to be used as tools for discrimination of all assemblages and to provide powerful tools for understanding the molecular epidemiology, infection sources, and zoonotic potential of human giardiasis [1].

Although it is very common in Egypt; limited studies have been done on the molecular characterization of the parasite [2]. Molecularly, Giardia lamblia has been divided into several genotypes and sub-genotypes that differ in virulence and clinical outcome [6]. Hence, we performed the detection of G. lamblia and determination of its genotype simultaneously by Polymerase chain reaction using semi-nested PCR technique on isolates obtained from humans.

This experimental study was performed at the laboratory of Medical Parasitology Department, Faculty of Medicine, Sohag University and Molecular Biology Center at Assuit University, from October 2017 to September 2018.

The research team followed the ethical standards of confidentiality and freedom to participate. The respondents or their parents were informed that the study was voluntary and they were assured that their privacy would be protected and all of them gave written consent for taking and studying their specimens.

Stool samples had been collected from 525 patients who had diarrhea (loose watery stool more than three times per day) from different localities in Sohag Governorate. 100 samples proved to have Giardia after coproscopical examination by saline and iodine wet mount examination. The positive samples were amplified using the PCR technique. Only 93 positive samples resulted after using PCR. These 93 samples were digested with NlaIV and RsaI fragment restriction fragment enzymes.

The glutamate dehydrogenase gene was successfully amplified from 100 positive samples for Giardia lamblia. Out of 100, only 93 positive cases were detected (Table 1). A 432 bp fragment of the gdh gene was amplified in a semi-nested PCR (Figure 1).

Table 1: The number of positive and negative cases and their gender. 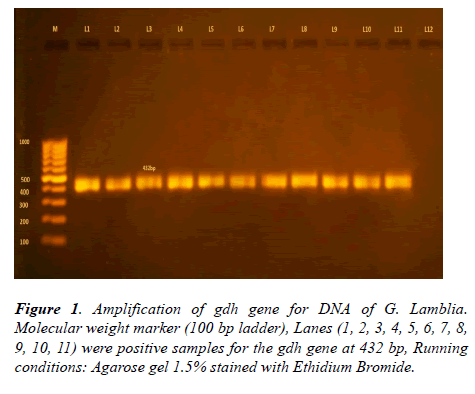 The following (Table 2) shows the sizes of the expected fragments (bp) and the diagnostic fragment sizes (bp) for each sub-genotype which we used to analyze our results.

Table 3: The frequency of each Giardia lamblia genotype and sub-genotype. 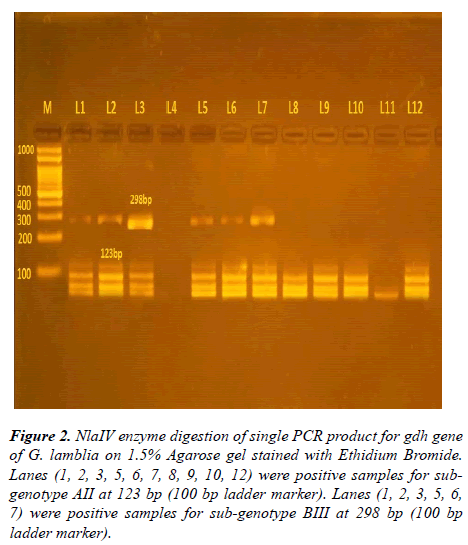 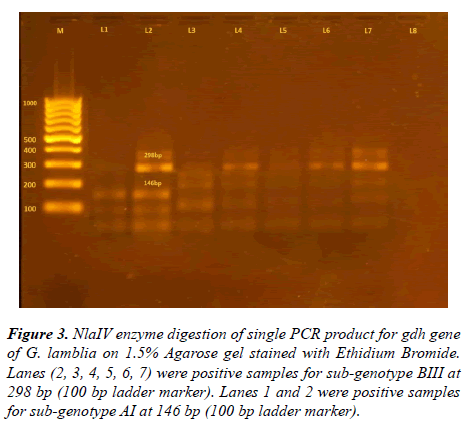 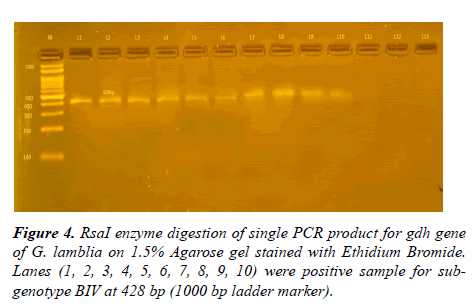 • Frequency of each Giardia lamblia genotype and subgenotype (Table 3)

• The relation between locality and sub-genotypes AI, AII, BIII, BIV and mixed A, B genotypes (Table 4)

The p-value for locality using the legacy dialog non-parametric test was 0.03 (significant). And the Chi-square (χ2) test for locality distribution was 32.527 with no cells have expected frequencies less than 5. The minimum expected cell frequency was 18.6. We used the paired-samples T-test to compare between both locality and Giardia lamblia sub-genotypes at a 95% confidence interval, and the p-value was 0.88 (non-significant)

Table 4: The relation between locality and sub-genotypes AI, AII, BIII, BIV and mixed A, B.

• The relation between age groups and sub-genotypes AI, AII, BIII, BIV and mixed genotypes A, B (Table 5)

Table 5: The relation between age groups and sub-genotypes AI, AII, BIII, BIV and mixed A, B.

The intestinal protozoan Giardia lamblia was frequently found in diarrheal disease throughout the world affecting humans and other mammalian species [7].

In the current study, 100 positive stool samples for Giardia lamblia were detected by microscopy. After the amplification of the glutamate dehydrogenase (gdh) gene, only 93 samples showed positive results. The negative fecal samples could be explained by low DNA levels, the presence of a solid wall that inhibit the release of DNA from the cysts or the presence of PCR inhibitors in some of the fecal samples such as lipids, bile salts, polysaccharides from mucus, bacteria, and food degradation product or dissolution of parasite during storage [8].

The gdh gene is one of the most common and advantageous genetic markers for genotyping of G. lamblia. Molecular analysis for this gene had been shown to assemble genotypes A and B isolates into four groups: AI, AII, BIII, and BIV by using PCR-RFLP techniques [9,10].

In the present study, the ratio of assemblages A, B, and mixed A and B are near to each other and this can be explained by the high grade of pollution, poor sanitary conditions and the great role of zoonosis in infection transmission in our locality.

In regard to the relation of sex to the prevalence of giardiasis, out of the 93 positive samples, there were 60 (64.5%) males while 33 (35.5%) females. The variation in sex distribution was found to be statistically significant (PV=0.03). This agreed with [25] in Egypt, [26] in Portugal, [2] in Egypt and [20] in Spain, who stated that the incidence of giardiasis is higher in males than in females. These results disagreed with [27] in Malaysia, [28] in Zambia and [29] in Slovakia, who stated that the prevalence in females was higher than males. They assumed that this was due to these females taking care of their own children or from working in nursing homes or care-day centers. The results in this study agreed with the behavioral and familial habits in our locality. Male children are highly active with great freedom than females and this makes them more subjected to infection with Giardia cysts from the polluted environment around them.

In regard to the relation of residence to the prevalence of giardiasis in the present study, out of the 93 positive cases, 74 (79.6%) cases were from rural areas and 19 (20.4%) cases were from urban areas. The variation in resident distribution was found to be statistically significant (PV=0.03). These results agreed with [25] in Egypt, [30] in Nigeria, [2] in Egypt and [31] in Iran, who reported that the prevalence of giardiasis was more in rural than urban areas. These results agreed with the nature of our locality which is mostly rural areas. The infection in rural areas is more likely to occur than urban areas because of many social, behavioral, environmental, familial and zoonotic factors. However, the present results disagreed with the results reported by [32] in Saudi Arabia as they reported that the infection rate was higher in urban than in rural areas. These changes in the distribution might be due to the differences in the nature of rural and urban areas.

These results agreed with [33] in Ghana, [2] in Egypt, [34] in Iraq, and [29] in Slovakia who reported that the highest prevalence was between 3-5, 1-10, 2-4 and (<7) years respectively. However, the present results disagreed with [35], in Mongolia, and [13] in Egypt who stated that giardiasis was highest in children aged (6-12) years. They attributed these results to a greater risk of exposure, lack of immunity and those infections in adults are mostly asymptomatic and thus are less likely to be diagnosed. On the other hand, [26] Portugal reported that there was no significant association between Giardia prevalence and age.

Giardiasis is a still common parasitic infection, particularly in young children in rural areas in Sohag Governorate, Upper Egypt. Genetically, it was found that both genotype A (subgenotypes AI, AII), genotype B (sub-genotypes BIIIm B IV), as well as mixed genotypes A, B, were present in the examined patients.