Genetic diversity of the Striped Hamster is density- and seasonal-dependent

Conclusion: The specific reasons for these results may be caused by density- and seasonal-dependent dispersal of the Striped Hamster, which is in accordance with Elton hypothesis.

The striped hamster is a dominant rodent species in northern China plain and is also distributed in Russia, Mongolia and Korea. The climate of the northern China is arid and characterized by warm and dry summer and cold winter with the minimum temperatures of -20°C in history [1,2]. The striped hamsters feed on stems and leaves of plant during summer and on foraging crop seeds in winter. They are solitary and very aggressive [3]. The lifetime of the hamsters is about 1.5 to 2.5 year. The reproductive cycle is about 2 months.

Many factors affect animal population fluctuation, and they can be divided into environmental and biotic factors. Environmental factors, such as temperature, precipitation, irrigation and others, act directly on the structure of the animal population, modify the spatial and temporal distribution of the species [4]. Biotic factors, including predation, competition, food availability and quality could make certain pressure on the population survival [5-7].

All the operation of handling the Striped Hamsters in this study were inspected and approved by the Ethics Committee of Qufu Normal University. All the researchers had received professional training and had the permission to conduct animal studies.

Striped Hamsters were captured monthly during 2004-2008 using iron traps in Wu Village, Qufu city, Shandong province, China. The place is located in the (116°98’E, 35°58’N) North China Plain, and it has four seasons and a typically warm-temperate climate. The Striped Hamsters were live trapped using a brand of trap (Table S1).

The captured hamsters were euthanized by CO2 asphyxiation immediately, and given a unique number. Record the sex and weight, then dissect and measure the hamsters to provide estimates of body size, age, and reproductive condition. There are more than 20 permanent plots used as hamster trapping in Wu village. Each plot contained three parallel trapping lines with about 30 m apart from each neighbor trapping lines. About thirty traps were placed along every trapping line with an interval of 5 m. Trappings were carried out for 3 consecutive days in mid-month during 2004-2008 to avoid trapping too many animals. Population densities were defined as the percentage of the trap success (T%). Trap success was used as an index for the density of the Striped Hamsters. It is calculated as: T%=Total number of captured hamsters/total number of traps × 100%.

The genomic DNA was extracted from liver tissues using the traditional phenol-chloroform extraction method. Liver tissue is an ideal material for high DNA extraction efficiency for higher DNA content and no fat matrix exist in liver tissue than others. Nine microsatellite loci of the Striped Hamsters (Table S1) were used on the basis of its high amplification efficiency and rich polymorphism. The sequence of each locus was amplified by PCR including 50 mM KCl, 10 mM Tris-HCl, 2.5 mM MgCl2, 0.2 mM each dNTP, 1 U of Taq DNA polymerase (Promega), 10 pM forward and reverse primers, and approximately 2 ng of genomic DNA in total of 25 μL. The PCR procedures began with a 5 min pre-denaturing step at 94°C, followed by 30-35 cycles of the following reaction steps: denaturing at 94°C for 45 s, annealing at 46~58°C for 45 s, and extending at 72°C for 1 min, with a final extension step for 5 min at 72°C. All products were analysed in an ABI 377 instrument (Perkin-Elmer Applied Biosystems, Foster City, California) and the gel analysis was conducted by using GENESCAN3.1 (Perkin-Elmer Applied Biosystem).

The genetic diversity of the yearly populations 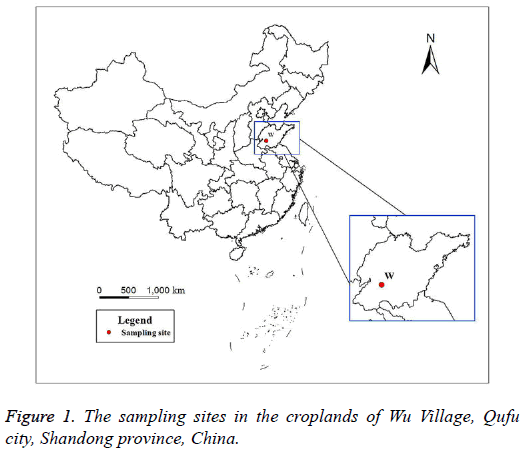 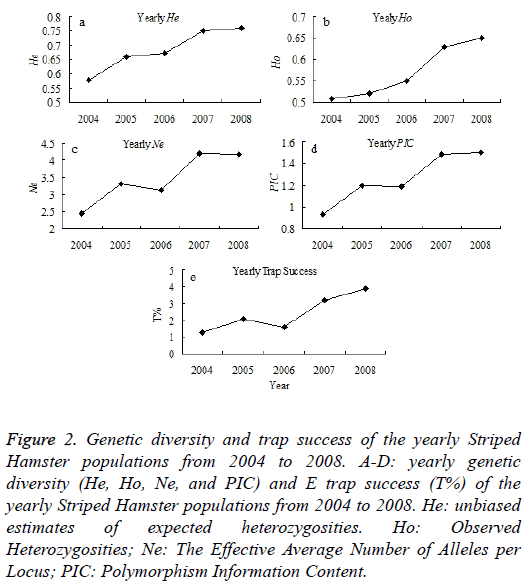 The genetic diversity of the spring and autumn populations 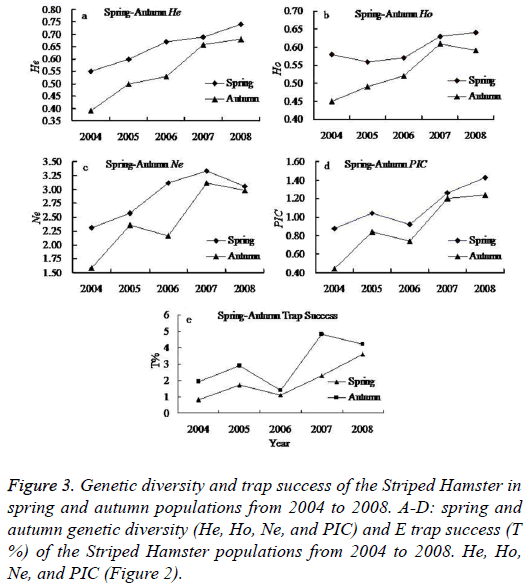 Relationship between the population density and the genetic diversity

Table 1: Pearson correlations between genetic diversity (Ne, PIC, He, and Ho) and trap success (T%) of the Striped Hamster in spring, autumn and the yearly populations.

The relationship between the population and genetic diversity has been studied in some short-term or low-density phases. Evidence from long-term and high density population is short. In this study, 298 samplings were collected and analysed from 2004-2008 in North China Plain. We found that the genetic diversity of the Striped Hamster is density and seasonal dependent. Previous studies showed that fluctuated populations had higher genetic diversity even at low population density [14,17,18].

Even at the low level of the population size for the cycle vole populations, high effective population sizes and heterozygosity also exist, dispersal may be the important factor to maintain high population genetic variation [19].

Besides, dispersal pattern [18,35], inbreeding avoidance and genetic drift can affect the genetic diversity of a population and influence its genetic structure [36]. Immigration can slow down the loss of genetic diversity [20], which lead to the accumulation of new alleles and contribute to the increasing of heterozygosity population.