General review on cardiac implants and study of the methods for reducing electromagnetic interference (EMI).

Human heart can produce pulses and electrical impulses based on electrical specialized cells and with the use of sympathetic and parasympathetic nerves, these beats can also be adjusted. Cardiac arrhythmias and heart disease affect the electrical activity of the heart and impair cardiac function. Therefore, medical equipment and various therapies should be used to improve cardiac function. The pacemaker is designed to produce pulses and regular beats for those whose heart does not function properly and does not have regular beats. Pacemakers and cardiac implants have several types that are inserted into the body of cardiac patients. The main elements of the pacemakers include generators, batteries, and leads, which generator to produce pulses and batteries to power the device and finally, the pulses produced through the leads are sent to the heart. The pacemakers are divided into different types based on the number of leads and catheters, each of which has its own function.

According to WHO reports and studies, cardiovascular disease is one of the major causes of death in the world [1,2]. The cardiac has millions of specialized cells that generate electrical impulses throughout the cardiac that produce these waves at the sinoatrial node (SA) that sinoatrial node is the pacemaker of the cardiac [3,4] (Figure 1). The electrical activity of the cardiac is due to the concentration and movement of sodium, potassium and calcium ions from the cell membrane, which causes an electrical difference [5,6] (Figure 2). Cardiac output is one of the cardiac parameters that is used to evaluate the function of the cardiac system. The amount of blood that goes out of the cardiac at each beat is equal to the stroke volume. When the heart rate is multiplied by the stroke volume, a cardiac output is obtained [7-9] (Figure 3). The heart rate is adjusted based on the sympathetic and parasympathetic nervous system [10,11] (Figure 4). 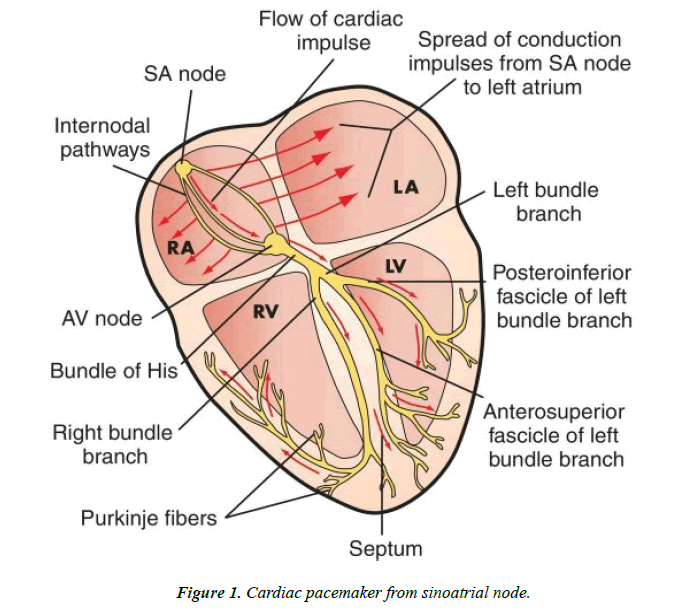 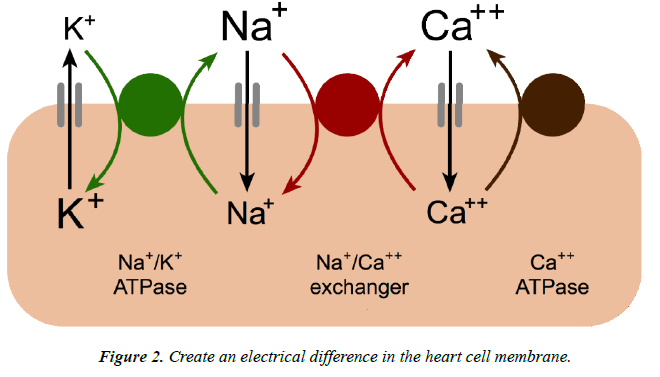 Figure 2: Create an electrical difference in the heart cell membrane. 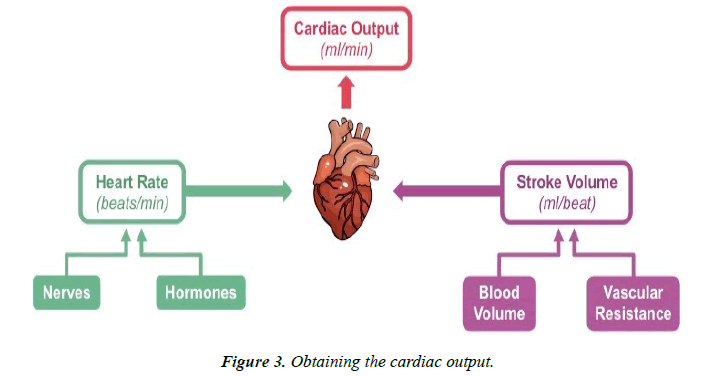 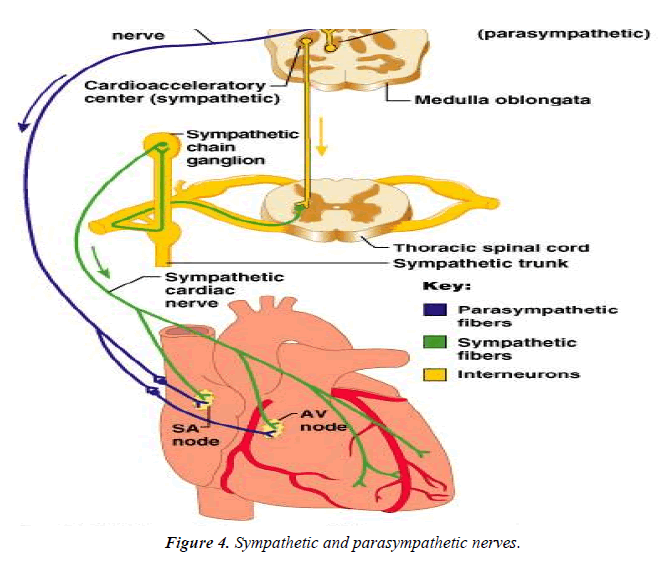 In some cases, the heart electrical system may have flaws and the heart has irregular and arrhythmic beats, which include tachycardia and bradycardia, and atrial fibrillation is one of the common cardiac arrhythmias. Various factors can cause these arrhythmias that include cardiac artery stenosis, cardiac valve diseases, blood pressure, abnormalities in metabolic glands, and so on [12,13].

There are various treatments for heart disease. One of the treatment methods for impaired electrical and heart rates is the use of Implantable Cardioverter Defibrillators (ICDs) and pacemakers, which is a very efficient and suitable method [14].

Examination of pacemakers and ICDs

Pacemaker is one of the vital medical devices that performs pacemaking heart function and is used for patients with cardiac diseases [15] (Figure 5). 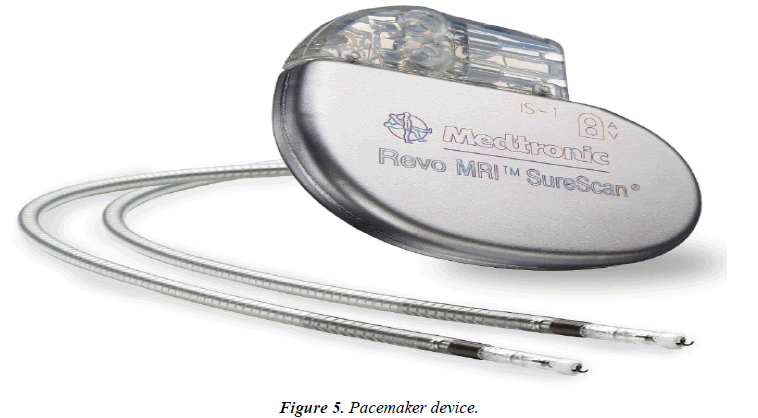 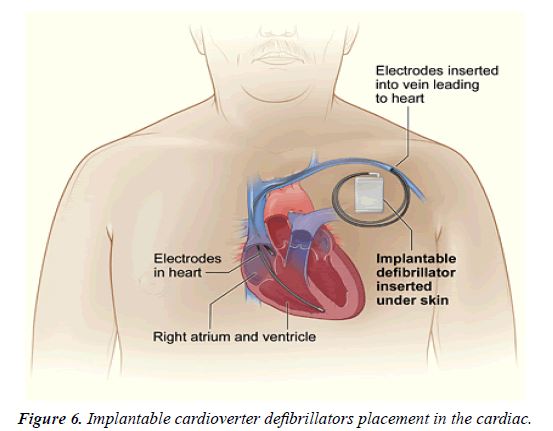 The pacemaker devices are small, and they have weighed too little, which are planted on the left side of the body and along the clavicle bone and under the skin, and the device's leads are placed in the vessels of the heart [20] (Figure 7). 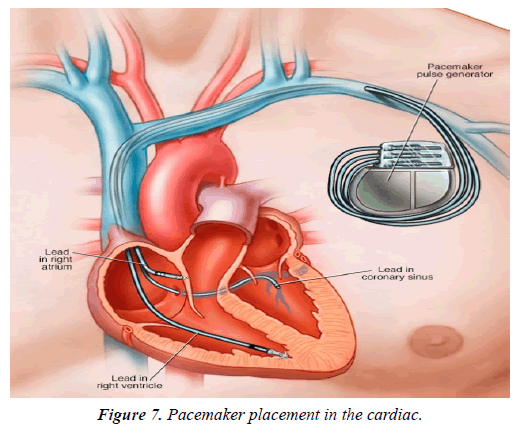 The pacemakers are divided into three general categories based on the number of leads. A single chamber is referred to a pacemaker that has a lead and this lead connects to the ventricle (Figure 8). The other pacemaker has two leads, the leads connect to the ventricle and atrium, and perform better than the first type and this kind of pacemaker is called the dual chamber [25,26] (Figure 9). The third type has three leads called Triple Chamber or Biventricular [27]. 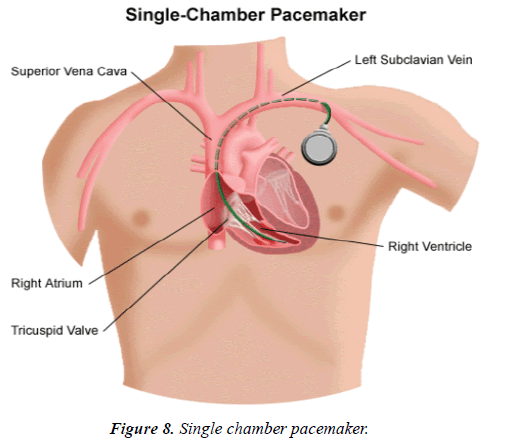 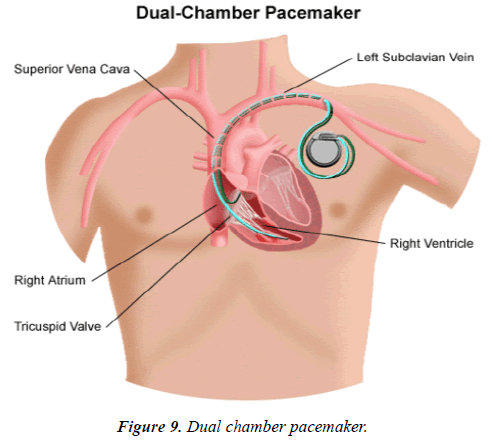 An expert physician evaluates the performance of the pacemaker using the ECG recorder, which examines electrical stimulation and impulses with regard to the ECG. The size of the curve derived from the ECG depends on several factors, including the number of leads and the electrical output of the pacemaker [31].

The pacemakers also have complications. These unwanted complications include damage to the vessels that causes bleeding or infection.

Various factors including electromagnetic field and high voltage electric field, flow leakage from electrical device, etc. can cause these interferences, which can cause the pulse generator to stop and cause damage to the pacemaker circuits [35,36]. Devices such as industrial generators, radiotherapy devices, MRI imaging device, etc. are sources of electrical and electromagnetic interference [37].

Today, methods have been proposed to prevent electromagnetic and electrical interferences on pacemakers, which will further explore these interferences and methods of reducing interferences.

Electromagnetic interference has various sources that include electrostatic discharge, sun, thunderbolt, electronic equipment, electromechanical circuits, and so on [41].

Reducing electromagnetic interference on the performance of the pacemakers

Now-a-days, using in vitro methods, can be test and investigate the effects of electric and magnetic fields on pacemakers [42]. In some studies, experts have been able to experiment of electromagnetic interference using numerical simulation of the anatomical human body in the form of real with the insertion of a cardiac implant [43].

In one of these studies, the phantom used in experiment resembles a glass funnel that has a height of 35.2 cm and is filled with a salt solution, and the end of the funnel has a metal that connects to the ground (Figure 10). This phantom is then placed in a bench that produces a high voltage electric field, and this phantom is examined under the influence of electric and magnetic waves [44]. 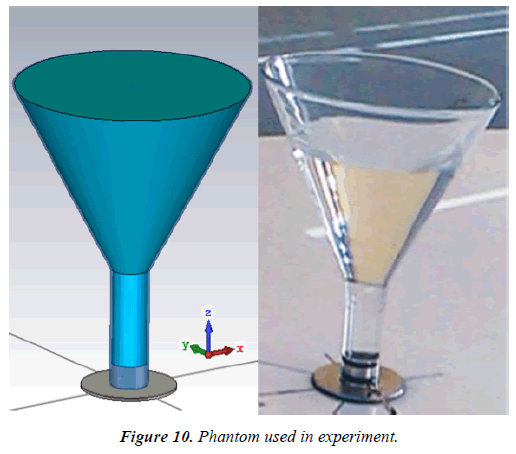 In other studies, using finite integral technic, anatomical human body was placed in a field of 50 Hz and the effects of this field on the pacemaker on this model were investigated and therefore the voltage interference in unipolar and bipolar mode [45].

By using protective coatings (shielding) made up of polyaniline films, the effect of electromagnetic interference on pacemaker can be reduced. These films are made of emeraldine salt, which are obtained using materials as a base on polyethylene terephthalate film [49].

One of the ways to reduce electromagnetic interference is the use of RFID (Radio Frequency Identification) technology. RFID systems can create and transmit periodic signals. This system has a signal transmission period and a stop period. Signals of the system during the stopping period can reduce the magnetic signals that cause interference. As a result, the magnetic signal passes through a very low frequency, and electromagnetic interferences are reduced [50] (Figure 11). 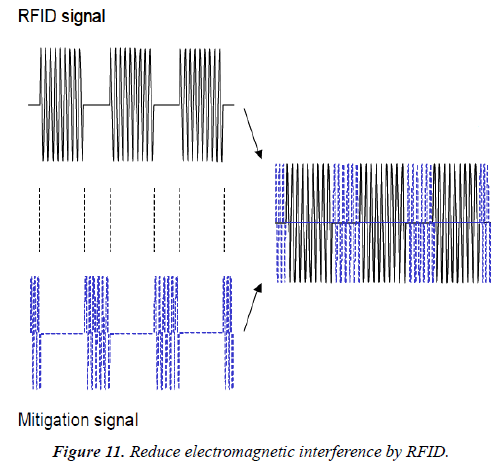