Extra-mammary tumour metastases to the breast are extremely rare accounting for less than 2% of all breast lesions. Breast secondaries were reported with lymphoma, melanoma, ovarian carcinoma, renal cell carcinoma, colonic adenocarcinoma and gastric carcinoma. Stomach cancer metastases to the breast are very rare, with an incidence believed to be around 2.1% of all breast secondaries. The presentation is usually quite similar to breast primary; therefore clinicians need to keep an open mind when discussing histology as additional immune-histo-pathological tests are usually necessary to fully diagnose the cancer. Our case was a 55-years-old female who was treated for gastric signet ring carcinoma in 2013. She was referred to our breast clinic three years post curative surgical and chemotherapeutic management of her stomach cancer with a right breast lump with oedema and thickening of the overlying skin. She was thought to have inflammatory breast carcinoma; however, further histological tests demonstrated signet ring cells consistent with metastatic gastric carcinoma. Radiological staging tests confirmed single isolated breast secondary with no other metastatic lesions. To best of our knowledge, this is the only case of isolated breast secondary from gastric tumour. In this report, we reviewed the literature; discussed patient presentation and management, including breast metastectectomy. Keywords: Gastric carcinoma,

Breast cancer metastasis is common however metastatic disease is rarely seen in the breast. Gastric cancer metastasis to the breast is extremely rare, with only about 38 cases reported in literature to date since 1908 [1]. Despite being quite rare, the possibility of metastatic disease should be considered when assessing breast masses, which occur in patients with previous cancer history. Correct diagnosis as extramammary metastasis is essential as the treatment options differ to that of primary breast cancer. Clinicians need to keep an open mind when discussing histology, as additional immune-histo-pathological testing is usually necessary to fully diagnose the type of cancer involved.

In this report, we present a gastric cancer recurring three years after curative treatment as an isolated malignant breast lump.

A 55-year-old female was referred to the Mid-Western Breast Unit complaining of hard lump in her right breast for the past two and a half weeks. She has history of gastric signet ring cell carcinoma (pT3N2M0) in 2013 treated by total gastrectomy, Roux-en-Y, splenectomy for an infarcted spleen as well as modified McDonald adjuvant regimen; radiotherapy and chemotherapy with Capecitabine. Histology revealed an infiltrating poorly differentiated adenocarcinoma with 8 positive lymph nodes out of the 16 resected. She was three years’ post-curative surgical and chemotherapeutic management of her stomach cancer when she noticed this breast lump.

Physical examination revealed a highly suspicious two centimeter mass in the right breast associated with nipple inversion, edema and thickening of the overlying skin. The left breast and both axillae were normal on examination. 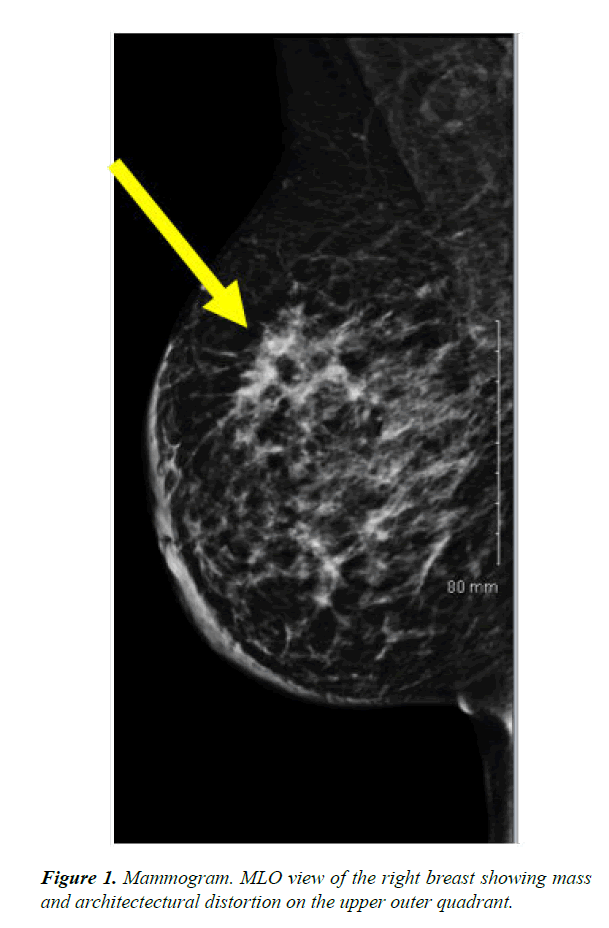 After MDM discussion, the patient underwent neo-adjuvant radiotherapy and chemotherapy with 6 cycles of ACT of which there was a partial response. She then underwent right mastectomy with no axillary procedure, as it was not indicated. The patient had an uneventful post-operative course and her wounds healed well on review.

According to the National Cancer Registry Ireland, it is estimated that 1 in 10 women will develop breast cancer before their 75th birthday. While breast cancer remains the second most common type of cancer in women, extra-mammary tumour metastases to the breast are extremely rare, accounting for less than 2% of all breast lesions [2]. Breast secondaries were reported with lymphoma, melanoma, ovarian carcinoma, colonic adenocarcinoma and gastric carcinoma. Stomach cancer metastases to the breast are very rare, with an incidence believed to be around 2% of all breast secondaries.

Misdiagnosis of breast secondaries as a primary cancer is common [3]. The importance of the distinction is to ensure that the most appropriate management plan is considered for the patient. The presence of metastasis is indication of systemic disease and therefore requires systemic treatment with additional therapies to surgical resection. Prognosis in these cases is generally poor as it is usually indicative of extensive metastatic disease, with a high mortality rate. The median survival from the time of breast metastasis diagnosis is about 10 months [4].

While the mechanisms behind breast metastasis from gastric cancer remains controversial. It has been suggested that there is a higher incidence of metastasis in premenopausal women potentially due to the increased blood supply to the breast in this particular group [1,6]. It has also been proposed that hormonal factors have a role to play in promoting adhesion and growth of breast metastases from gastric cancer [7].

Immunohistochemical testing of the cancer cells can be beneficial in determining the primary origin. While the presence of ER and PR in breast cancer is well known, it has been shown that up to 20% of gastric cancers have been ER positive [8]. A combination of the use of ER and CK20 staining has been proven useful in determining if the metastatic carcinoma is originating from the gastrointestinal tract or from mammary tissue [9], GCFP-15 has been widely used as a marker for breast carcinoma. Immunostaining with GCFP-15 has been shown to have specificity of up to 95% in the detection of breast cancer [10]. Our patient was seen to be CK20 positive and unreactive to GCFP-15, which would add validity to the primary origin being from the gastrointestinal tract.

Isolated single metastectomy was shown to improve patient outcomes. Reports showed that it increased survival and reduced mortality by up to 88% [11]. Surgical management usually involves conservative management with wide local excision, however as in the case with our patient, mastectomy is required for large bulky tumours [12]. While surgery is often the treatment of choice for these patients, the focus needs to remain on the treatment of the primary origin of the cancer [12]. Systemic chemotherapy has been shown to improve the prognosis of patients with breast secondaries6, as is the case with our patient.