The strawberries and their phytochemicals are beneficial during cancer, infections, obesity, neurological and cardiovascular diseases (CVD). The present study explores the effect of freeze dried strawberry powder (FSP) on alloxan induced hyperlipidemia in albino rats. Alloxan (150mg/ kg bw) induced diabetic animals treated with FSP (700 mg/kg bw for 45 days) were analyzed for serum lipid profile and lipid content of liver and kidney tissues. The alloxan induced elevated levels of serum total cholesterol (TC) (49.60%), triglycerides(TG) (95.99%), phospholipids (PL) (81.99%), LDL-C (101%), VLDL-C (98.26%) and declined level of HDL-C (30.89 %) were significantly (p<0.05) reverted to their near normal values by FSP treatment. Similar reversal of liver and kidney TC, TG and PL were also observed by FSP administration. The high polyphenolic antioxidant contents of FSP are the key factors for the amelioration of diabetic hyperlipidemia.

Diabetes and secondary diabetic complications are the global health issues. The increasing diabetic population would reach 552 million by 2030 [1]. Diabetes mellitus is due to either insufficient insulin secretion and/ or inability of the cells to respond to the secreted insulin [2]. The glucose build up in the blood leads to various secondary diabetic complications such as cardiovascular diseases, retinopathy, and nephropathy. The excessive load of free radicals generated during diabetes affects various target organs such as pancreas, liver, kidney, and heart. The antioxidant defenses of the organs are insufficient to neutralize the toxic effect of free radicals generated during diabetes [3]. Therefore, adequate supply of natural antioxidants either in the form of dietary supplement or as a therapeutic measure would be effective in control and maintenance of diabetic complications [3]. Natural Plant products with antioxidant contents are highly beneficial in this regard.

Fragaria x ananassa (strawberry) is a healthy food choice and has high antioxidant phytochemicals. The strawberry fruits are rich in vitamins, minerals, folate, and dietary fibers. A complex mixture of various polyphenolic compounds such as flavonoids, phenolic acids, tannins, anthocyanins and ellagitannins are present in strawberries [4-5]. These phytochemicals, either individual or in combination are responsible for the antioxidant properties of strawberries [6]. The antioxidant properties of strawberries are well established in both in vitro and in vivo models [7-8]. Strawberries are effective natural food source for the protection against harmful substances and diseases [3,5-6,9]. Array of reports have indicated that, consumption of strawberry is often associated with decreased incidence of various chronic pathological conditions including cancer, infections, obesity, neurological and cardiovascular diseases [10-11].

Strawberries and their preparations are available in various forms such as frozen and dried fruits, jams, jellies, nectars, and juice concentrates. Freeze-dried strawberry powder (FSP) is one of the processed forms of strawberry with high commercial value and increased shelf life. The phytochemical content of strawberry is highly preserved and retained in FSP. The FSP is the best form of processed strawberry and has high total antioxidant capacity [12,13]. Consumption of FSP lowers the lipid levels in cardio vascular disease (CVD) and has promising effects in metabolic syndrome and diabetes [5,14-16].

Therefore, the present investigation was designed to explore the potential of freeze dried strawberry powder against hyperlipidemia in alloxan induced diabetic rats.

Adult male albino rats of wistar strain weighing around 150 to 180g were used for the experiments. The animals were housed in polypropylene cage over husk bedding. Twelve hour light and dark cycle was maintained in the animal house. High quality rat feed was adequately supplied to the experimental animals and water ad libitum. All animal experiments were carried out in strict accordance with the ethical norms approved by Institutional Animal Ethics Committee (IAEC) of the Shaqra University, Kingdom of Saudi Arabia.

Diabetes was induced in male wister albino rats by intraperitoneal injection of single dose alloxan monohydrate (150mg/kg bw) in normal saline [17]. After two days of alloxan induction the rats were screened for diabetes and animals having glycosuria and hyperglycemia with blood glucose level of 250-350 mg/dL were taken for the study. Treatment with FSP was started after 48 hours of alloxan injection for the period of 45 days.

The animals were divided into following four groups comprising 6 animals in each group.

The FSP and drug glibenclamide were given in water daily using an intragastric tube for 45 days.

At the end of experimental period, the animals were fasted overnight and sacrificed by cervical decapitation. . Blood was collected without anticoagulant for serum separation. The liver and kidney tissues were dissected out, washed in ice-cold physiological saline to remove the blood stains, and patted dry. Tissue samples were accurately weighed and homogenized separately using tris-Hcl buffer (0.1M, pH 7.4) and the homogenate was centrifuged at 2500 rpm for 30 min at 4°C. The supernatant was used for analysis.

Data analysis was performed by using Statistical Package for Social Sciences (SPSS Inc., Chicago, IL) Version 16 for windows. One-way analysis of variance (ANOVA) and least significant difference (LSD) were performed with assumed level of significance P< 0.05 between the control and different group of animals. The results are expressed as mean ±SD for six animals in each group.

Table 1 indicates the alterations of serum lipid profile in different groups of experimental animals. The elevated levels of TC (49.60%), TG (95.99%), PL (81.99%), LDLC (101%), and VLDL-C (98.26%) were noted in group 2 animals. However, HDL-C levels showed 30.89 % decline in diabetic group over the control ones. The 45 days of oral administration with FSP restored these deranged levels to their near normal condition in group 3 animals with a statistical significant value of p<0.05.

Table 1: Effect of FSP on serum lipid profile in control and experimental group of animals 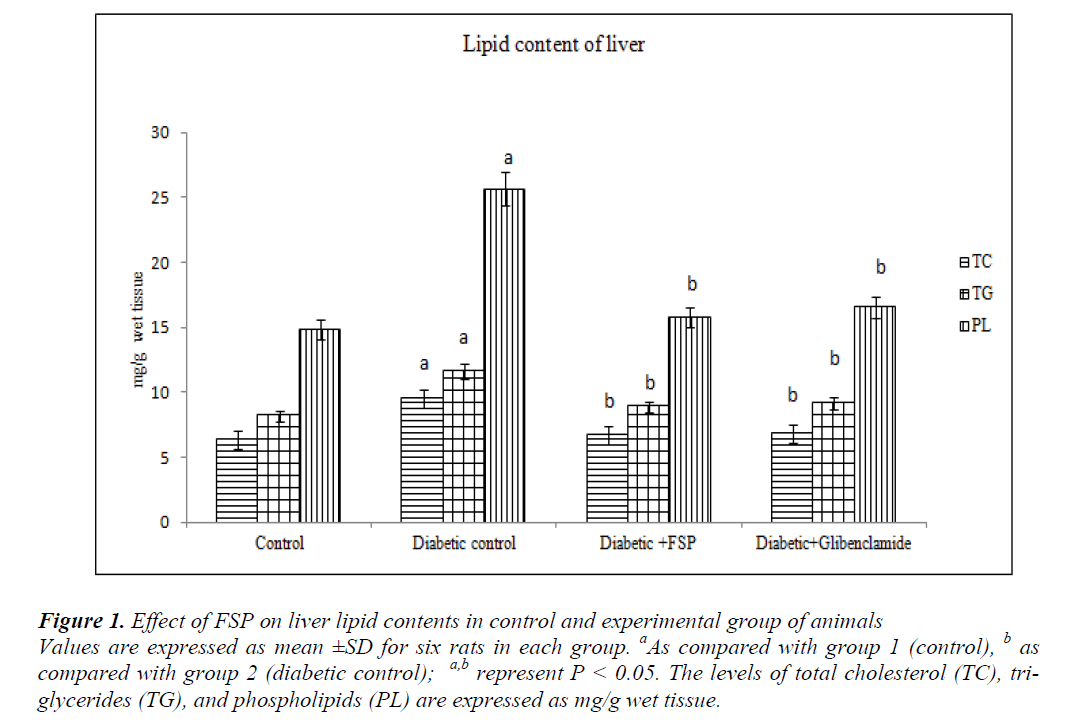 Figure 1: Effect of FSP on liver lipid contents in control and experimental group of animals 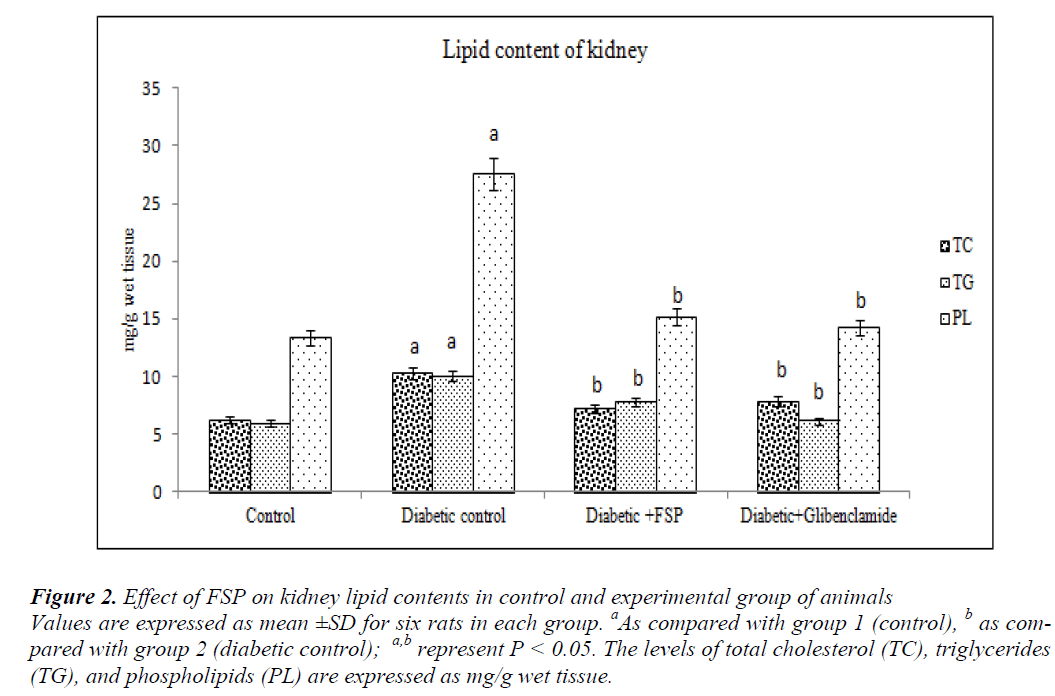 Figure 2: Effect of FSP on kidney lipid contents in control and experimental group of animals

Hyperlipidemia is one of the clinical features of alloxan diabetes and high concentrations of serum lipids in the present study confirm this secondary diabetic complication [20]. The alloxan mediated free radicals induce lipid peroxidation, and damage membrane architecture of liver and kidney to release membrane phospholipids. Alloxan toxicity also leads to abnormal accumulation triglycerides in liver and kidney [20]. The increased cholesterol levels may be mainly due to the increased activity of HMG-CoA reductase which is a rate limiting factor in the cholesterol biosynthesis [21]. The increased hepatic secretion of VLDL is due to high levels of free fatty acids and hyperglycemia during diabetes. Reduced activities of lipid metabolizing enzymes such as lipoprotein lipase (LPL) and lecithin cholesterol acyl tranferase (LCAT) are the feature of free radical mediated organ injuries [22]. Reduction in the activity of lipoprotein lipase (LPL) results in the decreased clearance of VLDL and LDL. Poor clearance results in the accumulation of these lipoproteins and reduction in the level of HDL in serum. The alloxan induced lipid abnormalities and lipoprotein deviations during diabetes are well normalized by the oral administration of FSP for 45 days in the present study.

In the current decade strawberry based health benefits are being explored and correlated to their antioxidant constituents. Strawberry preparations and FSP consumption have been shown to anti hyperlipidemic in both animal and human models [5,7,23]. Moreover, ellagic acid and other polyphenols of strawberry are shown to reduce TG and TC in serum [23]. Strawberry polyphenols are effective inhibitors of pancreatic lipase, an enzyme responsible for breakdown of fat into free fatty acids and thus reduce the lipid contents of serum. The hypolipidemic mechanism of FSP may be due to its ability to decrease fat digestion and absorption in the gastrointestinal tract and suppress endogenous cholesterol biosynthesis. The high level of vitamin C, antioxidant phytochemicals and in part the soluble fiber content of strawberry [7,13,16] are responsible for the amelioration of serum and tissue lipids during alloxan induced diabetes in rats.

The promising health benefits of strawberries encouraged the present investigation to evaluate the efficacy of FSP against hyperlipidemia in alloxan induced diabetic rats. The results of this study clearly suggest that FSP is effective in controlling hyperlipidemia during diabetes. The high polyphenolic antioxidant contents of FSP are the key factors for the amelioration of diabetic hyperlipidemia.

The author declares that there are no conflicts of interest.

The author registers his sincere thanks to Dr. Asad Babu Ph.D., for his help during animal handling.