Although serum Prostate Specific Antigen (PSA) has greatly improved the detection of human prostate cancer (PCa), one limitation of the test is that increased serum PSA is also associated with other benign prostate conditions. Biopsy specimens and clinical data from patients at risk for PCa (n=303) were retrospectively analysed by PSA density (PSAD) and fPSAD. Receiver Operating Characteristic (ROC) curves were used to calculate the areas under the ROC curves (AUCs) and to determine sensitivity and specificity of the various PSA parameters in the detection of PCa. The cohort included cases of PCa (n=112; 37.0%) and benign prostatic hyperplasia (BPH; n=191; 63.0%). The mean age, total prostate volume, tPSA, PSA (%), PSAD and fPSAD of patients diagnosed with PCa were significantly higher than in patients with BPH (P<0.05). The AUCs for tPSA, PSA (%), PSAD and fPSAD were 85.6%, 33.1%, 89.6% and 84.9%, respectively. The threshold value of 0.033 for fPSAD had a maximum Youden’s index of 0.675, a sensitivity of 75.9% and a specificity of 91.6%. The agreement of fPSAD with histological diagnosis at 85.8% was the highest compared to tPSA, PSA (%) or PSAD. In conclusion, the results demonstrated fPSAD as having discriminative predictive power for diagnosis of PCa.

Prostate Cancer (PCa) is the most common malignancy of the male reproductive system [1]. Prostate-Specific Antigen (PSA) is the most widely used test to detect potential malignancy; however, as a marker, PSA is organ- but not cancer-specific. Many other pathologies of the prostate, such as acute and chronic prostatitis and Benign Prostatic Hyperplasia (BPH), will lead to increases in PSA levels [2].

Current recommendations for the use of serum PSA in the diagnosis of PCa often lead to over-treatment and are associated morbidity due to unnecessary biopsies [3]. Large studies carried out for the early detection of PCa have shown that almost 70% of cancer cases can be identified with a PSA threshold of 4.0 ng/ml. However, in practice, at a serum PSA threshold of 4.0 ng/ml, 20 to 25% of PCa cases are not detected (false-negative), and the false-positive rate is as high as 65%. To improve the utility of serum PSA for identifying patients who require biopsy, the serum PSA threshold has been lowered to 2 ng/ml. In addition, the levels of free and bound PSA have been assessed, together with PSA density (the ratio of PSA over the prostate volume; PSAD) and PSA velocity (the rate of the increase in PSA over time), which seem to have some validity for detecting PCa.

In recent years, many studies have confirmed that PSAD improves the prediction of PCa [4,5], and many urologists have advocated normalizing the PSA with the volume of the prostate gland. In our institution, we also noticed that the free prostate specific antigen density (the ratio of free PSA over the prostate volume; fPSAD) demonstrated a higher sensitivity and specificity in predicting the presence of PCa at prostate biopsy. However, few studies have addressed the value of fPSAD in diagnosing PCa. Here, the diagnostic and prognostic predictive value of fPSAD in the detection of PCa was investigated.

Written consent was obtained from all patients for procedures approved by the ethics committee at the Third People's Hospital.

tPSA and fPSA: Serum tPSA and fPSA were determined with TPSA-RIACT and FPSA-RIACT kits (CIS-Bio International, Codolet, France), respectively. These assays are immunoradiometric sandwich-type assays, each made with two different mouse monoclonal antibodies; the solid phase involves a coated tube and the tracer iodine 125. The results are expressed in ng/ml for tPSA and FPSA.

Transrectal ultrasound-guided biopsy of the prostate was performed in order to collect core biopsy specimens (n=13) with an 18 G needle. 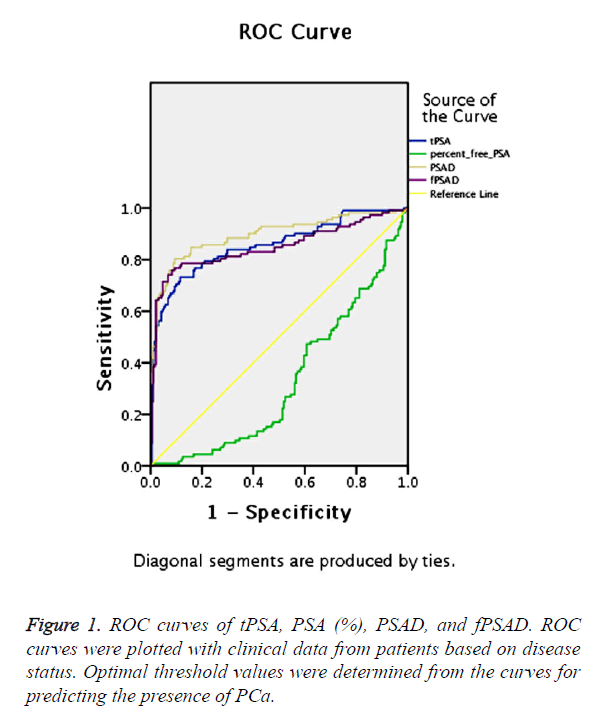 Figure 1. ROC curves of tPSA, PSA (%), PSAD, and fPSAD. ROC curves were plotted with clinical data from patients based on disease status. Optimal threshold values were determined from the curves for predicting the presence of PCa.

In order to increase the specificity of biopsy and to avoid unnecessary procedures, the ROC curves were used to derive optimal thresholds for predicting malignancy with each of the clinical parameters. Thresholds of 4.0 ng/ml, 20%, 0.15 ng/ml, and 0.033 ng/ml for tPSA, PSA (%), PSAD and fPSAD, respectively, were the most accurate in predicting a positive (malignant) biopsy for each of the tests (Table 2). The sensitivity and specificity of the tests and concordance with the diagnosis at these optimal thresholds are shown in Table 2. The results indicated that fPSAD displayed the highest accuracy in the diagnosis of malignancy.

Serum PSA is the most commonly used PCa screening index, and its application has greatly improved the detection rate of the disease. The test still has certain limitations, in large part due to the fact that PSA is specific for prostate tissue but not cancer. When a tumor or other lesions lead to damage within the cortex, basal cell layer or basement membrane barrier layers of prostate, PSA is released into the lymphatic system, and eventually enters into the blood circulation, leading to a rise in peripheral blood PSA levels. Benign prostatic hyperplasia, prostatitis and digital rectal or cystoscopy can also cause the serum PSA to increase significantly. Thus, at certain PSA values, especially in the gray zone of 4-10 ng/ml, hyperplasia of the prostate and malignancy will overlap, so that a diagnosis of PCa is made. Therefore, new indicators are urgently needed for more accurate clinical diagnosis of PCa.

Biopsy of the prostate is currently the gold standard for diagnosis of PCa when abnormal serum PSA tests occur. Serum PSA, however, occurs in a free and a bound state and studies indicate that PSA (%) has diagnostic value, especially for the PSA in the gray area [6]. Studies have confirmed a threshold value for the diagnostic utility of PSA (%) as between 0.12 and 0.25 [7]. The guidelines for the diagnosis and treatment of PCa in China recommend that PSA (%)<0.15 is an indication for prostate biopsy. The results of our study demonstrated that significant differences in the PSA (%) exist between the PCa and BPH groups. However, ROC analysis demonstrated that the AUC of PSA (%) is 33.1%, which indicates that PSA (%) is not of diagnostic value for the detection of PCa. In fact, at a threshold value of 0.15, PSA (%) diagnostic sensitivity and specificity were 93.75% and 25.13%, respectively.

Further complicating diagnosis is the fact that PCa can lead directly to increased serum PSA, which is not dependent on the volume of the prostate [8], while BPH increases serum PSA mainly through increased volume of the prostate. In view of these findings, a PSAD of >0.15 ng/ml has been proposed to be an indicator of an increased risk of PCa, and this cut-off value currently serves nationally as a guideline in the diagnosis and treatment of PCa [9]. The diagnosis of PCa by the PSAD threshold remains controversial, however. In this study, clinical data from 303 cases of PCa were analysed, and the results demonstrated that at a PSAD of >0.15, the sensitivity and the specificity for diagnosis of malignancy were 86.6% and 71.2%, respectively. The ROC analysis performed here, therefore, confirmed the current view, that PSAD is superior to PSA (%) in diagnosis of PCa [10].

Currently, there are no studies investigating the value of fPSAD in the diagnosis of PCa. Therefore, the tPSA, PSA (%), PSAD and fPSAD were retrospectively analysed to investigate the potential benefit of any one of these tests in the diagnosis of PCa. Surprisingly, the results revealed that fPSAD had better diagnostic power than tPSA, PSA (%) or PSAD. Our analyses demonstrated that at a threshold value of 0.033 for fPSAD, the sensitivity and the specificity were 75.9% and 91.6%, respectively, and agreement with histological diagnosis was 85.8%. fPSAD demonstrated the highest specificity, indicating that routine incorporation of fPSAD into the clinical work-up of patients may reduce the incidence of misdiagnosis as well as unnecessary prostate biopsies.

However, there are still some shortcomings to the study, as no follow-up of the patients has been undertaken. The possible occurrence of PCa during follow-up in patients, who initially presented with a negative biopsy, cannot be excluded. Moreover, the number of cases was small, and institutional experience in the implementation of these tests was lacking. In future studies, clinical data collected at the primary diagnosis will be complemented with follow-up of the patients.

fPSAD was superior to tPSA, PSA (%) and PSAD as a predictor of PCa. With an optimal cut-off of 0.033 ng/ml for fPSAD, an acceptable positive rate of PCa detection can be achieved while unnecessary prostate biopsies can be avoided.