The Fine-Needle Aspiration Cytology (FNAC) of salivary glands provides essential information in making clinical decisions. The purpose of this study is to assess the efficacy of FNAC in the pre-surgical diagnosis of salivary glands, comparing it to the final histopathological study. FNACs and biopsies collected from patients from 2000-2013 period, were compared finding a total of 433 salivary gland lesions. Of the 433 salivary gland lesions in our study, FNAC was developed on just 22.8% of lesions, 96.9% were satisfactory. 78 benign and 17 malignant lesions were diagnosed. In the histopathological study of lesions, 80 were diagnosed as benign and 18 as malignant. We found 14 true positive cases, 74 true negatives, 3 false positives and 4 false negatives. The diagnostic indexes included a FNAC sensitivity of 77% and a specificity of 96.1%. A Positive Predictive Value (PPV) of 82.35% and a Negative Predictive Value (NPV) of 94.8%. For the diagnosis of salivary gland lesions, FNAC showed high sensitivity and specificity in our sample, and the level of agreement between the FNAC diagnosis and the final diagnosis is good.

The Fine-Needle Aspiration Cytology (FNAC) of salivary glands provides essential information in making clinical decisions for their appropriate treatment [1]. It is a simple technique that is easy to perform, cheap and rarely has complications [2-4].

Efficiency of FNAC is questioned by some authors and defended by another [3,5]. Layfield et al. [6] conducted a study on cost-effectiveness in regards to the FNAC of salivary glands and show that the fine-needle aspiration cytology can avoid the need for surgery by 35% of the masses diagnosed in the parotid gland.

FNAC surely distinguish between inflammatory lesions, which don't require a surgical procedure, and neoplastic lesions, differentiating between benign and malignant tumors, allowing the establishment of protocols of action on salivary gland tumors [7-9].

Low sensitivity and negative predictive value in screening tests can be attributed to the difficulty in diagnosis of low degree carcinomas, solely due to cell morphology [10].

Although FNAC is globally accepted as a pre-surgical technique in head and neck tumors, its effectiveness in neoplastic lesions of salivary glands is controversial due to the low sensitivity reported by some authors, who question its efficacy.

The purpose of this study is to assess the efficacy of FNAC in the pre-surgical diagnosis of salivary, parotid and submaxillary glands, comparing it to the final histopathological diagnosis of the surgical piece.

Samples from the Pathological Anatomy Unit of the Santiago de Compostela Teaching Hospital were searched. Biopsies and FNACs from major and minor salivary glands had been collected during the 2000-2013 period, which means a total of 13 years of follow-up, finding samples from a total of 580 patients.

Exclusion criteria included: metastasis of primary tumors in other locations, studies in which the main lesion belonged to a tissue that didn't belong to the salivary gland due to the proximity of the sample to healthy gland tissue and, lastly, we unified the biopsies of the same lesion of the same patient but had been referenced as different anatomical and pathologic studies.

After exclusions, we had 433 studies from which we selected the biopsies of lesions of salivary glands, exclusively, since some of them presented several biopsy samples. In total, to develop the analysis of data we had a sample 433 biopsies of salivary glands which correspond to a study population of 433 patients, Caucasian, of which 179 were men and 254 were women (41.3% men and 58.7% women), the gender ratio was 1.41:1 in favor of women, with ages comprehended between 3 and 97 y, and the average age was 51.29 y (with a standard deviation of 17.34 y).

Variables analysed were: gender, ages of patients at the time of diagnosis of the lesion, development or not of the FNAC on the lesion, prior to the biopsy, cytologic diagnosis through FNAC, diagnosis of clinical suspicion, histologic variability of the tumor in its definitive diagnosis (WHO, WHO classification of salivary gland tumors 2005).

All procedures were carried out with the adequate understanding and written consent of the subjects.

This study has received the approval of ethical committee of University Hospital and School of Medicine of Santiago de Compostela. 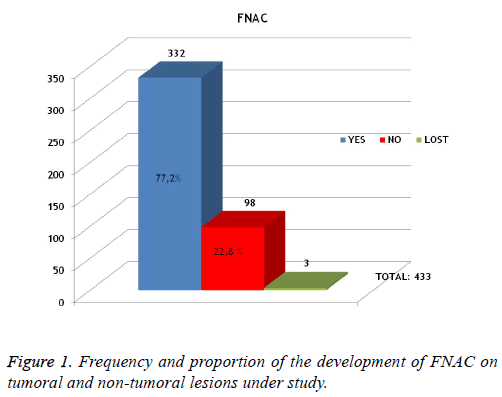 Figure 1: Frequency and proportion of the development of FNAC on tumoral and non-tumoral lesions under study.

Cyto-histologic correlation in the diagnosis with FNAC

96.9% (95) of the total FNACs (98) were satisfactory and allowed to develop a cytologic diagnosis; the other 3 cases (3.1%) were not diagnostic, the sample of these three lesions was insufficient to develop a correct diagnosis. 78 benign and 17 malignant lesions were diagnosed through cytology. In the histopathological study of lesions, 80 were diagnosed as benign and 18 as malignant.

Of the 4 false negatives, two were diagnosed as pleomorph adenomas in the cytology, histologically, these resulted in a mucoepidermoid carcinoma and a NOS adenocarcinoma: another one was diagnosed as a Warthin tumor which was an ancinar cell carcinoma; and lastly a reactive lymphadenitis that turned out to be a Hodgkin lymphoma.

Of the 3 false positives, two were lymphomas, which histologically were a non-pathological lesion and a sialadenitis; whereas the third case was an epidermoid carcinoma that turned out being a Warthin tumor.

FNAC was only developed in the 22.8% of all cases due to the fact that the FNAC was not conducted when the practitioner strongly believed it was a tumor.

From the total lesions of our study (433), only 98, 22.8% underwent diagnosis by FNAC, the percentage of nondiagnostic FNACs is very low, just 2% in comparison to other studies in which FNAC is developed systematically in all lesions [11]. Therefore, the clinician must determine the need to develop a FNAC following the direct examination of the lesion and the development of additional tests, applying this protocol the number of non-diagnostic FNACs is reduced in most of the studies we reviewed [12].

In the current reviewed literature, sensitivity reached a range between 86.6% and 57.1%, and specificity between 99% and 91% [3,11-14] (Table 1). The meta-analysis developed by Schmidt et al. [15], in which they analysed a total of 6169 cases, shows a sensitivity and a specificity of 80% and 97%, respectively, values that were very similar to those we obtained in our study (77% sensitivity and 96% specificity). Our high sensitivity level is similar to those values found in the literature, except for one study that found values of 57.1%. The authors justify these low values arguing that the FNACs and the anatomical and pathological studies were not developed by a sole operator. In our study, the FNACs were developed by maxillofacial surgeons from the Santiago de Compostela Teaching Hospital and, although it was always the same Pathological Anatomy Unit of the same hospital, the sampling wasn't developed by the same pathologist.

Table 1. Comparison between results of this study and former studies.

There are different reasons for these variables, it is very hard to compare data of different studies due to the methods developed in the classification of patients, their analysis and their results. In many cases, the studies analysed parotid gland lesions, however, in our study we included also cases from the submaxillary gland. Other studies included cases with clinical suspicion of malignancy, this inclusion criteria affected sensitivity, specificity and the concordance level; on the other hand, there also are studies that include the FNACs developed routinely on all tumoral lesions and the resulting percentage of malignant tumors was very low [11].

In regards to false positives, there are studies showing that the definitive diagnosis of the lesion was a Warthin tumor in most cases, since many times they present metaplastic changes in the epithelium [14]. In our sample, we only found one Warthin tumor among the three false positives. The other two cases corresponded to non-pathological or inflammatory processes.

Different series shows that the rate of false negatives amounts from 13% to 29% [16], we found a rate of 23%. In general, malignant tumors of salivary glands can be hard to diagnose for the pathologist, tumors have a low incidence and there is a large/huge variety of different histologic patterns. It has been published that acinar cell carcinomas are usually erroneously interpreted as a benign lesions by cytology [12,17], as shown in different FNAC publications which were able to diagnose only 68% of this type of carcinomas [18]. In our study we solely determined one case of ancinar cell carcinomas among 4 false negatives, which were interpreted as a Warthin tumor in the cytology.

In our study the PPV was 82.35%, implying that a FNAC reported as malignant was actually a benign lesion in 17.65% of cases. On the other hand, the NPV was 94.8%. Reviewing the literature, we find studies with similar results that support our findings. Specifically, we must highlight the difference with the study by Zerpa et al. [14] with a PPV of 50%, this unusually low value is justifiable since the number of malignant tumors in their series is below 8%.

In conclusion, for the diagnosis of salivary gland lesions, FNAC showed high sensitivity and specificity in our sample, and the level of agreement between the FNAC diagnosis and the final diagnosis is good. Therefore, it is a useful and simple tool to study these lesions, and serves as an orientation for diagnosis and the individual planning of each case.