Fibrinogen-like protein 2 (Fgl2)/fibroleukin has recently been identified as a new member of fibrinogen-related protein superfamily, with the serine protease activity. The biological activity of Fgl2 prothrombinase, similar to coagulating factor Xa, can directly catalyze prothrombinase into activated thrombinase, thereby, initiating a cascade coagulating reaction[1]. Several studies indicate that Fgl2 is involved in pathological changes such as immune coagulation, fibrin deposition, and micro-thrombus[2]. In addition to its primary role in homeostasis and blood coagulation, thrombin is a potent mitogen that dramatically increases the growth and metastasis potential of tumor cells. Fgl2 functions as a novel immune coagulant with the ability to generate thrombin directly,and may be involved in angiogenesis[3].

In the present study, we constructed a lentiviral RNA interferenced vector of human fibrinogen-like protein 2(hFgl2) gene. Myocardial Microvascular Endothelial Cells (MMVECs) were transfected by lentiviral vector.To investigate how Fgl2 gene silence affects the proliferation and migration of MMVECs and whether angiopoietin/Tie system activation involved or not.

This study is an experimental study and has been approved by the the first afficiated Hospital of Nanchang University Research and Ethical Committee. The study duration is from 12 september 2009 to 30 May 2011, approximately 20 months.

Hearts were excised from Sprague-Dawley (SD) rats of seven days old under aseptic conditions. Cardiac ventricles were cleaned by sterilized Hank’s solution and then cut into pieces. A homogenate of ventricles was suspended and filtered by sequential 200 μm and 60 μm microfiltration. The filtered cells were cultured in culture flasks (75 cm2) at 37 °C in a humidified atmosphere with 5% CO2 in endothelial cell growth medium (ECGM), as supplied by the manufacturer, supplemented with 10 ng/mL human recombinant epidermal growth factor, 1 μg/mL hydrocortisone, 50 μg/mL gentamicin, 50 μg/mL amphotericin B, 12 μg bovine brain extract and 2% v/v fetal calf serum (FCS) for three days and used in passages 3–6.

RNAi Design and Preparation and transfection of siRNAs

Fgl2 RNAi or GFP virus were provided by Jikai Company. Briefly,the nucleotide sequences of hFgl2(NM_006682) were found in the GeneBank.Tatget sequence of Fgl2 gene (Forward:5′- CCGGCACGTCCAGTTCAACATCTAATTCAAGAGATT AGATGTTGAACTGGACGTGTTTTTG- 3′,Reverse:5′- AATTCAAAAACACGTCCAGTTCAACATCTAATCTCTTGAATTAGATGTTGAACTGGACGTG- 3′.) could be effectively scilenced with RNA interference were confirmed. The cDNA containing both sense and antisense Oligo DNA fragements of target sequences were designed and cloned into the pGCSIL-GFP vector which was digested by AgeI/EcoRI.The obtained lentiviral vector containing Fgl2shRNA was confirmed by digestion and sequencing. Using lentiviral vector pHelper 1.0 pHelper2.0 pGC-LVFgl2 to transfect 293T cells,then the lentivirus were collected.The titer of virus was tested according to the expression level of GFP. Titers of the virus stocks were routinely 1×109 transduction units (TU) ml−1.

Cell migration assay was performed using boyden transwell chambers.Briefly, 200 μl DMEM containing 10% FBS was added to the bottom well. Cells were resuspended in the appropriate buffer at a concentration of 5×105 cells/ ml and 500 μl cell suspension was added to the top well of transwell chambers.Between the bottom well and the top well, there was the filter (pore size: 8 μm). After incubation at 37 ◦C in 5% CO2 condition, the cells that had not migrated were removed from the upper surface of the filters using cotton swabs, and those that migrated to the lower surface of the filters were fixed in methanol and stained with 0.1% crystal violet. Migration was determined by counting the cell number with a microscope at 400×. Five visual fields were chosen randomly for each assay. The average number of the migrating cells in five fields was taken as the cell migration number of the group. The assays were repeated three times. Data are presented as relative migration (number of cells/high power field) and represent mean±standard error.

Values presented are the mean±S.E.M. Comparisons between two groups were performed using Student’s t-test; three or more groups were compared by analysis of variance followed by the Newman–Keuls test. P values less than 0.05 were considered significant. 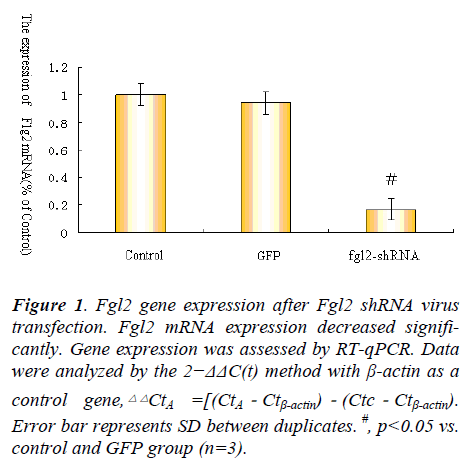 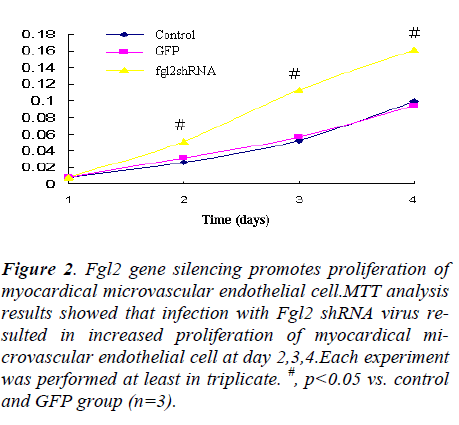 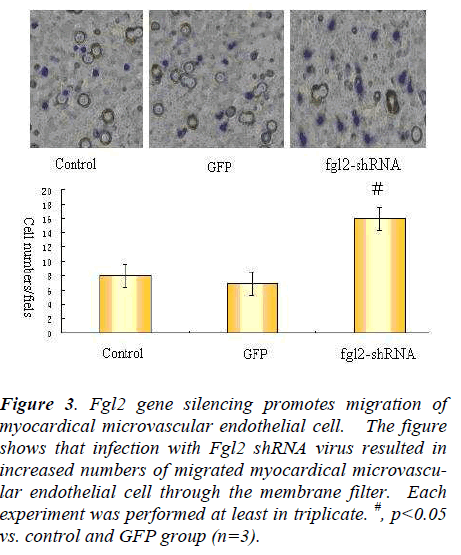 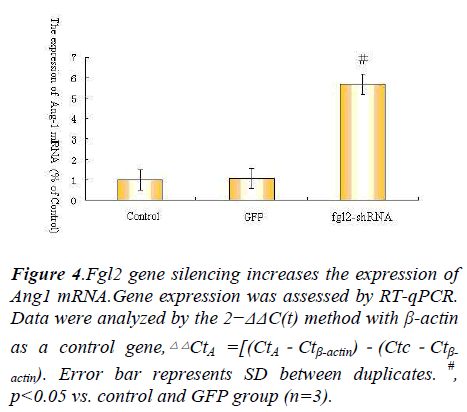 Figure 4. Fgl2 gene silencing increases the expression of Ang1 mRNA.Gene expression was assessed by RT-qPCR. Data were analyzed by the 2−ΔΔC(t) method with β-actin as a control gene, 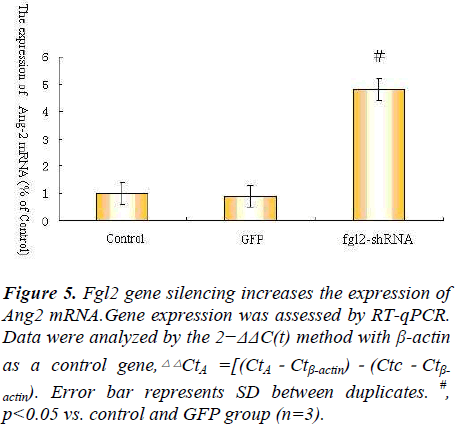 Figure 5. Fgl2 gene silencing increases the expression of Ang2 mRNA.Gene expression was assessed by RT-qPCR. Data were analyzed by the 2−ΔΔC(t) method with β-actin as a control gene, 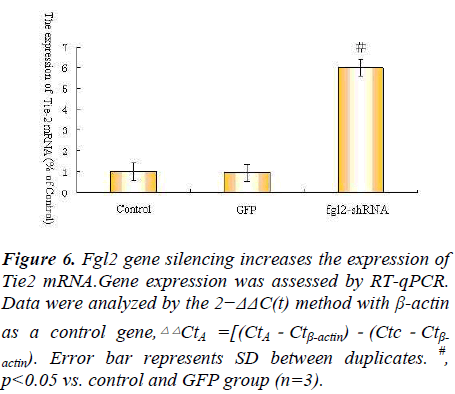 Figure 6. Fgl2 gene silencing increases the expression of Tie2 mRNA.Gene expression was assessed by RT-qPCR. Data were analyzed by the 2−ΔΔC(t) method with β-actin as a control gene,

In order to determine the proliferative effects using MTT assay. Myocardical microvascular endothelial cell infected with Fgl2 RNAi resulted in decreased expression of Fgl2 mRNA and significantly increase myocardical microvascular endothelial cell proliferation compared to the control and group infected with GFP virus (Fig. 2).The effects were significant at 2,3,4 days,and the effect reach the maximum at day 4, which suggested that Fgl2 RNAi can promotes cell proliferation.

In the present study, we investigated the expression of hFgl2 mRNA after Fgl2 RNAi transfection in myocardical microvascular endothelial cell,we found that Fgl2 mRNA expression decreased significantly after Fgl2 RNAi transfection. In addition,the proliferation and migration of myocardical microvascular endothelial cell increased significantly at the same time.The results showed that Fgl2 is a target to regulate cell proliferation and migration, which indicated that Fgl2 is involved in angiogenesis.

The angiopoietin/Tie system plays critical roles in embryonic vascular development and maintenance of normal adult vasculature. [12,13,14] Previous study demonstrate that over expression of Ang1 in mice can increase vascularization in the skin, and activation of angiopoietin/Tie2 signaling pathway can lead to excessive angiogenesis. [15,16.]. Defects in Tie2 are known to affect vascular development in humans. An activating mutation in the intracellular kinase domain of human Tie2 gene has been implicated in one form of inherited cutaneo-mucosal venous malformations, demonstrating the critical function of Tie2 in proper vascular development. [17] Whether the angiopoietin/ Tie system is involved in the process which Fgl2 control cell proliferation and migration is still unknown. This study has identified the Fgl2 as molecular regulators associated with the pathogenesis of cell migration and proliferation,which is involved in angiogenesis. The decreased Fgl2 mRNA levels result in increased Tie2, Ang1, and Ang2 gene expression in myocardical microvascular endothelial cell may contribute to the abnormal growth and remodeling of vasculatures in ischemia heart diseases.The possible mechanism may be that the angiopoietin/Tie system activation is involved in the process.

In summary, Targeting Fgl2 gene may prove to be effective anti-angiogenic or angiogenic therapy for preventing ischemia heart diseases. The preliminary data need to be well discussed and further study surely continued. Further study of Fgl2 will provide clues for better understanding its function and may help uncover novel therapeutic strategies for treating ischemia heart diseases.

This work was supported by a grant from the National Nature Science Foundation of China (No. 30960119) and the Technology Support project of Jiangxi province (NO. 2010BSA12000).