Fetal anomalies detection in China by screening with ultrasound

Patients and Methods: Amid the reporting period from August 2007 to July 2014, prenatal fetal anomaly diagnosis in 9524 fetuses/babies were inspected and contrasted with post-natal diagnosis.

Screening with ultrasound on routine basis during second trimester was a segment of maternity healthcare in various developing countries. In China, pregnant women undergo maternal-fetal medicine ultrasound screening ahead of schedule in the second trimester, and it will be conducted by radiologists and obstetricians and infrequently by midwives, who received special training [1-4]. The efficacy of ultrasound test for fetal anomalies depends on various factors, like gestational age, experience and skillset of operators, equipment, and possibility of repeat scan [3,5,6]. At first, the fundamental explanations behind routine ultrasound test were evaluating age at gestation, assessing the viable fetus number and research of placenta. At present, fetal anomalies screening, utilizing a checklist has turned into a vital part of the test at the greater part of obstetrical offices.

Pre-birth identification of fetal anomalies varies from 17% to 85% [7,8]. Greater contrasts in study setting crucially affect sensitivity. Most of the studies were conducted in tertiary care centers [3,7-10], that might give distinctive rates of identification than small healthcare centers with respect to prevalence, resources, and competency in detection of anomalies. The Helsinki Ultrasound Trial demonstrated huge contrasts in prenatal identification rates of major abnormalities at tertiary care center in comparison with city local hospital [11], whereas other studies demonstrated that individual clinics can accomplish identification rates comparably with that of tertiary centers [12,13]. A large portion of these studies were publicized or based upon information gathered over 10 years prior. Notwithstanding information in the field, the specialized equipment and conceivable outcomes for distinguishing chromosomal anomalies have enhanced throughout the years, so consequent studies might demonstrate high recognition rates.

The major goal of the present study was to correlate sonographic findings of fetal developmental abnormalities resulting from chromosomal aberrations and structural anomalies in a tertiary hospital in China.

This single-center retrospective cross-sectional study was performed at a tertiary hospital, China over a period of seven years from August 2007 to July 2014, and incorporated all delivered babies at the hospital, and those delivered at different hospitals as a result of a prenatal fetal anomaly diagnosis in our hospital. Also included were lost fetus by pregnancy termination, miscarriage, or intrauterine death with fetal anomalies detected through ultrasound in our hospital. All the fetuses incorporated in present study have gone through ultrasound test at the hospital prior to 22 gestation weeks. The overall study population included 9524 fetuses as well as newborns. The Institutional ethics committee approval was acquired for the present study, and patient confidentiality was strictly maintained.

All the pregnant women>34 years of age, those having riskfactors apart from advanced maternal age, and those with ultrasound tests showing chromosomal abnormalities were provided chromosomal analysis post 15 gestational weeks apart from the standard ultrasound exam in second trimester. From 2007 until May 2010, all pregnant women>34 years of age were principally provided amniocenteses. Beginning May 2010, these pregnant women were at first given first trimester ultrasound test screening for 21, 18, and 13 trisomies, respectively along with nuchal translucency thickness, pregnancy associated plasma protein A and serum free β human chorionic-gonadotropin assessments at 11 to 13 gestation weeks for evaluation of chromosomal abnormality probability. Further chromosomal analysis was done with greater probability (>1/200).

Post birth, all the new-borns were routinely analysed by doctors and were followed-up with respect to congenital anomalies until their discharge from post-natal care or till last diagnosis.

All fetuses/babies were allocated just a single anomaly diagnosis though multiple abnormalities were presented, unless it doesn’t come under multiple malformations sequence/ syndrome. In case of multiple abnormalities, the fetuses/babies were allocated primary diagnosis of the anomaly, considered by authors to be of clinical significant. Chromosomal anomalies were constantly viewed as superior to the structural malformations in babies with irregular chromosomes, aside from balanced chromosomal variations, that were considered to be normal chromosomally. Minor structural anomalies that were not under consideration in present study were hip instability & luxation, hemangioma and non-neoplastic nevus, hydronephrosis (<5 mm), inguinal hernia, preauricular appendage, persistent ductus arteriosus, polydactyly, persistent foramenovale (with spontaneous regression), retention testis, and syndactyly.

An anomaly was deemed to have been identified by ultrasound during pregnancy, when the anomaly was initially suspected when the ultrasound diagnosis was in sensible agreement with that of definitive diagnosis, regardless of the possibility that the last analysis was not made until some other time. A chromosomal anomaly was deemed to be diagnosed only post performance of fluorescence in situ hybridization or fetal karyotyping and confirmation of abnormal chromosomes. The speculated anomalies were deemed to be false +ve if they couldn’t be affirmed post birth, pregnancy termination or miscarriage, even during anomaly regression cases like pleural effusion/hydronephrosis. The structural anomalies in fetuses/ babies with normal chromosomes were categorized as per organ systems and as major/minor with regards to clinical significance. The contrast of minor as well as major was done as a team, with pediatric doctor with direction from proposition by Royal College of Obstetrics and Gynecology in 1997 [15].

The specificity, sensitivity, prevalence, Positive (PPV) as well as Negative Predictive Values (NPV) and False Positive Rate (FPR) with respect to chromosomal and structural anomalies were computed. The computations were conducted per baby, not as per anomaly. Prevalence was described as the no. of fetuses/babies with affirmed diagnosis of anomalies divide by aggregate number. The sensitivity was described as the no. of fetal anomalies identified prior to delivery and affirmed post birth divide by aggregate number of affirmed irregular fetuses. To measure the sensitivity for identification of fetal anomalies using standard ultrasound exam, we utilized the no. of affirmed anomalies identified prior to 22 gestation weeks, except for anomalies identified by 1st trimester ultrasound exam, divide by aggregate of affirmed irregular fetuses. A FPR was characterized as no. of fetuses getting prenatal anomaly diagnosis that couldn’t be affirmed post birth divide by aggregate of fetuses getting prenatal anomaly diagnosis. Statistical analysis was conducted using Microsoft Excel Professional Plus 2010.

Amid the reporting period, 9466 babies were delivered at our hospital, and 16 babies were delivered at different hospitals in light of anomaly detection amid pregnancy through ultrasound test conducted in our hospital. Additionally, incorporated into the review were 39 fetuses having anomalies diagnosed at our hospital even though these pregnancies were ended later. Two babies were miscarried yet were determined to have expanded nuchal translucency thickness prior to miscarriage. Those two fetuses got anomaly diagnosis post-mortem. Furthermore, one fetus likewise incorporated into the review had an ordinary standard ultrasound examine yet died in utero and was determined to have a chromosomal anomaly post-mortem. An aggregate of 9524 fetuses composed of study population. The Figure 1 depicts the analysis of 9524 fetuses with regards to fetal anomalies identification. The mean age of the pregnant women was 31.5 years (range: 16 to 51 years). 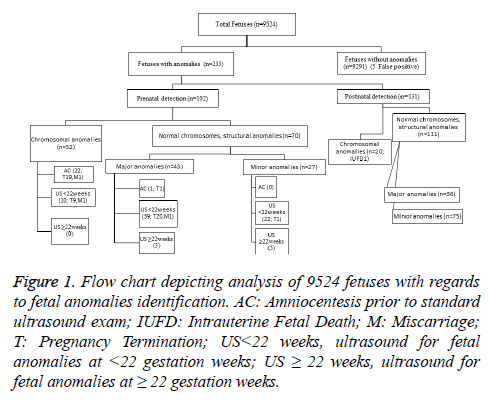 Notwithstanding the 102 prenatal identified fetuses, other five fetuses got prenatal fetal anomaly diagnosis which couldn’t be affirmed post birth and were characterized as false positives, with FPR of 4.67% (5/107).

Overall, 49.02% (50/102) of prenatal detected anomalies caused in pregnancy termination. In fetuses having chromosomal anomalies that identified prenatally, there were 87.5% (28/32) of pregnancy terminations; with extra two fetuses lost via miscarriage, and one death in utero. In case of structural anomalies in normal chromosome fetuses, 31.43% (22/70) of pregnancies were ended, with extra one fetus lost via miscarriage.

Our study demonstrated fetal anomaly identification rate of 40.34%, when recognized prior to 22 gestation weeks, and an extra 3.44%, when distinguished between 22 weeks and birth. Huge contrasts in study centers with following huge contrasts in pre-natal detection rates of 17% to 85% ranges [6,16], at times make general detection rate comparisons between studies hard. Elements like operational skills, gestational age, aggregate of standard exams rendered, specialized equipment utilized, the post-natal follow-up, and the choice and interpretation of anomalies incorporated, all crucially affect the prevalence as well as pre-natal detection rates.

The strength of present study is nonselected pregnant women population from an all-around characterized region where around 95% of pregnant women residents of area eventually give birth at our hospital. Our hospital is the main centre in the region with ultrasound setup as well as delivery department, allowing close follow-up of all babies. This quality is upheld by the predominance of congenital anomalies in present study. Certain inherent limitations need to be considered during interpretation of the results, as the study being a retrospective one.

The rationale for distinction of detection rates for major as well as minor structural anomalies is that great predominance of minor anomalies of low clinical significance can considerably influence overall identification rate. In this study, atria septum defect (n=8), ventricle septum defect (n=18) as well as hypospadias (n=23) record for a greater part of minor structural anomalies that weren’t identified prenatal. To distinguish prenally an open foramen-ovale in a normal fetus from genuine pathological atria septum defect or detection of ventricle septum defect is exceptionally troublesome, and hypospadias are probably not going to be distinguished on the grounds that sex was not routinely inspected in singleton pregnancies in present study. A few reviews do exclude one or a few of these anomalies, which might give a greater pre-natal detection rates [3,5-7,10]. In different reviews, the quantities of these abnormalities are not pronounced, or it is impractical to figure out if they are incorporated [13,19]. The revealed prevalence of these anomalies was likewise significantly higher in present study than in numerous different reviews [6,9,10,12,20]. With those anomalies excluded, the aggregate sensitivity for prenatal identification of fetal anomalies raises from 43.64 to 56.35% in present study.

In a routine clinical setting at a hospital, half of major structural abnormalities in fetuses with normal chromosomes are identified by standard ultrasound exam. Advancement in identification of cardiac anomalies is required. Chromosomal anomalies have the greatest probability for prenatal detection than structural anomalies in normal chromosome fetuses. Now a days, the greater part of chromosomal anomalies identified prenatally are diagnosed by amniocentesis prior to standard ultrasound exam in 2nd trimester in high risk women.