Fatal gastrointestinal bleeding and perforated duodenal ulcer: a rare complication of deferasirox in a patient with liver cirrhosis

We report here a case of deferoxamine (DFX) related gastrointestinal bleeding and duodenal perforation in a cirrhotic patient after the use of deferasirox for secondary hemochromatosis. Duodenal ulcer bleeding and perforation is noted as a rare adverse event in the scientific product information of deferasirox, in our current knowledge, this is the first case-report on this adverse drug reaction at adult patients. Clinicians must be aware that deferasirox use in a cirrhotic patient may have a potential risk of complicated gastrointestinal ulceration. It is recommended that patients undergoing treatment with deferasirox especially with liver cirrhosis are monitored regularly for adverse events.

A 69-year-old female was diagnosed with haemolytic anaemia and subsequently received multiple red blood cell transfusions (36 units in two year) at another hospital. She was sent our clinic for the suspicion of chronic liver disease. Patient was hospitalized. She had type 2 diabetes mellitus (DM) and metabolic syndrome. She was using subcutaneous insulin analogues; amlodipine besilat and proton pump inhibitor. The body mass index of the patient was 32. No active alcohol or illicit drug use was reported. Laboratory studies revealed that AST/ALT levels were 87/65 U/L respectively. Ferritin levels were 2480 g/L, Fe was 150 μg/dL and total iron binding capacity was 90 μg/dL and transferrin saturation was 55%. Ultrasound of the liver revealed a heterogeneous parenchyma structure, an irregular edge and grade III steatosis, spleen length was 140 mm. Gastroscopy showed grade 1 esophageal varices, without other pathological features. Other reasons that may lead to cirrhosis were investigated. Chronic viral hepatitis panel for hepatitis B and C were negative. The laboratory tests for Wilson disease, hemochromatosis and α1-antitrypsin deficiency were unrevealing. Hemochromatosis gene analysis (C282Y and H63D mutations) was negative. Magnetic resonance imaging demonstrated decreased signal intensity in the affected liver parenchyma on the in-phase images compared with the out-of-phase images (Figure 1). Child and MELD scores of the patient were 6 (A) and 10 respectively. We decided that the reason of chronic liver disease could be the combined effects of nonalcoholic steatohepatitis and secondary hemochromatosis due to excessive blood transfusion which caused iron overload. The cause of anemia was investigated. Laboratory studies about hemolysis showed that the haptoglobulin level was very low and LDH and indirect bilurubin leves were high. Coombs test was positive. Serological markers for anti-nuclear antibody (ANA), Epstein Barr virus and cytomegalo virus were negative. We decided to start deferasirox at a dose of 1 g/day for secondary hemochromatosis. Two weeks later after starting deferasirox she was admitted to our institution with abdominal pain and melena. She denied any use of nonsteroidal anti-inflammatory medications, acetylsalicylic acid, bisphosphonates, antibiotics or other medications. Laboratory studies showed anemia (Hgb 5.7 mg/dl) and leukocytosis (21400/mm3) with a neutrophil predominance. Kidney functions were normal. Upper gastrointestinal endoscopy revealed a large ulcer at the bulbus of the duodenum which expands till the second part of the duodenum. There was no active bleeding but a large fixed coagulum at this area. There is no sign of variceal bleeding. Pantoprazole infusion was started and 4 units of red blood cell transfusion were given. The day after, her abdominal pain persisted; at physical examination rebound tenderness was observed. Abdominal X Ray scan showed subdiaphragmatic free air (Figure 2). Emergency surgical consultation was done but she was transferred to the intensive care unit because of the hypovolemic shock before the surgical operation. A diagnosis of deferasirox-induced gastrointestinal bleeding and perforation was therefore made. The patient was unresponsive to the intravenous fluids infusion of and to the vasopressive treatment. The patient died before emergency surgery could be performed. 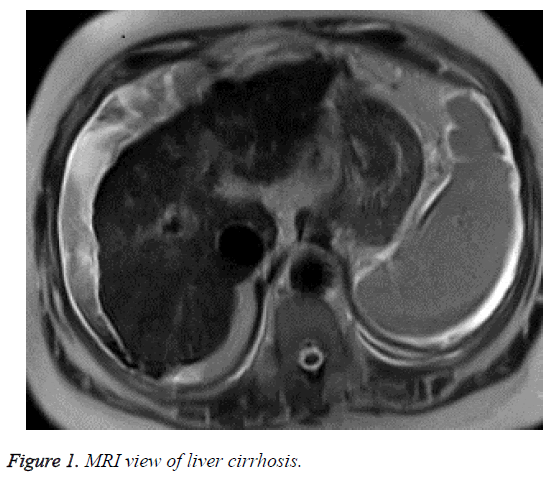 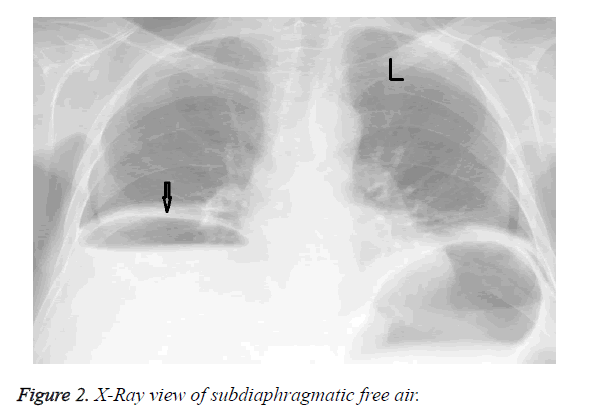 Long-term transfusion therapy leads to iron overload and results in significant morbidity and mortality if left untreated [15]. Using iron-overload chelation therapy improves patient survival [16,17]. Deferasirox is highly selective for ferric iron, with which it forms a stable complex in a 2:1 ratio. The deferasirox-ferric iron is eliminated predominantly through feces. Its high bioavailability and long half-life means it is suitable as a once-daily oral treatment [18]. In the literatüre, in relation to about advers effect deferasirox, Huang et al., found significant higher risk of GI bleeding associated with deferasirox use [19].