We have read with much interest the recent expert consensus by Lloyd-Jones et al. [1] on the role of non-statin therapies for LDLF- cholesterol lowering. They have reinforced and expanded the recommendations for the use of non-statin therapies for patients with high LDL from their earlier published guidelines in 2013. In particular, the role of genetically determined disease is plainly stated and emphasized in the subgroup of patients with high risk for cardiovascular disease. Those patients have primary severe elevations of LDL-C = 190 mg/dL, and are more likely to have genetic heterozygous (HeFH) or homozygous (HoFH) familial hypercholesterolemia. In the opinion of the Expert Consensus Writing Committee, in such patients who fail statin mono-therapy (<50% reduction in LDL-C), it is reasonable to take advantage of the greater LDL-C lowering effect of PCSK9 inhibitors as a first step treatment. Inadequate response to such therapies supports the use of mipomersan, lomitapide or LDL apheresis. This allows the use of the PCSK9 inhibitor (evolocumab) before committing to LDL apheresis in phenotypic HoFH patients unless a “receptor negative” mutation has been documented.

In Lebanon, most of the familial hypercholesterolemia patients have a founder LDLR mutation with high demographic burden for the disease. We have previously identified in one cohort 18 different families with the homozygous mutations c.2043 C>A (p.C681X) in LDLR accounting for almost 50% of all families with clinically identified FH (Table 1) [5].

These patients presented with an average LDL-C level of 493 mg/dl (ideal below 100 mg/dl) and typical signs and symptoms of familial hypercholesterolemia. They were managed with apheresis after their failure to respond adequately to statin therapy. Our finding on the genetic basis of the disease in Lebanon puts a red flag on the consensus’s opinion to provide non-statin therapy before going into apheresis. We expect failure of therapy to occur in 45% of the clinically identified FH patients in Lebanon, who will be harbor an underlying homozygous “negative receptor” mutation (Figure 1). 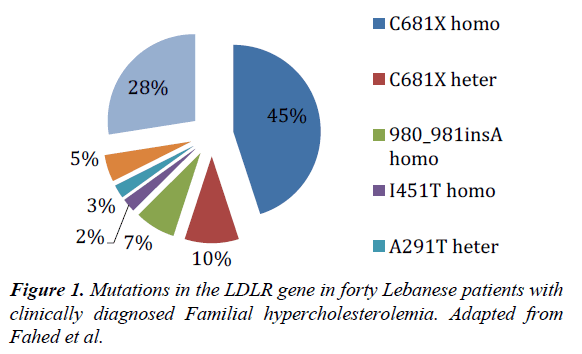 This effect might not be seen in other countries as population studies in South Africa, Netherlands and Italy failed to show such a drastic disease-linked mutation [6-8]. We recommend population based understanding of the disease prior to drug use. In populations where there is high risk of therapy failure, and where a recurrent founder mutation is of the negative receptor type, genetic screening on individual basis before therapy trial should thus be indicated.