Conclusions: PDB extracts exhibit protective role in streptozotocin induced β cell injury model. The mechanism may be related to increased phosphorylation of Fox O1, which increases the number and improves the function of β cells.

Diabetes Mellitus (DM) is a metabolic disorder characterized by systemic control of glucose dysfunction and insulin secretion imbalance. The prevalence of diabetes in Chinese adults has risen to 11.6%, accounting for 1/3 of the number of patients worldwide [1]. According to data released by WHO, diabetes has become the third major disease that threatens human health following cancer and cardiovascular diseases. Islet β cells are the only cells that secrete insulin, the maintenance of normal amount and function of insulin is necessary for the body to secret adequate insulin to maintain the balance of the body. Streptozotocin (STZ) is a compound derived from Streptomyces achromogenes that has been used for the treatment of pancreatic β cell carcinoma. Due to its toxicity to islet β cells, STZ has been used to induce cell or animal model of diabetes [2].

Potentilla discolor Bunge (PDB) is a Rosaceae plant with various effects such as clearing heat and detoxicating, curing dysentery to arrest hematochezia. In diabetic rat model, PDB not only significantly reduced blood glucose but also promoted the repair of β cells and the release of insulin [5]. This study aimed to investigate whether PDB extracts could protect islet β cells and promote cell proliferation and insulin secretion. We established STZ induced damage to RIN-m5f cells as the model and examined the effects of PDB extracts.

Rat RIN-m5f β cells were provided by Collection Center at Wuhan University and cultured in RPMI1640 medium supplemented with 10% fetal bovine serum, penicillin (100 U/ml) and streptomycin (100 mg/ml) at 37°C in a humidified atmosphere containing 5% CO2 and 95% air. The medium was changed every two days. Cells were used when they were at the logarithmic phase of growth.

Cells were treated with 0.25, 0.5, or 1 mg/ml PDB extracts for 48 h. The culture medium was collected and insulin content was determined by using ELISA kit according to the manufacturer’s instructions.

Cells were treated with 0.25, 0.5, or 1 mg/ml PDB extracts. The cells were collected and total protein was isolated from the cells and quantitated by BSA method. 30 μg protein was loaded onto a 10% Sodium Dodecyl Sulfate Polyacrylamide Gel Electrophoresis (SDS-PAGE) and transferred to Polyvinylidene Difluoride (PVDF) membrane. Next, the membrane was incubated with specific antibody for FoxO1, p- FoxO1 or β-actin at 4ºC overnight, followed by incubation with secondary antibody for 1 h at room temperature. The membrane was developed using ECL kit (Pierce, Rockford, IL, USA) and exposed to X-ray film. Bands on the films were analysed by Image.plus5.1.

The data were expressed as ͞x ± s and analysed by SPSS 17.0 software. ANOVA was used to compare the differences among the groups. P<0.05 indicated that the difference was statistically significant.

As shown in Figure 1, the number of cells in STZ injury group was significantly lower than that in the control group (P<0.01). Compared with the injury group, 0.25, 0.5 and 1 mg/ml PDB extracts could increase the number of cells in a dose-dependent manner and the differences were significant (P<0.01). These results suggest that PDB extracts effectively repair STZ induced β-cell injury. 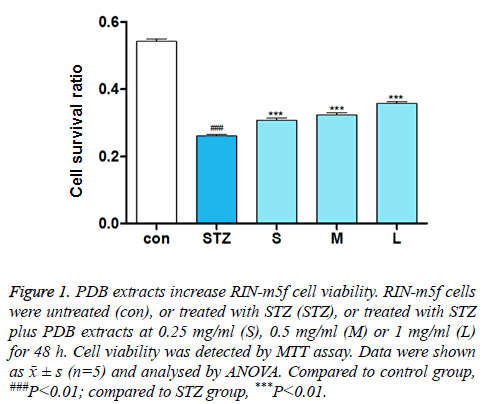 PDB extracts promotes the secretion of insulin by RIN-m5f cells 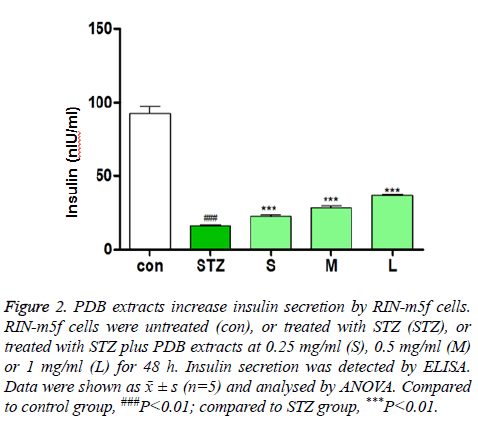 PDB extracts promotes the phosphorylation of FoxO1 in RIN-m5f cells 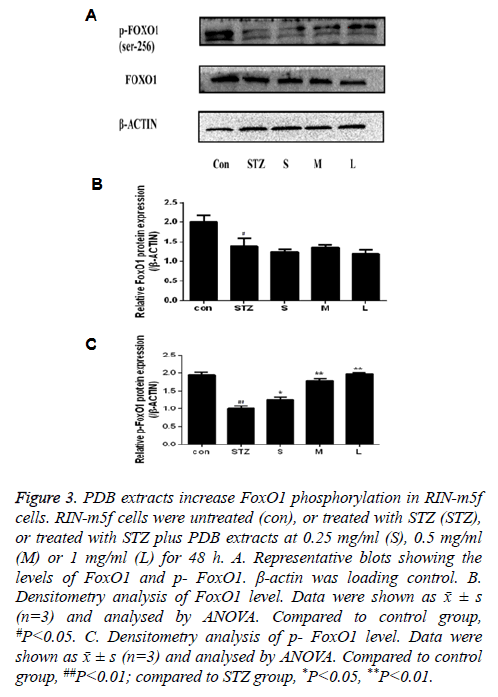 The damage model of islet cells is mostly induced by high glucose stimulation or STZ treatment [6-9]. The action time of STZ is shorter than high glucose stimulation, and the damage is obvious. Therefore, this study used STZ (4 mmol/L) to induce RIN-m5f β-cell injury model. Maintaining the number of β cells and protecting β cell function is the key to prevent the occurrence and deterioration of type 2 diabetes [10,11]. In this study, we found that PDB extracts could effectively prevent the damage of STZ to the survival and insulin secretion of RIN-m5f β-cells in a dose-dependent manner.

PI3K/AKT signaling pathway is involved in the regulation of the number and function of β cells [12,13]. PI3K/AKT signaling promotes Fox O1 phosphorylation, and phosphorylated Fox O1 could induce β-cell differentiation and insulin secretion, and protected the number and function of β cells [14]. In this study, we found that the expression of FoxO1 and p-FoxO1 in STZ injured β cells decreased, but PDB extracts increased p-FoxO1 level in β-cells in a dose-dependent manner. Therefore, PDB extracts may promote β cell differentiation and insulin secretion by affecting the phosphorylation of Fox O1.

In conclusion, this study demonstrated that PDB extracts exhibit protective effect on STZ damaged RIN-m5f cells, they increase the number of β cells and promote the release of insulin and the phosphorylation of Fox O1. However, the potential efficacy and possible side effects of PDB in diabetes patients remain unclear. Further clinical trials are needed to confirm the utilization of PDB extracts for the prevention and treatment of diabetes.