Penicillin was discovered by Sir Alexander Fleming in the study of influenza virus in Staphylococcus aureus by accident that the environment surrounding the blue fungus (Penicillium chrysogenum) in the incubator was aseptic [1]. Hans has developed a special staining method [2] and divided bacteria into two groups which were differed in their cell wall structure later.

Several food-born pathogenic bacteria are well identified [3-9]. Among them Staphylococcus aureus is Gram-positive (+) bacteria and causes serious illness including osteomyelitis, meningitis and neuralgia, vomiting, diarrhea in humans and animals [3]. Staphylococcus aureus is infected mainly via nose and respiratory system caused food poisoning. Other severe food-born Gram (+) bacteria is Bacillus cereus which is large bacilli which arranged in the form of a chain [4]. Because it can cause food poisoning by forming strong spores on heat, it is necessary to sterilize by high temperature. An environment in which the bacterium can grow well and when it is above 106 CFU/g, it causes diarrhea and vomiting. One of the severe food-born Gram-negative (-) bacteria is Salmonella typhimurium which is rod-shaped bacteria and infects mainly in the digestive tract of people and warm-blooded animals causing typhoid fever and enteritis [5]. Recently, problems of pathogenic Escherichia coli have been reported [6]. E. coli discovered in 1885 by Theodore is easily reproduced, genetically comparatively simple and easy to manipulate [7]. Therefore, E. coli is the most studied prokaryotes and is greatly contributed to biotechnological progress. Most E. coli strains are not harmful often seen in the intestines of warm-blooded animals and benefits to the human body for vitamin K generation [8]. Some pathogenic E. coli cause food poisoning including urethral infection caused by elderly people or patients who have lowered immunity after surgery and traveller’s diarrhea [9]. One of the well-studied pathogenic E. coli is E. coli O157:H7 which produces shiga-like toxins [6].

Oxalis triangularis is a perennial grass native in tropical Mexico and an ornamental plant in purple color which can be decorated for salads or foods. It is resistant to severe environment of high temperature and draught due to bulbous roots [10]. Oxalis corniculata, so called cat eaten plant in Korea, is different in color in green and smaller size compared to O. triangularis. The organic compound oxalic acid is isolated by François, Switzerland in 1773 from the wood-sorrel including plant O. corniculata and its crystal structure is revealed recently [11]. The oxalic acid is highly acidic which its pKa is 1.25 and 4.14 because it contains two carboxylate moieties [12]. Some plants such as parsley, chives, purslane, cassava as well as wood-sorrel (oxalis) contain high concentration of oxalic acid over 1% [13]. The oxalis substitution over banana leaves has largely eliminated the food poisoning of bongkrek in Indonesia because the oxalis leaves contribute to decrease of pH which prevents bacterial overgrowth [14]. The kidney stone is usually caused by calcium oxalate, one of the common oxalate compounds [15]. Color-pigmented plants such as carrot, pepper, paprika etc. harbor rich antioxidants and vitamins which help health to maintain a harmonious diet and a healthy lifestyle.

In this research, from some ethnobotanical evidences of oxalis plants treated in local traditional medicine, antimicrobial activity against various pathogenic bacteria was studied in the extracts of O. triangularis in heat-treatment or various pH value. The antimicrobial substance of O. triangularis was not previously suggested to oxalic acid or oxalate compounds which are heat-stable and affected by pH.

The plant samples of pepper, garlic, blueberry, ginseng, paprika, ginger, cinnamon, rosemary and O. triangularis were purchased from local market in Jeju, Korea. The O. triangularis was grown in the plant growth chamber at 25°C with a diurnal cycle of 12 h light/12 h darkness [16].

Eight bacteria [(S. aureus (KCTC 1621), B. cereus (KCTC 1021), B. sphaericus (KCTC 1185), S. pyogenes (KCTC 3096), S. mutans (KCTC 3065), E. coli (KCTC 1682), S. typhimurium (KCTC 2057) and E. aerogenes (KCTC 2190)] were ordered from Korean Collection for Type Cultures (KCTC) and inoculated in LB broth (Sigma-Aldrich, Germany) and incubated at 37°C for 24 h. The bacteria were spread out on the LB agar (Sigma-Aldrich, Germany) evenly using triangular glass rod sterilized by flame. The plant samples of pepper, garlic, blueberry, ginseng, paprika, O. triangularis, ginger, rosemary and cinnamon in a -80°C freezer were crushed and the liquid of supernatant from the crushed samples was extracted after centrifuge at 6,000 rpm for 5 min. The leaves, stems, roots, and buds from O. triangularis were divided by blade and the extracts were collected after centrifuge at 6,000 rpm for 5 min. Antibacterial activity of each extract was tested by disk diffusion assay that the extracts were dropped on the bacterial lawn after spreading followed by drying [17,18]. Antibiotics such as ampicillin (Sigma-Aldrich, Germany, 25 μg/ml) or kanamycin (Sigma-Aldrich, Germany, 25 μg/ml) were used as positive controls. The diameter of the clear inhibition zone was measured after 24 h incubation.

The extracts of mashed O. triangularis leaves have been prepared with distilled water and divided in two tubes, and then one tube was heated with boiling water bath at 100°C for 1 min [19]. The antibacterial activity of the heat treated extracts was assayed as the non-treated extract as a control. 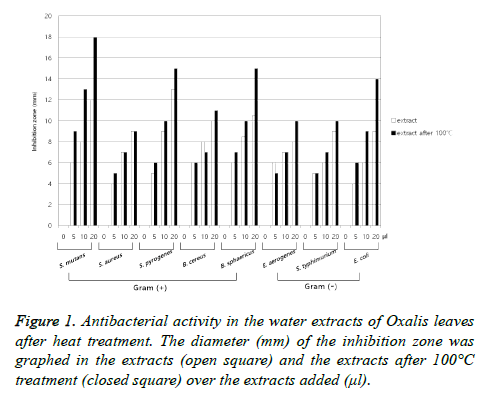 Figure 1: Antibacterial activity in the water extracts of Oxalis leaves after heat treatment. The diameter (mm) of the inhibition zone was graphed in the extracts (open square) and the extracts after 100°C treatment (closed square) over the extracts added (μl). 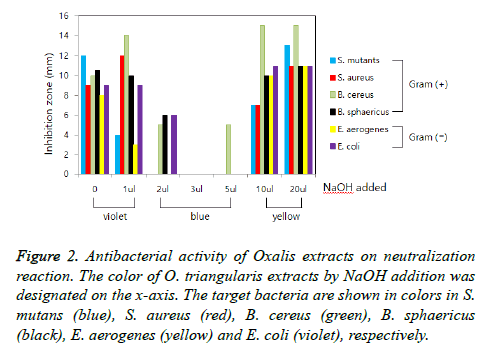 It is not excluded that other biologically active compounds in bactericidal activity rather than oxalic acid may be existed in the extracts of O. triangularis plants. The previous report revealed that the isolated antibacterial substances in the extracts of O. corniculata were 5-hydroxy-6, 7, 8, 4-tetramethoxyflavone and 5, 7, 4’-trihydroxy-6, 8-dimethoxyflavone [21]. It could be predicted that the concentration and pH effects by oxalic acid or oxalate salts would be affected to other biological activities such as antifungal or insecticidal effects [21]. The other viewpoint in the plant physiology is how the Oxalis plant cells maintain and resist in such a strong acidity. Based on the discovery of the natural antimicrobial effect derived from plants against both Gram (+) and Gram (-) bacteria, it can be used for prevention and treatment of various food poisoning, tooth decay or livestock or crop diseases caused by pathogenic bacteria, It is also applied to reduction of odor in piggery, barn or henhouse.

We would like to thanks Korean Collection for Type Cultures (KCTC) for providing bacterial stains. This study was supported by Science focused school program from Korea foundation for the advancement of science and creativity and Ministry of education, Republic of Korea. We thanks to Soo- Jin Kang of Namnyeong High School and Bang-Ja Ko, Yun-Ji Kang and Soo-Bin Yang of Hyodon Middle School for her helpful support and comments. We are grateful to Sustainable Agriculture Research Institute (SARI) in Jeju National University for providing the experimental facilities.